How to build a third hand

When I’m working on a circuit board, I typically hold it in a clamp, but I’ve found that sometimes I need a third hand for holding a wire in place. This design uses only three parts: 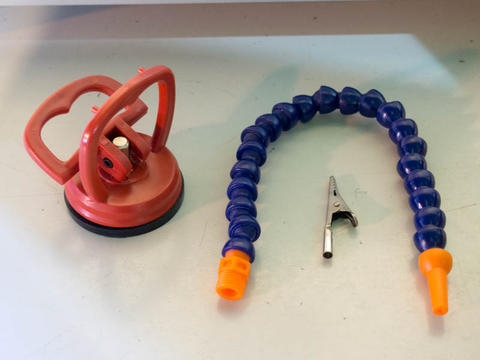 To mount the alligator clip on the end of the coolant hose, I enlarged the hole on the end of the hose to about 3/16”. At 3/16”, the clip didn’t quite fit in, so I moved the spinning drill bit around in the hole, gently enlarging it, until the clip could squeeze in. It fits very nicely. It’s quite snug, but can still be easily turned. It seems most people use much more complex methods of mounting the alligator clips. I couldn’t be happier with the fit, and and this point I see no reason to do anything more complex. I’ll follow up in a few months with a note on whether or not the connection remains tight in the long term. 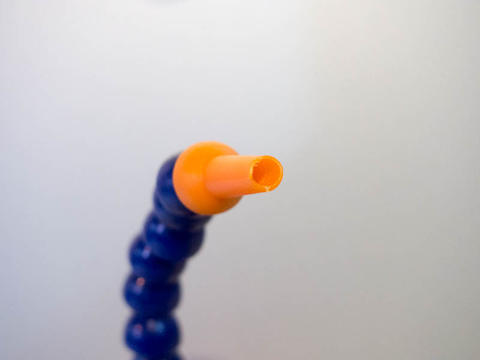 Next, drill a 1/2” hole in the base of the suction cup, being careful not to go to deep. Affix the coolant hose using super glue. I like to use the kind that can be brushed on. 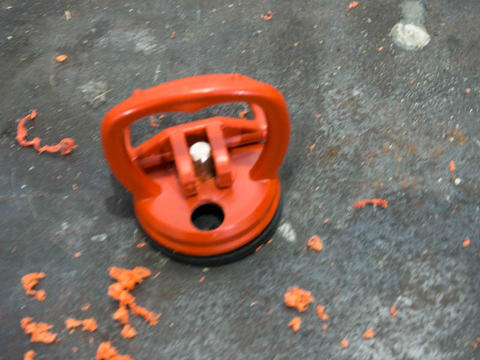 That’s all there is to it. The techniques are basic, but the result is sturdy. 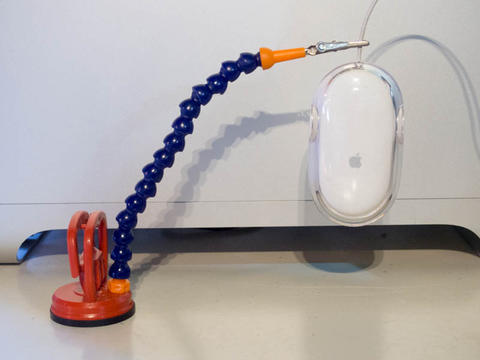 A Digital Readout (DRO) for Shopsmith

The Shopsmith's extension tables and varying height make it difficult to attach a rip scale. The newest model uses a removable magnetic strip. Unfortunately, Shopsmith changed the front rails to accommodate the rip scale, so to purchase the option for mine would cost $200.

Instead, I bought this digital readout from iGaging. At this writing, the price is $45. The readout can display in millimeters, decimal inches, or fractional inches to 1/64. I really like the 1/64 display for woodworking.

It's important that the DRO can be quickly removed, so that the Shopsmith can be converted to other uses. I have it attached with a clamp on the right and a magnet on the left. On the right, I'm using the included right angle bracket to clamp the encoder in place. The encoder is stationary and the scale slides with the fence. There's some flex in the bracket, but the magnet on the far end is capable of holding the scale square. I'd like to make a more rigid bracket that would clamp square to the table and provide a place to attach the display.

The only custom part in this setup is the bracket below. It connects to the fence's t track and provides the magnet for attaching the scale.

The magnet is attached with two nails, as screw heads would have protruded past the magnet. On the back is a homemade t-slot nut: a piece of aluminum with two holes tapped in it. I cut the nails off flush to the back of the MDF, but I was afraid they'd still scratch the fence, so I cut about an 1/8" off to make a gap between the bracket and the fence.

To calibrate the scale, I move the fence until it's just touching the blade, then zero it. I think a preferable method would be to move the fence an inch or two away from the blade, cut a board, measure it with the calipers, and then set the gauge to that value. I've seen a few discussions about using this DRO with an arduino, so I suspect it would be possible to build an interface with this feature.

With the current setup, my test cuts tend to be off by about .004" That's plenty accurate for everything I'm doing, and I suspect the imprecision has more to do with my abilities than with the DRO.

My metal bandsaw doesn't have a fence, but its cast iron table allows a magnetic one to be easily attached. I built the below fence using two scrap pieces of MDF, two hard drives magnetics, a sheet of paper, and a couple of nails and screws.

Screw heads were too big, so I attached the magnets with nails. Two magnets is definitely strong enough. One almost would have been enough, but the fence would have been too prone to pivoting.

Whether due to the magnets or imprecision in the cut, the fence wasn't quite perpendicular to the table, so I shimmed it with a piece of paper.

I've been using the fence to cut tiny pieces of metal, and it's more than sufficient for that purpose. The fence is sturdy enough that I'd feel comfortable using it on the Shopsmith bandsaw for resawing. My biggest reservation is that the magnets are so strong, I'm concerned I may bend it out of square when pulling it off the table.

A zero clearance insert on a miter saw (or any saw) is an insert that goes right up to the edge of the blade. You'd typically make one of these by starting with a blank insert and then cutting the opening for the blade after the insert is installed. Each insert you make is specific to each blade, and you can't vary the blade's bevel without altering the insert. The advantage to the inserts is that they give you a convenient edge for lining up your cut, and they reduce tearout (chipping on the bottom of the board).

I was looking for a zero clearance insert for my new Bosch CM8S, and came across this zero clearance tape by FastCap. The insert on a miter saw is slightly recessed, so there's room to apply a layer of tape over it, without causing interference. FastCap uses a "durable PVC tape". I considered electrical tape and duct tape, but the former has a tendency to curl and I was afraid the latter would leave a mess, so I tried painter's tape.

It seems to be working relatively well. I'm not getting any tearout on the door casings that I'm cutting, though I haven't tried any plywood. I imagine a firmer insert would do better in this regard. As far as providing a clear edge for lining up the cut, it's excellent.

I went to the Brown International Antique Tool Sale & Auction yesterday. It’s a pretty upscale event - in my experience, most tool sales don’t have security guards in suits. The main attraction tends to be hand planes, and in 2005 they sold one for $114,000. I attended the vendor sale yesterday (where prices tend to be a bit lower), but skipped today’s auction.

As anybody could tell you, if they read about the sale on AuctionZip, then clicked on the link to Brown’s website, read the sale description on the front page, then went to the ‘Brown Tool Auction” menu and selected “Auction Rules”, and then read to the last paragraph of the rules, there’s a $3 fee for admission. Brown does business “the Old-Fashioned Way with Service, Quality and Integrity”, so I’m sure this was an oversight.

It was worth the price of admission, though, even if just to see the Rotating Precision Cheese Knife:

I ended up buying a marking gauge and a set of trammel points. They were both $10, which made them two of the cheapest items at the sale, and among the few tools there that were practical for actual use. The marking gauge is a Stanley No 71. The marking gauge has a pin on the end of the post, used to scribe a line in wood. To use it, you slide the post so that the pin is your desired distance from the fence, then you slide the fence along the side of your board, so that the pin scribes a line parallel to the edge of the board, at your desired distance. This one has two posts, which seems to be a bit uncommon.

Trammel points are basically a compass. Set one point in the center, then you can scribe your arc. The extra knob on the left trammel point is for fine adjustment.

A couple years ago, I bought an abandoned house with an attached general store, built in 1911. I’ve been gradually fixing things up and learning a lot in the process. I’ve been doing more woodworking and a lot of research, and I’ve decided to start documenting what I learn here in the form of a blog.

My primary woodworking tool is a Shopsmith Mark V. The Shopsmith is a multipurpose tool that functions as a table saw, lathe, disc sander, drill press, and horizontal boring machine. There are also numerous attachments, such as a bandsaw and jointer, that can be mounted on it and powered by the Shopsmith headstock. The Shopsmith is often maligned because of the compromises inherent to a multifunction machine, but I’ve been very happy with it. If I had a two car garage that could serve as a dedicated workshop, I’d love to have a big cabinet saw and the walls lined with industrial tools, but my shop is in the dining room. I can’t work as quickly as I could with a full size shop, but the Shopsmith is completely capable of doing professional quality work. For a shop as small as mine, it’s the only practical option.

On the opposite side of the room from the Shopsmith is my workbench. Right now, it’s just a sheet of MDF on a pair of saw horses. I’m planning to build a more permanent workbench and have been looking at a lot of plans, but haven’t decided on anything yet. 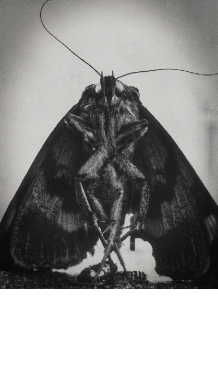