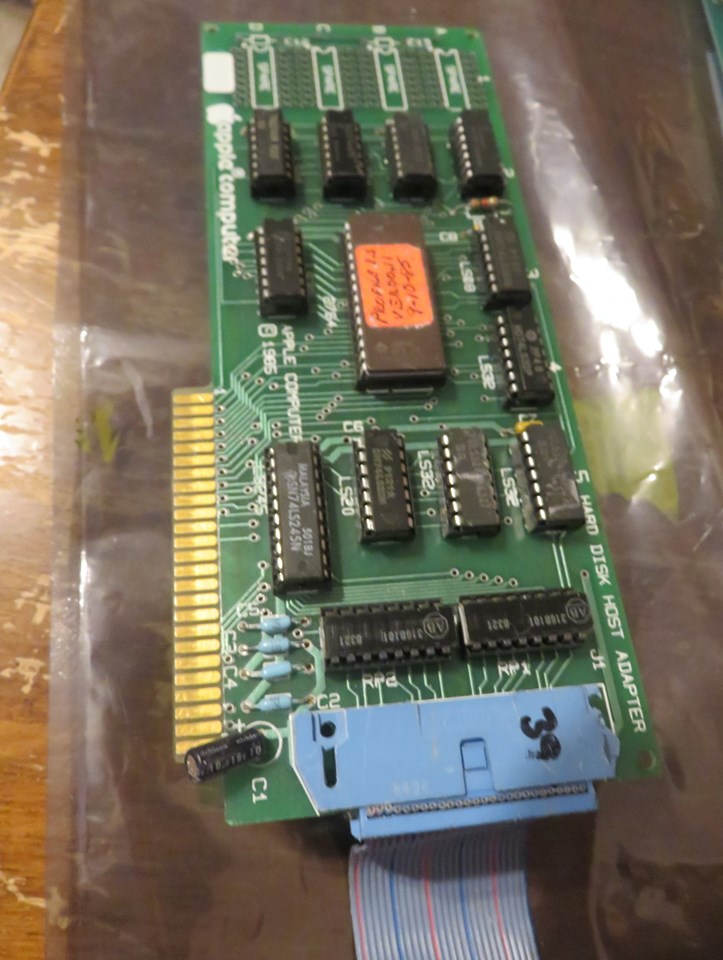 unknown card posted in facebook group. .. no xxx-xxxx number to be found.. any clues.. hard disk host adapter isn't what they usually called these either

As I recall, Apple Computer only had SASI and SCSI Hard Drives, back in the 1980s.  This would likely connect to one of those kinds of drives.

The additional Chip Area at the keyboard end is like the First Apple Computer Parallel Printer Cards.

The term "Host Adapter" usually only applies to SCSI interface cards.  Especially if the other end of the ribbon cable has a female DB-25 connector on it, I'd bet money it's a SCSI card.

Especially if the other end of the ribbon cable has a female DB-25 connector on it, I'd bet money it's a SCSI card.

This is also what I initially thought. But this card is "(c) 1985". In this year Apple added the NCR5380 to the Mac. This new Mac Plus came in January 1986, means the developer at Apple knew the progress in standardization of the new SCSI protocol which followed the SASI standard. It's possible that this Applebus card was the attempt to bring SCSI to the Apple II family before the release of the SCSI standard (in 1986) and the new chip from NCR.  With "(c) 1986" Apple released the "SCSI card" based on the new chip.

But there is a detail: the number of line drivers on this early Applebus hard disk card is very low. SCSI needs 8 bidirectional data lines and 9 control lines. RP1 and RP2 are no line drivers. Probably these are a kind of bus termination. There is just one LS245 and some LS32 but no latch as i.e.a LS373. And there is no complex chip like a PAL to handle a bus protocol like SCSI. This can be done in software but you need more line drivers.

When you look onto SASI cards you recognize some more chips which handle the similiar SASI protocol i.e. the XEBEC SASI card or a SASI card from Cameo here in my collection:

So my conclusion: neither SCSI nor SASI.

Did anybody read the stuff written on the EPROM?

The first Profile card from 1983 also with a ribbon cable with 26 pins.

Added: some explanation of the Profile interface from Patrick Schäfer.

I think Ralf is correct, it is probably a Profile card for an Apple II for the 5MB Profile hard drive.  That drive used a Seagate mechanism with a proprietary Apple controller card on it and a proprietary interface.

The same drive was far more commonly encountered on the Apple /// with an Apple /// specific card and was also used on the early Lisa computers.