I've been doing a lot of disk-related activity lately (transferring disk images via ADTPro, formatting and testing disks) which has worked fine until recently.

The first thing I noticed was that I got a strange disk-seek sound (a "wiggle" of sorts I can describe it like that), and several disks (transferred from my Mac via ADTPro) gave that behaviour and couldn't proceed loading the content. So I disconnected that drive (I have two 5.25" drives), but now I'm getting it on the other drive as well with some disks. At the moment I only have one drive connected to the drive card.

While some disks work and others don't (disk images recently transferred to the II+) and those problematic disks checking out fine when checking the disk surface (I think I used Copy ][+ for this, or some other copier) I find this behaviour erratic and strange.

Oh, I've also checked the disk images that I've had problems with on my Mac, using the Virtual ][ emulator. They work fine there.

I know capacitors go bad after a while, so the first suspect is the one and only electrolytic capacitor on my Disk ][ controller card. It's marked C2 on the PCB and it's value is 22uF/16V. It'son the left hand side of the PCB as you can see in this photo I found in the forum's media browser archive (don't mind the switch -I haven't figured out how to insert photos here from the web) : 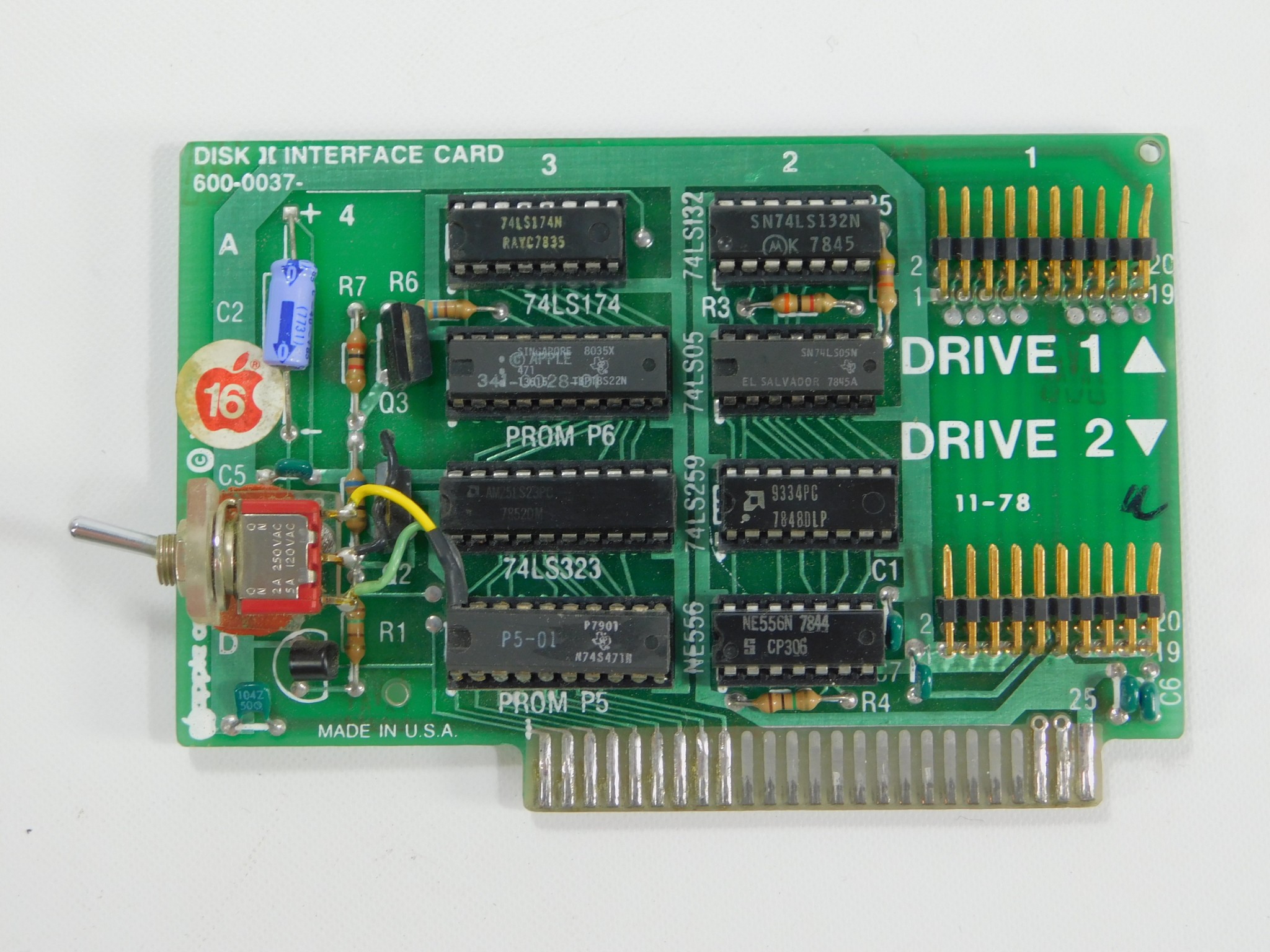 My C2 capacitor reads around 56 uF with my digital multimeter's capacitance mode which obviously doesn't sound right (I removed one pin off the PCB to get a correct reading). Could this be the reason for the strange behaviour?

Unfortunately I don't have a correct replacement here (and ordering online takes forever) so I wonder how critical this part is? I do for instance have a new 100 uF/25V capacitor -is it suitable for this use? I probably have others as well, but I'm aiming for new, unused capacitors I may have.

By the way, I replaced the two power transistors (Q2, Q3) a few days ago as they had previously had their legs bent a few times too many and (rather messy) resoldered as a quick fix, so new ones were in order. That probably rules out them as the problem source as well.

This capacitor C2 controls the time of the /ENABLE for both drives after the last access to the drive. I'm not shure but I think this signal controls the motor in the drive. This is done by the "right" part of the timer chip NE556.

Found it! A replacement capacitor 22 uF/25V (with an actual 22 uF reading) so that's good.

Another thing I noticed was that both drives were running a bit slow, according to running Apple's Disk Alignment Aid (N-D-N) (P-N 652-0199) which showed around -12 while the other drive showed around -15. I've adjusted them both now very precisely: they're both more or less at zero, drifting no more than +/- 2.

Are drives with such low speeds something that can cause problems, while not consistently (not with all disks)?

One thing I noticed now was that several of the disk images I transferred from my Mac (using ADTPro) won't boot. Formatting the 5.25" disks then transferring the same files again made it work fine. I assume wrong drive speeds cause incompatibilities.

When old electrolytic caps begin to dry out they do tend to increase in capacitance value and then eventually drop in capcitance, that is why the ESR value is considered a better way to test them.

That's probably what's happened here. So a dedicated ESR would be better suited for this?

But if my meter shows a reading which is the same (or very close) as the value printed on the capacitor, can I assume it's fine?