Fascinating (at least to me) Apple IIe video issue

Hello, all you wizards

(Sorry for the maybe hard to follow description. It is puzzling to explain -- and English is not my first language)

When I boot this PAL Apple IIe, I get a scrambled GR mode screen like this: 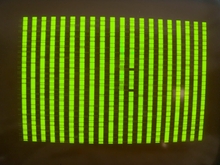 It changes all the time, but stay very similar (hard to explain, but here is another picture of the same screen). 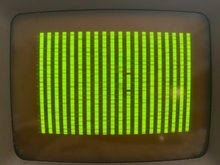 Notice the dots are not at the same place. It seems to be changing at every refresh cycle. Not all characters are changing (more on that later).

If I remove the CPU, I get the same kind of pattern, but it doesn't change. It is often less "random" (sometimes it is just the same pair of chars repeated -- probably just what is in memory at startup). 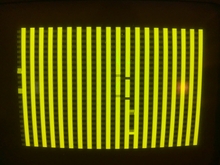 If, with the CPU inserted and I press Conrol-Reset, the display freezes (while I hold the keys). When I press Control-Reset several times in successing, I sometimes can get a TEXT mode scrambled changing screen. In some cases, I can get it to display what is obviously ROM content: 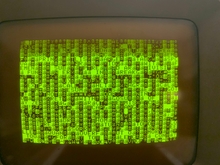 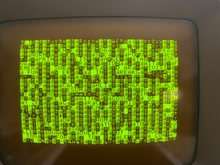 This screen is changing all the time, but

a) not all chars change

If I look in the Apple IIe charset, all non-changing characters have their bit 6 set to 1. All the others are created from a superposition of two characters that only differ by their 6th bit (like '%' and 'e') [I can check that by pressing ctrl-reset, which generally freezes the screen].I discovered that the parts that flips are characters exactly 32 bytes appart (two examples).

b) it loops over every second, in what looks the same pattern (there seems to be some wave of chars on screen for 500ms, then a more static display, and it restarts). I can try a video if people want.

My suspicion is that a broken "bit 6" RAM chip may give so of this behavior (CPU instructions are wrong and it crashes/loops, while the video reads garbage). Or some latch somewhere?

Here is the motherboard: 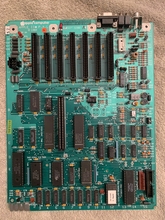 I tested the few LSxx that are socketed in my minipro, they seems to be good.

The least hassle would probably be to swap the CPU in the first instance (and they are readily available and fairly inexpensive).

Second likely suspect would be the RAM. Worth socketing if you are going to swap in any case.

Otherwise the old trick of powering up the board for a while (5 mins or so)  and feeling the top of the ICs for any unusual heat has also yielded good results for me.

Hope that helps - always interesting to see how these pan out.

If you do have access to an oscilloscope control the clock to the 6502 the the address/data lines, going on a limb here but would suspect the RAM chips

This is likely either bad RAM or bad ROM. I suppose swapping the 6502 won't hurt, but there are a lot of other issues along the pipe to it that need to be analysed.

I didn't put it in the original post, but I did test with an oscilloscope. The A and D lines of the 65C02 looked good.

I don't see why the 65C02 could produce such issue (as the content of the screen is changing much faster than the CPU can address data), so RAM look like a good guess.

Am now waiting for sockets and chips. Will update.