I picked up an Apple II clone last week, and I'm in the process of re-storing it.

Has anyone heard of the Orange Peel by the Canadian company Orange Computers inc.

All I could find was an ETI article about it (attached).

I decided to re-cap it before turning it on, it's only a $25 order from Digikey (including the original Zenith monitor).

I didn't think to take pictures before dissembling it. But here's the main boards: 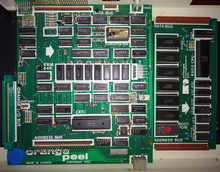 I intend to dump any ROMs as soon as my new programmer comes in, my old serial programmer is in a box

somewhere and I wanted something USB anyway.

Sins it has no basic ROM and can only boot from disk I've started designing a version of the Brain Board.

" The Brain Board is a firmware card for the II that allows you to do several tricks that are difficult to do otherwise, such as booting up a IIplus or IIe directly into cassette Integer Basic, and it also offers a way to run a mostly-compatible emulation of the Apple I. (IE, the "Woznium Pack".)"

I got Mike's approval to sell a few too, once I've tested the board (and anyone is interested) I'll make a run of them.

Just some information I found...

Yep, that's the system I have, though my disk drive is branded Orange Computers and it's a half hight drive.

Main power supply re-capped, and I have backed up the boot and character ROMs.

What I thought was an EPROM on the keyboard is actually an MC68705P3 microcontroller.

It's an obscure enough computer that I think it's worth backing up all the code and documenting it.