Strage issue with //c and at least one game

Recently I've been using my childhood //c to back up my floppies to my Floppy Emu before they go bad (or worse than some of them already have).  While doing so, I've also checked a few of my original game disks to see if they still work.  One of them is Legacy of the Ancients.  I've noticed my //c more often than not is having trouble with the main menu.  Normally there are 4 options displayed.  but it instead is drawing all 4 options on top of each other in one line.  if i use the joystick to move up and down, the program acknowledges it, and moves the highlighted bar to the next item, and redraws the menu, again all on top of itself.  Pressing a button to go to the next menu results in the same thing.

I don't ever recall this issue happening when I was a kid, so it's making me wonder if something in my //c is starting to go.  I've recapped the power converter and main board (the power brick is still original).  And while I haven't spent a lot of time playing other games/using other programs on it, so far I haven't seen any other games/programs exhibiting any strange behavior.  It happens both with my original floppies, the WOZ images, and the cracked images of the game.  So it seems to be my //c, not the floppy itself.  Originally, it seemed to only happen after the //c had been warmed up.  But even now, I'm running it with the top of the case off (as I haven't gotten around to re-casing it after the recap), so it should be running even cooler than normal with no air flow blockage.  But yesterday I tested again from a cold boot (machine had not been on for at least 2 days), and it it it right away.  I've run various diagnostics on the //c, and nothing ever seems to come back as being bad.

I know this is a long shit, since it only seems to be happening with one game.  But curious if anyone has ever seen this behavior before, and what may be the issue.  Or have any suggestions for any other games/programs/diagnostics to test with it. 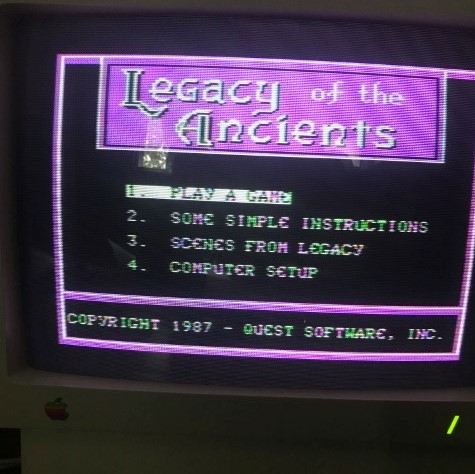 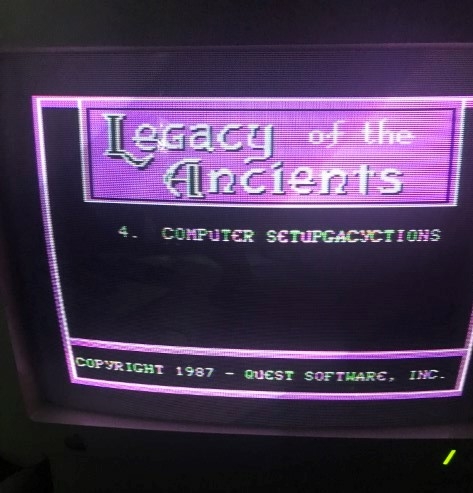 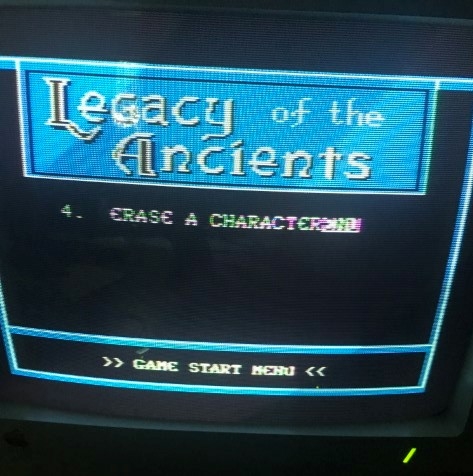 Hi, very odd that it's just the one game.  I wonder what the program is doing different. Do you have another system to test the game on? Did you re-seat the socketed chips?  Does your IIc have the built in diags and did it pass? That's all I can think of at the moment.  Hope you figure it out.

I had kind of put this off to the side while I worked on some other stuff, but your reply is as good of a reminder to pick it back up again.

While looking at it today, I noticed a pattern.  It seems like probably 95% of the time when the computer is cold booted/power cycled by the switch. the issue occurs.  If it's warm booted/OA-CTL-RES, it almost always displays normally.  In fact, it may display normally every time with a warm reboot.  Using the power switch almost guarantees the issue.  but not always.  Once today the machine had been sitting off for a while, it happened on the first power up.  After sitting a couple hours later, it booted with he proper menu after turning on.  But in geernal, most of the time a switch recycle causes it.  I don't think I ever saw it happen with a warm boot.

Anyway, to your other questions.  I do have a IIgs.  I have booted the program on it several times (both cold and warm), and have yet to see the issue.  I have not reset any IC's on my //c.  I think there are 4 of them that are socketed.  I usually don't like to mess with IC's unless they are suspect, just to avoid any accidental issues.  My //c is an original ROM 255 (with the original IC timer instead of oscillator), so there are no built in diags.  I have tried several disk based diagnostics.  I don't think any of them have found anything, but I'm not sure how to interpret some of them.  below are the programs I've tried.  If there are other/better ones.  I'm open to trying them.

I ran the confidence test, which appears to have a ram checker as part of it.  After running the various tests, it flashes "NORMAL END" and then seems to start all over again.

ROM test appears to pass, it says Rom Sec Verifies for D0, D8, E0, E8, F0, and F8.  The 80col test passes, as did the port test.  The memory tests, I'm not sure how to interpret.  I ran the motherboard memory auto test.  It beeps every now and then, and displays presumably the address range it's checking in the corner.  Then the screen goes kind of crazy for a while, and then it goes back to beeping and displaying addresses.  Till it gets to F000.F800.  It beeps, and then just puts a cursor kind of in the middle of the screen.  No indication if it passed or failed.  The auxiliary auto test does the same.  So I have no idea if it's passing or failing.

The RAM test comes back and says Ok for both main and aux.  It seems like its a really fast test though, so I'm not sure how thorough it is.

I have no idea how this works.  It boots up, runs some patterns on the screen, then asks me to select a language.  Tells me the tests require input form the user, and to press space bar if the results match the procedure, or esc if they don't.  Then it flashes what appears to be a basic schematic, then changes to what looks like a picture of a //c with maybe a loop back cable connecting the printer and modem ports with a flashing ? mark above it.  If I press space bar, the schematic logo comes up, then puts an X through it and says 570.  The program then seems to lock up. Can't seem to get any further.  If anyone has any idea how you you are supposed to use this program, or know where to find the procedures it mentions, I'd love to know.