yesterday, I finally received a batch of 15 wave soldered boards back from the supplier. Attached are some pictures (after I populated the sockets). 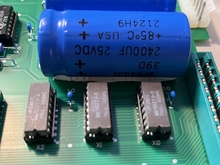 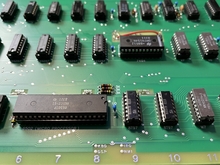 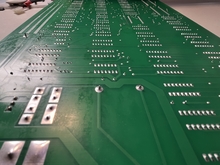 The most important part: The board I populated worked out of the box on first boot, which is very promising. Next Monday (when I finally receive the missing DS0025CN) I will populated the other boards, then testing starts. Once that has been completed, the main production will start with some changes to the board regarding the color which we will push more to a darker green with a hint of blue.

... resurrecting the Apple-1 from the dead. So, industrially wave soldered Apple-1 will be available in the future, right ?

We are witnessing a singularity in the history of microcomputers: never before did it happen that a 40+ year old microcomputer has been put back into industrial production. My own plan to accomplish the same goal fell apart just at the beginning of the pandemic. I'm glad that you have picked up the pieces I left behind and realized my dream.

I wish you all the best with this endeavor. There are many people out there in the world who are desperate for an Apple-1 to complete their collection but they can't solder one together by themselves. And finding somebody who can hand assemble a good custom build is a hit-and-miss, like with car mechanics. There are a handful of people in the world who have sold quality Apple-1 builds: I only know four, one of them being me, and my RQLT turned out to be too priceless (I refuse to work for GTP aka Green Toilet Paper aka Imperial Scrip --- the privilege of age, so don't even ask me to build you one, I'm too busy to spend my GTP before inflation makes it totally worthless). Of course, builders using my 100% tested and burned-in IC kits can also make high quality builds, if they can do a quality soldering job, but they usually don't sell their builds after they have found out how tedious and time consuming it is.

So these new industrially wave soldered Apple-1 are a nice opportunity for everybody who wants one but can't build one.

Comments invited ! (I wonder why nobody other than me has commented so far)

Thanks, Bernie, for your warm words.

It had been quite a journey. Like, half a year ago, I could not even properly solder …

This first production was a test to get ready for the "big one". I have decided to produce 200 wave-soldered boards. Some of them will be populated with the ICs, too, others won't. So people have two options: Get a fully populated and tested board OR get the board with all parts and sockets but NOT the ICs. And then they can go hunting for those themselves.

The good thing is: To wave solder the boards, I do not have to have the ICs. But getting some of the other parts, is still tricky (especially the board connector – I have to find a better source there. All the usual suspects are sold out all the time).

What is your target price for a wave soldered board w/o the ICs?  If you aren't comfortable posting it publicly you can send me a private message.

"So people have two options: Get a fully populated and tested board OR get the board with all parts and sockets but NOT the ICs. And then they can go hunting for those themselves."

I could source stripped down but still 100% tested and burned-in IC kits for the 2nd option. The problem I see is with getting the 74123 timing right.

If you already have put the timing elements for the 74123 dual oneshot IC (2 resistors and 2 capacitors) into the wave soldered board the chances to hit the right timing with random 74123 are slim. This is why I provide hand selected timing components in my kits. These are selected from a huge stock of pre-sorted and pre-conditioned components using a special test rig and go together with "their" 74123 into one little plastic bag. These go together into one kit.

Some "secret sauce" has been spilled by writing this. Unless a solution can be found that works I don't think the 2nd option is viable for people not having a well equipped electronics lab including an oscilloscope and a soldering iron (to put the right timing components in). These people however would probably be more inclined to build their own Apple-1 clone by hand. There is some pride of ownership with "I have built that with my own hands".

This problem with the 74123 oneshot also disqualifies the Apple-1 for industrial mass production. I always wonder how many hours Woz and Jobs had to fumble and mess around and rework them to get the timing right. Had Woz tried to get through an industrial design review with this quirk - use of fixed resistors and capacitors on a 74123 for critical timing - they would have thrown him out. Not out of the company, perhaps, but out of the design review and "go back to the drawing board". It's a no-no. Not allowed. Not viable in any mass production environment. You can use a trim pot but this also opens a whole can of worms and adds another station on the assembly line needing an oscilloscope and manual trim.

But Woz was not dumb. He learned that lesson well. In his Apple II design, all the critical timing is digitally derived from the master crystal oscillator, like it should be. The Apple II was a much more mature machine because it was his 2nd attempt in designing a "personal computer". Whereas for the direct competitors at the time, Commodore with the PET 2001 and Tandy / Radio Shack TRS-80 it was their first attempt, and it shows. They did not make all the mistakes Woz had made in the Apple-1 but still made plenty enough of similar mistakes to end up with much inferior machines compared to the Apple II.

I also remember that in the 1970s the highway towards the "personal computer" was littered with wreckages to the left and to the right. A graveyard of companies who tried to get a piece of the pie, made dubious kits with little chances for the builder to ever make them work, or sold wave-soldered PCBs which lacked testing and were full of faults and flaws. They all went out of business. The first 4 years of BYTE magazine are real eye openers when you look at their ads and then make a list of companies and how they came and later disappeared / went out of business. Almost none of them survived. As with any new technology there was a learning curve on top of previous professional experiences in mass production of electronic products. Most of the contenders lacked that experience - many were hobbyist / garage company types - and they ran out of money before the learning curve was finished. Hence, the wreckages on that "highway". The two Steves barely made it until they had that marvelous Apple II.

This is why IMHO the "ugly duckling" or "orphaned" Apple-1 should be on a pedestal right in the main entrance hall of Apple HQ. Without the lessons learned from its failure the Apple II would not have had that leading edge. The Apple II was so good and well thought out that IBM stole most of the key concepts for their first PC. Just look at the concept of one motherboard - with the slots for daughter cards - all powered by a switchmode power supply. Neither the PET 2001 nor the TRS-80 had these innovative key features the Apple II pioneered and the IBM PC copied. I wonder if the potential issue of "lack of inventive height" prevented Apple to patent this very recipe. Maybe they had bad patent lawyers at the time. Who knows.

The point I want to make is that without the Apple-1 they would never have gotten there. All the lessons learned from it made the Apple II that awesome.

Addendum: for those interested in the early Apple patent situation

I've thoroughly researched all the early Apple patents and filings and I don't think they got their money's worth (I mean the money spent on lawyers and the the patent office). What they got granted in the issued patents only protects subtle details in the Apple II and Disk II design (and not to forget the switchmode power supply circuit) and any electronics designer worth his salary could dodge all the claims granted after maybe a few hours of thinking - and still rip off the inventive ideas of Woz and Rod Holt.

Woz' key patents for the Apple II and Disk II are:

and a profound discussion is here:

In the overall picture, the patent situation for Apple (for the Apple II and Disk II) appears to have been too thin to fend off the copycats who stole Woz' ideas. What still eludes me is how these copycats  - i.e. those responsible for the flood of Taiwanese Apple II clones - could get away with copying the patented circuits verbatim. I always had expected that at least some small mods were made to dodge the very narrow claims of the granted patents. But my recent analysis of several examples of rip-off copies reveiled that they did not make any such mods. They violate the patents. How they could do that without being stopped dead in their tracks is a big mystery to me.

A lot of Taiwan/Hong Kong made motherboards did get stopped by customs, especially towards the //e era.  But it was mostly ones that violated Apple's ROM Copyrights rather than for violation of the patents.  Now, they did sue Franklin in particular for the ACE 100 violating the Woz video patent, for which early ACE 1000s were monochrome only and middle ones had a "color board" added which worked around the patent.  Later motherboards integrated color back to the main board but using non-infringing circuitry.  Apple did finally succeed in killing Franklin's clones because of ROM Copyrights.  They were less successful against VTech's Laser machines because they hired Central Point (the Copy II Plus people) to reverse engineer and clean-room implement a compatible monitor ROM...  and even more smartly, actually licensed Microsoft's 6502 BASIC.  The Laser 128 (and EX and EX/2) were ultimately one of the most successful families of clones in terms of unit sales with even some big retailers like Sears selling them.  Most of the no-name clones, especially those of the ][+ era were imported in parts and assembled and sold by smaller clone shops or regional chains.  A few like Pineapple (later Pinecomm due to Apple's Trademark infringement claims) had some dealers but mostly sold by mail.  In other countries it was different because they didn't have to deal with US Customs.  From what I've seen on eBay, it appears that more of the smaller clone brands were sold in places like Canada and Australia than in the US probably because of that.