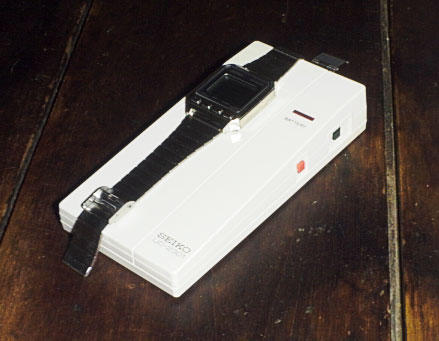 The Seiko Datagraph UC-2001 was marketed in 1985 as a PDA-on-the wrist. At $500, it doesn't appear sales were brisk, but the coolness factor remains. The Datagraph has 2K of memory, usable for storage of text. It communicats with the UC-2301 interface via a wireless connection. The UC-2301, in turn, communicates with the Apple II via the game port (internal).

The Apple II software that controls it, Time Trax II can also serve as a stand-alone scheduling program. The user enters all his appointments, etc. into Time Trax, then synchronizes with the watch. Starting with the current day (unless you specify otherwise) the watch will transfer all appointments from that day forward until the watch's memory is full.

The appointments are stored on the watch as plain scrollable text. Likewise, plain text can be stored on the watch in the "memo pad". In the Time Trax software, simply choose a Memo Pad, enter the text you want to store, then transmit it to the watch. The UC-2001 can store two memos of 1K each, a schedule of 2K, or one memo and one schedule of variable sizes.

Years after 1999 are not supported by Time Trax, though I'm looking for a work-around. Right now just use the year 1974 instead of 2002 - the days match. The watch itself doesn't take the year into account at all, so the issue is only with the Time Trax software.

I have successfully used Time Trax II and the Datagraph with both the IIe and IIgs. The IIgs must be set to "Normal" speed in the Control Panel. The II+ will likely be compatible, though I have not yet tried it. The Time Trax software is ProDOS based, not copy protected and has no difficulty with hard drives.

The interface was made by Creative Peripherals Unlimited. I believe CPU sold the same box, without the watch interface, to Applied Engineering as the IIc System Clock. If this is so, getting the watch to work with the IIc is likely just a matter of rewiring the cable. A IIc version of the UC-2301 was avaiable and the Time Trax software allows the user to choose whether the game or serial port is used.

The watch's interface looks like it has to be pretty simplistic and I'm lookin for ways to get it working with other systems. If you buy one and figure out anything interesting, let me know.

Screenshots of the Time Trax II software are available here.

Looking at the pinouts:

I have taken high resolution scans of the UC-2301 circuit board:

Here's a closeup of the watches. The one on showing the time is used. The one with the blank screen is brand new, just out of the plastic slip. The display's contrast is adjustable.