The sexiest MacQuarium out there! Definitely more useful than the old non-working CRT it used to be! Pretty tricky fnding the right glue and making sure she won't leak or kill the poor little fishies! I'm taking orders! mri_syd@mri.com.au 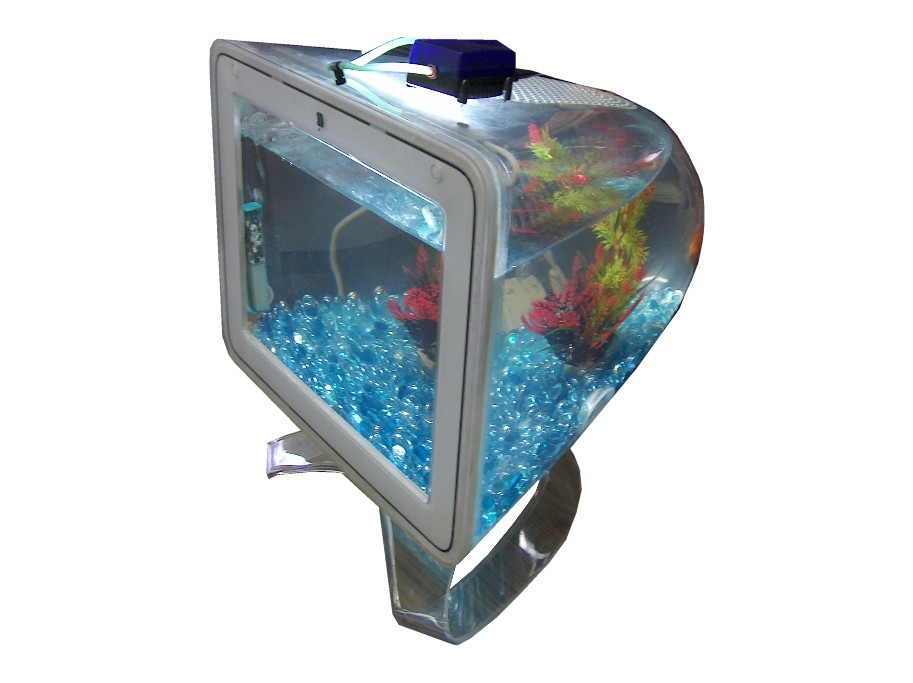 Did you notice the Apple logo

Did you notice the Apple logo is inverted?

The upside down apple logo

Hi Jon, the logo's upside down because this is a fully "recycled" Apple - na, besides I was a bit worried I'd get a leak thru the old power button - next one will be right way up - much more confident in the glue than I was when I first started. Cheers Gaz

That's a very reasonable cause to put it in flipped. Now that you post your reason, I'm wondering why it didn't occur to me when I was wonding why it was like that.

I'm wondering after all this time how the tank has fared if it's still up and running. Can you give us an update?
I am specifically wondering if the tank got cloudy. Is there a way to access the interior of the tank to clean (w/o ungluing) as it may get cloudy?

In all the years I've been hanging out here, I don't remember ever seeing anyone called mri-sydney around, and if you look at his tracking record, his input on this image post is the only thing on it, so if you want a direct answer, the email address he provided above would probably be the best way to go.

Having said that, I found one of these monitors a couple of years ago, and the first thing I thought was, this would make a great fish tank. It seems designed for a MacQuarium. Problem was--haha--it still works, otherwise, I would have ripped the guts out right away, and probably have it still sitting around as a to-do project among the countless others. Right now, I'm thinking of pairing it with a Gigabit G4 and trying to sell them as a nostalgic pair. The monitor is buried in storage, and I don't want to dig it out right now, but as I recall, the exhaust grill on the top of the monitor could easily be made into a removable door for easy, wide access into the tank. All fish tanks get cloudy if not properly maintained, so I don't know why you'd expect this one to be any more so. I think the thing to really keep in mind--and what potentially could be a problem, as in all plastic aquariums--is to not use an abrasive cloth or scrubber to clean the thing which would give you a permanent cloudy look. Even with glass ones, that's something to keep in mind.

One idea I had that's not present on this one is to make the USB slots on the side into the input for the air hoses. Another idea I had been fantasizing about recently is to put an LCD screen on the front to make it a fully functioning MacQuarium. Wouldn't that be cool? It could reincarnated as a computer monitor again--place it on your office desk facing the door so when people come in the door they wonder why you're staring so intensely at the aquarium. Or it could be a digital picture frame--with aquarium. I was thinking you could put an LCD which was smaller, maybe a 15" or smaller, and thereby, make it so you could still see inside the aquarium from the front around the top and sides of the LCD, so you could have those pretty fishies floating around your Applefritter pages. Of course, to make it aesthetically correct, the LCD would need to be set back into the aquarium so you'd still use the monitor's flat front. Wow, what a lot of work that would be, making a totally sealed enclosure for the LCD, but do-able, I think...but not by me. I've just scrapped my idea of putting a little ASUS motherboard I've got into a Mac Classic II case I've got, along with an LCD and a hard drive with Windows XP installed, changing the name on front to Macintosh XP, and calling it Demon Child. Oh well, the dear daughter's in private school now--Obama's old alma mater--and I'm busy cutting out all distractions because I have to get very practical to keep her there, shucks.

In case I sparked anyone's imagination, I put the ASUS motherboard up on eBay: So Long Fun Idea!

Well, good luck on your MacQuarium project, and please, post pictures! Maybe create a thread and post pictures of the whole process, including the gutting of the fallen beast.

Noooooooo! Don't invert the Apple logo, or the anti-Jobs will appear!

Your Macquarium is a wonderment! I adore it! :mac: