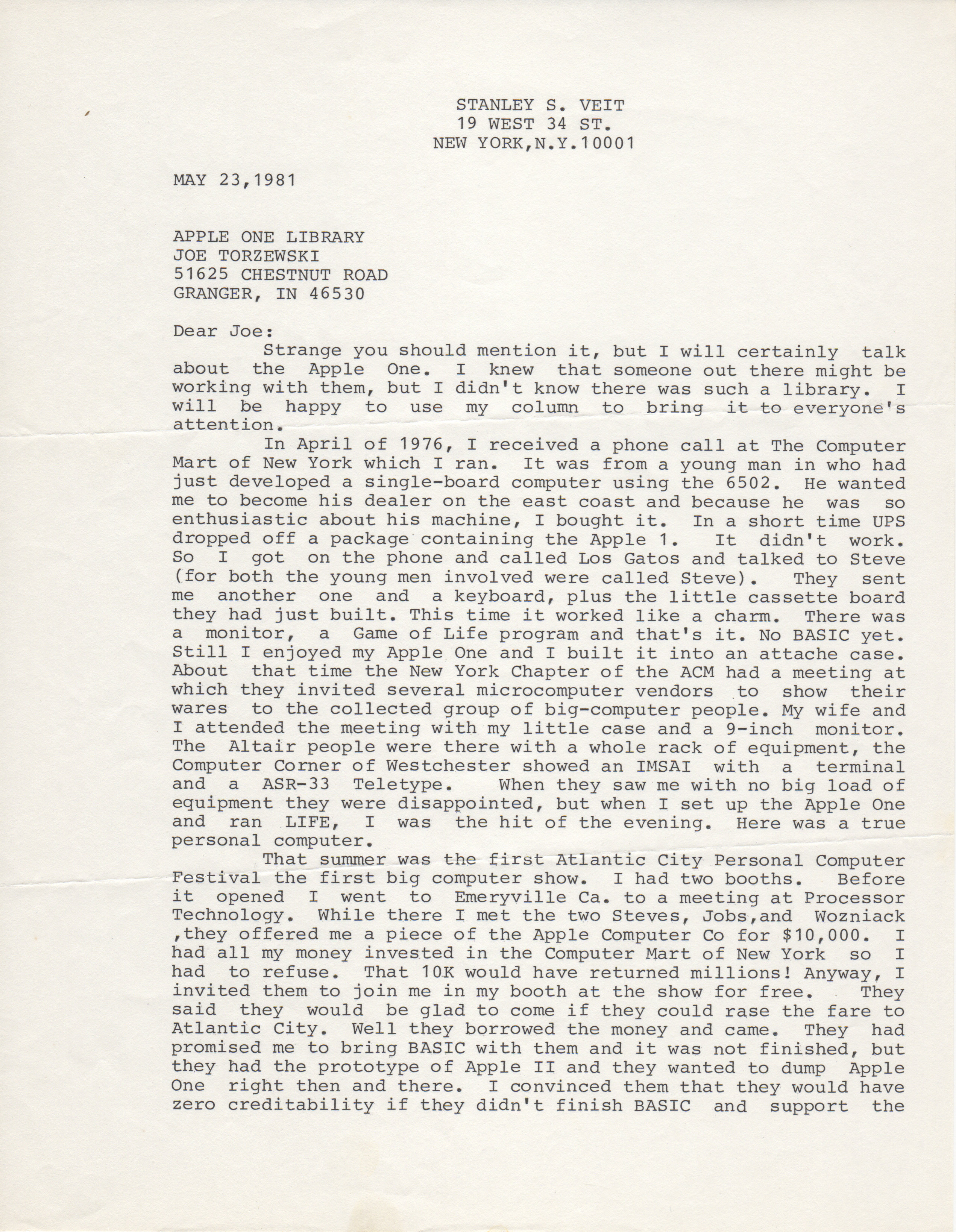 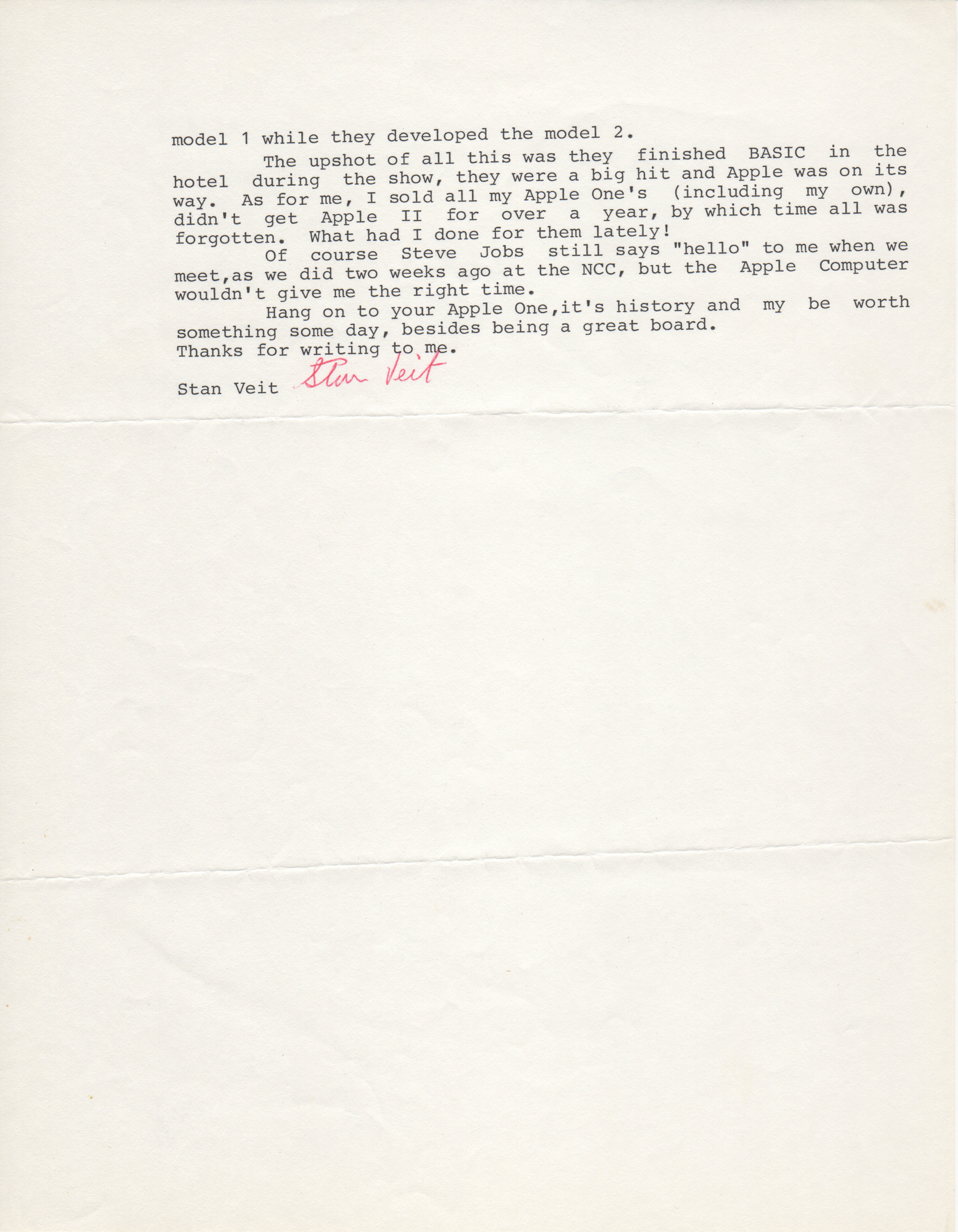 This letter is from Stan Veit, former owner of The Computer Mart of New York, the third person Steve Jobs sold an Apple 1 to, and Apple's third dealer. It was sent to Joe Torzewski of the Apple One Owners Club.

Strange you should mention it, but I will certainly talk about the Apple One. I knew that someone out there might be working with them, but I didn't know there was such a library. I will be happy to use my column to bring it to everyone's attention.

In April of 1976, I received a phone call at The Computer Mart of New York which I ran. It was from a young man in who had just developed a single-board computer using the 6502. He wanted me to become his dealer on the east coast and because he was so enthusiastic about his machine, I bought it. In a short time UPS dropped off a package containing the Apple 1. It didn't work. So I got on the phone and called Los Gatos and talked to Steve (for both the young men involved were called Steve). They sent me another one and a keyboard, plus the little cassette board they had just built. This time it worked like a charm. There was a monitor, a Game of Life program and that's it. No BASIC yet. Still I enjoyed my Apple One and I built it into an attache case. About that time the New York Chapter of the ACM had a meeting at which they invited several microcomputer vendors to show their wares to the collected group of big-computer people. My wife and I attended the meeting with my little case and a 9-inch monitor. The Altair people were there with a whole rack of equipment, the Computer Corner of Westchester showed an IMSAI with a terminal and a ASR-33 Teletype. When they saw me with no big load of equipment they were disappointed, but when I set up the Apple One and ran LIFE, I was the hit of the evening. Here was a true personal computer.

That summer was the first Atlantic City Personal Computer Festival the first big computer show. I had two booths. Before it opened I went to Emeryville Ca. to a meeting at Processor Technology. While there I met the two Steves, Jobs,and Wozniack ,they offered me a piece of the Apple Computer Co for $10,000. I had all my money invested in the Computer Mart of New York so I had to refuse. That 10K would have returned millions! Anyway, I invited them to join me in my booth at the show for free. They said they would be glad to come if they could rase the fare to Atlantic City. Well they borrowed the money and came. They had promised me to bring BASIC with them and it was not finished, but they had the prototype of Apple II and they wanted to dump Apple One right then and there. I convinced them that they would have zero creditability if they didn't finish BASIC and support the

model 1 while they developed the model 2.

The upshot of all this was they finished BASIC in the hotel during the show, they were a big hit and Apple was on its way. As for me, I sold all my Apple One's (including my own), didn't get Apple II for over a year, by which time all was forgotten. What had I done for them lately!

Of course Steve Jobs still says "hello" to me when we meet, as we did two weeks ago at the NCC, but the Apple Computer wouldn't give me the right time.

Hang on to your Apple One, it's history and my be worth something some day, besides being a great board. Thanks for writing to me.