I have not been active in the Apple computer world for sometime but last month I was surfing through eBay looking to see what Apple prices were doing when I saw a listing for an Apple 1 rep board.  I remembered that Mike M had been working on an Apple 1 project back when I was building his Apple II Rev 0 board.  As I found Mike’s products and support were excellent, I thought why not build a Mimeo and ended up at Cory’s site where I purchased a motherboard board, ACI board and Proms.  The components came from Unicorn Electronics and the Apple II keyboard adapter from Vintage Micros.  At the beginning of February, I started the build following Mike’s build guide.

Test 1 was the video section where my display was not as pictured.  After checking for the obvious solder bridges, I searched on Applefritter.  My problem was similar to Sherlock’s and fortunately he documented the steps he took to solve his video problem.  The light came on for me as I now had a better understanding of the logic on the board.  My problem was a dud 2504 as well as a flaky one (thanks to the scope).  Short wait for the new parts allowed me to build the ACI board.  When the new 2504s arrived, I now had the correct display.  Off to the next test.

Test 2, the main board.  Testing started with Woz’s Test Program for the keyboard, display, power supply.  It worked.  Then I typed the “Hello World” program.  It also worked.  I then populated with the additional 4K of memory and added the jumpers for the ACI board.  Now for the cassette interface.

Test 3. I had bought a Panasonic RQ-2102 years ago but only had a used tape.  I tried the local Dollar Store and was met with a deer in the headlights look when I asked for an audio cassette.  The used tape would have to do.  I connected the recorder to my Windows PC’s speaker jack, played Mike’s Memory Test .aif program and recorded the program (sound) to the tape.  After a few operator errors on how to load the program (Mike’s instructions are clear, I just wasn’t reading what he wrote), the program loaded.  I ran the memory program for 2 hours on each bank of memory with no faults.  Next up was writing to the cassette.

Test 4.  I typed in the “Hello World” program and saved it to the cassette.  I rebooted the Apple 1 (to make sure the program wasn’t still in memory) and read from the cassette and there was my program.  I’m still grinning.

This has been a very rewarding experience from the building to the trouble shooting to the actual use of the computer.  But without Mike, Cory, Sherlock and others on Applefritter I don’t think I would be where I’m at today.  I can’t imagine what it must have been like for the original Apple 1 owners when they saw the cursor on the screen.  How many of them realized where computers would be in 45 years?

Thanks to everyone who are still keeping Woz’s dream alive.

Thank you for sharing. You should post some pictures!

Yes, thank you for sharing your experience. Great story.

Super happy you enjoy the Mimeo...  Now the fun has only just begun. 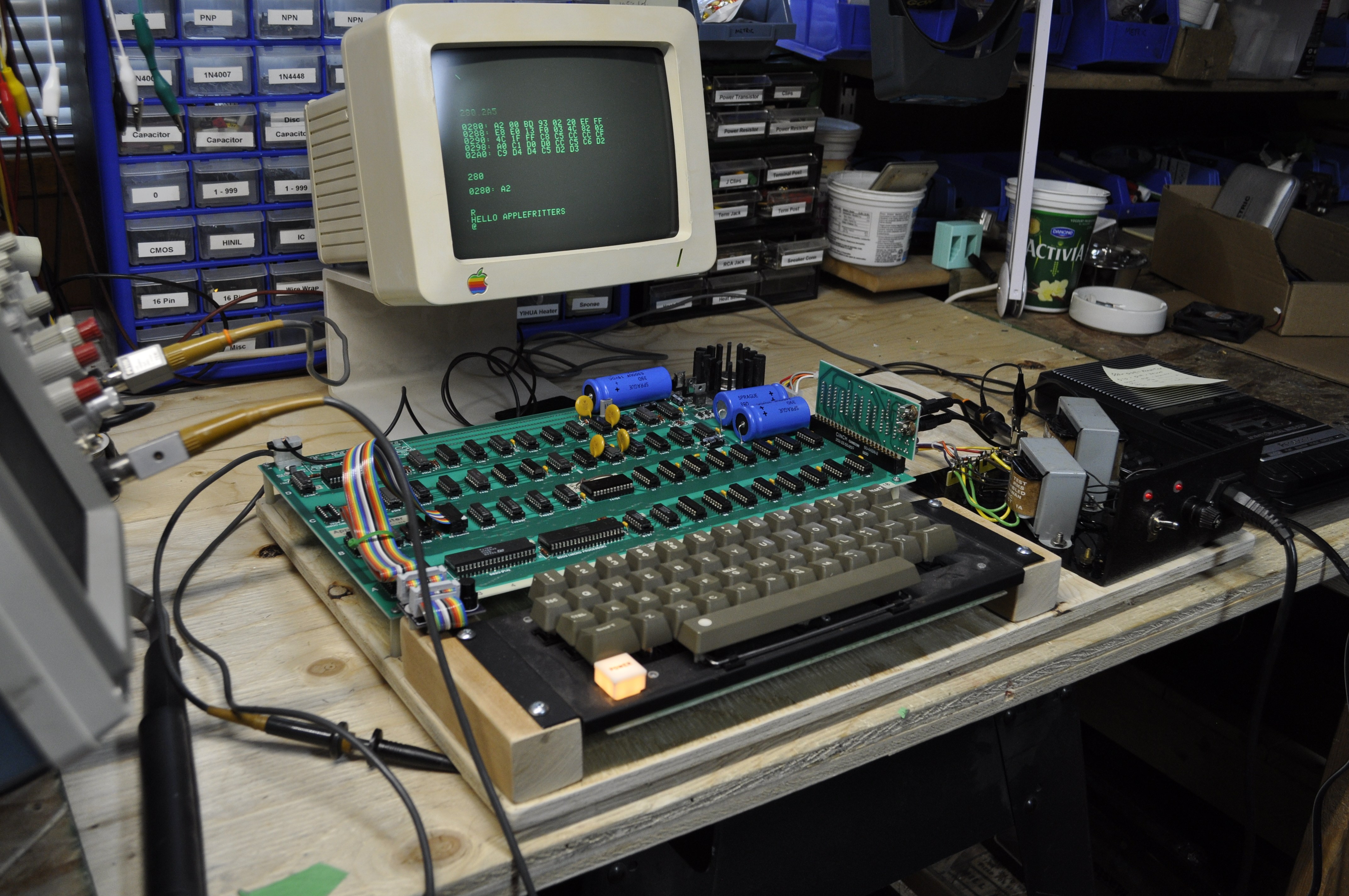 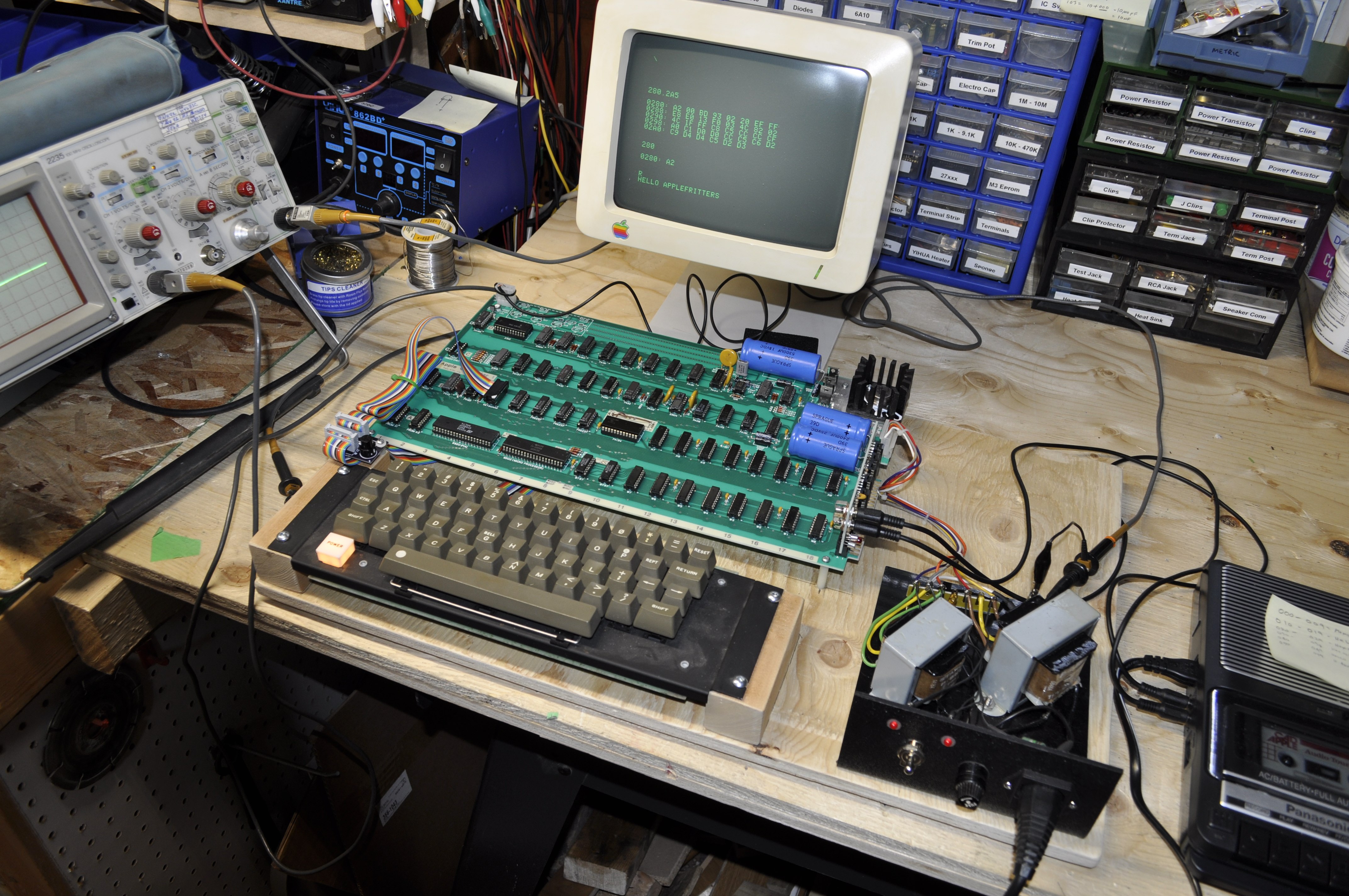 It looks good with that IIc monitor!