I think this is the source of my problem:

I want my Mac SE/30 to "Appletalk" to my MacMini2,1 to "puddle jimp" to my MacMini running High Sierra and stop having to use SneakerNet.

I am finally successful at getting System 7.5.3 with Open Transport 1.3 and AppleShare 3.7.4 on my Mac SE/30, and my research tells me that it is compatible with AppleTalk up through OS X Tiger 10.4.

For some reason, years ago I obtained a full package of Tiger Server and not just the plain-vanilla, Tiger and that is what I have installed for my legacy needs.

I acquired a Farallon iPrint AppleTalk to Ethernet hardware bridge (which will not pass TCP/IP only AFP) and even the proper crossover Ethernet cable on one end and a properly terminated PhoneNet connector on the other.

As you can see in the photograph below, I can now see "MacMini2-1" in AppleShare in the Chooser of the Mac SE/30 but when I attempt to connect as a registered user with password or even Guest, which I authorized, it continuously fails.

I think it must be my inexperience with setting up a "OS X Server" version for file sharing and there must be some box that I am not properly checking, etc., that should make this sork.

All advice is appreciated. 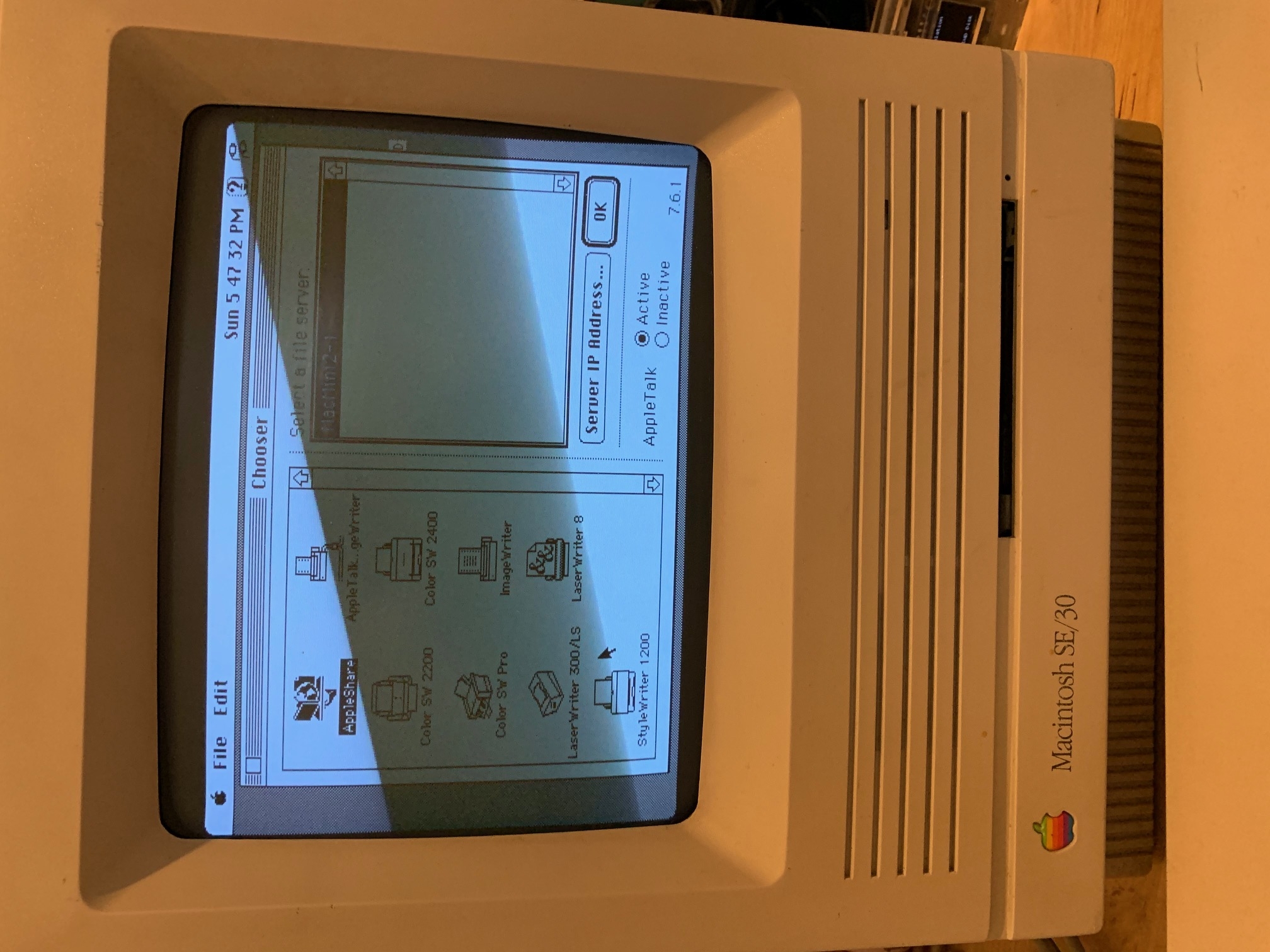 I would immediately suspect encryption/auth protocols being the issue here. I'm frankly shocked that you managed to get this far ere falling into some sort of fault. My applause to you, mate, for managing to get such a new system to appear on an SE/30 System 7 AppleTalk share.

Did you use the server admin tools to set this up? If not, OSX Server does expect that. The normal system setup / configs are bypassed by those. I advise downloading the OSX Server 10.4 User Manual. I used to manage Tiger and Leopard XServe Servers, but it has been a while since I have had to remember all of this jumbled mess.

Coming from you, Timelord, I accept that as high praise! :)

It took much research to get the correct recipe for System 7.5.3 to "Appletalk" to OS X Tiger, and the best place to start is Classic Mac Networking

As with much of computing, I had many hurdles to jump through and do workarounds, just to finally create a 224MB HD20 "hard drive" on my BMOW Floppy EMU connected to my Mac SE/30, and now of course I have made a backup, in case future adventures (and installs) screws it up!

Now here is the funny part: I have no idea why I have OS X Tiger "Server!" I certainly did not pay $499 for it and in all my years networking Macs to Macs and to PCs starting with System 5 back in 1987 and even TOPS for Mac/PC networking (all of this stuff is still in boxes in storage for me to get access to when I make room in my flat to start going through it all!), I actually have no experience using Server for the small networks that I would create as the need arose.

Even all my years advocating the purchase of OS X Snow Leopard Server, when Apple dropped the price to $19, it was not to use the Server functions, but to easily install it into Parallels for access to Rosetta to use PPC (pre-Intel) software.

So in some year, I took my MacMini2,1 and partititoned it into two drives: one for Snow Leopard and one for Tiger, and it seems I installed OS X Tiger Server.  I rarely used the Tiger partition, I just created it to help advise those whose software needs rolled back to that era.  I was even able to get VMWare 2 in Snow Leopard to run OS X 10.4 Tiger in emulation.

Somewhere I have the two install discs: OS X Tiger Server and Tiger, but buried somewhere in my storage bin.

For this experiment, I have been booting into Tiger Server on my MacMini2,1 and am somewhat flumixed at the complexity of using the Server Admin tools to start up file sharing, when I am so used to just clicking the Start Box in the Sharing Setup pane of System Preferences! haha :). It is clearly just NOT that intuitive.

But I seemed to have turned on APF and checked the box for "AppleTalk" in the Network/Ethernet pane.

But your tip is a good one: I will try to find the OS X Server 10.4 User Manual online and do some reading.

All of this would be SO much easier if I could just find my Powerbook 1400c, with its Ethernet PCMCIA card and use Apple's AppleTalk Bridge software instead of the Farallon iPrint to act as the "puddle jumping" Mac.

Thank you for jumping in!

PS: I downloaded the iso of regular OS X Tiger with the thought of burning it to a DVD and then installing it into an external drive I have connected to my MacMini2,1 so I could boot into regular Tiger and see if that makes any difference.

But as usual, another hurdle: it is too large to burn to a DVD-R and now I have to try to find my double sided DVD-Rs.  At least they are somewhere in my extra bedroom in my flat that is FULL of boxes of "stuff!" haha :)

FWIW: I can log on through AFP to the OS X Tiger Server on the MacMini2,1 from my OS X HIgh Sierra MacMini5,1 as both Guest and as TigerServer, so AFP is working fully in that direction.

I am currently stumped at trying to install OS X Tiger (non-server) on my MacMini2,1, just to see if that makes any difference.  My 3 copies of OS X Tiger just won't work on this machine and the original install discs were Leopard, even though at some point I was able to install OS X TIger Server.