Dead Apple iie restoration, looking for help along the way.

Dead Apple iie restoration, looking for help along the way

Early  Apple iie not working uk pal version two disk drives and monitor, thought this would be a good restoration project to kill some spare time and learn some new skills on the way.

Stripped down removed motherboard checked for obvious faults,  ensured all chips where well socketed general clean down of motherboard.

Removed power supply opened for general inspection of capacitors all look good to me, no obvious swelling of bulging on tops. Ordered replacement wima capacitor. Plugged power supply to check voltage + 11.30  - 12.56 and + 4.84 / -5.25 thought these were a bit on the low side but still working , plugged power supply back into motherboard and power led glowed for a second with residual power thought that was a good sign, Time to try first power up and see how far i get,

Not far at all, no beep from the speaker, nothing on the screen and no power led on the motherboard, good start, checked cables and tried a few more times, same result, noticed that I get dim flicker from the power supply when I turn off. Short on board or psu stalling under load was my guess. Should have said at start this is all new to me first stab at vintage computer restoration. Checked the motherboard again with nothing obvious, stripped power supply  again this time taking the board out of case to have a closer look at the bottom of capacitors again, nothing obvious. Have posted a couple of images of psu. If anyone can see anything of interest, it would be much appreciated or an article on how to troubleshoot psu as I don't really have a clue where to start apart from replacing all the capacitors and hoping for the best. Checking a few points on the motherboard no sign of voltage will need to look up exact points to start tracing power , again any advice would be much appreciated. Hope to keep this thread going for my own reference and help the next person making the same mistakes as me, so far all good fun and plenty of head scratching. 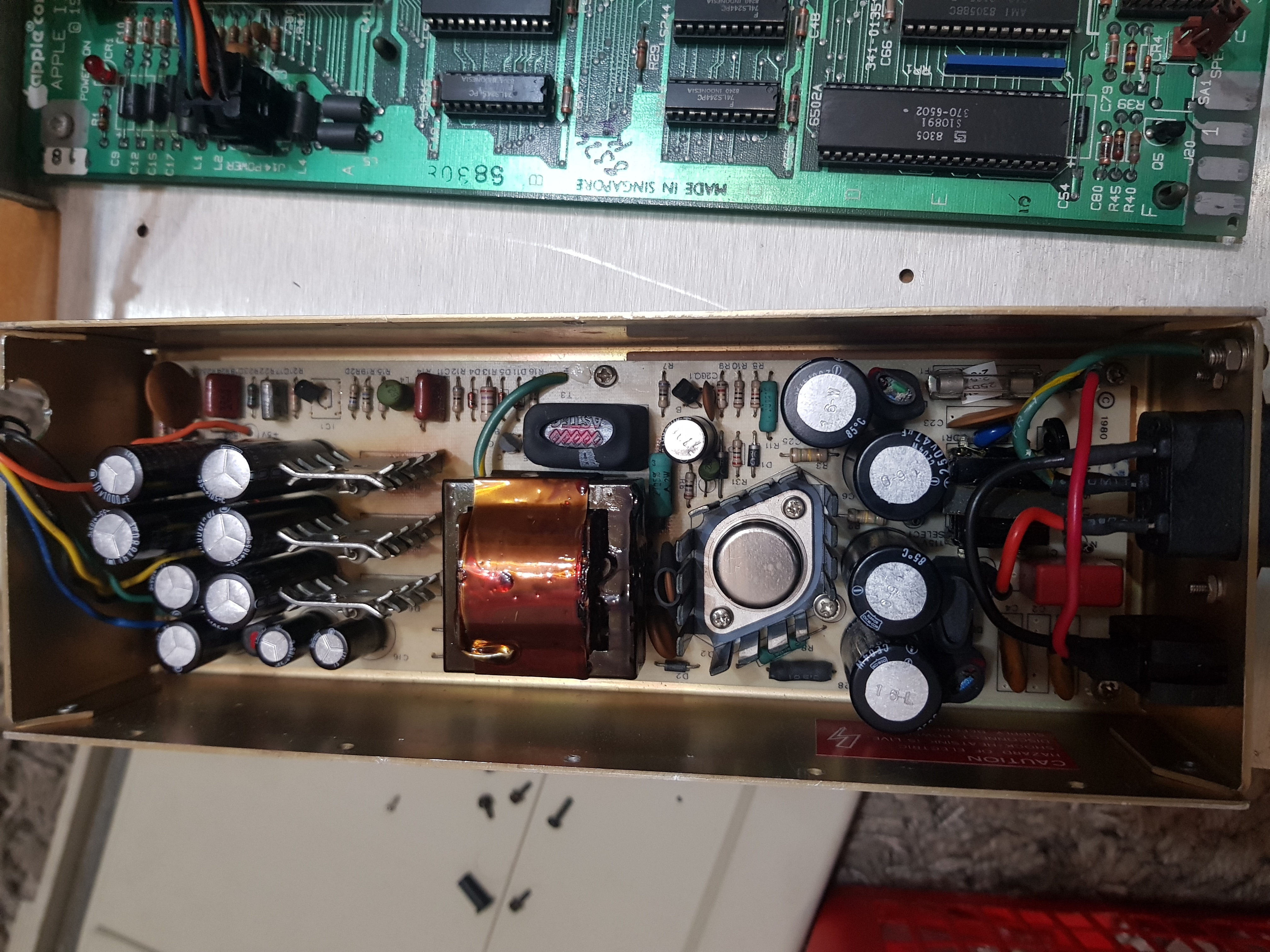 I would start by checking what happens to the PSU output voltages when it is connected to the motherboard.

I like to probe the capacitors on the motherboard right above where the PSU plugs into it, in your photo above - looks like C9, C12, C15 & C17. You should be able to probe those very quickly without leaving the computer turned on too long (which could strain components if you have a short).

If the voltage is collapsing there, you either have a dying PSU or a shorted component on the motherboard.

The most critical voltage for the motherboard is +5V - it carries the most current and supplies the most IC's, so if that is bad, you stand no chance in your computer working. 4.84V is a little low to me, especially unloaded since it probably drops a bit under load, however a lot of PSU's don't function properly unloaded. I won't say I am a guru in troubleshooting switching power supplies, but my limited experience has shown that the smaller electrolytic capacitor to the upper-right of the big heatsinked transistor would be one to suspect. A capacitance meter with ESR is very useful for checking for bad capacitors - you can buy cheap ones in the $30 range that do fine. I have seen where a bad PSU will start momentarily, charge up the output caps and then die not restarting, or cycling at too low a rate to keep the output stable.Since Apple used the same power supply through much of the II series (original II, II Plus, IIe and even the IIgs, but with a different connector, AFAIK), it would be helpful if you could substitute a known good power supply just to isolate that.

Lastly, you can quickly check the temp of the IC's on the motherboard while powered by touching them with your finger (I like to leave my other hand on the PSU to prevent potential static / ESD damage) and that might point to an issue. You can also ohm out the various power input lines (with respect to the gound plane) with the PSU disconnected and look for anything abnormally low. On a IIe motherboard I happen to have beside me, I see:+5V = ~0.7 KOhm-12V = ~2 MOhm (and rising if you hold the ohmmeter on it for a while)

Anything substantially lower than these would indicate a short on the motherboard (probably failed component)...

Youtube has some videos showing various aspects of testing/repairing the IIe PSU.

IMHO, never assume electrolytic capacitors as old as these are good.  Simple Ohm meter tests can be an inexpensive yet valuable way to beging testing the PSU DC outputs and the motherboard power supply DC inputs.  Powering up the Apple II/IIe PSU without a restistive load on each supply is not advisable.  That you state there are reasonable voltage levels on the plus and minus 12 volt and 5 volt outputs is good but that does not mean their output filter capacitors still act like power reservoirs to resistive loads.

First, disconnect the PSU from the motherboard and test the resistance between the board CIRCUIT GROUND (not Earth Ground) and the voltage supply inputs.  Start with a resistance setting of 10K or 1K and see what each supply-to-ground resistance reading is.  There should be at most a few hundred ohms or more between ground and the positive voltage rails.  Any readings lower than that indicates a problem on a particular motherboard voltage rail.

Second, with the PSU disconected and OFF, do the same ohm measurements with the power outputs of the PSU and circuit ground.  With the PSU you should measure each supply-to-circuit ground's resistance in both polarities of the meter leads and see similar results.  It is probably good to first take a single electrolytic capacitor of say, 10uf  - 1000 uf rated at 30-50 volts and see how the ohm meter readings behave when measuring positive capacitor lead-to-positive ohm meter lead and negative capacitor lead-to negative meter lead, then switching the ohm meter leads on the capacitor terminals.

Because the ohm meter provides a voltage across it's leads it will first charge the capacitor.  The reading should go from high resistance to low when this happens.  Reversing the meter leads will cause the meter to discharge the capacitor then recharge it in the opposite polarity causing similar meter response to the first measurement.

If when a capacitor is charged by the ohm meter the resistance reading gradually drops to zero ohms, the capacitor is leaking between its positive and negative plates and no good.

I'm sure others on the forum will have better suggestions. but good luck and stick with it.

Thanks Greg, much appreciated, so much detail cant thank you enough. Getting nothing from C9, C12, C15 & C17, removed board and checked pinout solder points at psu connector again nothing, not even a slight spike at startup.checked the temp of the IC's on the motherboard no heat issues. Going to leave for now, order a capacitance meter with ESR and replacement capacitor. Had a quick look for a replacement Psu nothing in Europe. I can only see a lot of talk about converting 110v US versions to 230v not sure how i feel about that. Still I do want to rule PSU before moving on so I will try and pick up a second working Apple this week. It will help with the learning curve, nice to have working examples to check against and ready supply of chips to swap, just need to sneak by wife. Again thanks Greg for your response, you're a gentleman.

Youtube has some videos showing various aspects of testing/repairing the IIe PSU.

IMHO, never assume electrolytic capacitors as old as these are good.  Simple Ohm meter tests can be an inexpensive yet valuable way to beging testing the PSU DC outputs and the motherboard power supply DC inputs.  Powering up the Apple II/

Cheers, Thanks for the reply and information very helpful and much needed advice.Taken on board  advice from yourself and Greg ordered a full set of capacitors for the psu and tester, Need to brush up on soldering skills. will check resistance on motherboard and psu tonight following your instructions will update thread with findings, thanks again for your help much appreciated.

Does size matter?  Replacing caps on PSU Nippon originally could not find a supplier in UK and wanted asap. Not sure what was a good or bad make, saw Panasonic thought that's a name I know. Order was not expected until Monday so I had reassembled Apple and packed away my wife wanted  spare room back . Email pinged at work today Capacitor arrived, Happy Days straight home unpacked Apple, stripped power supply down set up soldering station all set to go.  Opened  pack of capacitors. What the hell! New capacitor, a third of the size, straight to google should not matter, but come on look at it's embarrassing.

. But seriously does it matter and if so can someone point me in the right direction as to where to order a more manly sized capacitor of good quality and Breeding? 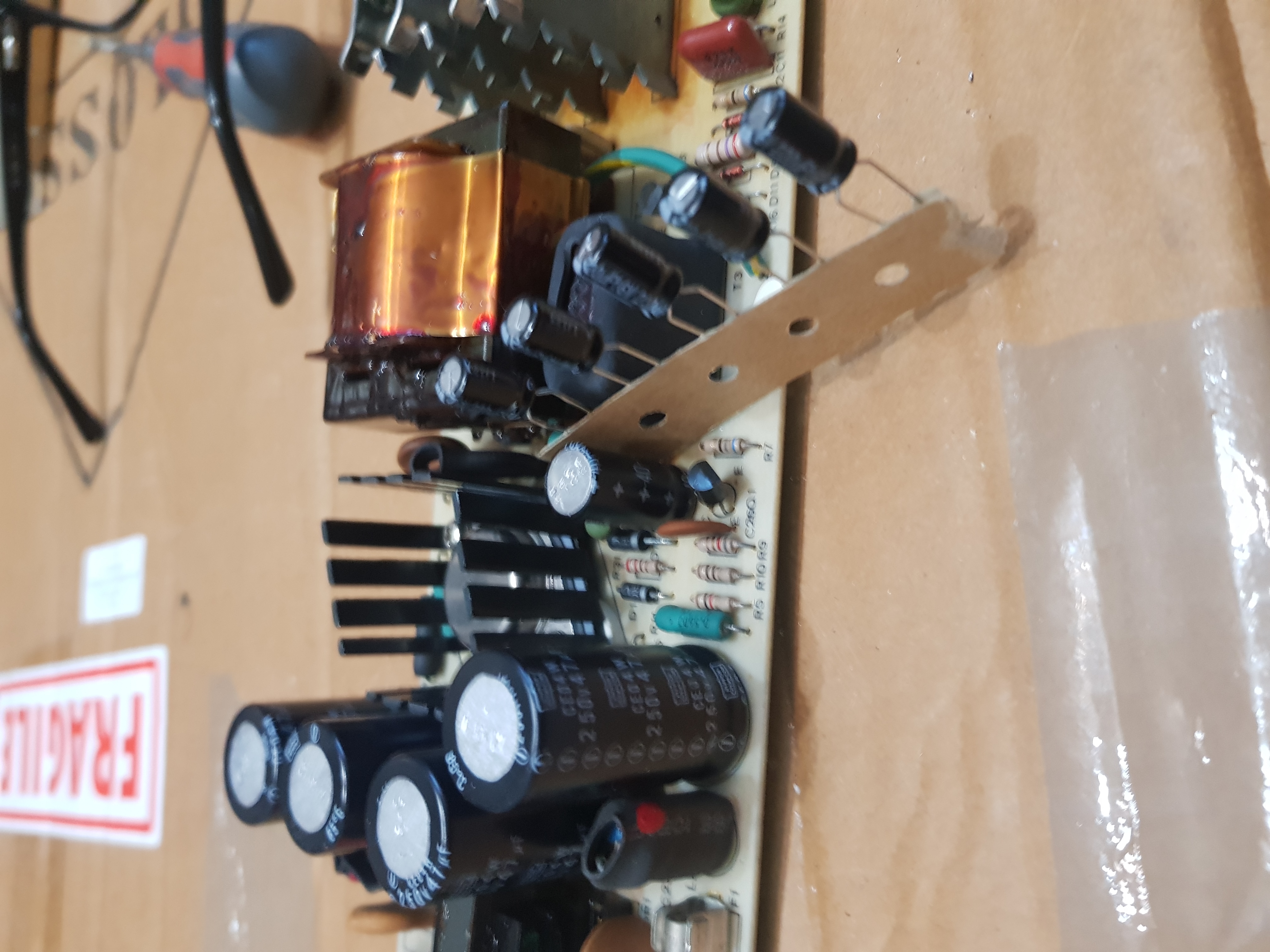 Large capacitor sizes have shrunk in the last 30-40 years. It's not uncommon for the same value capacitor now days to be up to half the size. Although generally they are closer to maybe 25% smaller.

If you really want a physically bigger capacitor, you can go with a higher rated voltage capacitor than the original. You can always go higher with voltage rating (never lower though), but stick to the original uF rating. Going with a higher voltage rating will even probably extend the life of the new cap as well. And I recommend sticking with 105c rated caps. That also extends the life in the new caps.

Panasonics are considered a very good brand of electrolytic these days. As are Nichicon, United ChemiCon (which is actually Nippon ChemiCon as originally used) and Rubycon. I personally stick to Panasonic and Nichicon, with the occasionally UCC cap.

Large capacitor sizes have shrunk in the last 30-40 years. It's not uncommon for the same value capacitor now days to be up to half the size. Although generally they are closer to maybe 25% smaller.

If you really want a physically bigger capacitor, you can go with a higher rated voltage capacitor than the original. You can always go higher with voltage rating (never lower tho

Cheers Nick, thanks for your help expected a bit smaller but a third of the size was shocked and bit worried thanks.