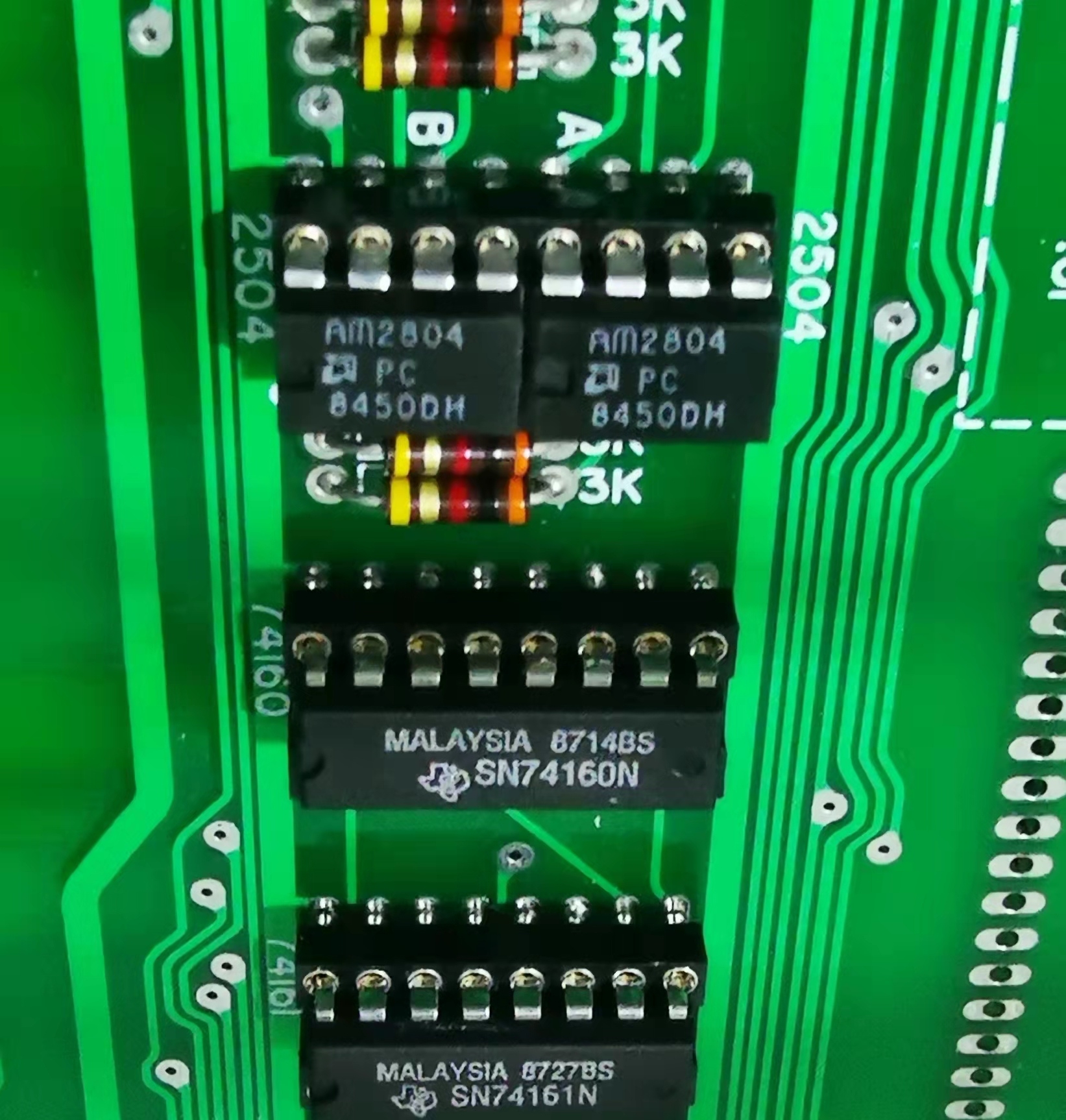 Have you verified this works in place or the 2504v and there aren't any issues?

The 2054v can be verified to work normally, which is difficult to purchase, so replacing the 2054v with am2804pc can also work normally. 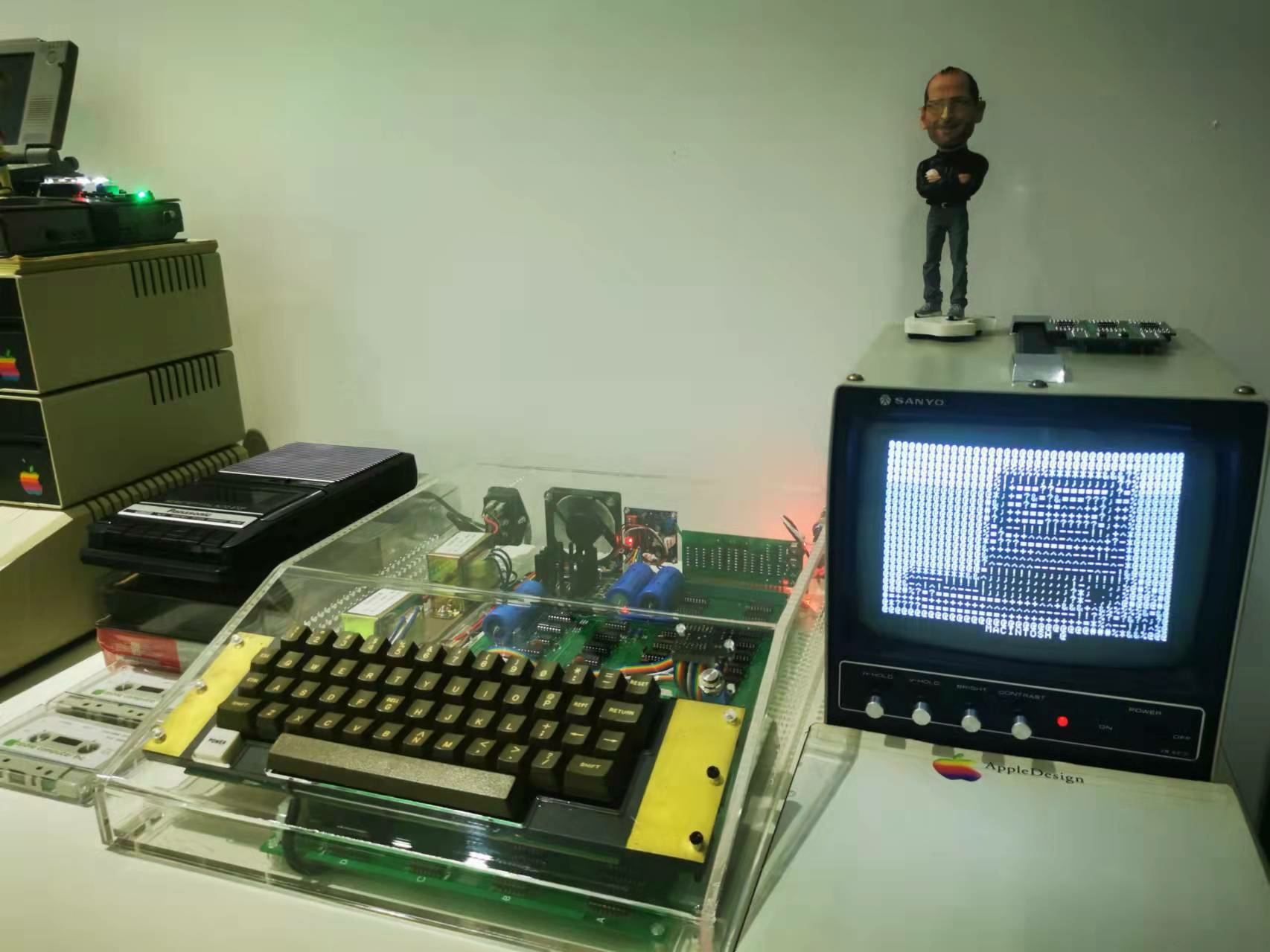 "Have you verified this works in place or the 2504v and there aren't any issues?"

Since "zhqfdn" did not answer, let me chime in:

I can confirm that the Apple-1 works with: AM1404APC, MM1404AN,  2504V, AM2804PC --- I have tested all these alternatives in my own Apple-1 builds, and I have sold many kits with the MM1404 and AM1404.  Alas, I have only one build using the Signetics 2504V. Not that the latter can't be bought, but the failure / "dud" rate of those is bad (approx. 30% of the samples I tested and then rejected to buy any more). Worst offenders were the National Semiconductors MM1404, about 50% duds. The best quality are AMD (the AM1404 and AM2804, which are the same thing, on the same datasheet, but the 2804 is specified to be clocked up to twice as fast as the AM1404 ... note the "up to" ... it will also work at the much slower Apple-1 speeds). Beware of sourcing "Signetics" 2504V from mainland China - land of the chip counterfeiters - some of my contacts warned me about them being re-stamped 555 timers, but the sneaky Chinese mixed real 2504V between their forgeries to have plausible deniability of malintent. Sun Tsu at his finest !

The only functional  issue I have ever seen (other than the duds) is that only National Semiconductors MM1404 did work with my fully LSTTL populated Apple-1 clone. All of the other types refused to work in it. This was the moment I regretted to have sold the MM1404 with my early kits. Should have kept them all to make LSTTL Apple-1, despite of the high dud rate. This is the largest pile of bad ICs in my "graveyard", see my post #14 in this thread:

BTW, to give you an update on the Apple-1 IC situation, at the moment there are more "real" Signetics 2504V available from U.S. based IC brokers than AM2804. Alas, the rules of the game (for some brokers) is: buy them all, or no deal. The largest stash of the "rare" Signetics 2519N (more than 5000) is in Jerusalem/Israel, but Avi insists to get $65 each. So no deal here, too. And guess where more than 1000 of the "rare" Signetics 2513N are sitting ? In Mexico City ! But they never responded to my RFQ. Maybe it's a scam. We will never run out of Mostek MK4027 or the TTLs, guaranteed. I'm currently working together with an awesome guy called Mike here in the U.S. who has 3 warehouses full of ICs and the best part is, lots and lots of old date codes among them ! Let's see what we can find ! 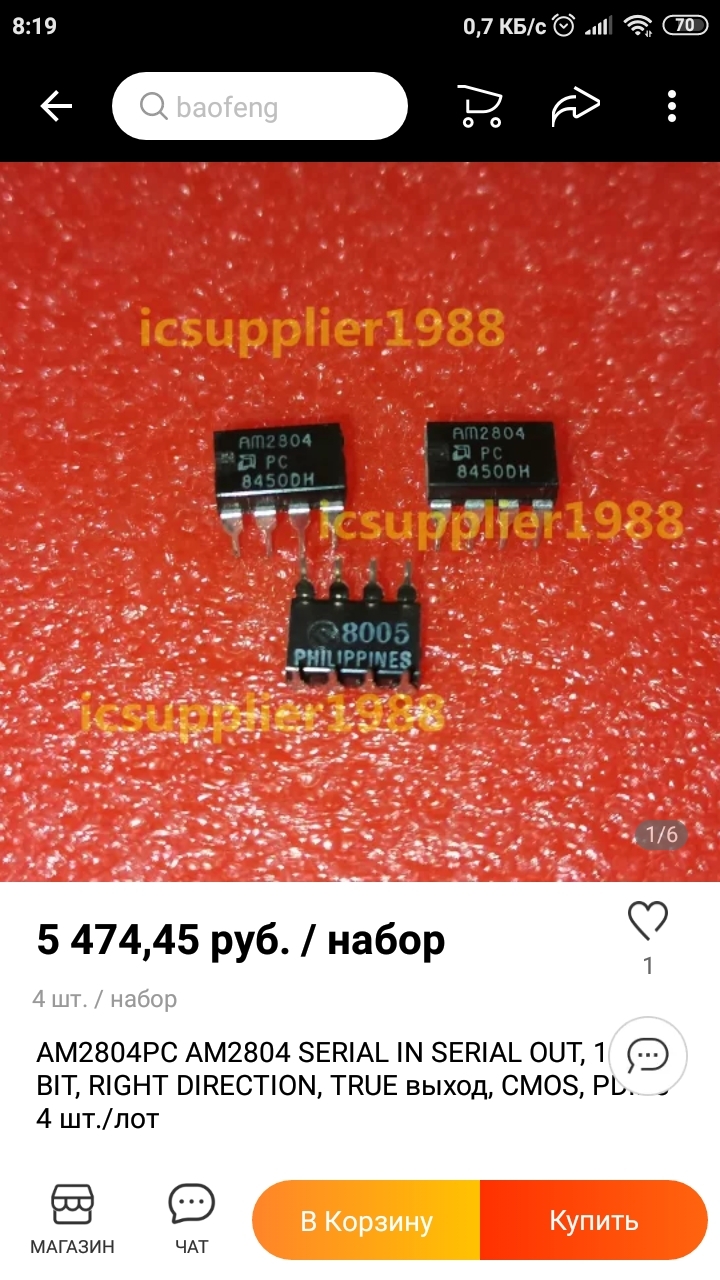 First, I did not bring up the topic of viable substitutions for the Signetics 2504V, it was zhqfdn in post #1.

Second, I would never, ever buy any ICs (or any semiconductors in general) from mainland China. Because of the many counterfeiters lurking there !

Third, everybody tries to gouge IC prices nowadays and claims "because of COVID". Idiots ! These greedy idiots think that they can sell a $1 IC for $100 each because some poor industrialist ("poor" hehehe) just paid some broker the $100 each for qty 5 to be able to finish and deliver five machines costing $250000 each. Which otherwise would sit unfinished and useless in a warehouse and the customer would sue for breach of contract.

In my 40+ years in the electronics industry I have seen these shortages several times. I remember the mid 1980s where there was a DRAM crisis and the prices asked for DRAMs - if you could find them at all - exploded. I had to stop manufacturing one of my products of the time. This, BTW, is one of the few products from the 8-bit homecomputer era which is still being developed and produced up to today, although by hobbyists, in small batches, and using more modern ICs (no DRAM anymore). So I've seen it all. We just need to wait and sit it out, and not give in to usurious prices.

A good, fair, price for AM2804PC if bought in larger quantities (some 100's) is $1.25 each. If you don't believe me, I still could find the invoice. How to make such a killing is easy: find a stocking broker (who has them really in his own stock and owns them) and watch them not to move for months ... years ... then call them and say you will buy them all at once, to the last one. You will get a really great price !

Oh, and I know an airplane graveyard where you can get a Boeing 737 wing for scrap value, essentially by weight, the scrap price recyclers would pay.

The key to get rich by buying and selling anything  is to understand that your profit is made in the buying part of the business. In the selling part you can only get what the market is willing to pay. You can't ask moon prices because only idiots or the desperate will buy at moon prices. Just look at the guy sitting on 5000+ Signetics 2519N. He wants the moon price of $65 each. Even if you buy 100's. So he won't sell any. Not. A. Single. One. And even if he would only ask for $17 each, how many of his 5000 he could sell ? The only end users of the 2519N are Apple-1 builders. In 20 years, about 500 clones were built. Since the Open Source Gerbers came out, I sold 50 of my famous IC kits. Which took a year. Do the math ! Somewhere in 20 or 30 years from now, the heirs of this man will throw almost all of his 2519N stockpile into the junk bin which goes to the gold extractors. And will get $5 per pound (current value of US$). Or even less. There is more gold per weight in old ICs than in the typical higher yielding gold ore, but still you won't get rich by selling them as scrap.

This iron principle of the merchant  class has been understood since many millennia. Make it / get it / steal it as cheap as possible and sell at the prevailing market price (or slightly below it if you want to bite the competitors off the field --- those who do this are called "discounters" --- only the word is new, the idea has been around for at least 5000 years).

I don't need the AM2804PC at this price, just saw it and shared it.

Neither does a wing from Boeing.

Me neither ! I fully agree ! This is what we all should do !

Never, ever buy a part at an usurious or unfair price ! Never !

This will teach the price gougers and usurers a lesson !

So we can vote with our money by not giving any of it to the usurers !

But if any one of us folds and pays a usurious price, this encourages the usurer and sets a new price point which is far too high !

There are a lot of smart people on this forum who have published alternatives, such as using 6 x CD4557 in lieu of the 2519N. As far as I am concerned I usually take a standpoint against these ugly daugthercard solutions, but only as long as the "spice will flow" (cited from "Dune" by Frank Herbert). If it stops flowing or prices get gouged up, use the alternatives and sit it out until the prices come down again to fair levels !

The situation with the 2513N character generator is not as severe, as there are many second source parts which are drop-in replacements. The GI part I've seen for $2.95 but they wanted me to buy all 200 they had, so no deal. It's easy to replace it with a small daughtercard holding an EPROM.

The 1kx1 dynamic shift registers once were ubiquitous and they were made by many manufacturers: AMD, National Semiconductors, Signetics, Synertek, all drop-in compatible. The communist block had their own copies once they had figured out how to make MOS ICs. These primitive shift registers were the typical early MOS product and I have a Signetics databook from year 1972 (!) in which all our beloved Apple-1 "core" ICs like 2504V, 2513N, and 2519N can be found. I have a Synertek Databook from 1978 in which the SY1404A still was seen. AMD made their AM1404/2804 until the early 1980s. And then these parts were pretty much obsolete. Nobody designed them into a new product anymore.

These shift registers are not easy to replace with RAM because you need to add a counter to the RAM. This would work but gets clumsy. A much better alternative would be to use some of the other 1024 bit dynamic shift registers like the 1402, 1403, 2802, 2803, 2401, etc., which have shorter shift registers but several of them (except the 2401, which is a dual 1024 bit in a 16 pin package that could nicely fit into the 16-pin Apple-1 sockets which now hold 2 x 1404, but some rerouting of traces required). All you need to do is to tie these smaller shift registers (i.e. 2 x 512) in series to get 1024 bit, and you can substitute the 1404/2504/2804. There also are plenty of static shift registers of similar bit count. There is only one feature to watch out for: the double pumping feature which is quite common with the dynamic shift registers may not be present on the static ones: then you have to modify the clocking logic to run twice as fast. But it can be made to work. Even the PCBs could be adapted to run with these alternatives and if these small mods are carefully done, the "looks" still would be the same.

The conclusion is that we have alternatives and so we can build fully functional Apple-1 clones and sit it out until the usurers come to their senses.

After all, unless they are idiots, they all know that ICs sitting in a shelf do not ripen and get better like great wines, and fetch higher and higher prices, but instead they do spoil and their market goes away.

So our tactic must be to never pay usurious prices for "our" ICs, use the alternatives / replacements and just sit it out !