There are several chips in the Apple 1 that are not very available nowadays, so it seems wise to provide reproductions for them. The chips might include:

The generic TTL parts will probably have good availability for quite some time, so there's no need to worry about those.

In low volume, one way to go is a small DIP-sized PCB with an FPGA and any appropriate power and signal-voltage translation. This would plug right into the target socket. As a start, I've done the HDL and PCB layout for a PROM board, available here:

Attached is a screenshot of the board and a schematic PDF. You can see the holes for the 16-pin DIP pins along the edges of the board; eventually it might be nice to replace these with a DIP lead frame (tin-coated 260 brass?) that would offer more realistic pins.

This is a work in progress and nothing has been tested yet. I've sent off the small boards to OSH Park and should get them in a week or so. There might be showstopper errors in it.

I've also included in the github repository the schematic and layout of the Apple 1 cassette interface. That is also untested (I don't have an Apple 1 yet). If someone wants to fab and assemble one of those and test it in an Apple 1 replica, that would be great. I would suggest the ENIG finish for a prototype board---it's not as durable as electrolytic hard gold, but should be fine for a quick look. 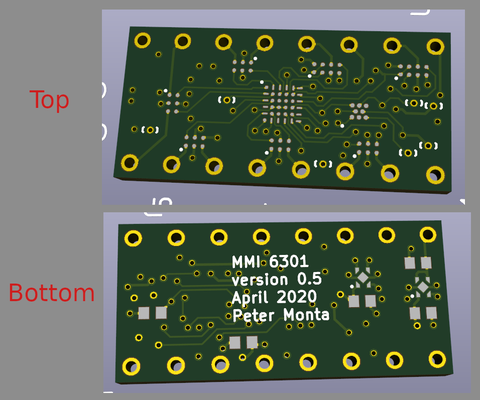 I understand your pain with the obscure chips every 1st time builder of an Apple 1 replica faces.

I am currently bringing up my own Apple 1 build, which still has some quirks, but the stay-at-home orders due to this virus pandemic certainly helps to provide the spare time to sort them out.

Here is my take on the parts situation:

PROMS - I don't have any programmed ones yet, just ordered a Data I/O programmer on Ebay hoping it works. But I have close to a thousand of various 256 x 4 bit PROMs in stock, although the MMI ones may be only half a dozen, if I can find them. My build currently runs with an adapter card that plugs into the PROM sockets and carries a 2732 EPROM with various diagnostics besides the WOZmon.

Signetics 2504 can be replaced with the generic 1404 type shift registers, which in the 1970s were made by many manufacturers. I used MM1404AH made by National Semiconductors. Several brokers have them. The key here is that several builders should team up and buy a bunch so as to get better prices.

Signetics 2513 character generators: I have a full tube of them and might part with some of them.

DS0025 can be replaced by the more readily available DS0026  if you put 100nF SMD bypass capacitors directly on its -12V/+5V pins to GND. The bypass caps C5 and C6 on the board seem not to be sufficient (traces too long ?)

Anyone interested into building an "authentic" looking Apple 1 replica (or repair an original) should also look into the grind top surface away / reprint new type code and manufacturer logo by rubber stamp, as the Chinese chip counterfeiters do.

Alas, just a look at the PCB would immediately reveil it's a faked Apple 1.

But other than the 2519, and the ROR bug, everything is still available.

Disclaimer: the above parts replacements may have contributed to my Apple 1 build being somewhat quirky. But the more I look into it, the more I think the Apple 1 never was a stable and robust design, the PCB 'ringing' everywhere possibly being the culprit for most of those grievances. Maybe we should go to a four layer board that retains the original layout on the visible top and bottom layers and adds a sound ground plane and a good power suppy grid on the invisible inner layers.

Did the original Apple 1s built by Apple have the ROR bug? The fixed CPU was released no later than May, 1976, if the date on the datasheet documenting the ROR instruction is any indication.  From the story about about  the Byte Shop units and getting the parts on 30 days, that means they didn't get the 6502s from the supplier until around June 1976, which makes it plausible that they may not have had the bug. (I've asked about this, but gotten no firm answer. Maybe someone here with an original could do a test and post about it?)

I too also wonder about the value of producing a modern 6502 replacement with the ROR bug. Software written with the ROR bug in mind won't work any differently, so the only difference would be that software that uses ROR would break, rather than run, right?

Yes they did.   Only the last boards out of Apple had a fixed CPU.  This is one reason Mike Willegal has to make a special version of his memory test software which would run on original Apple-1 boards.