Someone over on Reddit seems to have located a "new" version of the Apple //c diagnostics compared to the only version on Asimov.  This supports the newer ROM 3/4 versions, as it has an extended memory card test.  The existing version on Asimov seems to only like ROM 255 machines and forces you to have a serial loop back cable.  This one lets you skip the serial test if you don't have the cable.

Interestingly, I ran this on my rom 4 and found something odd. There is a system status screen in program. It says "current rom version: 06 (original IIc ROM)". But if I do a "print peek(64447)", it does in fact return a 4. So maybe Apple numbered them differently than what people generally go by? My rom 255 is currently packed up. Maybe I'll dig it out tomorrow and see how this reports the rom version on that.  It also says "memory card status: not supported with this rom". I do have an a2heaven 1mb expansion card installed. And it did pass the extended memory test. So I wonder why this rom is listed as not being able to tell the status of the card.

I love that the OP shows the program running on a //c with what looks like the Byte font from the ROMXc. But then I realized he must have that permanently installed or he could have easily tested all of the standard System ROMs at once! 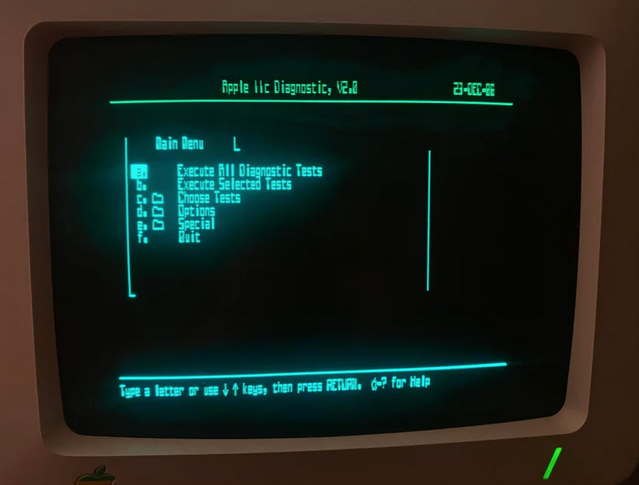 I did notice the font and figured he might be using ROMXc, but was too tired and not thinking clearly last night. But I think the OP is running ROMXc. The thread was updated to show additional rom versions, so unless he have 3 Apple //c's, I think ROMXc is in play. The update says:

So now I'm curious why it detects my rom 4 as a 255. Maybe this was written between when 3 and 4 were released? But then I would expect it to fail the rom test on mine, as it wouldn't recognize it. But it passes.

Actually, turns out this isn't exactly new.  I did some more digging and noticed references to other Apple II computers in some of the files on the disk.  So I used MAME and found it also works on IIe (both enhanced and unenhanced - if you downgrade ProDOS to 1.x instead of 2.0.3 on this image).  It alters the available tests and even draws them menu slightly differently when in IIe mode.  So in reality, this seems to be a combined IIe and //c test suite.

So I went back out to Asimov and looked in the diags folder.  In there are "A2eDiagnostics" versions 2 and 2.1.  The 2.0 version there seems to be identical to this version.  It boots on my //c, changes the header, and shows //c specific info.  It also incorrectly identifies ROM 4.  But version 2.1 will correctly identify my ROM 4 as saying "Memory Card IIc ROM-revised" and detects my memory card.

My guess is since it modifies the header based on the machine running it, whoever named when it first got uploaded to Asimov probably booted it on a IIe and didn't realize it can also test //c.  And since the file name implied it was for IIe only, no one probably thought of booting it on a //c.

So now that it's been proven that these are combined IIe and //c diagnostics, how would one go about getting them renamed appropriately on Asimov to make it clear to anyone else who might be looking for //c diagnostics?