Hi there everybody, this is my first post, thanks for reading and helping me (hopefully)

I'll get straight into it, I pulled this machine out of storage and attempted to fire it up. It would beep, but nothing on the screen and pressing keys caused the speaker to go nuts. After heaps of testing, searching and downloading schematics, I ended up getting it working (dead 74LS74 at B10).

But in true engineering style, that wasn't enough. I needed to test some of the cards I had laying around and while doing this I think is might have pulled out a card while the power was on!

Well now its dead. See all the photos at the bottom of this post. Now it has no beep and screen is basically all 'white' with random things on it. A reset button press changes the screen a bit.

These are the things I've tested:

Photo of when it was working:

So, I'm a bit stumped. Also to make matters worse, my Apple ii has a custom F8 ROM (see above) and my board has an E2 chip (74LS02, which I replaced because it wasn't firing any outputs. But it turns out isn't really used because most of its legs are not connected to anything (see below). I read somewhere that E2 is not used or has been replaced on certain REV boards. In mine one of the its outputs is connected to pin5 of F12 (E2'), one of the inputs is from peripheral slot pin32 and the other NOR gate drives nothing (open circuit) and the remaining 2 NOR gates are not connected to anything.

Would anyone possibly be able to suggest what I should check next? My logic analyzer is only a 4 channel unit so I can't really monitor the whole data or address bus. 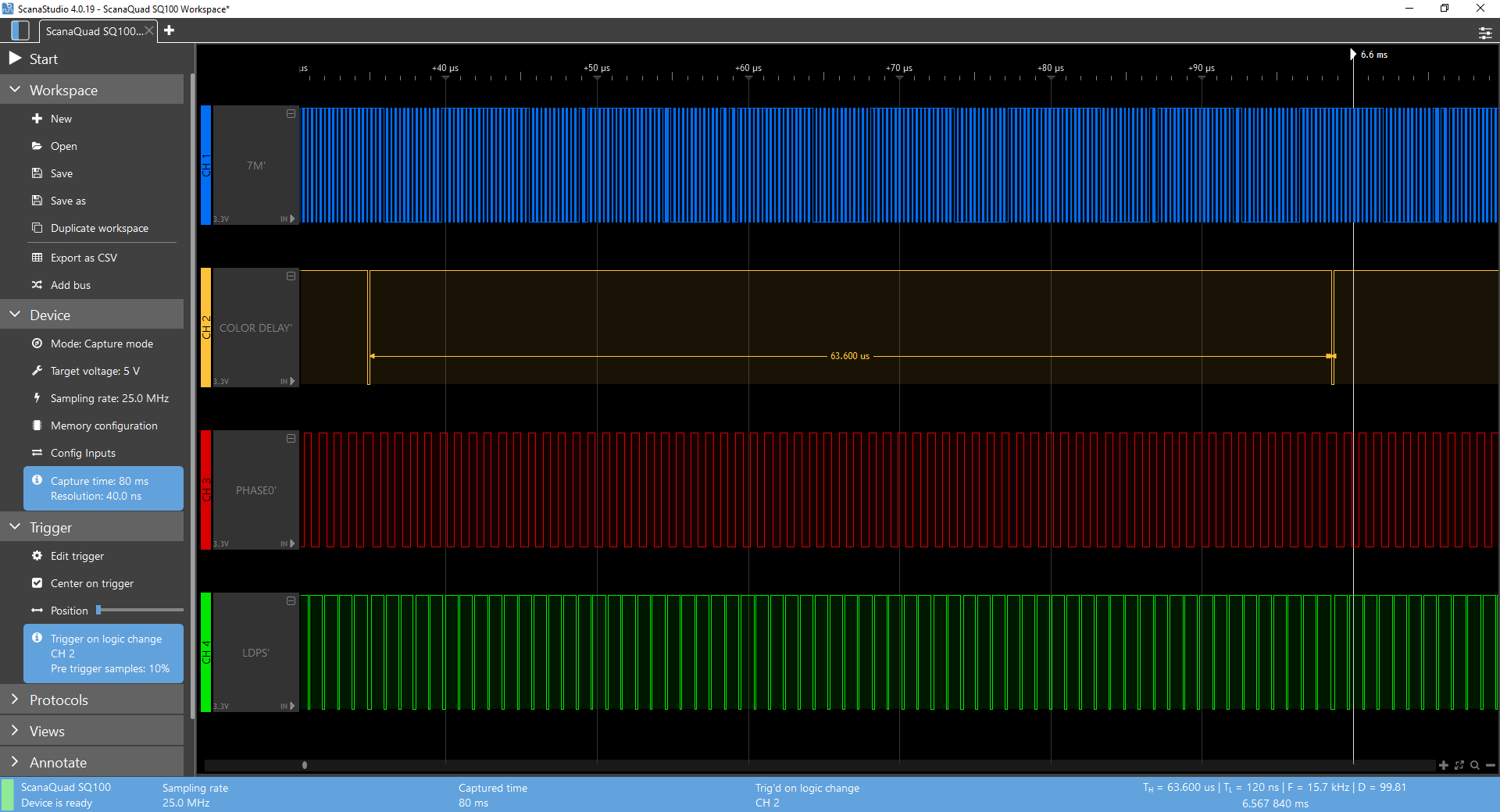 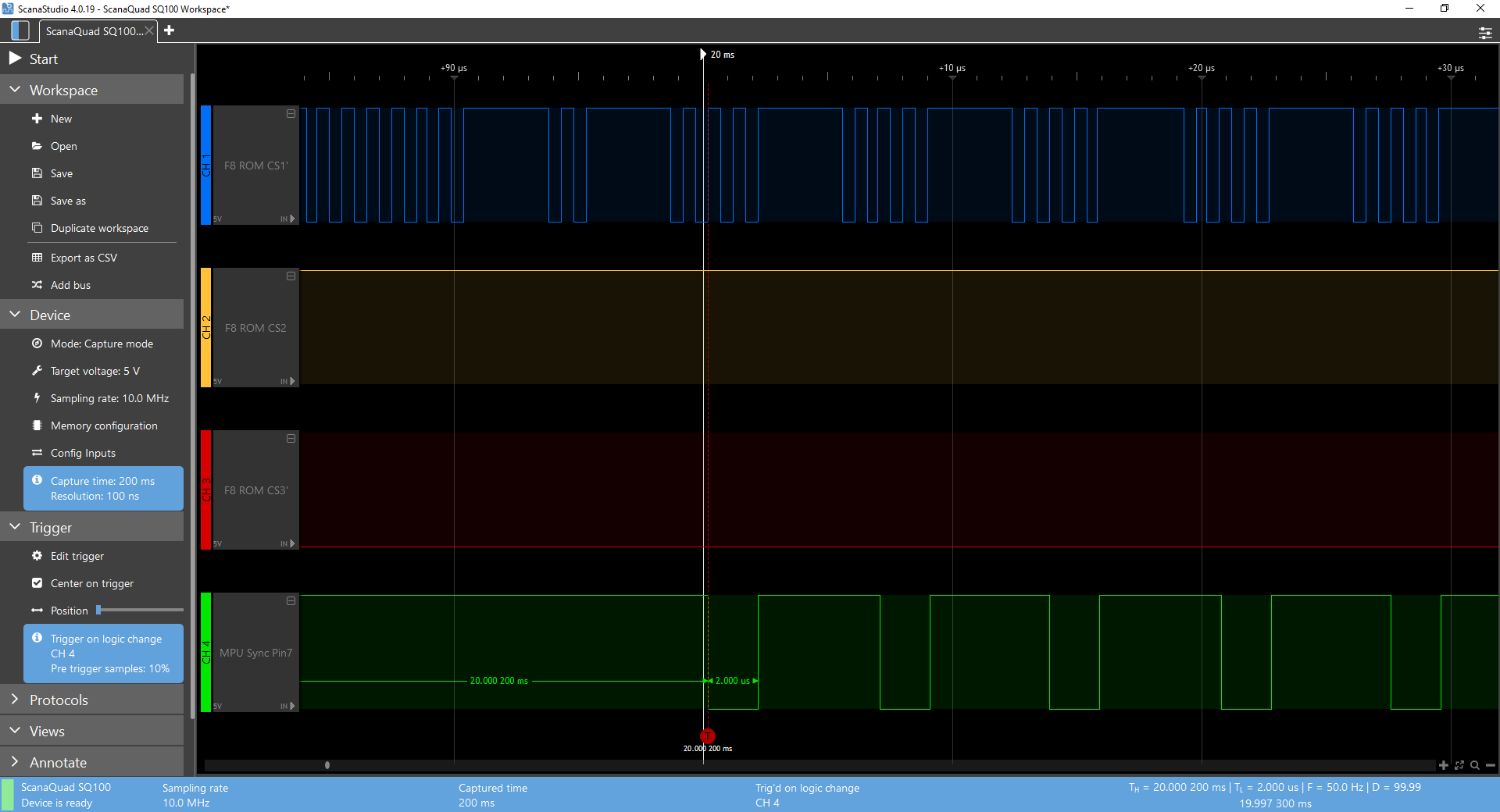 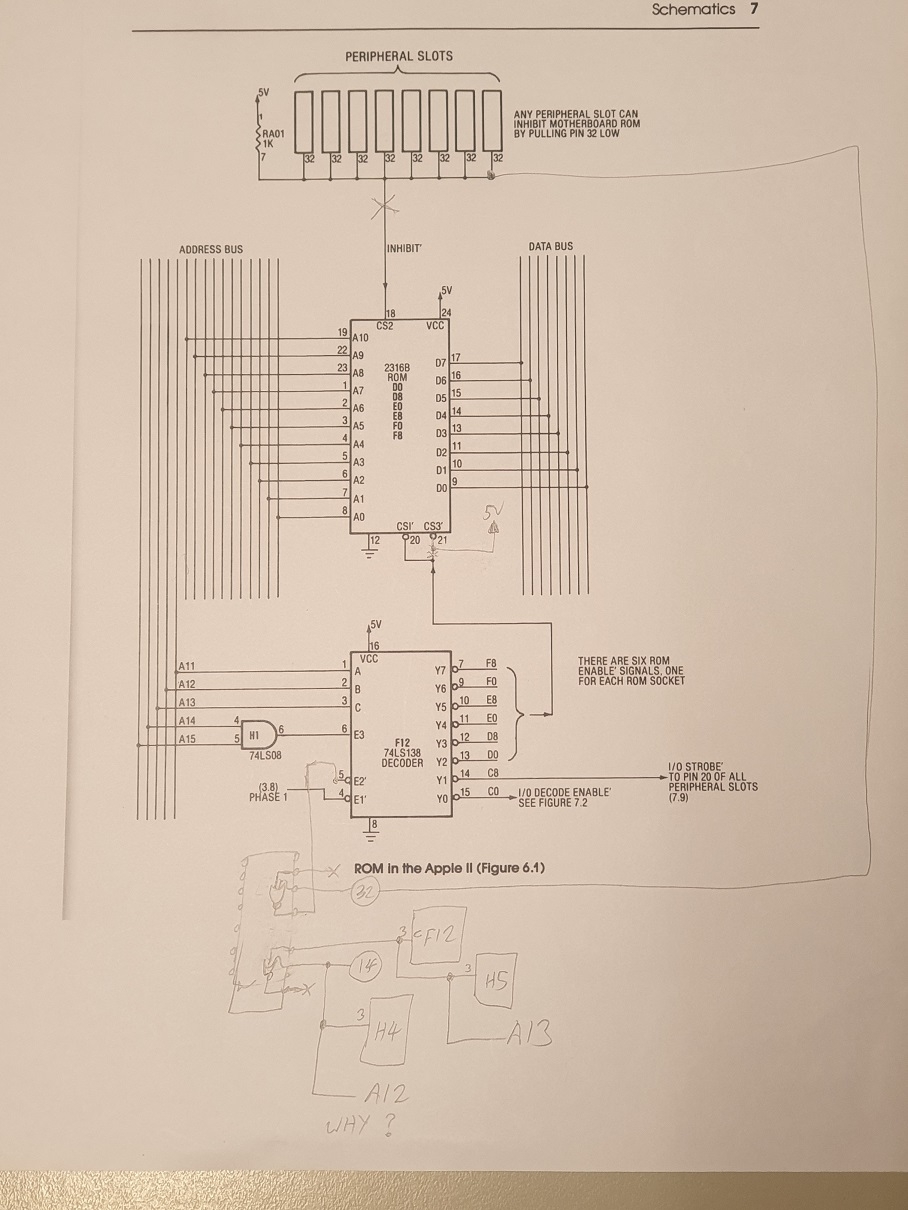 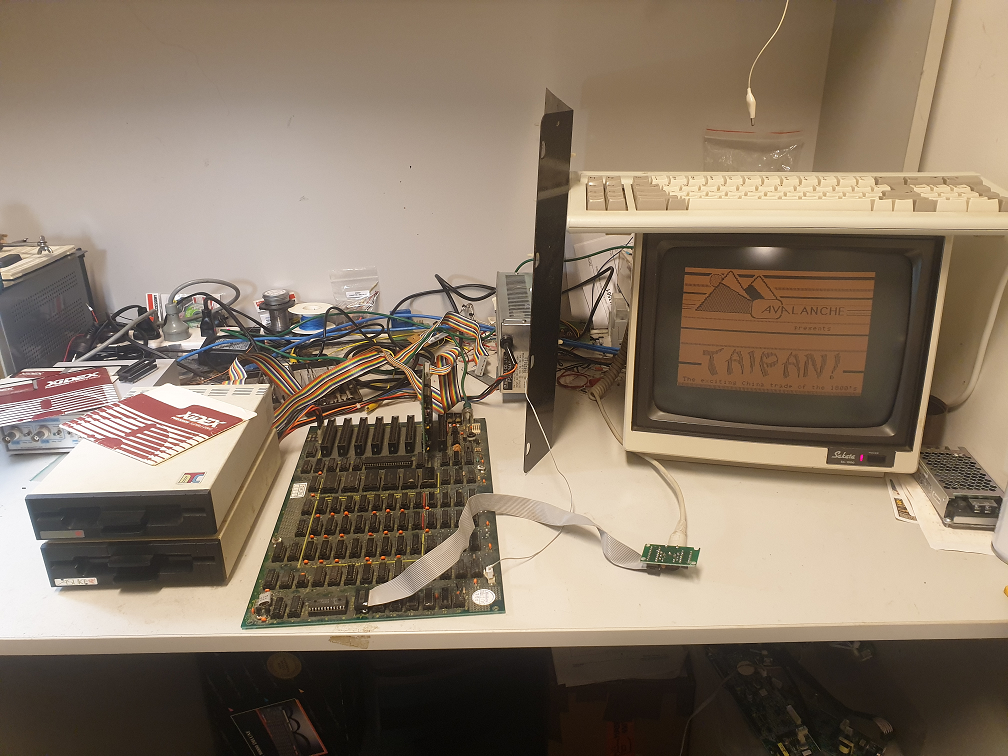 This is after I killed it: 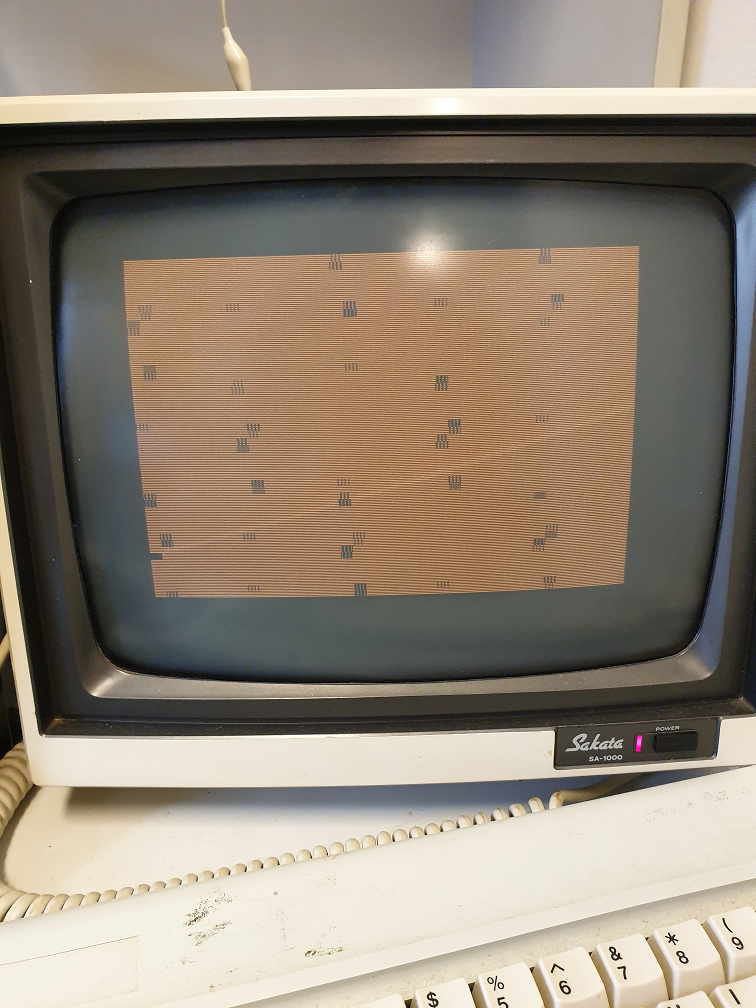 Large image of the top of the main board (I have more photos, note there is nothing unusual on the back, no wire links or specially placed resistors or the like): 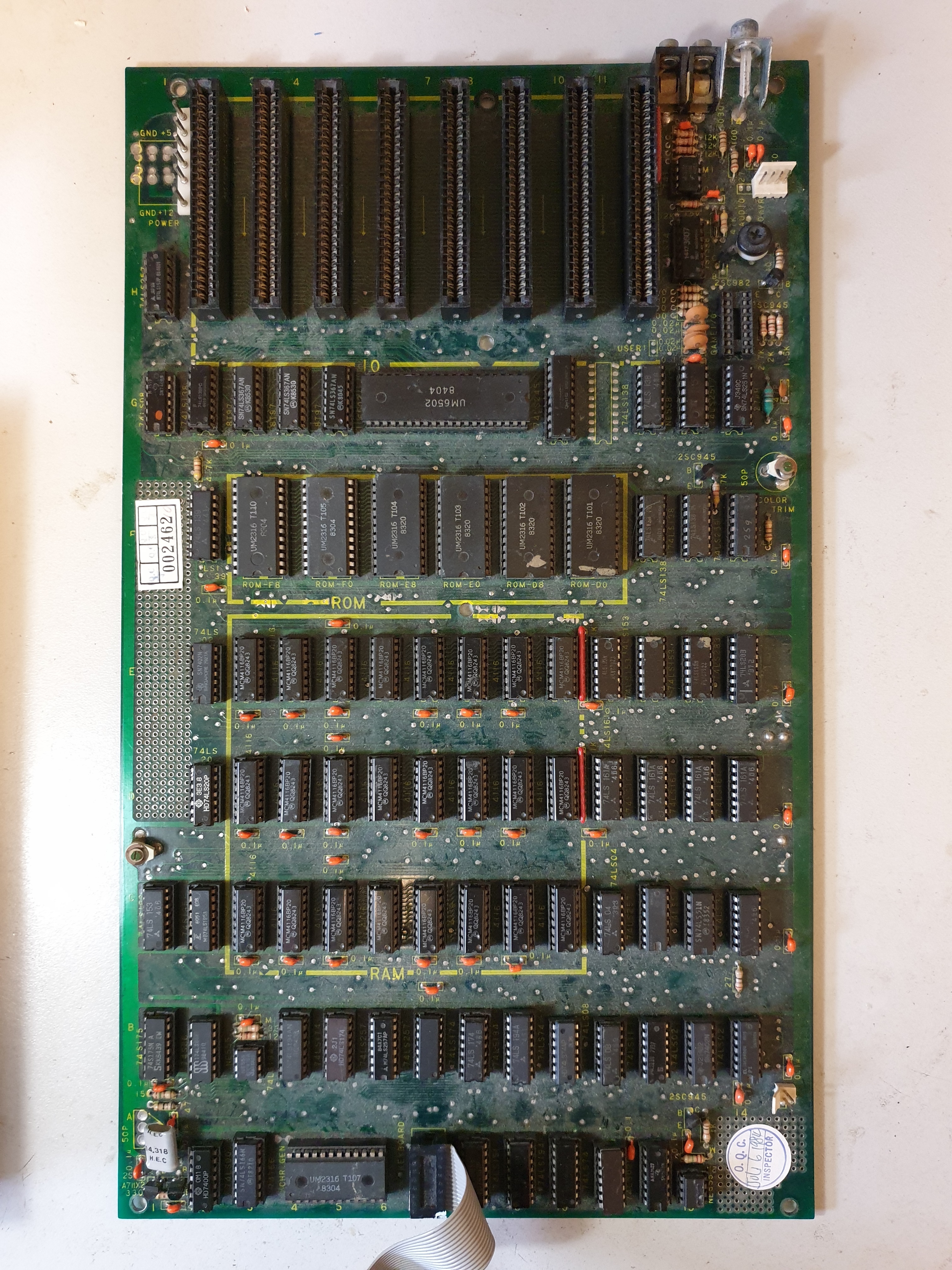 You have an issue reading RAM or ROM.

And that F8 ROM is pretty much identical to the Apple F8 ROM except for the bootup string and the fact that it allows lower case input directly from the keyboard.  A common Taiwanese lose tactic, and I have the same F8 here.

Start with H1 and then the chips in row G.

Also, if you have a RAM tester use it to test your RAM chips.

The machine will successfully boot with the lower 16 K so remove all the RAM chips in rows D and E.  This narrows down any potential RAM issues.

Hi there Baldrick, thanks for your reply.

I've tested my H1 (J1 if you look at uaii.pdf, which doesnt have a label 'G', but mine does), the outputs appear to be switching, what does that mean?

I dont seem to be seeing anything on pin7 or pin9 of C12, is this normal? I'm not in HIRES, so does that make sense? 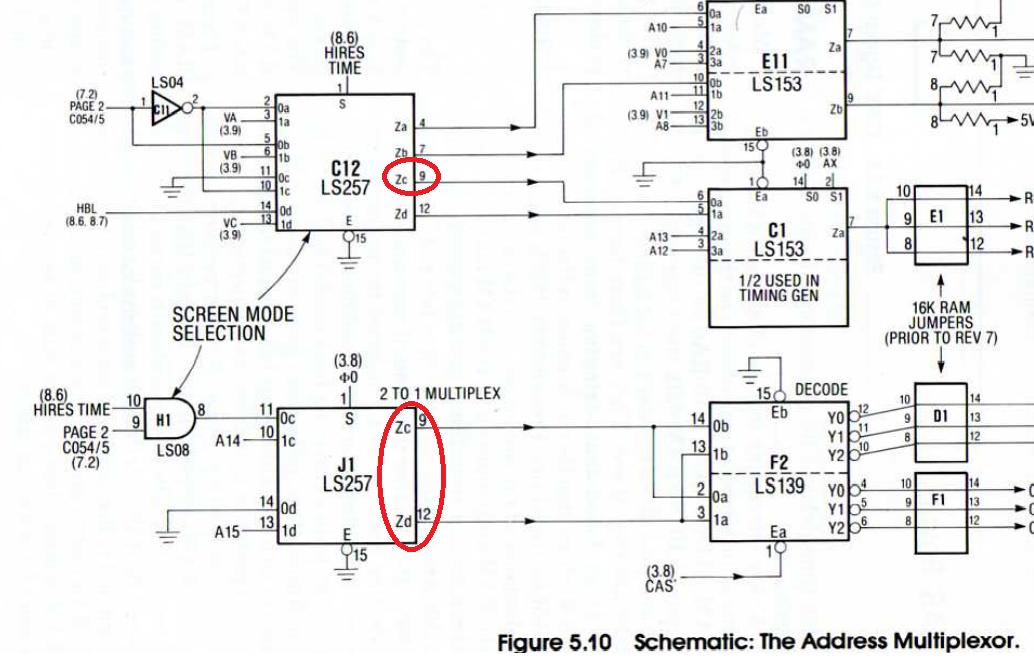 It also appears that what I see on these outputs is different each time I turn off and on. Also after a few seconds of being switched on pretty much all output switching sort of stops. Like the MPU locks up or something.

I havent had a chance to remove all RAM chips in rows D and E yet, I'll do that tomorrow night. I dont have a RAM tester. Also what am I looking for in row G?

Unfortuantely, most of us have caused ourselves this same problem if we have been doing this very long.  It is so easy to get in a hurry.

In an Apple II, any failure in the first bank of RAM breaks the whole boot process.  Getting known good memory in the first bank is critical and until that happens, nothing else really matters. It will boot without any cards to an Applesoft prompt with only 16K installed.  Pull out all the RAM not in the first bank and see it you get a ] prompt.  If so the RAM is good, else start swapping  RAM one chip at a time until you see differences.

It is possible you have more than one bad RAM.  Since the text screen memory lives in the first 16K, you will see changes in the characters on the screen as the bad RAM chip which controlled one bit in the character is replaced.  You can do some binary math and ASCII comparisons on the changes to determine likely culprit chips, but I find it easier just to walk the bank of 8 chips and observe the results.  Often, a bad chip will be noticably warmer to the touch than the other chips and that fingertip test might shorten your search for failed RAM.

Take your time. Make sure you remove power before replacing RAM chips. :)

Hi there Baldrick, thanks for your reply.

It also appears that what I see on these outputs is different each time I turn off and on. Also after a few seconds of being switched on pretty much all output switching sort of stops. Like the MPU locks up or something.

I havent had a chance to remove all RAM chips in rows D and E yet, I'll do that tomorrow night. I dont have a RAM tester. Also what am I looking for in row G?

Don't worry right now about the address multiplexor changing state.  It all sort of collapses if the CPU can't address (or read) the ROM and RAM it is looking for at startup.

The chips in row G to the left of the CPU handle addressing.  Many times (although not always) they can be damaged when you pull out a card when the machine is powered up.

Also, the 784LS02 you first mentioned needs to be working properly or the CPU can't address the F8 ROM properly.

That 'LS02 is not in any of the Apple schematics (because on real Apple II+ machines it does not exist) and I had a devil of a time once troubleshooting my clone until I stuck a language card with an on-board F8 ROM on it in slot zero and the machine booted right up to the Applesoft prompt.  That's when I knew that the 'LS02 was fried because the F8 Language card overrides the on-board F8.

Anyway, keep trobleshooting and let us know how you make out.There's a little side-project you could do also to make your own 4116 RAM tester for under $50:

I'd check the bus transceiver chip at G10. That could cause the issue you are having.

As previously mentioned, the added LS02 is to allow the use of 2716 EPROMS. It basically substitutes an active low signal when adressing D0xx-FFxx for the Apple's normally high INH signal. The ROM is probably OK, but if you do find that one or more need to be replaced, you should consider getting a ROMX.

Hi everyone, again, thanks heaps for replying to my post. You've given me great feedback. I will do each of the things you've suggested. And I'll take a moment to slow down and think before pulling things out of the board.

Also that ROMX thing looks awesome, what a cool gadget. I wonder if they ship to Australia.

Thanks again, when I get back to my workshop for more investigation, I will report back.

It's a neat card.  But can sometimes be inconvenient to use and gets hot.

My preference is the VGA Scaler from A2Heaven.  But it is often out of stock (email him via the website and chances are he'll make one to order).

I use them.  The output is great.  I think they are worth it.  I mostly use them so that I do not have to use the old monitors.   But maybe I will do some video capture soon.

Hello again everyone, just a quick update. I checked the temperatures of all the ram chips and they're all running about 21deg C. Ambant temp was between 13 to 14deg C.

On a different project I had made myself a thermal image camera out of an MLX90640 chip put together by Adafruit, which i stuffed into an old Pentax compact camera. So I thought this might be a good opportunity to use it :) 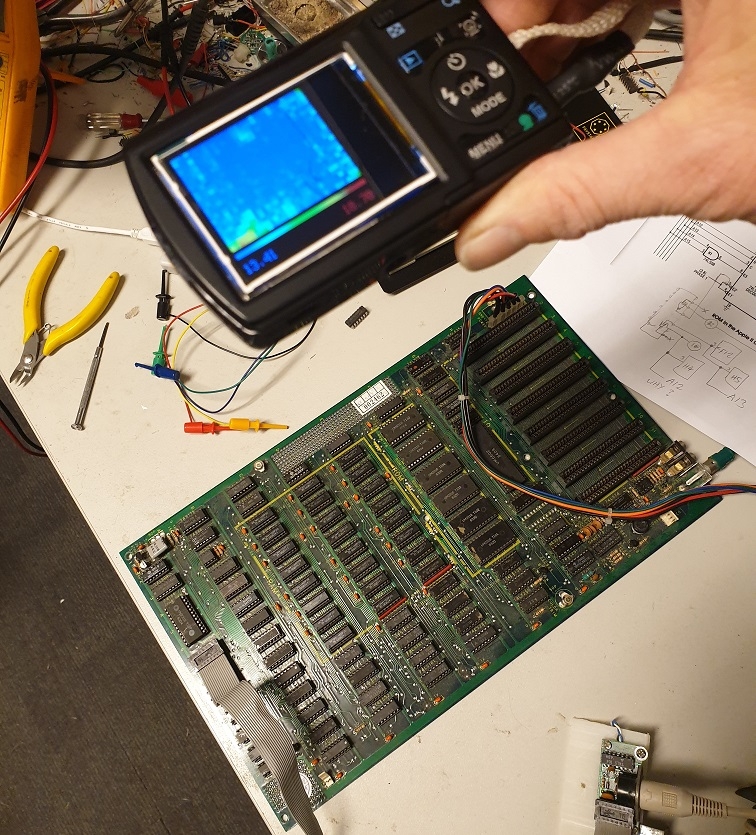 As can be seen, the ram banks are the hotest thing in the feild of view and it reads about 21deg C. 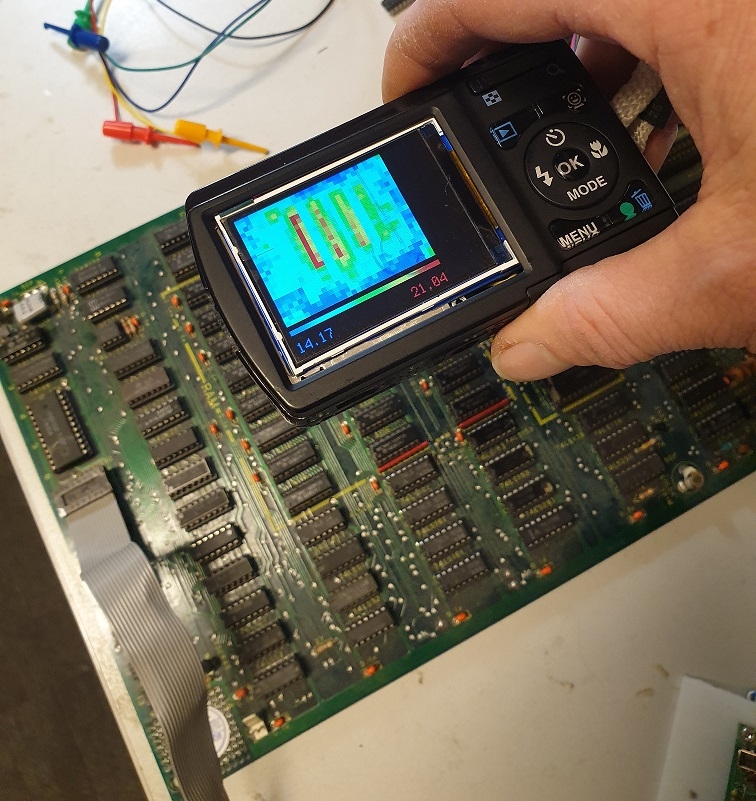 I moved camera all over the board and there are a couple of other chips about the same temp, i.e. the MPU and some down in rows A and B on the left side.

So next I removed all the ram chips and switched it on. I get a completely white (orange) screen, very stable, no random characters., even when I press the reset button.

I guess I need to buy a ram tester? Any other thoughts? I do have a 16kB ram card, my next test is going to be to remove all chips from that and try in row C.

Thanks again for all your help and I'll report back soon,

My money is still on RAM or ROM addressing.  One of the chips around that circut is faulty.

I'd look at Sam's Apple II Troubleshooting and Repair Guide for more information.

It has nice symptom based troubleshooting procedures and circuit descriptions.

And it points to either a bad CPU (unlikely, but Possible), a bad F8 (same likelihood).  But on a clone, that chip at G2 is the one I always look at first.