I have a //c serial to parallel/centronics converter box from when I was a kid.  I still have the matching parallel printer, but sadly it doesn't look like the ribbons are available any more.  I have since acquired an ImageWriter II (which does have ribbons available), so I don't need to use this.  But I recently picked up some Epson FX compatible Commodore printers that have both the Commodore serial and centronics ports on them (and have ribbons available).  I was thinking about testing out printing from my //c to one of them.

Problem is, I don't recall exactly how this converter worked.  Mainly, does it require power?  It has a 3.5mm jack on the side that presumably is for power.  But there is no regulator inside it, so I'm guessing if it did need power, it would need to be 5v.  But as I understand it, some of these converters didn't need external power.  I'm guessing they siphoned off the 5v form the printer side of the interface.  I don't recall if I had to power this when I was a kid or not.  I don't think so, but I can't be sure after so long.  I can't locate any instructions for it in my pile of old Apple manuals.  Its a Kameleon by Intronics, model 110.  Goggling that leads to pretty much nothing.

Is there any way to tell if this does need power?  I can trace out some of the pinouts if it would help.  Here is a picture of the innards. 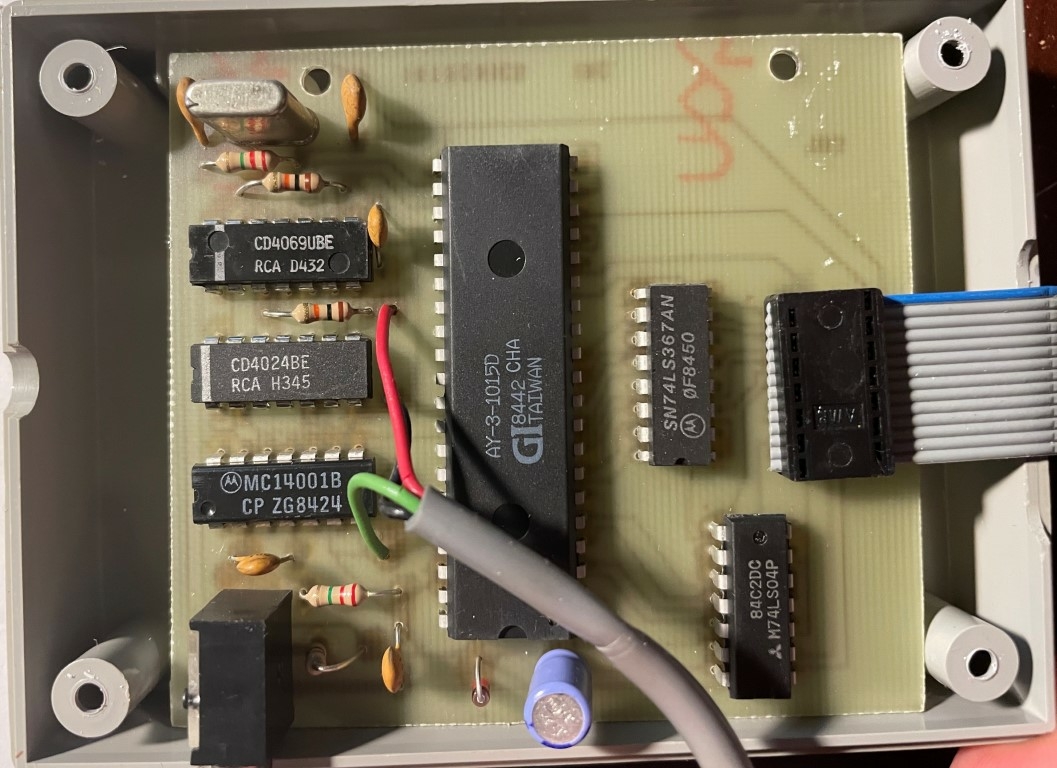 Check out the electrolytic cap at the bottom of the board. See where its positive side goes.

Funny story. Eons ago I designed a circuit to add a CR for every LF on a parallel interface. The circuit was built on a powered breadboard unit, and once while I was testing it I forgot to turn on the power. BUT THE CIRCUIT STILL WORKED! Blew me away at first until I realized that the circuit was getting power from the Data lines through the input clamping diodes of the CMOS IC's. Made for a really compact converter.

Is that a Grappler IIc box or similar?

I thought the Grappler IIc had a dip switch for settings...

If so, I think it is 9VDC power input.

I have a Hotlink (also Orange Micro) parallel interface box for the IIc and it is a similar form factor, however it gets its power from either the printer's centronics port or the serial port itself (there is 12V there on the signal lines) and has no power port.

It's not a Grappler, I mentioned in the first post it is a Kameleon by what appears to be a defunct company called Intronics out of Kansas. May have been a mom and pop type of operation considering whatever address Google thought they had at sometime is showing up as someone's house. There are no settings or dip switches

I traced out the positive side of the electrolytic cap, and it goes to several places, but namely pin 18 of the centronic connector . Which is a +5v/50ma pull up from what I found. So it does look like it can self power from the printer port. The ground seems to go to pins 16 and 29, which are logic ground and signal busy ground. The power Jack connects to the +5v line through a 220 ohm resistor.

I dug through some of my other Apple II stuff, and found the instructions for this in the back of my 5.25 disk caddy of all places (not sure why I didn't keep it with all my other manuals). And it does confirm that most printers will self power the converter, but some like Epsons may not. In those cases, you should use the included power adaptor (no power specs are given in the manual). Which since I did not see a wall wart in the box with this, I can only assume my old C.Itoh Prowriter Jr did power it. So I know it uses +5v. But I wonder if that 220 ohm resistor is there to drop what would have at the time been a much more common +9v wall wart?

But now the manual raises some questions about printing from ProDOS basic. A little while ago I noticed I was having trouble printing from ProDOS 2.4.2 with my IW2 and just doing a PR#1 and doing a list or whatever. I found that I had to override the bit setting to 8 using the ctrl-I commands after issuing a PR#1. If I used the last official version 2.0.3, I didn't have to. I could print directly without changing anything.

This manual indicates that the //c default ProDOS printer port settings were 9600 7n1. But I know the IW2 wants 9600 8n1. And I printed fine with 2.0.3 basic. So now I'm wondering if Apple originally set the port to 9600 7n1 in early 1.x ProDOS versions, but then changed to 8n1 in later versions. Then when ProDOS 2.4 was worked on, it got reverted to the original behavior of setting 7n1?

It's not a Grappler, I mentioned in the first post it is a Kameleon by what appears to be a defunct company called Intronics out of Kansas. May have been a mom and pop type of operation considering whatever address Google thought they had at sometime is showing up as someone's house. There are no settings or dip switches

I traced out the positive side of the electrolyti

I would be surprised if that 220 Ohm was being used to drop 9V down to 5V.  It is pretty small and I'd think might get pretty hot if it were used for that and the resistor doesn't show any signs of having had that happen.  6V DC wall warts weren't that uncommon back in the day either, and using a resistor to trim 6V to 5V would generate a lot less heat I'd think.

If you take a look at the bottom left of your picture, I do believe that there is a Voltage regulator like a 7805 (black heatsink attached?).

It's just an assumption because the picture doesn't show to much details.

So if you could do some pics of the bottom of the PCB as far as a pic of the black heatsink ? and it's regulator... could be of some help.

Update: as far as I can see... there isn't any power jack installed (as long as it's not the mysterious black box ?), just the serial and the parallel cable. If this black box is a power jack, then I do believe that you have to power the unit with +5V DC, because the shown ICs are all powered by 5V DC.

Datasheet of the shown AY3-1015 attached:

The black thing near the bottom is the 3.5mm jack used for an external PSU, if needed.  I know the circuit needs +5v, but I just didn't recall many 5v wall warts back in the early 80's.  Seemed like they were all 9v.  But they may have been other voltages as well.  It looks like they may have expected slightly more than 5v, as the positive connection on the jack goes through a 220 ohm resistor before connecting to the +5v rail.  The interface card is swappable on these Commodore printers, so i confirmed that pin 18 has continuity to the sole electrolytic cap on the interface card.  So it seems like this printer should be able to power the Kameleon converter without a PSU.

I can post the solder side of the Kameleon if anyone is really interested in it.  I'm going to go out on a limb and guess its a fairly generic conversion circuit, probably almost identical to other devices from the era.  The only other thing slightly unique about this converter is they also included a ProDOS disk with some utilities for printing graphics files.  You can invert them, zoom in on them, or just print a section of the full picture.  I don't think it actually requires the Kameleon interface though, so maybe the software would be of interest to others?  You do have to select the printer you are sing though, and it only lists a handful - Epson MX/FX, Gemini 10(x), Okidata 80/90, C. Itoh Prowriter, and Seikosha 550a/700A.

I did confirm though that it all works.  Hooked it up to my //c and one of my "new" Commodore 1250 printers set to parallel/Epson FX mode.  I broke into basic form the check disk screen after booting, did a PR#1 and the printer responded with a line feed.  typed in some garbage at the prompt and everything echoed through the printer.    Then I fired up Print Shop, set it up for an Epson FX printer and made a test sign.  I apologize for the blasphemy of using a Commodore printer with an Apple going on here.  If it makes anyone feel beter, its technically a Citizen 120D printer that Commodore rebadged. 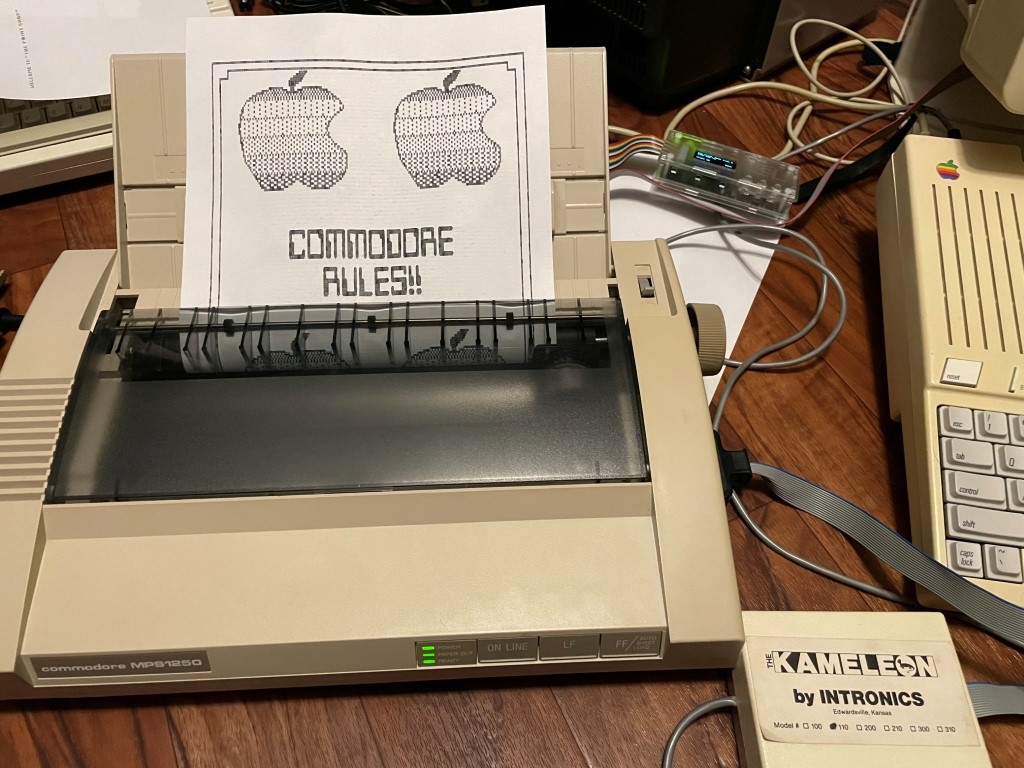 The print quality isn't as nice as my IW2.  And seems to be dragging some ink across each line.  The print head carrier probably needs to be cleaned.  I really bought this to work with my C64 though, so no big deal that its not up to the IW2 standards.

Great that it works.

Anyhow, if you are requestet to use a PSU, the 220 Ohm resistor will not be stressed by this.