Hello all you good people! I wanted to post this forum because I wanted to get the word out there that I am selling Fully Assembled Apple-1 Replica Boards for $666.66 + shipping. These boards are hand-assembled and burn-in tested by yours truly, you can contact me at (559)-704-0002 or send in an email to : logansreplicas@gmail.com! I look forward to hearing from you! P.S. My current payment method is only PayPal, I do ship within the USA and International, however just be prepared to pay a pretty penny if your international. Thanks! 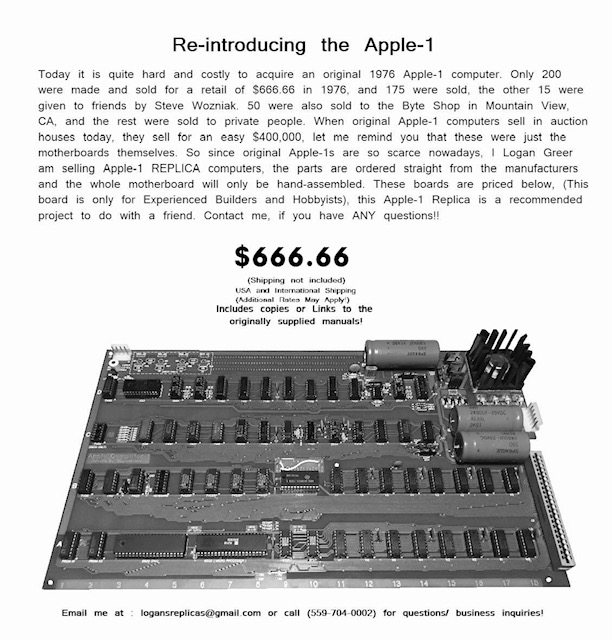 Hi Logan, Can you post a photo of an actual completed board?

Hello macnoyd, the photo in the ad is of my own completed board. If you still need more photos I'd be happy to oblige... 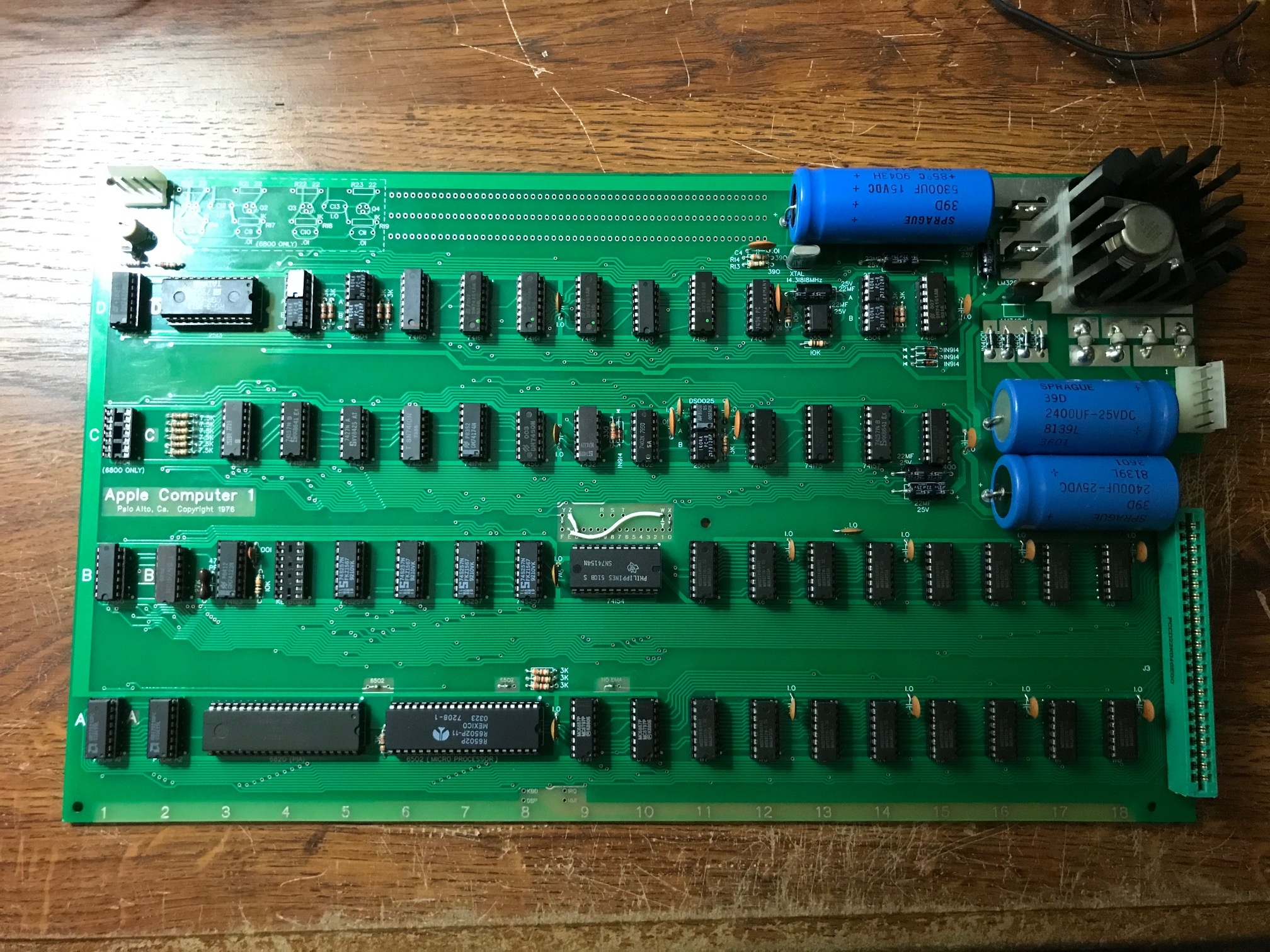 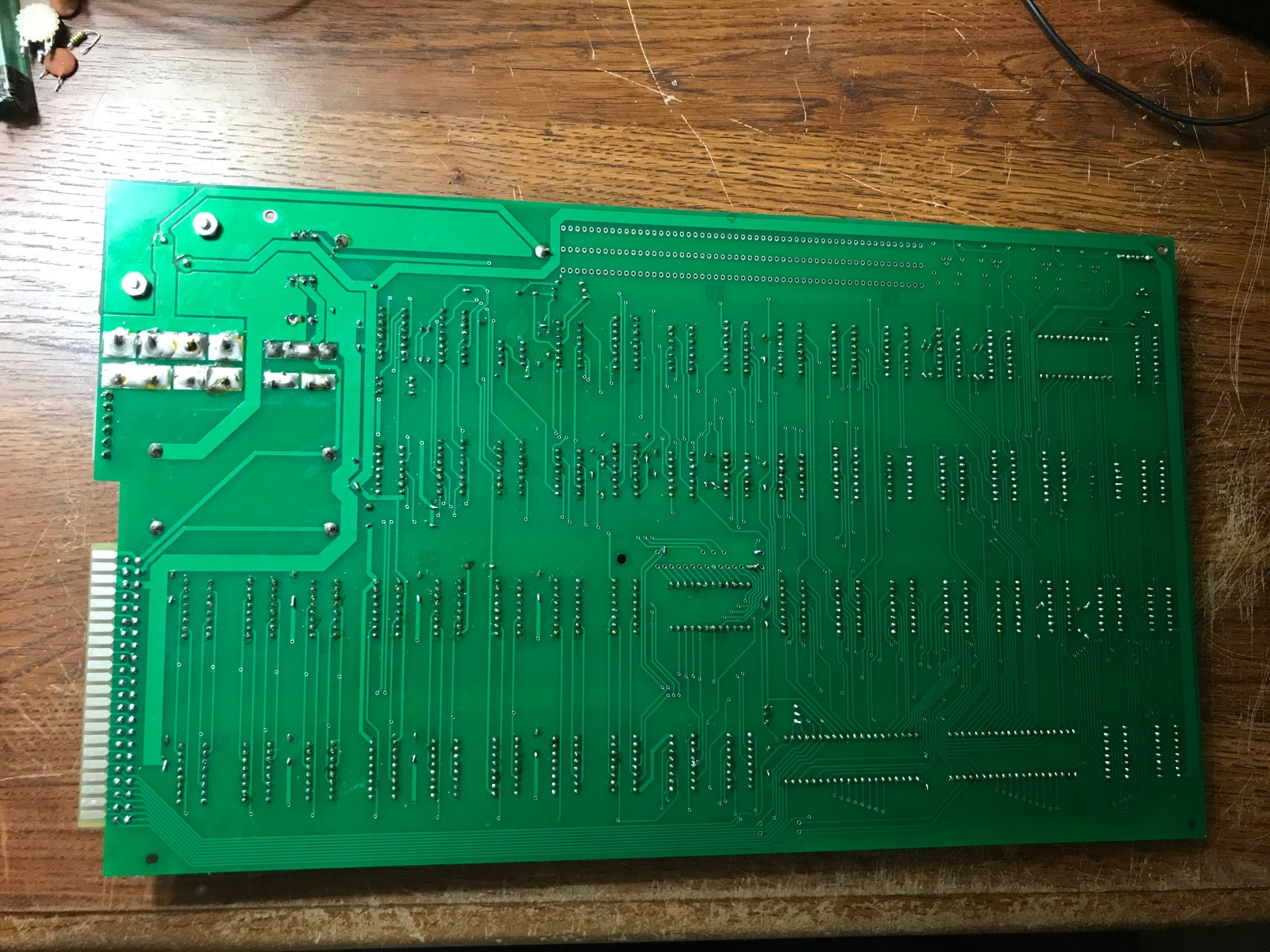 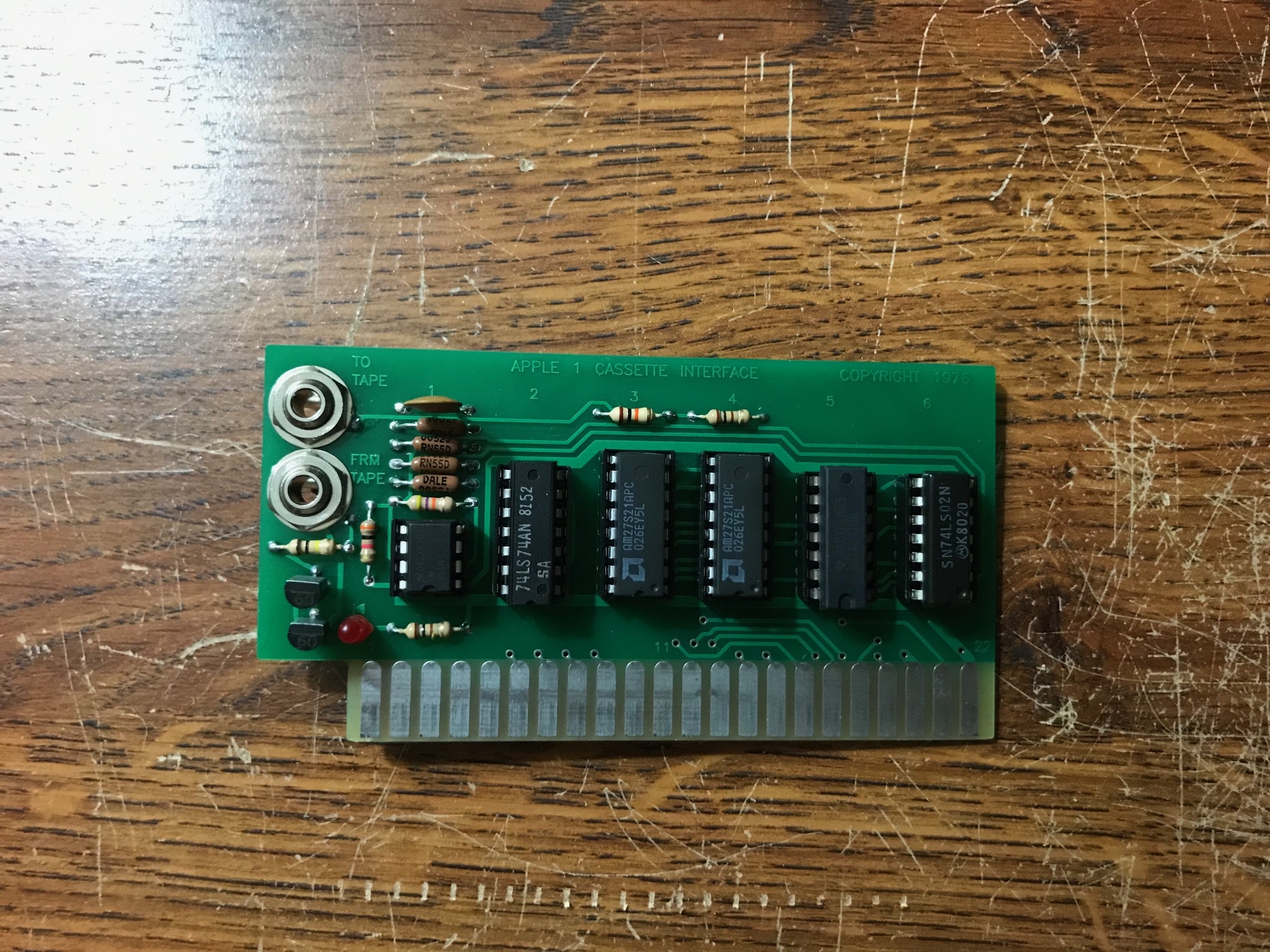 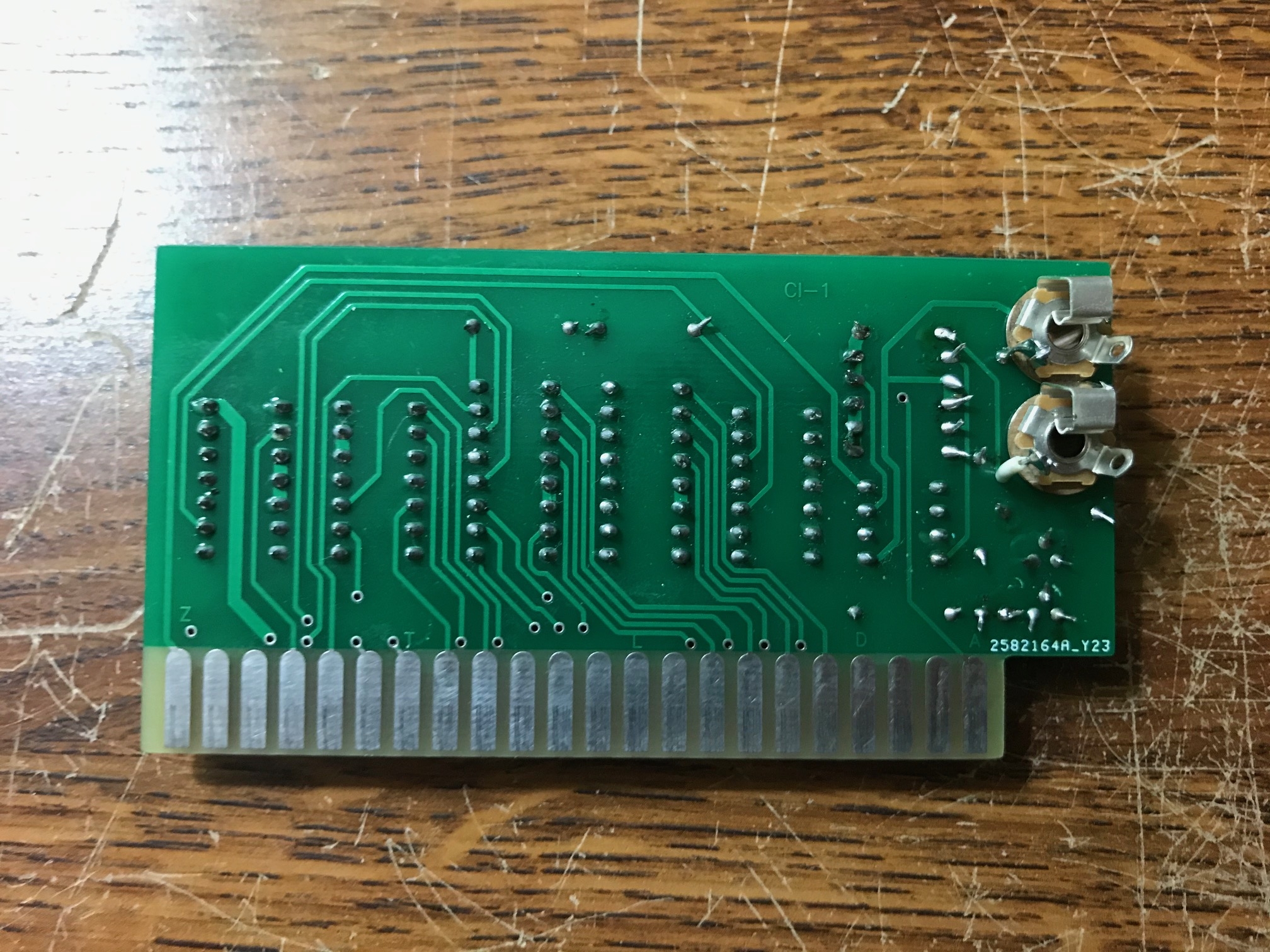 ... for the courage to engage in this business venture !

I had the same idea about a year ago and targeted much the same price, although it was $667.77 to take the number of the beast out. Not that I am superstitious,  but some very religious people may object, and this means losing some prospective customers. The irony is that all the product bar codes in the world, with no exception,  have the number "666" in them, although these sneaky bastards never show these numbers below the bar code, they only show all the other numbers. So indeed, nobody can "sell or buy" without "having the number of the beast" since many years.

Alas, my grand plan fell apart when my lab technician - who was supposed to build them to help him with his unemployment - choose instead to use his time to fix up his house, sell it, and move away. And frankly, although I can build an Apple-1 myself in about 5 hours, I'm too old to do that at my age. It's an enormous strain on my aged eyes and my back muscles.

So it is good you stepped in ! There are many, many Apple collectors out there who want an Apple-1 but can't solder.

And exactly therein lurk the problems you have not solved yet: a) the keyboard and, more important, b) the so-called PSU with the transformers. I was unable to find a way to build the latter legally in this country. Even if you use UL listed transformers according to the manufacturer spec with fuses on all the secondary windings, you still don't have a "legal" power supply you could sell to unsuspecting customers ready to be plugged into a 110Vac outlet. If you do, you may be not legal (I know this sucks, but this is the price you pay if you allow your nation to be governed by lawyers and the like, and in case you wondered why nowadays everything is "Made in China", you now have the answer, this is the inevitable consequence of all the stupid laws & product liability litigation).

I think a possible solution would be a relatively foolproof power supply kit based on a PCB that is designed in such a way that nobody could ever touch the "hot" side (if properly assembled), and only using UL approved components. I was working on such a PCB when my plan fell apart due to loss of my lab technician. Of course such a kit would still require some soldering, but you could pre-assemble all the critical parts such that finishing it is foolproof, but the liability still rests with the builder. Much the same concept as they use with kit aircraft (I mean the real ones people can fly with, not model aircraft kits).

Duly noted! Thanks I try!

The other thing that worries me is that you plan to hand assemble each one. While it looks like your soldering ability has GREATLY IMPROVED over some of your earlier posts, I still see what looks like poor solder connections. So I'm concerned about the reliablity of what you are selling for such a high price. And we all know that the Apple-1 was notorious for being on the edge of reliability even under the best circumstances. How do you test each board before shipping?

Once I've finished assembling the board, I run all the manual tests until they all test good, then I load into BASIC, VIA a real cassette player and I then run a BASIC program for 24 hours... While the photos may look deceiving, I can assure you that my soldering is higher than average! Otherwise it wouldn't work and I wouldn't allow myself to sell it...

I would not worry about UL or CSA approvals.   This is an old replica.  FCC approval for emissions was never a factor either!

Frankly, who cares about approvals?  This is a replica, something built from scratch that replicates the first commercially released Apple computer.

I commend the project and Logan's ambition.   For that price, let the user decide what power supply to use.

Don't worry about superstitious prices either.  That was the very point Steve Jobs was hitting on when he set the price to $666.66.

Didn't stop Jobs from selling them, did it? ... or stop folks for paying over a half a million $ USD for one either.

Keep up the good work Logan.

Logan, forget about the naysayers here you are doing something that many here could only dream of doing.  If you have a garage and can find someone like Steve Jobs you'll be on your way up! ;-)

Thanks! Let me remind you that I'm only 17, I started my journey way back when I was 14 with the Apple ll Rev.0 project, and I got critized the living crap out of for that... Everyone said I couldn't do it affordably, I'm an amateur kid, I couldn't find the parts, etc... Well, they where wrong, I'm so devoted and have my heart and soul in all these replicas that I make! Having that drive has never slowed me down, while I have had concerns, that was normal. Heh, looking back now... I remember the nights I'd be in my bedroom soldering on the floor making boards (Because that's all I had), I think I even live streamed it to the Apple ll Enthusists page, I also emailed Woz when I was 14 and he responded to me...! So many things in my life have drastically changed in 3 years, I have my own individual desk for my electronics work, I have great tools, and a loving and (partially) supporting community that tells me to go for it! I am thankful for the people that support me, it's nice to know that people have your back in projects that even YOU doubt sometimes... To all those people... Thanks. @K14, @macnoyd Thanks for that comment... made my day!

This is great! Keep up the good work mrtitanic!

I have my own board, but trying to get all original components takes lots of time. And it will be scary to power it up. The $800 white 6502 may not be my first choice as a test bed... ;-P

Getting a fully soldered and tested replica for $666 sounds like a good deal.

they really cost on ebay most cheapest i could find was 1000 dollar one. could you image. I could get ps5 for that prise. But your prise. ITS FREAKING AWSOME

they really cost on ebay most cheapest i could find was 1000 dollar one. could you image. I could get ps5 for that prise. But your prise. ITS FREAKING AWSOME

Well his post was from almost two years ago.  We've seen major inflation since that time so overthing costs more.  And the chips needed for an Apple-1 board just keep getting harder to find and more expensive.  So even a year ago I can't imagine Logan was making much money on these given the cost of all the componets and the amount of time needed to assemble and test them.  $1000 really doesn't seem unreasonable.

I'm actually pretty curious about how many of these Logan actually made and whether he sold them all and for how much.

Your absolutely right. Inflation has killed lot of my business, but I would say that somewhere in the ballpark of 10-15 I sold at $800 a board due to inflation. Remember that my boards are hand soldered and aren't wave soldered like Armins's boards. So his will cost more because he has to account for that cost.

I would love to sell more, but honestly with Armins business with his replicas, it just kind of stole by business, which I understand and don't hate on him, it just seems ovbious that that would happen because, why would a customer prefer a hand-soldered board over a professionaly wave soldered one...

Your absolutely right. Inflation has killed lot of my business, but I would say that somewhere in the ballpark of 10-15 I sold at $800 a board due to inflation. Remember that my boards are hand soldered and aren't wave soldered like Armins's boards. So his will cost more because he has to account for that cost.

I would love to sell more, bu

Actually wave soldering is normally done as a major labor saving method, which means that unless you're not paying yourself anything for your labor, a wave soldered board should be cheaper to produce.  But a lot of that depends on quantity, and 10-15 units over 2 years, even if Armin was selling 3x that much...  probably not really worth the setup costs to wave solder them...  So you could be right.  I'm guessing for wave soldering to be cost effective and save money you probably need at least a 50 board run or so.  Given the market for Apple-1 replicas that might take a while to sell.  I've heard Uncle Bernie's reasons for backing out of his original project to build fully assembled wave soldered boards.  It just doesn't seem like this is a workable business model.  A small side hustle at best.