I found this in one of my boxes of Apple II artifacts: 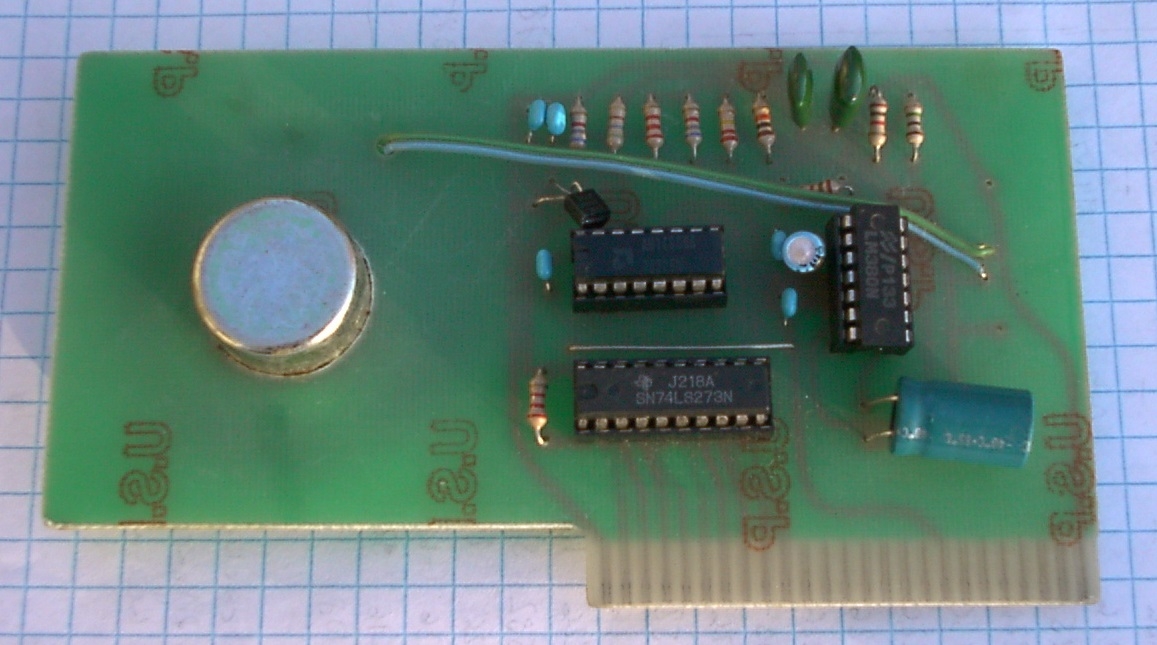 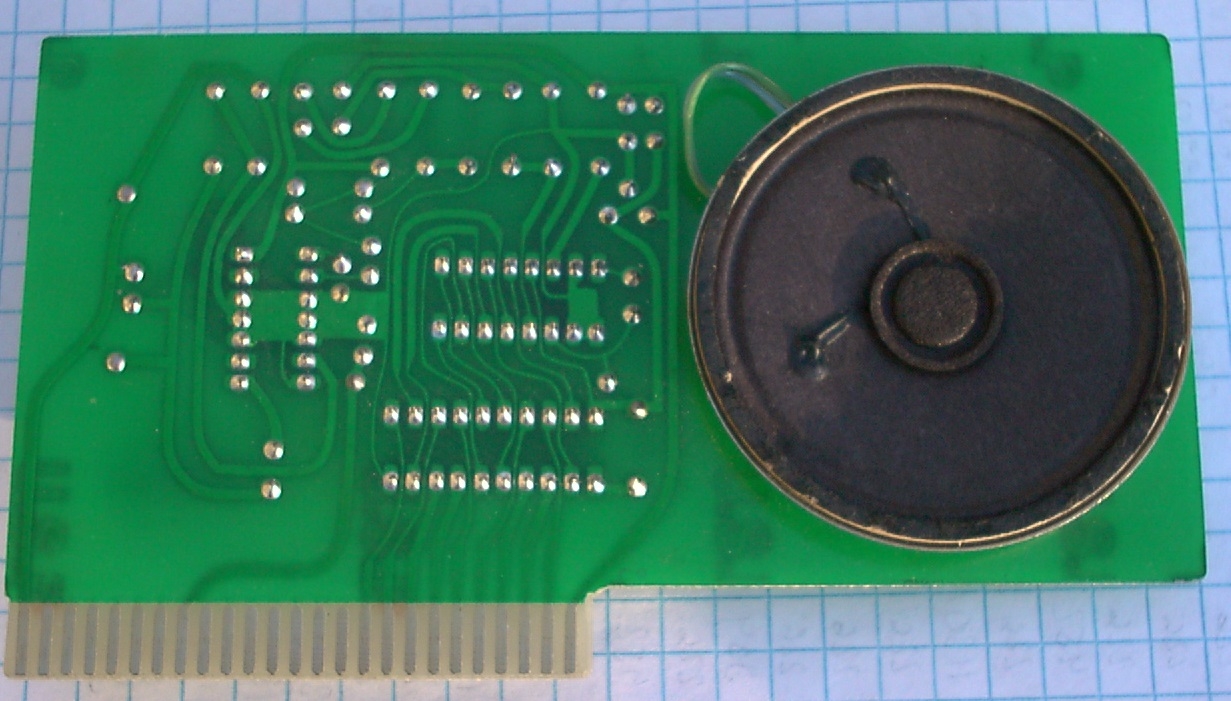 From the date codes on the ICs it was made in Y1979 or later.

It's not from a kit (it apparently was wave soldered) but the build quality is lousy and the edges of the PCB were not de-horned, so they sting (the glass fibers still there !).

There are no manufacturer markings or type / serial numbers of any kind in the PCB, as if the producer wanted to hide his name in shame (due to the lousy build quality ?)

Can anyone help to identify this card ?

My 1st thought as well, both by looks and by the fact that I know that card is cloned a lot. Heck, I own a clone of it myself. I would be both surprised and intrigued if it's not a SAM clone.

My 1st thought as well, both by looks and by the fact that I know that card is cloned a lot. Heck, I own a clone of it myself. I would be both surprised and intrigued if it's not a SAM clone.

Likewise.  Based on the chips that are on it, it certainly at least seems inspired by the SAM card.  Layout of the board is similar too, how the speaker is mounted, etc.

Thanks to those who answered my questions I was able to put the card into the right slot (#4) and I also was able to find the S.A.M. disk !

But despite the card has an 8-bit DAC the quality of the speech is disappointing. Not much better than the software-only S.A.M. sold by the same company for the Atari 8-bits, which had only 4 bit audio DACs.

Oh, and I also wrote a software emulator for that voice chip. There has been one around in MAME but it had bugs. Reading Mozer's patents helped to fixed that.

I wonder how popular S.A.M. for the Apple ][ really was. Maybe popular enough such that knockoff boards were produced by wave soldering ? How much effort and expense went into that ! Seems that the desire to make copycat products is stronger than reason and logic in some people.

In the case of the SAM cards, I wouldn't be surprised if the clones (as a whole) actually outsold the original cards.  I know over the years I've seen way more clones for sale than original cards.  There are a couple of sources for currently made cards in fact.  A2 Heaven sells one and David Mutimer also sells at least bare PCBs for making them.  As you can see it is a super simple card so it doesn't take much to build them.  The main limiting thing is the original style DAC chips aren't the easiest to find, but they can be had.  It ptobably wouldn't be too hard to build a software compatible device using a currently produced DAC chip.

My S.A.M. is hooked to an 8 OHM external Pioneer speaker, as recommended in the manual. The Speech, and original Apple II sound, comes through nice and loud. Sadly, A2Stream is very faint even with the SAM as an Amplifier, so I reconfigured that to output mono through the cassette tape output on my IIe.

I have a mystery sound card from a II+ which is based on the SC-01-A. That IC fetches stupid money, likely due to use in Q-Bert machines and such. Honestly though, the SAM card actually has "better" speech in the limited time I've spent with both cards. The Mystery SC-01-A Card sits in an anti-static bag for now.

I remember running SAM software on my stock Apple //c.  It worked fine.  So I was weirded out when I first heard about the SAM hardware.  Why have that when there was a software equivalent?  Saving processor time for other functions while the card handles the talking?  Also, I've not looked real hard, but I've also never seen it posted elsewhere.  Is it on Asimov?

That card is just a DAC and an amplifier.   It really doesn't free up much processing from the CPU compared to the clicker speaker.  The sound quality is a little better, but because it is basically the same software, really not as much as maybe it could have been.  The hardware is capable of doing 2 or 4 voice music with a lot more control of sound.  With the right software it could probably do a lot more convincing organ, woodwind, etc. sounds.  If it had programmable filtering like for example the MMI (Micro Composer) cards, it could do even more.

"The Mystery SC-01-A Card sits in an anti-static bag for now."

Oh, your mention of the dreaded SC-01 brought back some fond memories.

When the SC-01 came out, I scratched together the money and bought one at an usurious price (even back then it wassomething like $60 each, IIRC) and built a small board with it. I even coded some text-to-speech software which was based on a paper from the Office of Naval Research (IIRC). The outcome was disappointing. OK, the "speech" could be understood with some effort, and the SC-01 did not have the quantisation noise like my earlier attempts with delta modulation, but for all the work and money that went into it, the pityful results were not satisfactory.

Back in the 1970s there were numerous contenders in the field of speech synthesis:

Votrax with their voice tract model based synthesizers. The SC-01 was the single chip implementation of that technology. In the early BYTE magazines you can find implementations based on discrete components hidden in large modules made from potting compound. To "hide" their "secret" circuits from sight. Oh my ... the same chemical corporations who made these two component potting compounds also made solvents to break the bonds and to dissolve them. Very nasty, toxic stuff. There was one type for removing Epoxy based potting compounds, and another to remove Polyurethane based potting compounds. They worked like a charm !

Texas Instruments with their LPC technology ("Linear Predictive Coding"). Used in their Speak&Spell toys. They also had a speaking four function calculator.

National Semiconductors "Digitalker". I don't know which technology they used, but from the quality it could be Mozer's. There were talking digital clocks based on a Digitalker chip. Annoying little bastards which quickly ended in a landfill after the novelty effect wore off - much as with the ridicolous "two hand" LED wristwatches of the early 1970s you had to press a button to make them talk.

Telesensory TSI-14001 speech synthesizer. Based on Forrest Mozer's speech compression / synthesis patents. Good male voice quality at a low data rate such as ~2 kbit/s. Originally used in a 4 function calculator for the blind - the keys have Braille encoding. I have one of those (no, I'm not blind, but I love to collect 1970's speech synthesis artifacts). Also used in most talking "Chess Challenger" computers from Fidelity. Late Fidelity chess computers used a software implementation. At that time EPROM had gotten so cheap that it was feasable to use a much less efficient speech compression method and ditch the elusive TSI speech chip.

Forrest Mozer's technology was the best, IMHO. They had naturally sounding speech at a very low data rate. Here is a youtube video with an interview of Forrest Mozer:

They had a phone number where you could listen to a female voice at IIRC 8 kb/sec data rate and you could even recognize the (sexy) personality of that female, it was sounding so natural and without any discernible encoding artifacts / quantization noise.

Which are very present and annoying in the S.A.M. speech synthesizer. I've heard the opinion that it was based on Mozer's technology but if so, how come that the speech quality is so poor compared to the TSI-14001 ? Maybe at some time in the future I will do a disassembly run on S.A.M. to find out if it's Mozer encoding or not. Maybe they did not pay Forrest with his basement sound lab to encode their recorded material and tried to do it themselves. I think there must be some tricks involved which are not disclosed in the patents. I tried Mozer speech encoding myself and despite I fully understand the  mathematical concepts, and his patents, I never got the speech quality of the TSI-14001. Maybe he hand tweaked the small "kernel" snippets which make up the voiced phonemes for best voice synthesis quality. Who knows.

All this speech synthesis technology is lost in time. We now can throw megabytes of memory after problems which the true wizards of the 1970s had to solve with just a few kilobytes.

All this speech synthesis technology is lost in time.

Not quite. Someone claims he adapted the original SAM speech synthesizer (using the C64 version) and created it as a C program - requiring just 39KB on a modern machine. He also has a JavaScript version. You can try it on his website:

There are cards which use the TI chips which do a pretty decent job.  The Echo ][ from Street Electronics is the most commonly encountered.  However I recently found this card in a //e I acquired...  It was marketed with software into the education market (not surprising on the Apple II).  The Echo ][ I think programming information is available.  This other card will probably have to be reverse engineered out of the software available on Asimov that works with it.  Once figured out how to talk to the TI chip then the normal TI programming or Echo ][ programming will probably fill in the gaps. 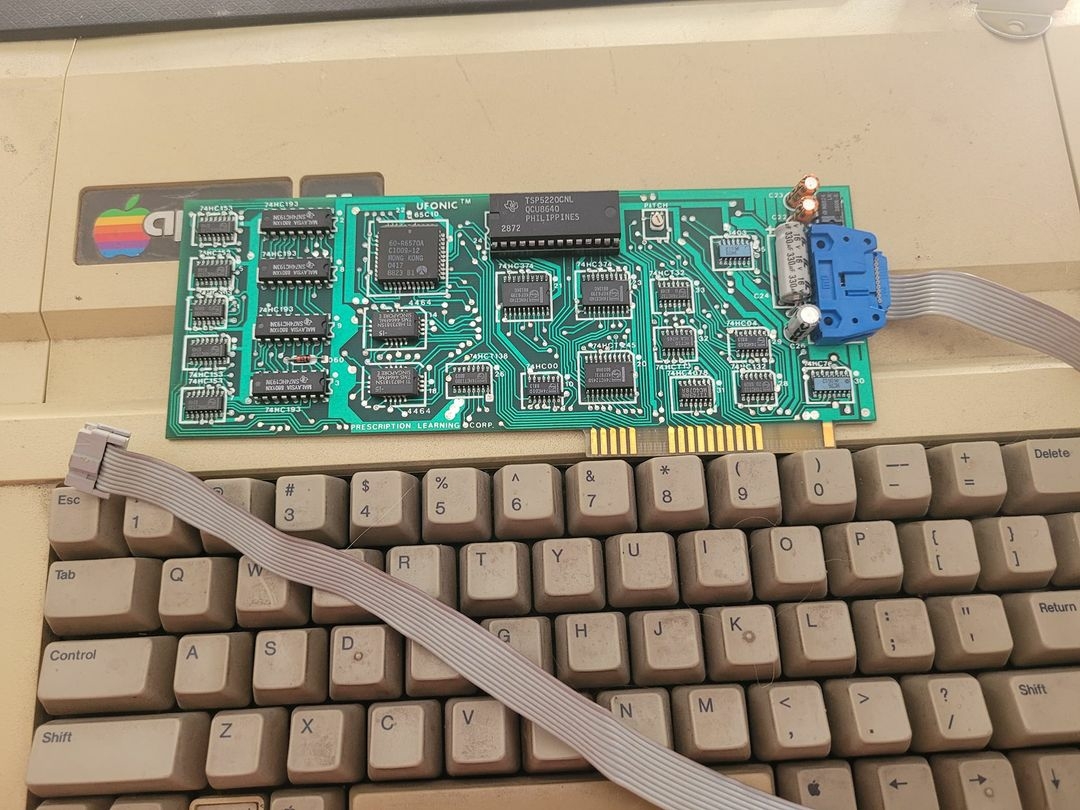 These cards came with an amplified speaker box with volume and tone controls which I didn't get.  Someone on one of the FB Apple II groups gave me the info on how to build a cable adapter to plug it into a normal amplifier. 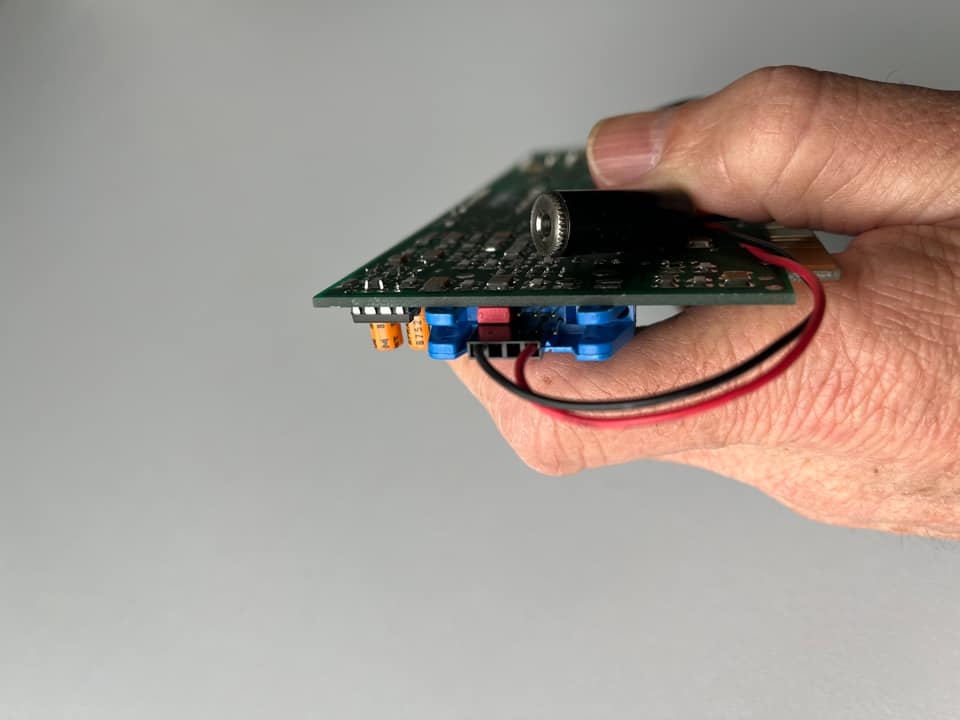 There are disk images that will work with the card on Asimov in the images/education directory.  Search for UFONIC and Prescription Learning Systems.

I only dimly recall this early era of speech synthesis, although I did have a go at trying to use a Speak'n'Spell as a small child. I couldn't make heads or tails of it, it just sounded like noise to me.

What I recall with more familiarity is the 1980s era of speech synthesis including the original Macintalk and the speech synthesis on the Amiga which I don't know the name of. At the USGS Menlo Park office there was an Amiga kiosk with a quite intelligible voice that described tectonic fault lines in the Bay Area.

With regard to removing potting compounds, tetrahydrofuran (THF) is a common agent formerly sold by PACE for that purpose. It is indeed toxic stuff and should be treated with respect.