Is the HSYNC on an Apple I intentionally 10 us wide ???

REQUEST FOR HSYNC TIMING MEASUREMENTS ON APPLE I (or clones)

I am wondering about a few weird results from video signal measurements on my Apple I clone.

My period correct Shibaden VM-903U B&W monitor can digest it, but my small, 1990s vintage Mini-TV (single chip video section inside) can't take it and can't sync to that signal.

(So far the superiority of "modern" electronics !)

On the Shibaden, with 7" screen width (not diagonal !) the characters start about 1  1/4 inch from the left screen corner and the 40 chars juuuuust fit on the screen.

Some of that may be due to the enormous age of that monitor, but the 10 us HSYNC look wrong to me.

Is this wide HSYNC "normal" for the APPLE I ?

Otherwise, I need to go hunting for a bad IC somewhere.

It looks like you don't have a bad IC.  I was finaly able to check and it looks like the 10 uS pulse is "normal" since that's what mine has. Well, technically a 9.7 uS pulse but who's counting.

That got me thinking of a circuit that can regenerate the Hsync pulse and insert it back in the signal, but I still need to build that and try it out.

After a couple of false starts, I got the video working on the pickiest composite monitor I have.  It needs a bunch of tweaks, a lot less Franken-monitor, and a dose of miniturization, but it's a start. 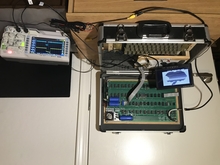 Thanks PROMetheus for this information !

Saves me a lot of time trying to find a "bad" IC that is not there !

I was pondering over a few circuits (R,C,D type) to add serrations during the VSYNC but did not get around to try them, I have only one Apple I build yet and it is 24/7 busy running IC tests now for several months, but soon I'm through with testing all my "rare" ICs (the shift registers and DRAM, did not bother to test any TTL yet, there a plenty around).

It would be great to have a fix for the video that does not need mods to the main PCB. So far I am stuck with 3+ B&W monitors which refuse to work with the Apple I. I have bought another Shibaden monitor off Ebay (the type that is known to work with the Apple I) but despite it turned on at the vendor was DOA, some hairline cracks developed during transport. Nasty ! Those japanese PCB materials from the 1960s were junk ! I have repaired it back to power on again and produce a picture but so far no hsync, seems the signal path still is broken somewere, but I'll find and fix it. In the meanwhile all the modern, known-working B&W monitors are sitting idle because they, being "modern", refuse to work with the Apple I.