I have an issue on an Apple IIgs RGB monitor (A2M6014), which I recently got.

The problem is: it works well at initial power on, but after some time, the screen starts flickering and collapsing vertically, and then eventually it collapses to a horizontal band (or even to a line). The 10-second video below shows the symptom.

I found some information from the forum, although I don't have expertise at all --- I've found the schematics of the monitor, and I learned that it might be a "vertical deflection" problem, which could be caused by cold solder joints on the "HV module (flyback)". So I resoldered all the pins of the HV module (luckily I knew how to solder), but it didn't fix the problem.

What should be the next step to repair it? Any comments will be greatly appreciated!

Since I don't have the schematic I can't tell you much. But this is no horizontal deflection problem, it is a vertical deflection problem, and since it works - you said - after power up when the monitor is cold it's quite possible some thermal protection circuit in some IC kicks in and turns the vertical deflection off. You need to find, in the schematic, the power suppy regulator for the vertical deflection and then measure if this power supply collapses or not. If yes, seek in the power supply, if not, seek the vertical driver IC. Cold spray can also help greatly with finding the culprit. Most vertical deflection ICs with integrated output driver stage have built-in thermal self protection so if they get too hot, they turn the output stage off. A squirt of cold spray on that IC can tell you that. Also, a gentle slap with the bare hand to the monitor's enclosure might tell you if it's a intermittent contact somewhere or a hairline crack in a PCB trace which opens when the PCB gets hotter. Troubleshooting crumbling electronics is a bitch, I know. And never finger around in the monitor when it's plugged into the line voltage. The CRT also keeps a nice shocking charge (and some capacitors, too) for a long time after power is turned off. Unless you are trained and equipped to work on such dangerous things, you better let it be. There is a reason why electronics industry wide safety standards prohibit a sole person from working in the lab. There always must be at least two, so the one left after the electrical shock can hit one of the the red shutdown buttons which are everywhere.

Is it worth to get killed by an old monitor - you decide!

Thank you very much for your comments, UncleBernie. Especially about the dangers. To me learning electronics is a lot of fun, and I've been enjoying designing and building things like 8-bit computers and various microcontroller circuits. But didn't have any experience with CRT and high voltage. So, although I learned how to discharge the tube and I used working gloves with latex coating, I will keep your warning in my mind!

Attached is a schematic diagram of my monitor (Apple A2M6014). My guess is that IC401 LA7824 is used as a vertical driver (datasheet), while IC501 LA7822 is for horizontal. I guess I need to find out which parts in the schematics are closely related to vertical deflection (eg "power suppy regulator for the vertical deflection") and could be the reason of the problem. Some further comments please?

I wanted to figure out which part is problematic, so I started by looking at signals of the pins of  the vertical driver LA7824 (IC401), using an oscilloscope. LA7824 datasheet shows the following pinout: 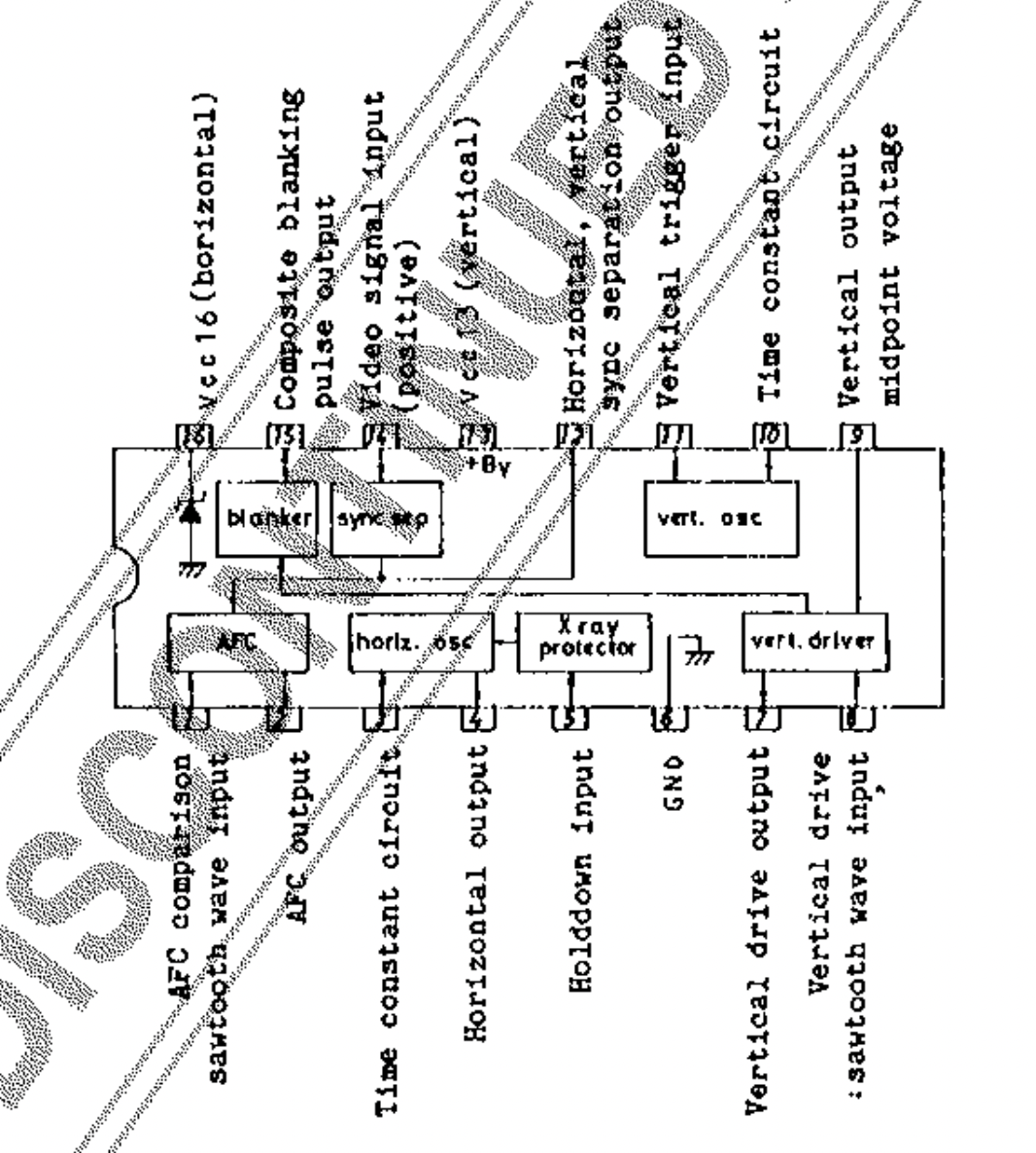 I don't understand how CRT and this IC work, but pin 7 looks like the main output signal used for "vertical deflection", so I cheked it first. When the CRT display works well, the signal was as follows. The frequency was 59.94Hz, and the min/max values were about 0.15V/-0.9V. 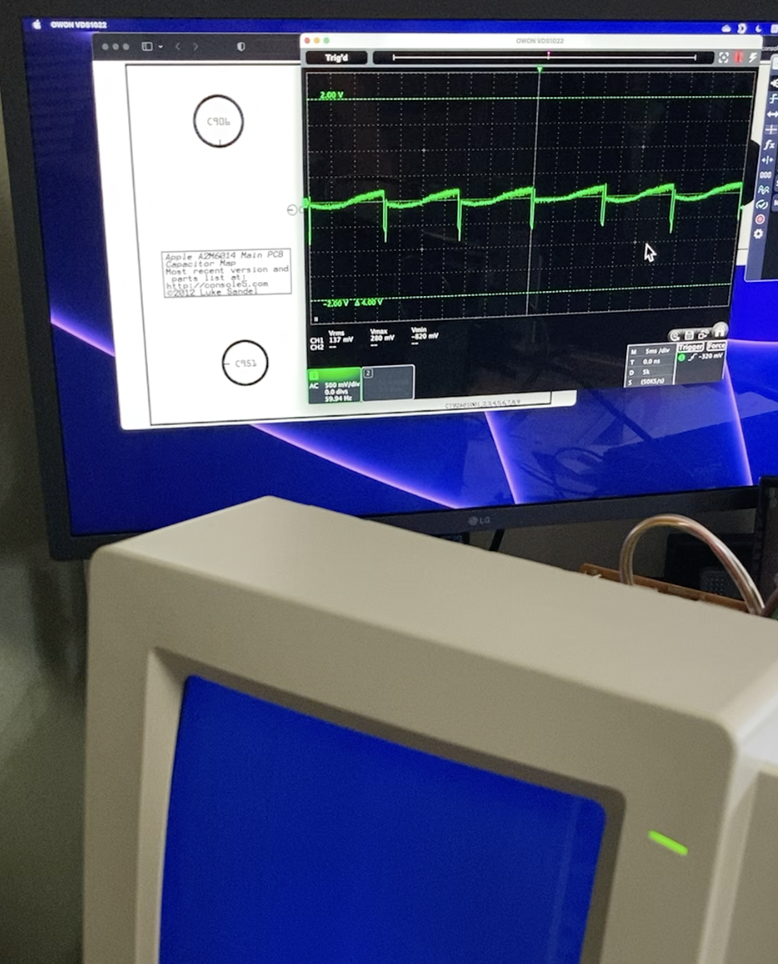 When the screen started flickering/collapsing, the signal reflected exactly the issue, as follows: 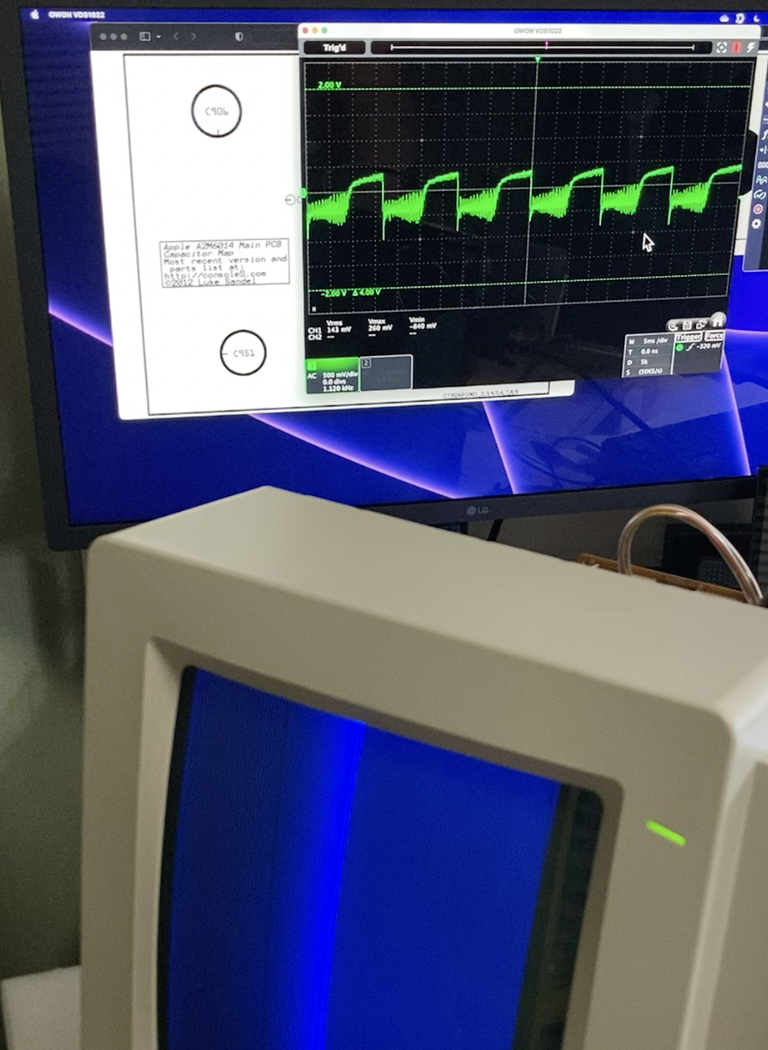 The following is when the screen was completely collapsed. The signal looks very bad, I guess. 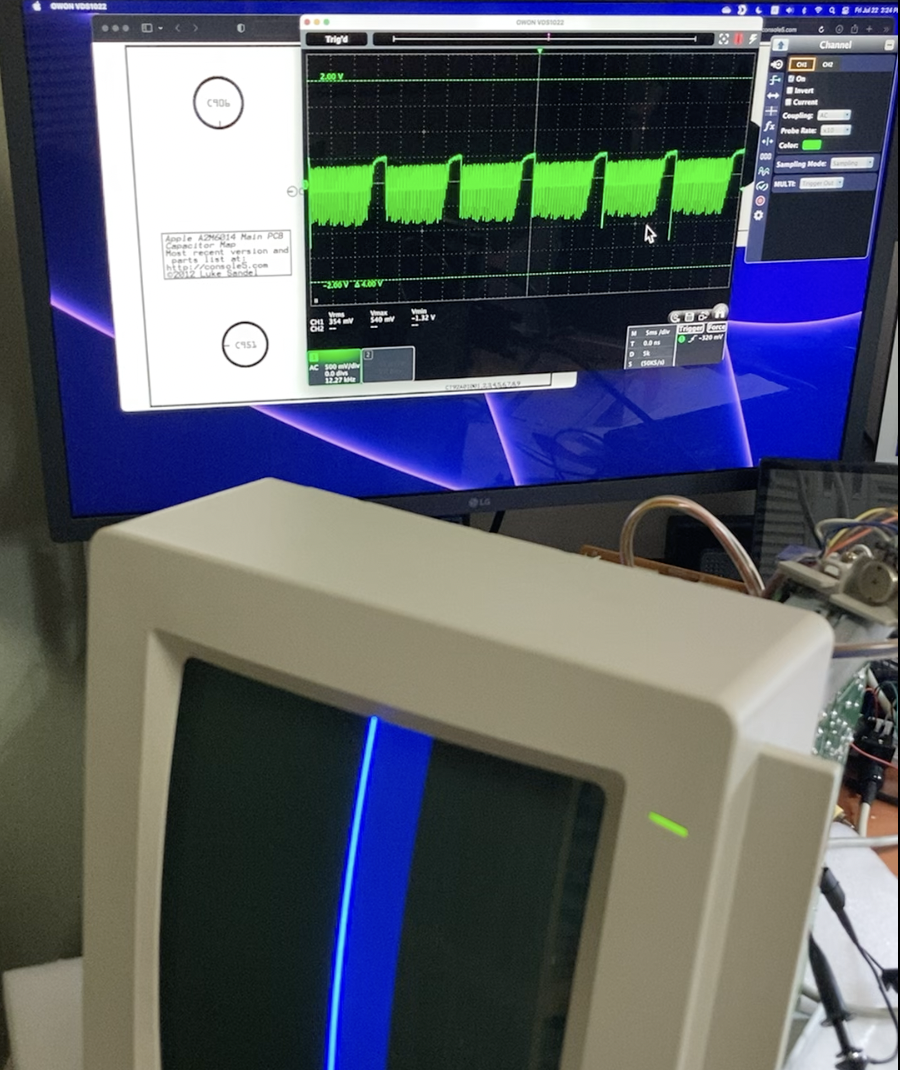 I think this is exactly the problem to fix.

So I need to figure out exactly which part is bad.  The IC LA7824 itself might be bad, or some input signals to LA7824 might be bad. Thus I also investigated other signals of LA7824 (when the screen is completely collapsed.) These are as follows. Click them for larger images. Pin numbers are shown in the photos. 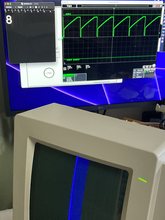 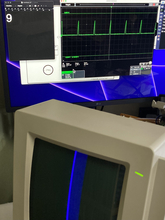 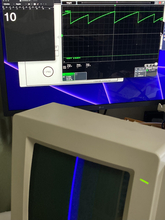 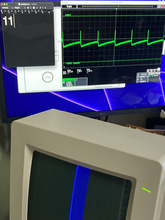 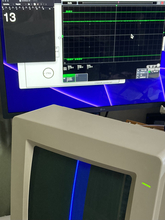 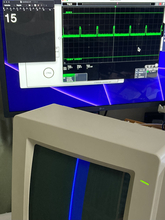 Because my lack of understanding, it's pretty difficult for me to figure out exactly what causes the problem (right?) of main output signal on pin 7, and whether other signals shown above are fine. (If it is the case, the problem should be LA7824, or something connected to its pin 7, I think.)

So please let me know if anybody have any thoughts! Many thanks in advance.

... and not a thermal protection circuit kicking in.

Unless it's a hairline crack or some other intermittent contact, the main suspects are big electrolytic capacitors in the vertical deflection coil drive path, whose ESR may have gotten too large due to age. Alas, keeping the vertical amplifier stable and preventing oscillations is tricky business and involves a lot of parts which could have failed, too.

Looking at the schematic, the vertical driver stage is discrete, Q401 and Q402, and it's powered by a winding on the flyback transformer, T503, acting as a sort of switchmode power supply in this case. This is a scheme you can find quite often, the resonant power in the horizontal deflection of large CRTs is about 500W to 1kW, so it can be drained after the mains has been turned off, to power the deflection system until all the stored energy is dissipated and the beam ceases. This shuts down the system in a controlled way even if the line cord is pulled or there is a sudden blackout.  Otherwise the stored energy will find a way out, destroying components in its path. And a hole would be burned into the screen.

Note the J17 jumper. This would allow you to disconnect the vertical deflection system from the flyback transformer and you could power the vertical deflection system from a suitable laboratory power supply after that jumper is disconnected, so as to split the possible areas of the failed components in half. You could measure what happens on that J17 node before and during the symptom manifesting. BTW, this also is the missing link why they pointed you to the horizontal stage as being the possible culprit ... it fit does not make the supply voltage for the vertical stage, it won't work.

As far as I am concerned I am a lazy guy so to would just systematically apply cold spray to the components in and around the vertical driver stage while the symptom starts to manifest, and note which component reacts. Use the real, expensive, ozone layer killing, planet depopulating, terrible, banned CFC based cold spray and not the "green" one which may be flammable and make explosive vapors. But do not use more than one can to avoid killing the whole planet instantly. (Just joking, I'm only snarky about the perils these "green" idiots have brought over us, just read the instructions and warnings on your can of cold spray before you buy, if it's flammable or not). The same "green" idiots have brought the new R1234yf  refrigerant over us, good luck with that if you have a fire in the engine compartment in your car ... the fumes are extremely toxic and a hazard for bystanders and the firemen. You need a hazmat suit with autonomous respirator to safely get near that. Idiocracy. The same kind of people who poisoned kids by mandating neurotoxic flame retardants on kids bedding, kids pyjamas, and stuffed animals. And then wonder about autism and ADHD and reduced IQ in kids. All thanks to the "progressive" legislators in the People's Republic of California. Poisioning kids sure is "progress" towards a "greener" planet. But enough of that.

I was able to find some time to investigate the problem further. Finally I figured out what was problematic --- Q401, an amplifier transitor in the vertical driver circuit. The original part was 2SC2168, but I used 2SC4883 instead, because 2SC2168 was no longer available. I made this choice by reading datasheets of transistors listed available from local online shop. I didn't have expertises and had only minimal basic understanding of how BJT and the verticial driver circuit work, so I was not sure whether it would work. Perhas luckly, 2SC4883 worked perfectly. Problem solved completely!

I appreciate comments of Uncle Bernie very much. It was very helpful for me to trance and figure out the problem. Thanks!

Hello, I'm also troubleshooting a verticle foldover issue on a Macintosh 12" RGB Display.  Thanks for your comments and documents, very helpful because I've been unable to locate a schematic, however these monitors (M1299 / M1296) use the same LA7824 deflection IC, and I also see Q401 / Q402 on the board, so it could be they match up or be very close component-wise.  I found quite a few videos and articles about recapping these series of monitors, but nothing linking it to the IIGS display until I started googling on the LA7824 IC.  This is also the first content I found with oscilliscope traces, so thanks for that as well, i'm going to fire mine up and compare.  I'll post back and let you know. 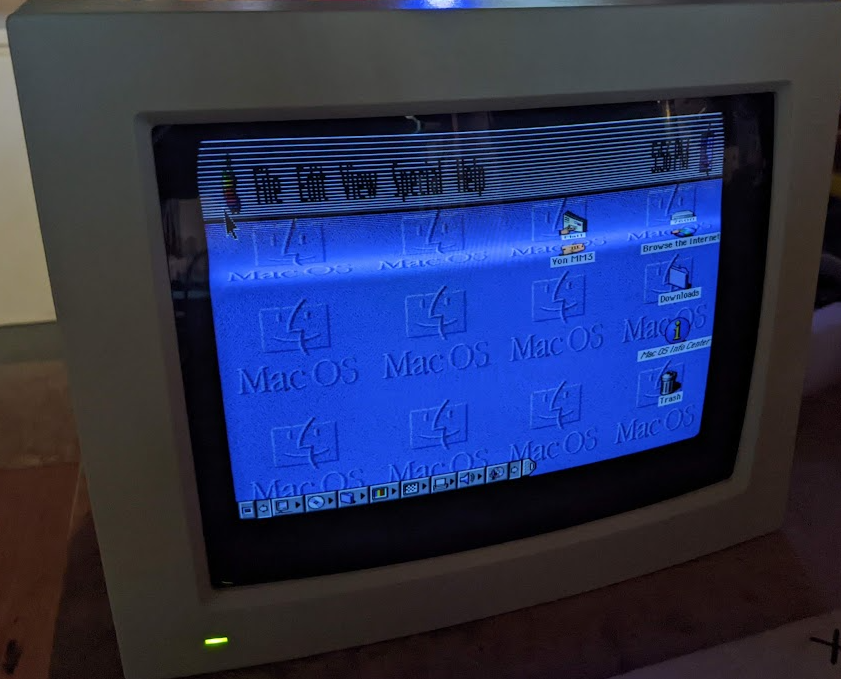