after being a „silent reader“ here for a while, I would also like to present my „first results“…

Last year I came across an Apple-1 clone PCB, more or less by accident, and after a few clicks on the internet I was surprised to find out that there is quite a community around this topic. I hadn't dealt with this topic at all, except maybe for one or the other restoration project a couple of years ago, on my Atari2600, the Commodore64, or my ZX81.

After reading along on a few forums here and there, it quickly became clear to me that I would also like to build a fully functioning Apple-1 board. My preference was to get electronically as close as possible to the original, but with maximum operational stability. I definitely didn't want to use any substitutions like daughter PCBs with PLDs or something, for all the hard-to-get components. However, I did use modern versions of the passive components, such as metal film resistors, or IC socket with built-in capacitors, etc.

I know there are much more authentic clones around here, pretty close to the original, with all the Allen-Bradley resistors, BEL disc capacitors, TI sockets, or ICs with the appropriate date codes. Unfortunately I couldn't make it quite as "original" as these clones, my board isn't a "Mimeo" either, just an ordinary JLCPCB, built from those public gerbers. But, I'm pretty happy with that.

Right at the beginning of my search for parts I was able to get a set of authentic bipolar PROMs (MMI 6301) for both, the WOZMON as well as for the ACI. And I didn't have to program them either, although I do have a Data I/O 2900. Over a few weeks I then collected ICs from various sources according to Mike Willegal's well-known BOM. Some from Belgium, Poland, Bulgaria, China, the USA and of course also from Germany.

Of course, I also had painful experiences with lots of fake chips from the Far East, but there were also pleasant ones, such as the working Char-ROM or the DS0025. Luckily I was able to order all the shift registers and some other hard to find rarities from Unicorn.

And so I finally managed to collect all the components together, to start populating the PCB. It was only at the end of my search, that I found out that there is an Uncle Bernie, who is available to help newbies like me in words and deeds (...and maybe components). But his numerous tips and hints, as well as those of the many other experienced members of this forum, ultimately helped me to ensure that my board ran error-free, including the ACI, right from the start after completion. Thank you so much for that!

I did make a few compromises on the peripherals. So I cheated a bit with the transformers and used two toroidal transformers suitable for our 230V mains voltage. Luckily I was able to bid on an Apple II plus keyboard and convert it accordingly, which at least looks halfway suitable. A real "Datanetics" from this period is unfortunately beyond my budget.

For an appropriate case, I initially thought of a replica of the well-known ByteShop case, but I wanted to leave the transformers outside. At the same time, I thought it's good that you can see the board, and so it turned out to be something completely different. I had also never worked with Plexiglas before, but after a few attempts to saw, file and sand the material, I was quite happy with the results. Of course there were also a few burn blisters on the fingers from all the polishing.

A small break in style is the (tiny) fan near the heat sink and I know that many people reject that. But it is actually hardly noticeable and I just want the voltage regulators to feel reasonably comfortable. And yes, a suitable monitor is also needed. But prices are skyrocketing at the moment. The cassette recorder for loading the software is currently being repaired, so an old iphone will have to do the trick for the moment. 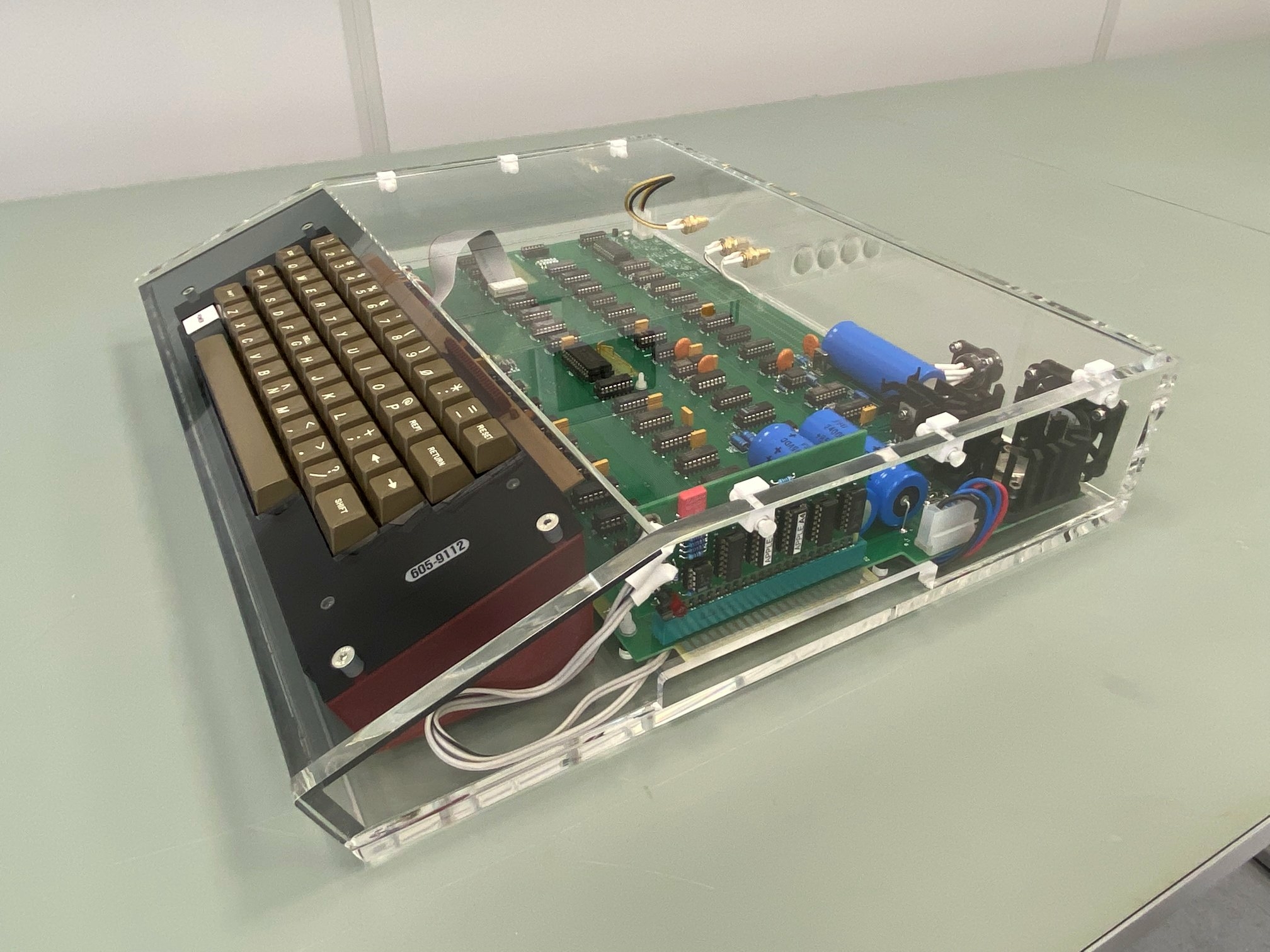 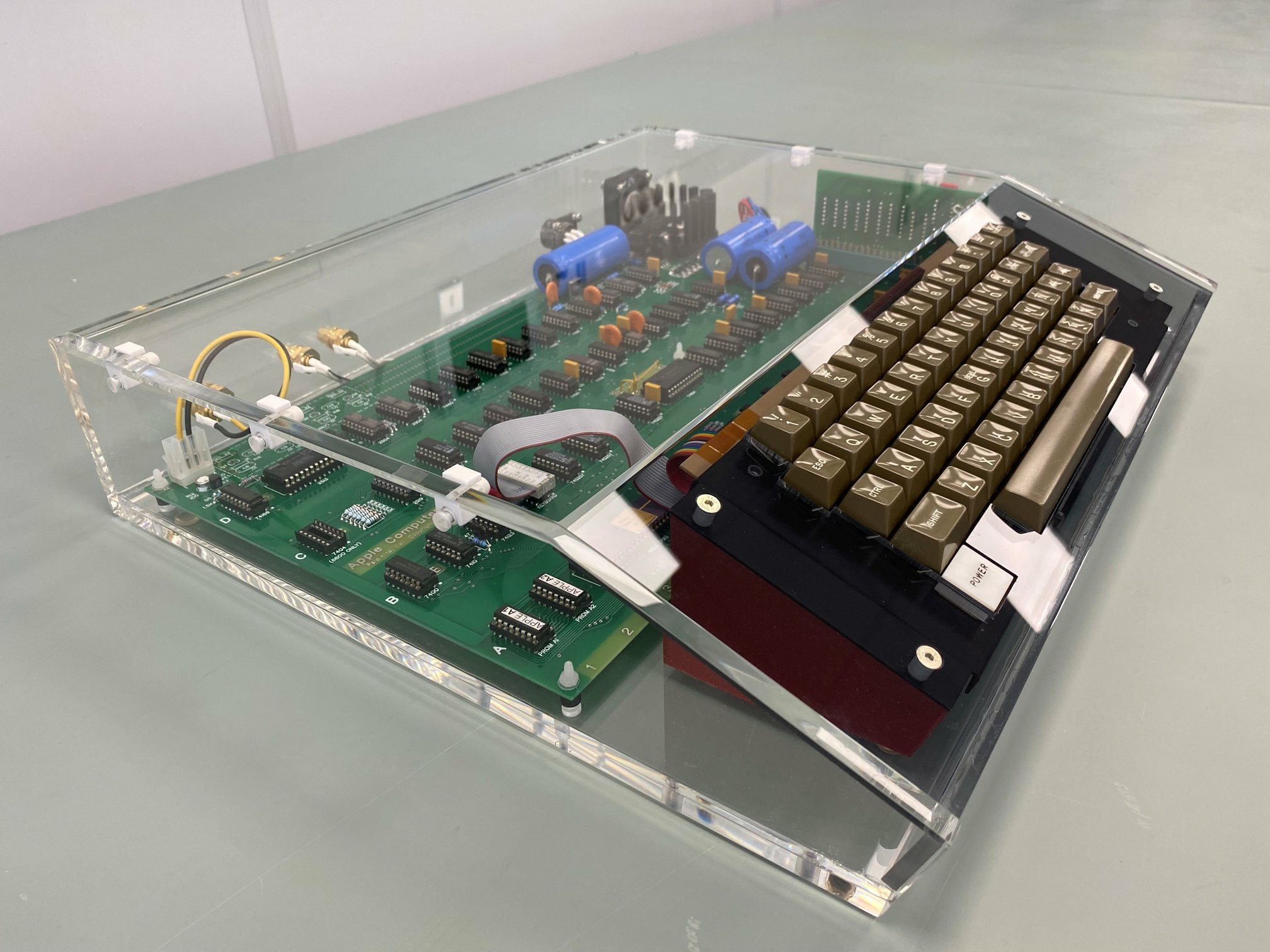 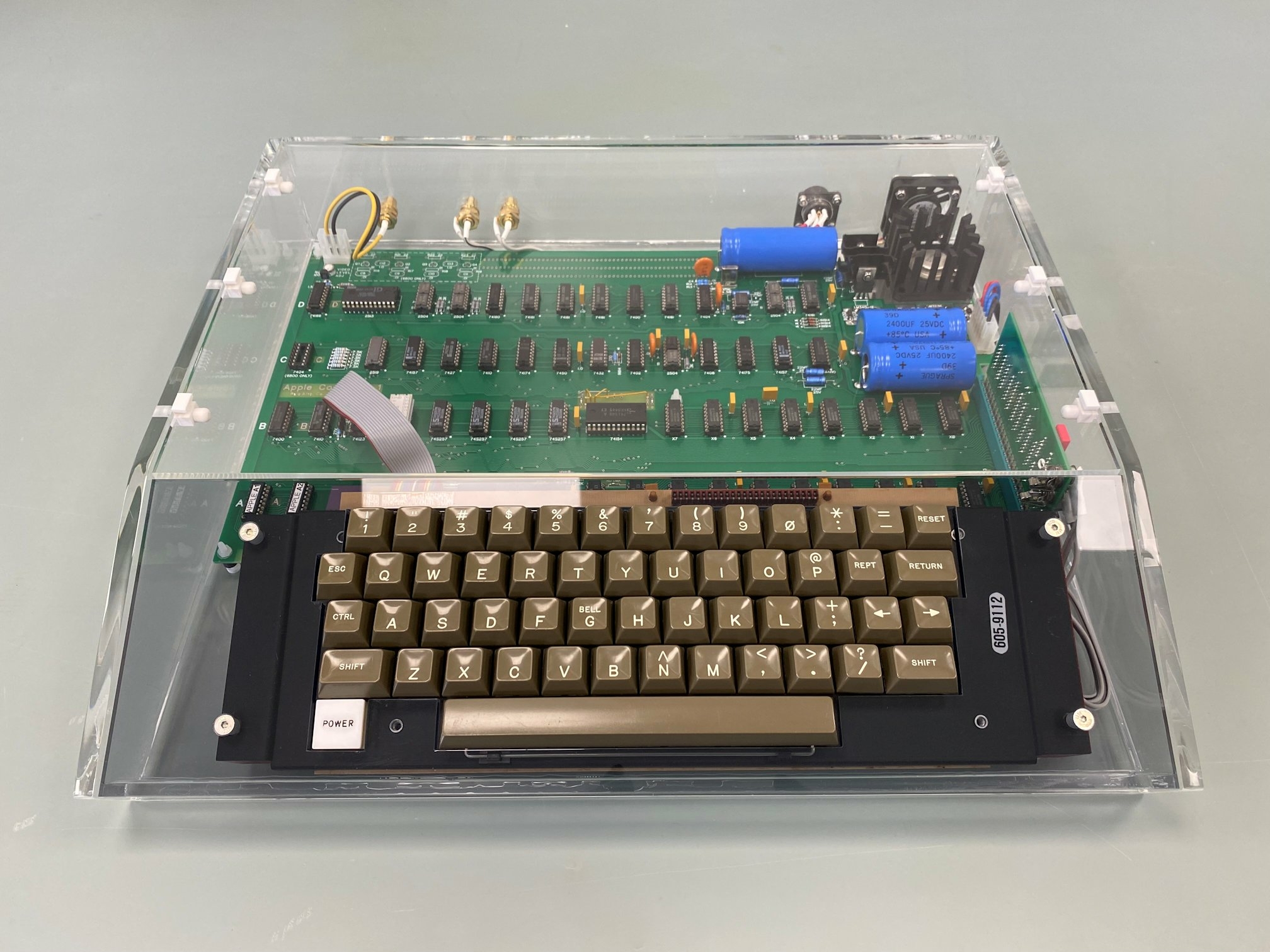 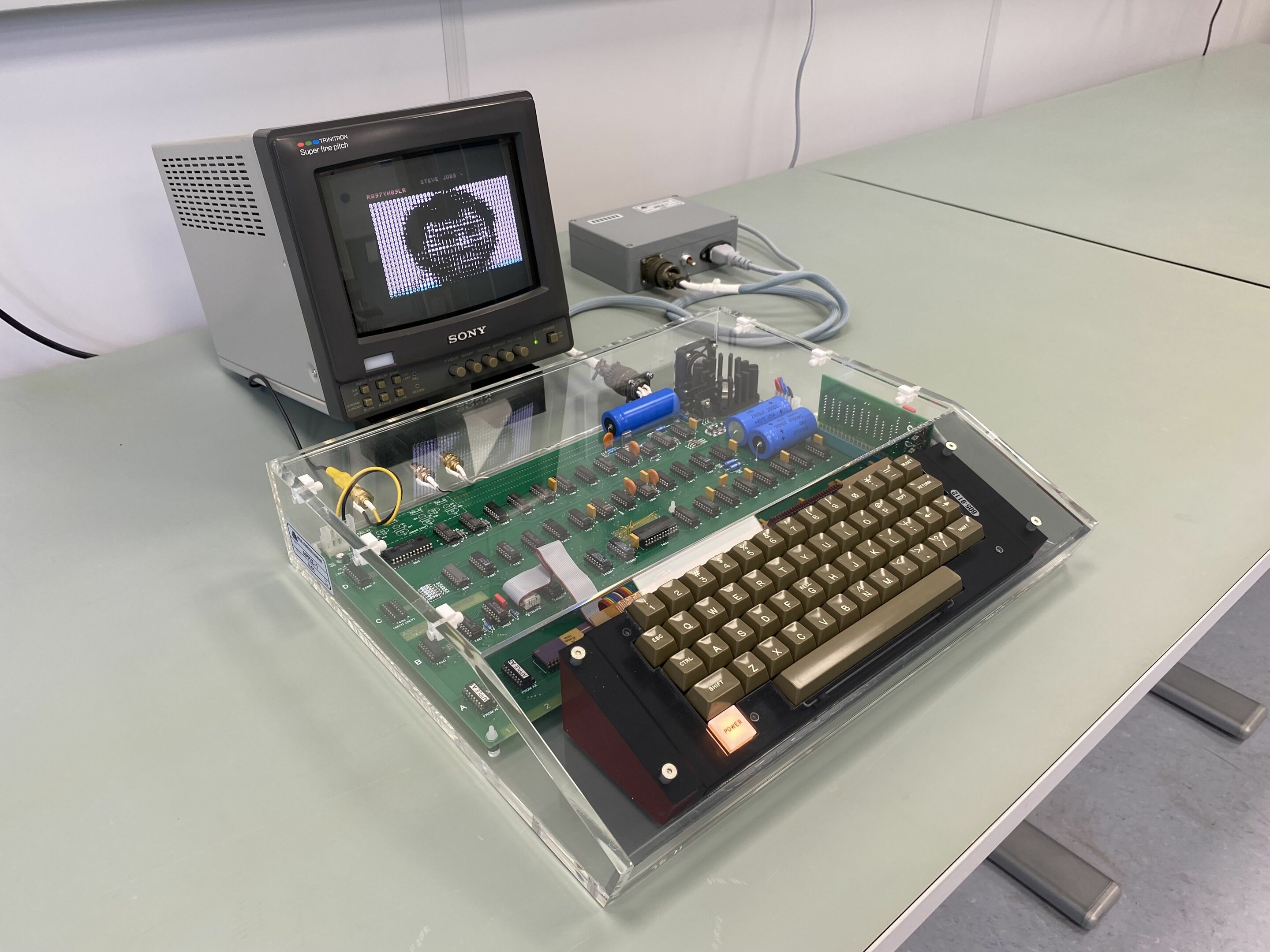 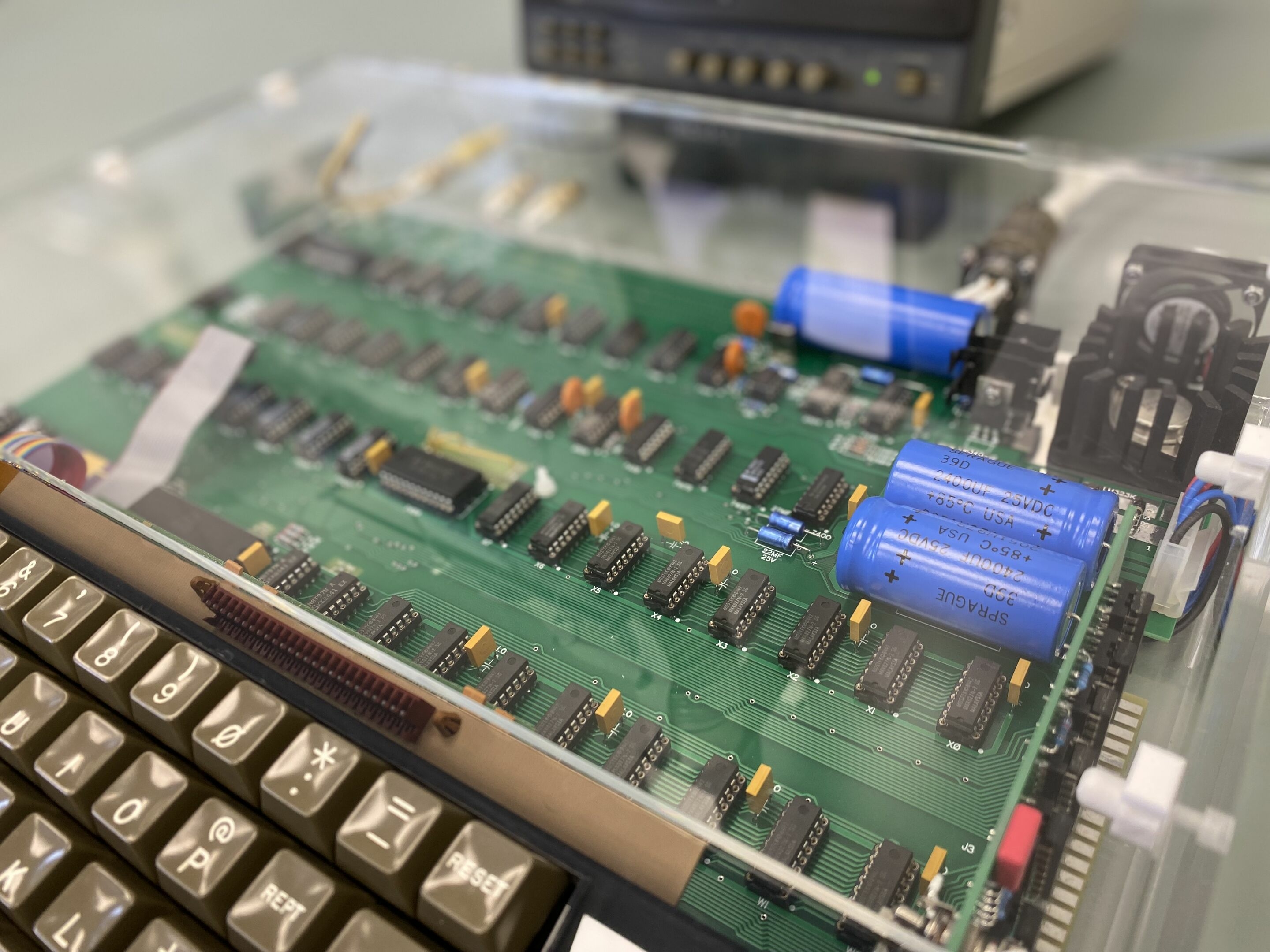 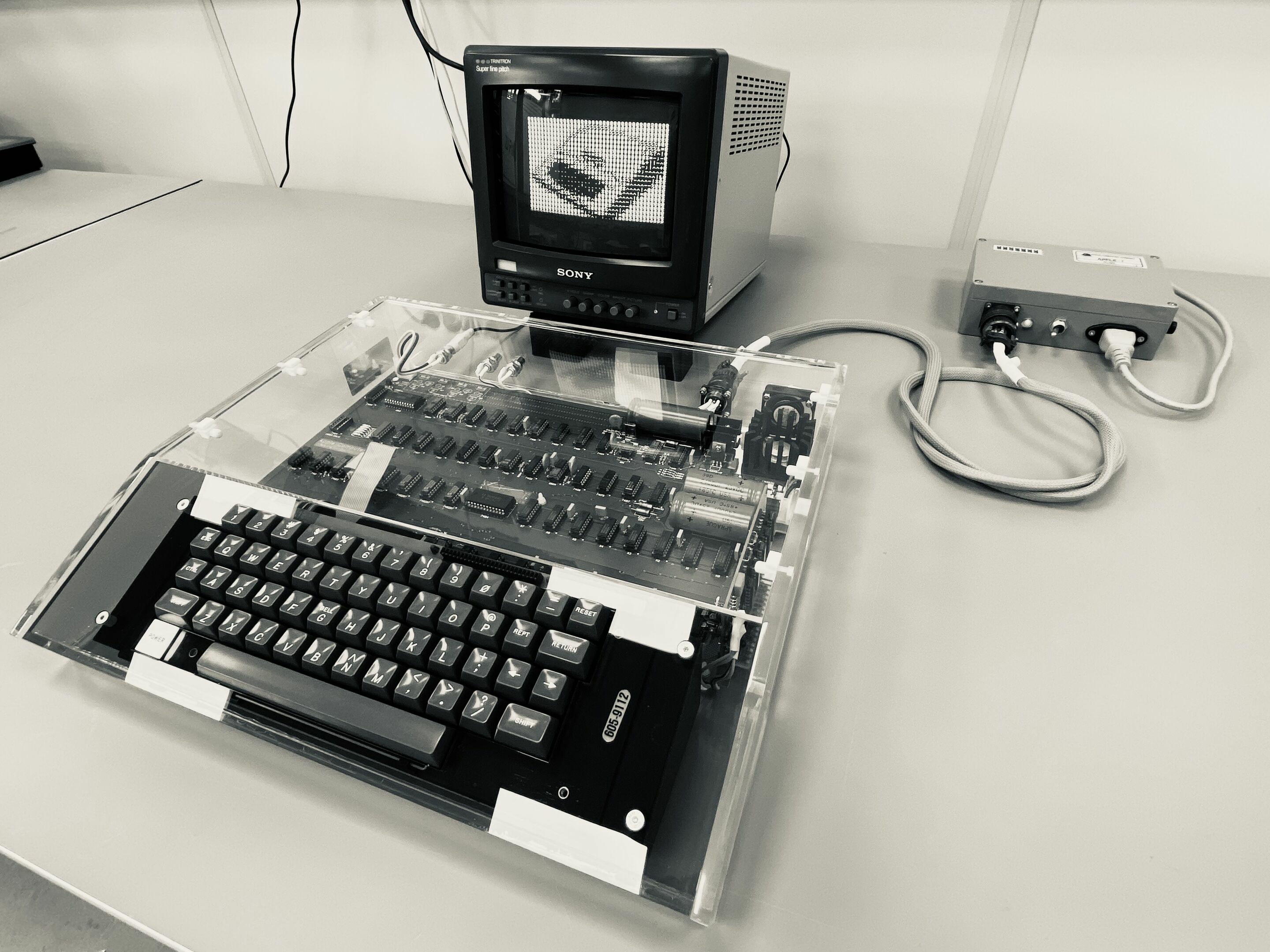 I love your implementation! :-)

You need to help me get mine like yours :)

Well done. It looks really great. I like the connectors on the back panel, especially the one for the power supply. The plexiglass case is gorgeous.

That is a work of art.  Beautiful.

Congrats with your apple-1 clone - really a fantastic job with the plexiglas cabinet.