I'm hoping someone else on the forum has some experience with the Vtech Laser 128 and might be able to help. I've been troubleshooting an issue that's driving me a bit crazy. I am fairly new to electronics/electronic repair; however, about 8 months ago, I decided to open it up and pre-emptively replace the capacitors. After some research I thought it would be a good idea to use poloymer caps instead of electrolytic for long-term prevention of issues. In hindsight - probably mistakes on both accounts. Regardless - the computer works, boots fine etc. However, I'm now seeing a color shift happening through the composite out: 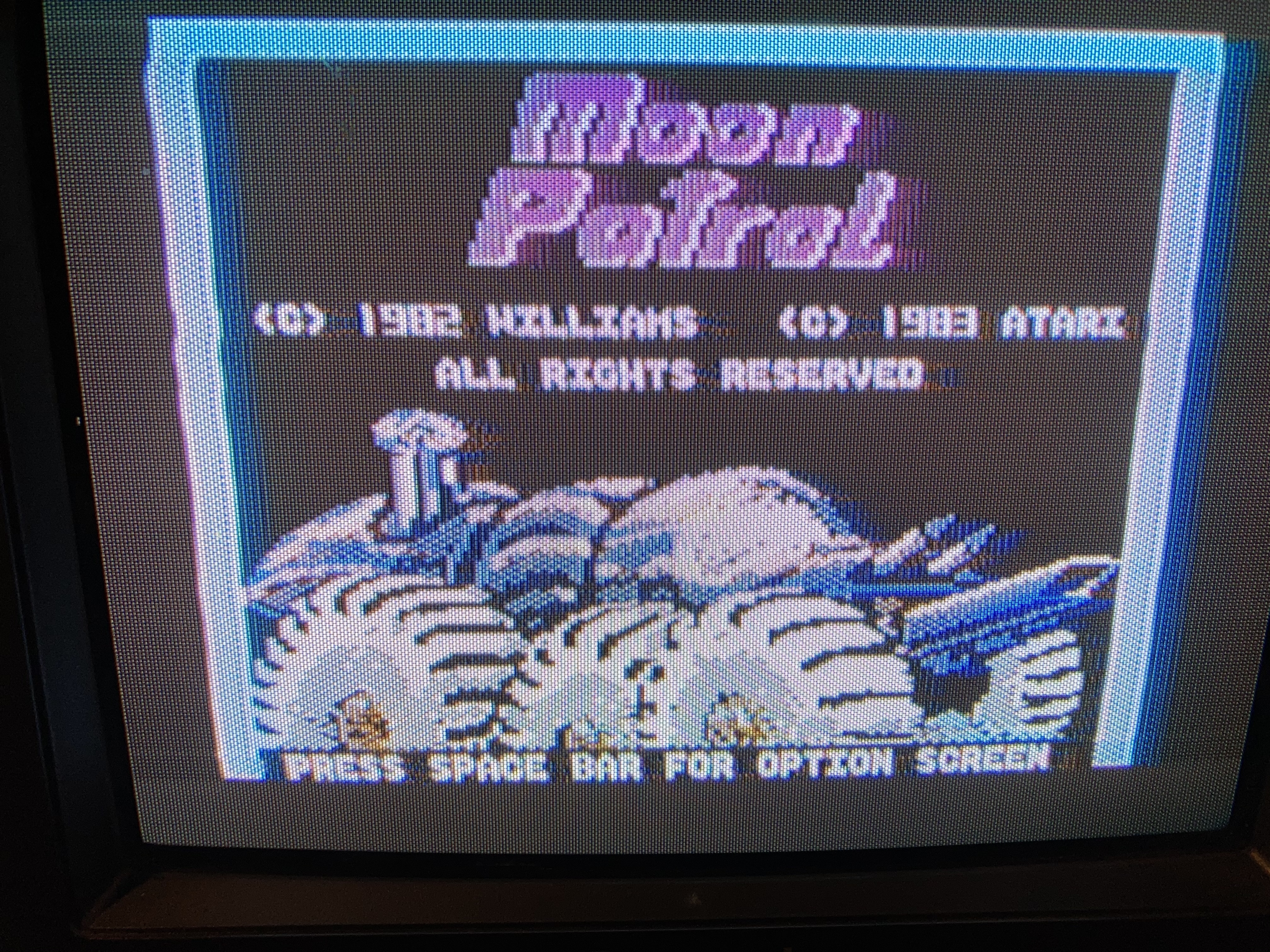 As you can see in the picture above - there is a fairly dramatic color shift/ghosting that is happening - especially visible on the border and Moon Patrol text. I know with artifact color - there is going to be a lack of clarity/sharpness; however, this is unusual and I don't recall it before I did the recapping.

I have been referencing the tech reference manual: https://www.apple.asimov.net/documentation/hardware/machines/Laser%20128%20Series%20Technical%20Reference%20Manual.pdf

and have been trying to troubleshoot. I've had a few conversations with others, but while they have experience with electronics/retro PC repair - they don't have as much experience with Apple II stuff.

Here's what I've done so far:

1. Backed out most of the polymer caps, especially relatated to power supply as I read after the ESR values could be a factor. There are a few polymer caps in place yet, but I'm not convienced this is actually an issue. . . and it's a real pain with the large ground plan on some of the. So pausing on that for now.

2. Checked on multple CRTs + a modern display with composite in. All have the same ghosting

3. Checked the composite jack itself for issues/solder cracks + used deoxit. It seems very sturdy + there is no change when fiddling with the jack while it's on. I.e. no signs of a bad joint or jack.

5. Purchased an RGB2HDMI adapter from texselect and created the custom cable to try RGB out. With RGB out - there is no ghosting! Perfectly sharp. But would still like to figure out why composite is an issue.

From other conversations - they mentioned this might be an issue with the composite sync. This does seem plausible, especially since the RGB out is working. However, looking at the schematic - no capacitors were replaced in that area of the circuit/nothing was touched - so I'm a bit puzzled what could be wrong there.

I'm probably forgetting some details. However, I really crossing my fingers that someone on this forum has a some suggestions/next places to look. Should I back out the remaining polymer caps (probably around 5 left out of the 35+ caps)? It looks like the RBG out actually has an NTSC/composite pin - I could create another cable I assume with that (+ ground?) and try testing that?

Appreciate any/all help in advance! Thanks!

Great descritption of what you have tried so far.  It seems you are very much on track for the common problems and have eliminated most of them.

1) What effect does the mono/color switch have?  This might inidicae a color artifact issue.

2) Definitely try the RGB port composite cable as I think that provides an alternate sync from the primary composite port.

3) I suppose replace the last few upgraded caps would eliminate another unknown and restore it to original, whatever good that is...

Thanks for the reply and appreciate your advice.

I tried a couple:

1. Composite out from the RGB = same effect

2. Very interestingly - with mono vs. color - the mono also has the same ghosting affect.

I can do the caps - but any other ideas/thoughts based on the above tests? Really appreciate the help!

Your video output is way too hot. The background should not be light gray, it should be black. I am not sure how close the Franklin output circuit is to the Apple II, but something is not right. A wrong resistor or cap, or some component is failing.

If this happened after a recap, then likely a cap is reversed, or the wrong value (or mismarked) then I would retrace all my steps.

I think part of the reason the background was so bright was due to the monitor contrast and brightness settings. I played around with that and I think things look more normal - do you think the video output is still too hot based on this image?

I will double check the caps though. 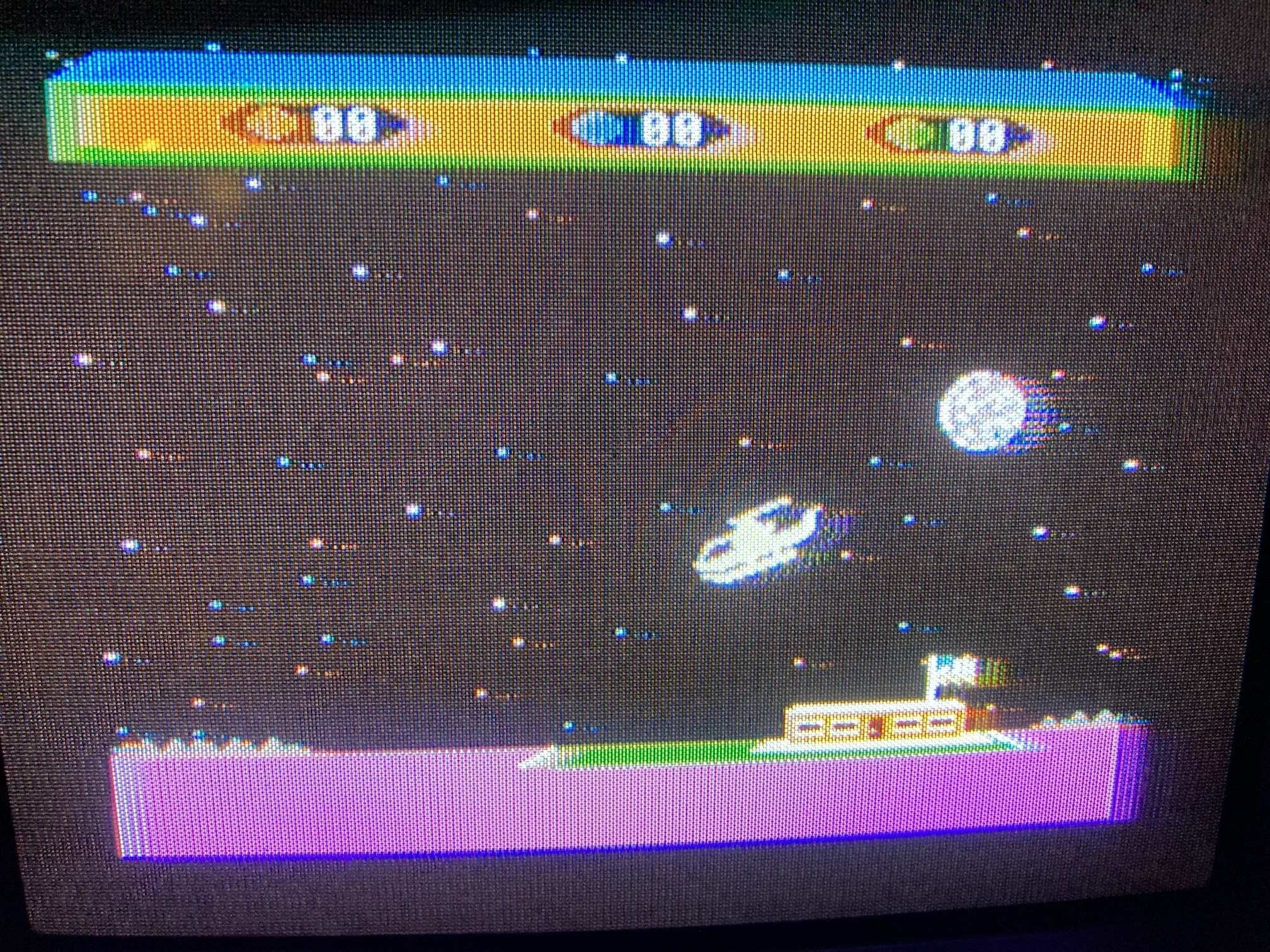 Is this a monitor or TV? If a monitor, does it have one or two input connectors?

Looks like a lot of ringing in the video signal. Might be caused by lack of termination on the monitor. Would also explain the high video level.

Hard to tell from the photo, but it still looks too bright to me. Background should be black, not grey. The Apple II can't output anything except a black background...

I'd agree it looks extremely bright.