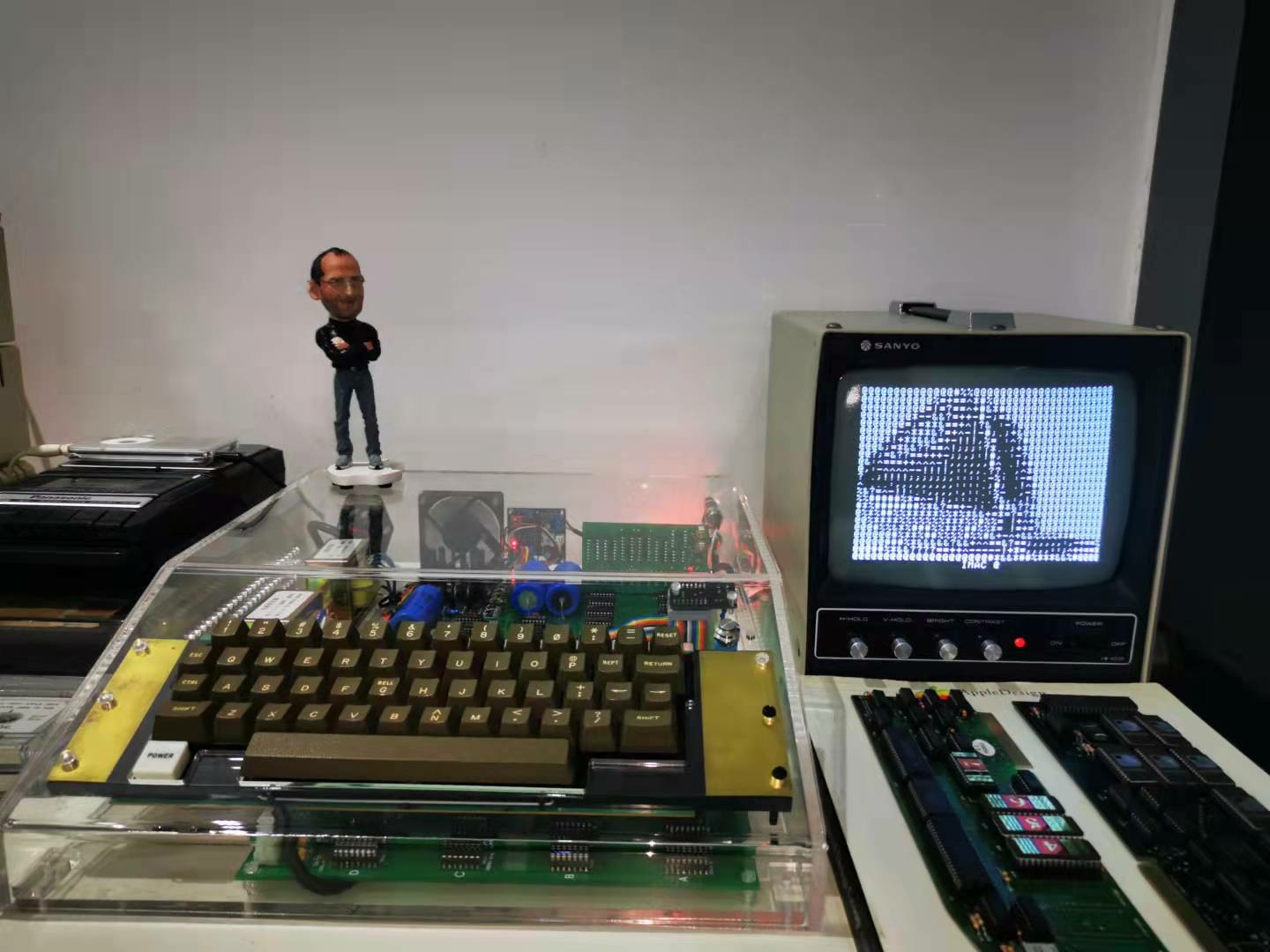 ... in fact I was selling them for a year now with my famous IC kits. I also had Motorola MCM4027AC3 in CERDIP which were a little bit more temperamental in the hostile Apple-1 environment with all its ringing power and signal lines. The advantage of CERDIP is that it's a hermetic package (if the glass seal is intact) and so these ICs will not decay like all those in the plastic packages. Hermetically packaged ICs will last for centuries unless a nasty environment rots their leads away. When being powered up, electromigration will eventually get them, or mobile ions, but if properly stored, hermetic ICs in tubes show much less duds than the plastic ones (I can show you piles of such duds).

The key to make the DRAM work on an Apple-1 is:

a) correct timing, the oneshot in the 74123 must make a 480ns wide pulse which almost never happens if you use the 27K resistor.  With my kits I provide hand-selected components to get the proper timing.

b) high quality bypass capacitors. The performance of the ceramic disc caps generally sucks, as the ceramic material needed to get the 100nF capacitance with one single electrode pair is "slow", but there are more modern multilayer ceramic caps out there who use a ceramic material of a much higher electrical performance.  Apple used them for the 2nd production run known as the "NTI" version.

I have found that with these high performance multilayer bypass capacitors, an Apple-1 clone using MK4027N-4 may not need my 'reliability mods' in most cases. But for reasons of period correct looks (some builders want to build clones matching the 1st production run with brown disc shaped bypass capacitors) I offer buyers of my kits both options. If the DRAM does not work robustly due to these older and lower performing disc capacitors, the 'reliability mods' can always be added on the solder side of the PCB, where they typically are out of sight. The 'reliability mods' can be found here in this thread, post #4:

Here is a photo of  high performance multilayer ceramic capacitors made by MuRata/Japan in 1986: 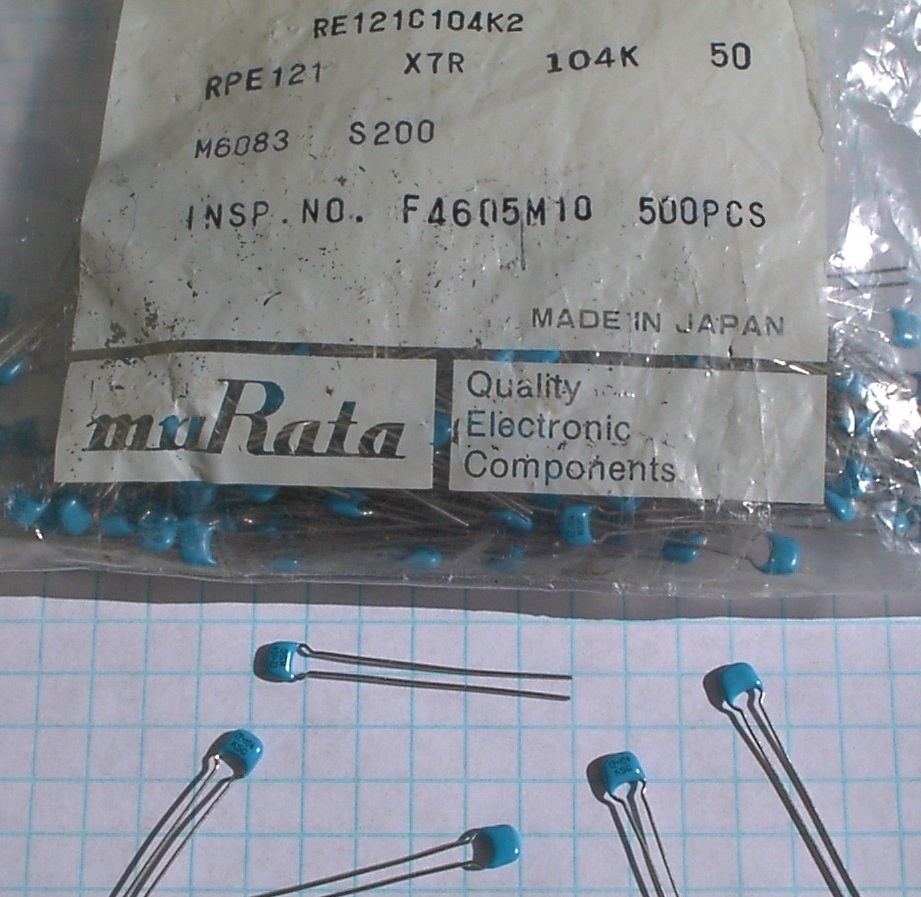 These come as close as it gets in looks to those in the "NTI" / 2nd production run originals. Maybe they are the same type. MuRata was one of the few Japanese companies who pioneered this type of multilayer ceramic capacitor technology and they were the leaders in terms of quality and performance. In 1986 I worked as an intern in the passive components qualification lab of a major mainframe computer manufacturer, which were capacitors and inductors and delay lines made out of the former. We had old but high-end Tektronix sampling scopes to do measurements up to the GHz range and we used semirigid impedance controlled plumbing for the test fixtures. The results were telling. These Japanese multilayer capacitors were truly a gamechanger in terms of electrical performance at high frequencies. The worst part of them were the leads which are inductors of several nH. This problem was later solved by the SMD chip type capacitors. In this lab I also learned the possibly catastrophic outcome of solid tantalum capacitors having been reverse polarized ever so briefly. They look fine for a while and seem to do their job but they are damaged and their leakage current goes up, making local hot spots, causing even more damage to the dielectric, and this reaction runs away until they ignite in a brilliant white glow that is hot enough to ignite FR-4 PCB base material to burn with open fire and keep burning (despite of the flame retardents in it). We did that test intentionally, of course. This is why I warn "my" Apple-1 builders to avoid solid tantalum capacitors like the plague. Just sayin' because we at the topic of capacitors right now. Even low voltage electronics can have its perils if you don't know what you are dealing with.

Online
Last seen: 30 min 10 sec ago
Joined: Jan 8 2021 - 05:18
Posts: 225
Hi Uncle Bernie!
If they were green they would be priceless. I'm already tired of looking for green little capacitors at least a little like the ones used in the original Apple-1 NTI version. The Centralab capacitors are very similar visually. But they are also rare. 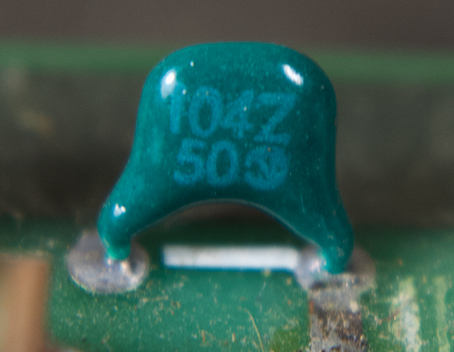 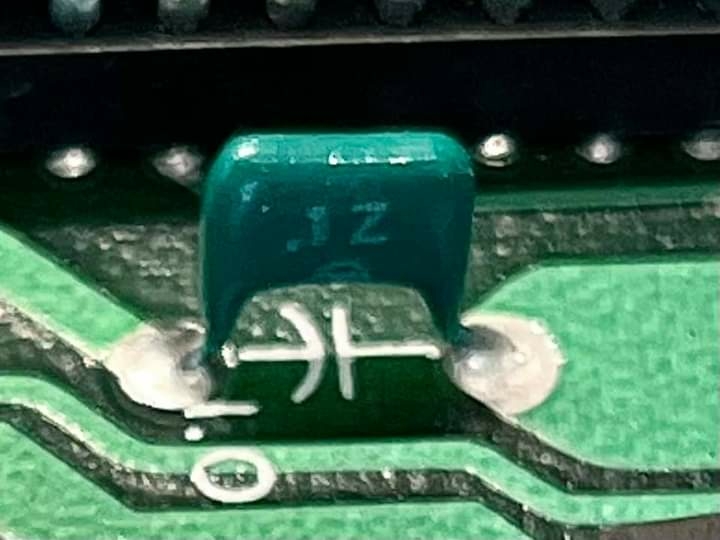 "If they were green they would be priceless".

These capacitors in the photos of the originals are not really green, they are green-blue. This color is unobtanium in my opinion. But you are right that if I had the exact ones like in the originals they would be 'priceless'. I know that the original brown BEL brand disc capacitors, the same type as used in the originals, sell for $200 plus shipping per set of 17. IMHO this is insanity for any clone build. But if you have to restore an original Apple-1 into working condition and a few of the capacitors are cracked / boken, which happens easily, then the $200 probably are OK given the fact you can auction the restored original Apple-1 off at $1 million or so. But for a clone, naaahh. Come on ! For the BEL brand capacitors there is a source where they can be salvaged from. Which is a collectible by itself and sells for $50-$150 if not in working condition. Which may explain the $200 price for the set of 17 BEL capacitors.

I always wonder how far the pursuit of 'exact' clones can be driven before it crosses the line where it turns into insanity / obsession. My pragmatic take on it is as follows, and it is very common in "professional forger" circles, and I don't mean mere criminals, I mean those honest craftsmen who build clones of rare items for museums or private collectors: the goal is to build a clone that, if displayed alone, and under proper lighting conditions, and in the proper context, will give the same visual impression to the casual observer (or visitor of the museum) as the original would do in the same spot. It's all about the "look & feel" being right (the "feel" does not apply if you can't touch the object on display).  Since human senses are not perfect and can be tricked, a 100% perfect clone is not necessary. There can be small, subtle differences as long as they are not easily noticed. And still the casual observer (non expert) would be tricked into thinking he/she saw an original in that museum or private collection. This illusion falls apart in the moment you place a true original next to the clone. Then even laymen could spot small differences and once the spell is broken they would look closer and more and more differences would be noticed.

Only fanatics would cross the line where building clones turns into insanity / obsession. I try to stay on the sane side, and use parts which are close enough to help generate the right impression on the casual observer. You can botch this impression by using one wrong part that sticks out - such like use of metal film resistors or carbon film resistors in lieu of the period correct carbon composition resistors - these have a peculiar shape and surface, and look different enough from the more ubiquitous modern types to be noticed. Date codes on ICs - not so much. Height of the heat sink (1.25" vs 1.00") is not very likely to be noticed unless you put them side by side. And so on.

The ultimate test for a clone would be to "age" it a bit with dust etc. and then present it on some VCF or similar event in a proper context (old transformers, built into an old attache case, yellowed and nondescript old keyboard) and claim it's an original in any conversation with an onlooker. Then you count how many swallow that and how many laugh at you. After a day or so you can do the math and calculate your success rate and the confidence interval based on the number of samples. And then you have the science about your clone being "perfect" or not.