I recently found a need for a sturdy iPod case -- one that would hold the iPod safely and provide substantial protection, preferably from the elements. This need arose when my fiancée got a new job and, having neither a driver's license nor a car, she needed to start taking the bus to work. It's a long commute, and not the safest one either. She likes to listen to her iPod, but of course was afraid of being mugged if she had it out in the open. She'd been making do by leaving her iPod in her purse, but that became a hassle with the headphone cord becoming tangled, and also having to dig through her purse to find the iPod when she wanted to change the volume or track. (Naturally, she doesn't use the Apple headphones -- she'd be asking to get mugged if she wore those.)

I was surfing at work one day and came across an article on Engadget about the RetroPod, an iPod case made out of an old Sony Sports Walkman. This struck my interest as this seemed to be the perfect solution to my fiancée's problem. It would allow her to keep the iPod out in the open, but disguised -- any casual observer would think she was simply listening to the radio or a tape.

Unfortunately, the RetroPod was expensive, and eventually sales got shut down by Sony because Sony felt that it would make people mistakenly think they made iPods (whatever). But the design made me remember that I had an old sports radio laying around, so I decided to make my own RetroPod. I call mine the SportPod.

The sports radio isn't Sony. In fact, it's a piece of junk made by Wilson (yeah, the same people who make basketballs). It had an analog tuner and cassette player, and the audio quality wasn't particularly good. 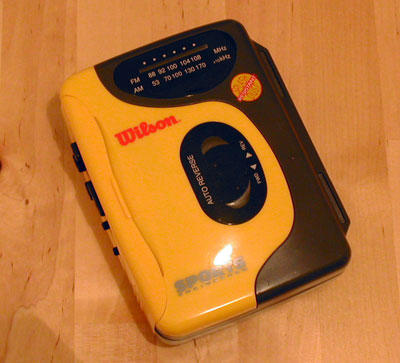 The donor sports radio for the SportPod project.

Unfortunately, I didn't take many photos of the construction process, but that's OK in the end because the specific steps taken will vary greatly with the donor radio. What's nice about this one is that there's a decent amount of weatherproofing to it, so hopefully the iPod will stay nice and dry. I don't expect it to be submersible or anything, but it should be able to withstand a bit of rain easily.

With this radio, all I really needed to do to gut it was to remove several screws from the inside and the cassette mechanism and circuit boards came out in one piece. I then shaved down the internal plastic standoffs and some other structures for the battery compartment, and was left with a completely empty shell. Thankfully, the rubber cassette transport buttons are attached to the case itself, not the innards, so I didn't need to do anything special to keep them in place.

I didn't want to just provide a passthrough audio connection, because it would mean having to open the case in order to change the volume. I had originally toyed with the idea of somehow creating a passthrough connection so the iPod's corded remote control could be used, but that would involve two things: First, I'd have to source the female jack, which would likely involve finding a dead iPod to scavenge it from (which would be relatively costly, as even broken iPods can fetch a decent amount on eBay). Second, it would mean I'd have to find a male jack, which would mean I'd have to cannibalize a remote control. When the cost of the broken iPod and remote control were totaled, it would have cost me way too much to be worth the effort.

I decided instead to at least provide an external volume control for the headphone jack. The volume and tuning knobs were secured to the sports radio by a bolt that threaded right into the potentiometer on the circuit board. That board being gone, I had to come up with another way to interface the external volume knob with a potentiometer.

While digging through my parts bin, I found one of these. It's an inline volume control, with a right-angle miniplug on one end and a potentiometer in the middle. With some careful cutting and soldering, I got it wired up to the minijack mounted in the casing and, with the help of some superglue, got it mounted in the case. I had cut off one side of the potentiometer casing, so the entire surface of the dial was visible. I glued it to the casing so the dial faced the hole the volume control sat in. All I needed to do was superglue the volume control to the dial. The tuning knob was just superglued in place; it's just a dummy now (along with the rest of the switches, which are also glued in place). 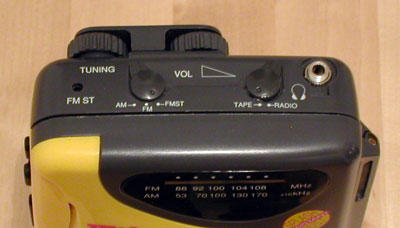 Only the volume knob and headphone jack are functional on the SportPod. The rest are superglued in place.

The rest of the hack was pretty easy. I found some dense open-cell foam and carefully cut it into three pieces. The first was the liner for the lid, which I made a little notch in so it wouldn't get hung up when the case was closed. The second was a 1/4" sheet that lined the bottom. The third was the sides that held the iPod in place and provided cushioning agaist side impacts. All the pieces were held in place with hot glue.

All I had to do was drop in the iPod, plug in the headphone cable, close the case and I was set. 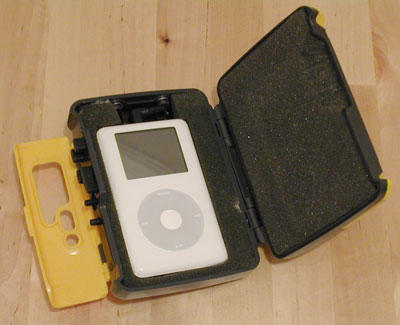 The final product. Note the cutout in the foam on the lid to allow the case to close properly. 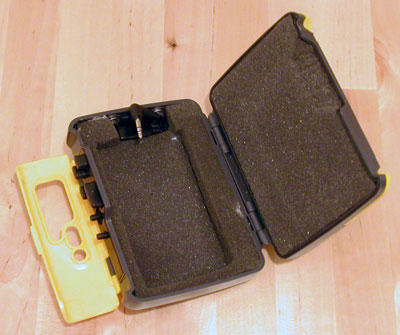 The SportPod sans iPod. The iPod is protected on all sides by foam padding. 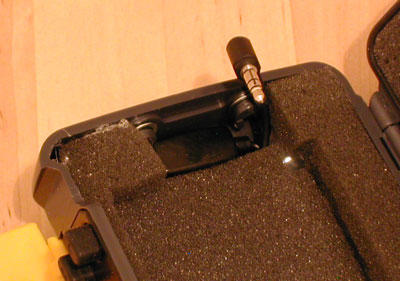 I paid a total of $8 for this hack, and that was just for a new tip for my Weller WLC-100 soldering iron. If you had none of the parts, I'd estimate the total cost at about $30 (assuming you found a cheap sports radio on eBay or something). This hack required a lot of attention to detail, but I say that only because I wanted it to look good.