After reviewing and ultimately disliking the ColdHeat, I found myself still looking for a cordless soldering iron that I felt I could do quality work with. I have an excellent desktop iron, a Weller WLC-100, but that's hardly portable and is a pain to dig out and set up just to do a few quick solder joints. I figured I'd end up having to buy a butane-fueled iron, but then I found something much better.

Well, in the interest of full disclosure, that much better something actually found me. A few weeks after the ColdHeat review went online, I was e-mailed by Hakko USA and asked if I'd be interested in reviewing its cordless iron, the FX-901. I agreed, and shortly thereafter I received the iron with the price voided out on the invoice. 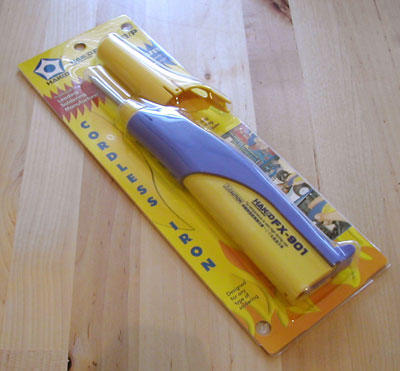 The Hakko FX-901 in its retail packaging.

The packaging the FX-901 comes in is pretty straightforward. The iron and its accompanying safety cap are packed in a cardboard-backed blister pack. There's no instruction manual, no guidelines on how you need to solder with the iron -- in fact, right on the front of the package it instructs to "use standard soldering techniques." There's another interesting bit of information on the front of the packaging: "Safe! No spark! No flame!" After my last review, I know exactly what that info is referring to; I'll leave it to you to figure it out.

There's some other useful info on the back of the package, such as instructions on how to replace the batteries and tip. The iron uses four AA-size batteries, which aren't included with the iron (but when was the last time you saw AA batteries included with a product anyway?). The tip that's included with the iron is of the pencil variety, with a nice sharp tip for precision work. There's a chart on the packaging that shows how long two types of batteries, alkaline and NiMH rechargeable, last and how the operating temperature of the iron decreases with their use.

The battery life-iron temperature chart printed on the back of the FX-901 packaging. Image courtesy Hakko USA.

I was surprised to see that NiMH rechargeables were reported to last longer than alkaline batteries. Alkalines offer a higher voltage output, which one would assume would yield a longer operating time -- they generally do in other devices. But strangely, even though they output less voltage, NiMH rechargeables are reported to last almost twice as long as alkalines, 120 minutes vs. 70. I can only guess that NiMH rechargeables are much more linear in how their voltage output decreases over time, and that's what can make them last longer.

The safety cap serves two purposes. First, it protects the tip (or protects other tools in your toolbox from the tip, depending on how you want to see it), and second, it keeps the power switch from inadvertently being turned on. The cap snaps on solidly and fits well. It provides a nice space around the tip internally, and is vented at the end; I was able to put the safety cap on the FX-901 while the tip was still hot, but this isn't endorsed or recommended by Hakko. 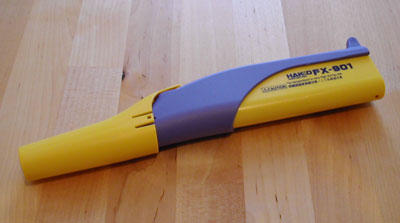 The FX-901 with safety cap attached.

The yellow part towards the back of the iron is the battery cartridge. It's removed by sliding a locking tab at the end of the iron, and then pulling the cartridge out of the body. It's easy to load the four AAs, and there's a diagram printed on the side of the cartridge (hidden from view when the cartridge is installed in the iron body) that shows the polarity in which the batteries need to be installed. With the batteries installed, the iron is decently weighted, not too light but not too heavy. The iron is heavier towards the rear, but the balance isn't enough to make the iron difficult to hold or otherwise affect the ability to solder. The top-mounted power switch slides solidly, and a red LED illuminates when the iron is turned on.

The FX-901 uses pretty conventional technology to heat the tip, so I figured the iron would take several minutes, like my desktop iron does, to heat to operational temperature. Surprisingly, it only takes a minute or so, much faster than I was expecting. The operational temperature of the iron was good too -- it's not adjustable, and won't get as hot as my desktop iron running full blast, but it gets plenty hot to melt solder and heat wires and terminals quickly.

The FX-901 without safety cap. The iron has a comfortable weight to it and is easy to hold.

My primary test for the iron was with wiring and connectors. I tinned several ends of Belden PY balanced microphone cable, and I couldn't really tell the difference between tinning the leads with the FX-901 and my desktop iron. I then soldered on some Switchcraft and Neutrik XLR connectors and, again, couldn't see or feel a discernable difference in solder joint quality between the FX-901 and the desktop iron. Both irons heated the connection quickly and evenly, which made for smooth, defined solder joints. All of the joints I made with the FX-901 were solid and passed a clean signal.I didn't have a printed circuit board to test the FX-901 on, but I suspect it would work just as well as a desktop iron there too. The sharp pencil tip should make it easy to work on smaller components, and since the iron heats up the tip like conventional irons do, there should be no worry about killing ESD-sensitive components. I'm not sure I would do marathon PCB soldering sessions with the FX-901, nor would I solder under a microscope with it (leave that to a desktop iron with variable temperature control), but for routine repairs and mods, the Hakko should work just fine.

Overall, I'm very impressed with the iron. It heats up quickly -- quicker than many desktop irons, even -- and feels natural to use. Because of its size, it's probably not appropriate for use on heavy-gauge wire, but neither would a comparable desktop iron. The back end of the iron is perfectly flat, so it will stand stably on a flat surface, and it will also lay on its side without the tip touching the work surface, so no soldering iron stand is necessary. It's probably a good idea to turn the iron off when you're not actually soldering, in order to maximize battery life.

The FX-901's two drawbacks, as I see them, are rather trivial. First, though 70 and 120 minutes of runtime using alkaline and NiMH batteries, respectively, is quite decent, it would be nice to see that extended. Second, the FX-901 isn't as easy to find in stores as some of its competition; neither Digi-Key nor Mouser carry Hakko products. However, it's readily available online; just Google for it and you'll find a number of vendors who carry it. Hakko USA's Web site can also point you in the direction of a local reseller at http://www.hakkousa.com/map.asp. Considering the price, which is commonly about $30, the Hakko FX-901 is a great value in my opinion -- it combines competent, solid soldering ability with good portability. It won't replace my desktop iron, but it's definitely earned a place in my toolbox.

Here are my pros, cons and overall rating of the FX-901:

Cons:
Battery life good, but could be better
Iron could be hard to find in some areas

Good detailed review.
Thanks a lot.