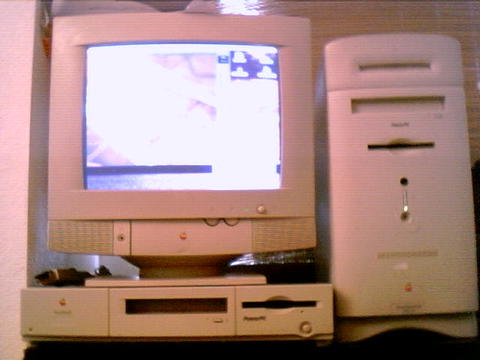 Viola! Just bought the 6500/275, also bought a 6500/250 mainboard for the AV I/O, TV Out, COMII Ethernet. Little did I know the 275 (which had the TV Out and COMII removed) came with a 512K L2 chip, score! Sanyway it's all happy and taking its place as the TV. Oh and when I took it apart to have a look inside, there's lots of places to tuck things, just need a bracket that mounts on a 3.5 that will allow me to mount another 3.5 piggyback and I can get 3hdd's in this thing.

6100 isn't booting off HDD anymore, will boot off cd, i've reinstalled the OS, and it will reboot to that drive but turn it off and it won't boot off the HDD.

Dog
Oh and if anyone has Office98 they'd be willing to donate/sell . . .

Okay so nobody care's what the loser around the corner picked up. What if I stuck a voodoo2 in it? Maybe if I got a picture of the back of the 6500 ya'll take note

Hrmm, maybe I should paint it to match my PC tower. They're the same size. I'll have a custom 3.5" bracket soon, so I can put my 18gb 50pin ontop of the zip drive. Should work out perfectly since the line there has a terminator on it. Then I should have 6 + 18gb's to setup, gotta get it on the network. I need software info for 8.6 (9.2.2 would be a joke unless I got a G3 card) ideally this machine is going to be used for movies, music, tv. I got okay tv software (AVP), need working divx, and mp3 possibly wma(hah) media player.

Don't sweat it, AFboth and the barracks all have activity levels equivalent to a morgue at midnight lately. Maybe it's a post Super Bowl Party recovery period, normal February doldrums or techno nerds moping about the approach of yet another no-nerdette Valentine's Day, dunno.

If it's any consolation, I'm jealous, I still haven't got a single 6500 MLB yet.

Congats on the finds. But Trash is right, the activity levels have been on par with a sloth. I thought that my new hacks thread would have yields more attention but aside from a couple bug reports nothing much.

The instatowers do have a lot of space to play with once you get them open. When I did Diamonds I could have put the CCFL inverters whereever I wanted in the case pretty easily.

Go to the old fritter, theres a link on the front page. Tons of people are still using it.

Both Trash and I have been bouncing back and forth (Notice AF *both* in trash's post?) Don't know about dog but I bet several other members have been as well. Still replys have been fewer and slower over the last week or two even combining the two - at least it seems that way.