I recently obtained a non-functional but nearly new Apple USB keyboard. This is the most recent model, with a transparent base. 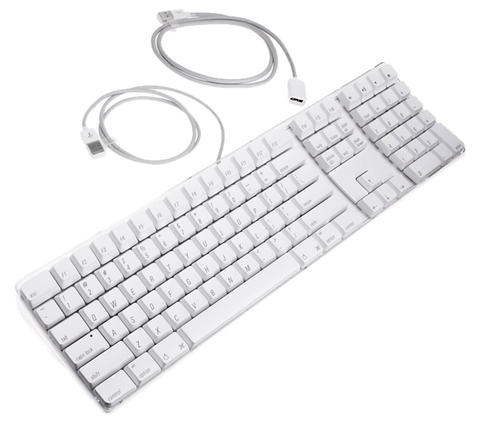 What's appealing to me about this keyboard is the small desktop footprint, yet it has full-size keys - unlike the compact keyboard that shipped with the original iMac.

After cleaning what looked - and smelled - like a coffee spill, I found the keyboard worked fine with the exception of the left control key. I decided to see if it could be repaired...

The keyboard is held into the transparent case by three very small hex screws. Not having the proper tool on hand, I found a jeweller's screwdriver, sides slightly filed down, was able to remove the screws.

There are two ribbon cables that hold the keyboard to the case at this point: 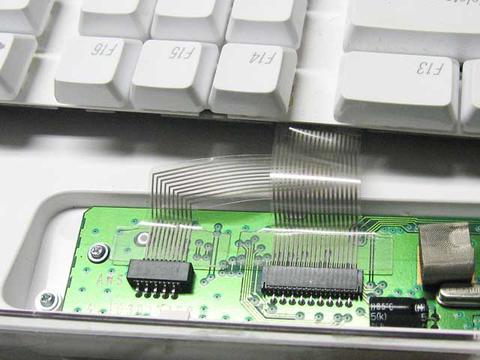 They pull out by holding the clear plastic "wings" on each cable, and go back in the same way. No clips to remove, etc. 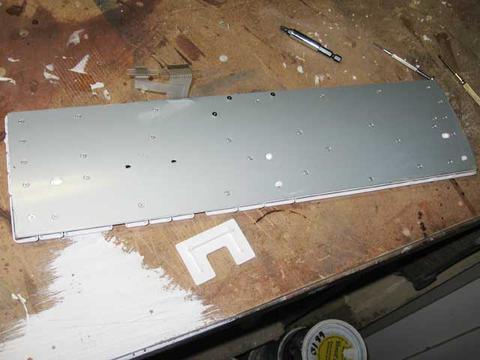 Looking at the metal backing of the keyboard, there are several dozen screws. Yep, you've got to remove them. A Phillips jeweller's screwdriver fits perfectly. A larger driver may have trouble. There are three raised screws near the top centre. These do not need to be removed. Two of the screws will drop a piece of plastic that sits above the cursor keys.

Lift the metal plate off the keyboard. You will see layered sheets of plastic. This is our goal. Carefully lift it off the keys. You don't want to send the little rubber grommets underneath flying. 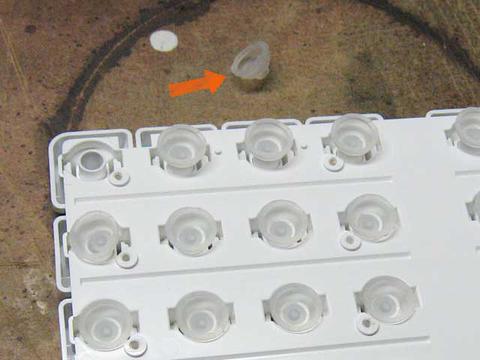 If your keyboard has been a spill victim, some may be stuck to the plastic. Carefully remove them.

The plastic sheets are the keyboard switches. A top and bottom layer are covered in conductive printed paths to each key, while a middle layer, with holes at each key position, provides an air space between conductive pads. When a key is pressed, the rubber grommet presses down on the top layer, and it is pushed down to contact the bottom layer, completing the circuit. This is a very clever, or very cheap, design. It's certainly prone to damage from spills. 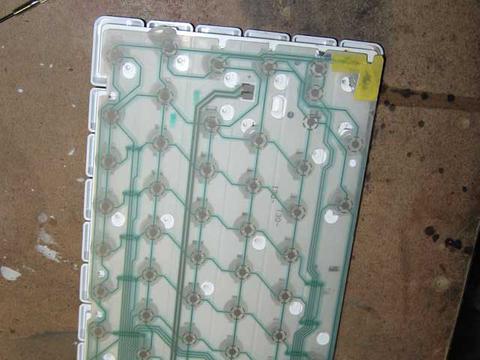 I tried cleaning the contacts at left control key position, as they were blackened...and smelled like coffee. After continuity testing with a multi-meter, I found the bottom layer had corroded, and the contact pad was no longer connected to the rest of the circuit.

The proper fix would be to use a conductive paint, like those used for repairing automotive rear-window defrosters. Having a desire to not spend any money on this, I tried something free.

Move the top and middle layers of plastic out of the way. Do not completely separate the three layers. I scraped away some of the green covering on the circuit path near the control key pad. Careful, as it doesn't take much to scrape away the conductive path as well. The orange in the photo below represents where the original circuit path was. 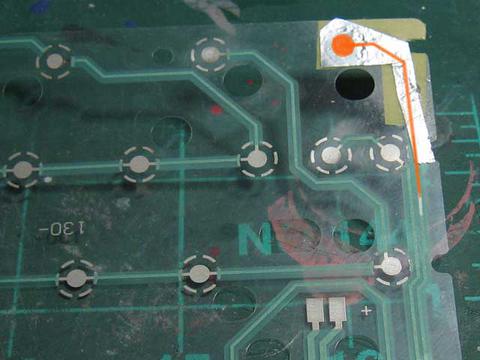 I cut a piece of tinfoil to shape, and with a toothpick, drew lines of superglue on either side but not on the exposed circuit path, as well as over the control key pad. I placed the foil overtop, and clamped it to my desk. 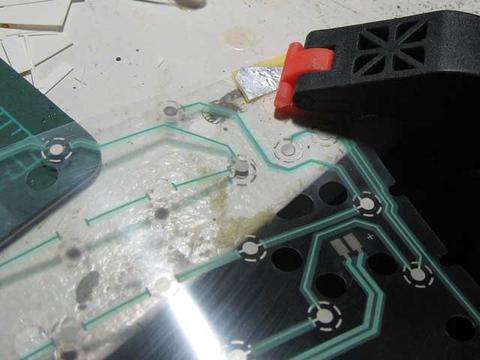 The clamp was centred over the scraped circuit path, as I want the foil to be glued in contact with it. I left this to sit overnight. I checked the connection by placing one multi-meter pin on the foil, and the other on the next available pad in the circuit. There should be little to no resistance measured.

Assembly is the reverse of the steps above. Line up the plastic on the keyboard grommets as best you can. Make sure all the grommets are sitting properly before placing the metal plate over the plastic sheets. I pressed the plate down and held it while I screwed in the first few screws. I put several middle screws in first, then worked my way from right to left.

The three hex screws back in place, I plugged the keyboard back in, and it works fine. Using keycaps in OS 9, it looks as though a gentle press of the previously bad control key results in several momentary contacts, but under normal usage works without any ill effect.

As stated above, conductive paint would be a much more reliable solution, but the instructions above will hopefully help regardless of which method you choose. Apple keyboards are no longer the expensive peripherals they used to be, and many would rather buy a new keyboard than bother with an attempt at repair (which is how I received the keyboard in the first place). Part of the appeal of this project is the joy of getting something for nothing. It's also saved one item from going into landfill, so for someone like myself who enjoys tinkering, the project was very worthwhile.

Disassembly will differ, but the black and white versions of the Apple USB Extended Keyboard use the same layered sheet for switches.

And there is the always-present Murphian truth that component failures always occur when there is least chance of a purchased replacement (eg, at midnight, on a plane flight or at a desert island retreat, &c.), so even semi-permanent fixes (no disparagement of yours above intended) are worth their weight in rocking-horse excrement.

I think it's cheaper buy new