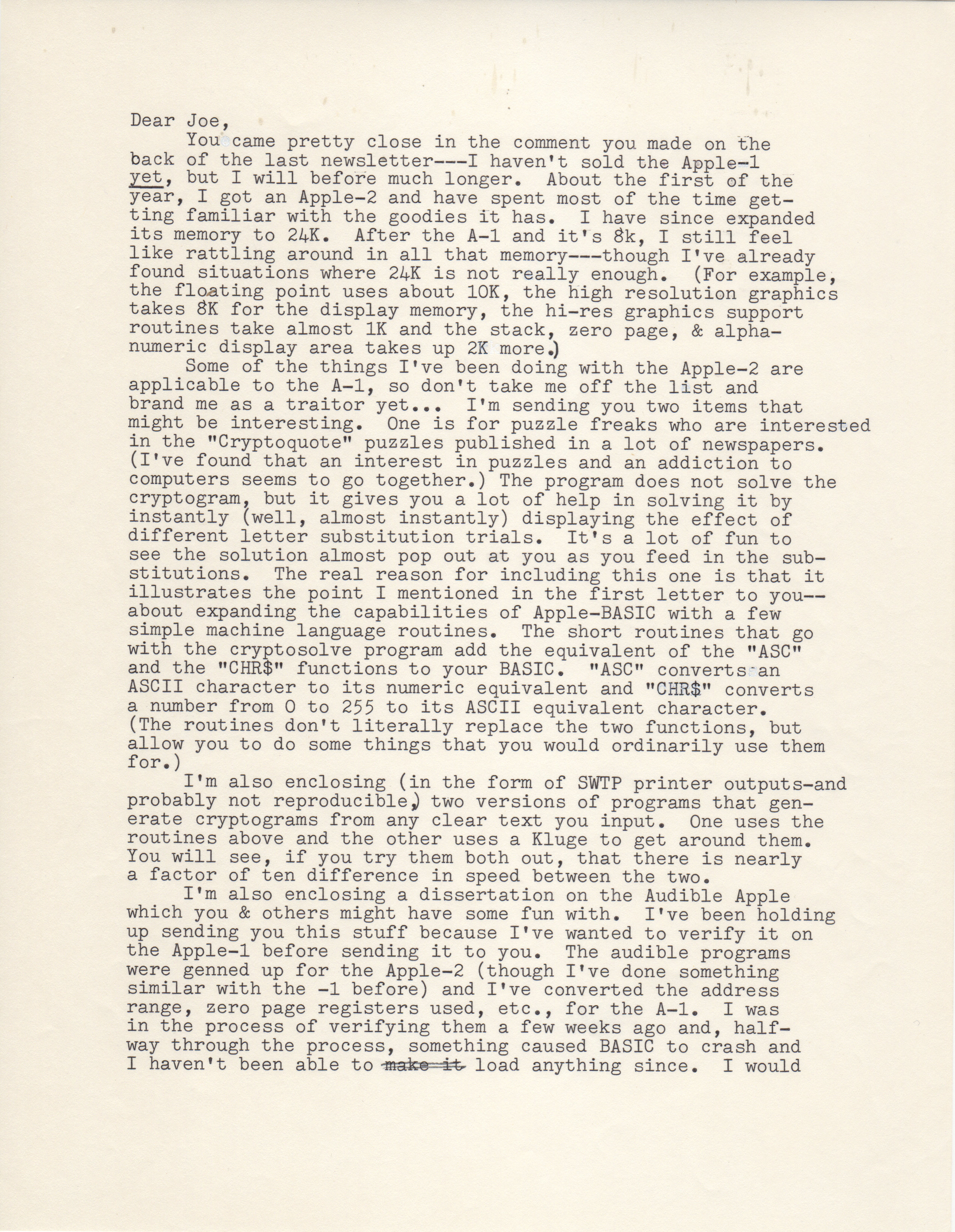 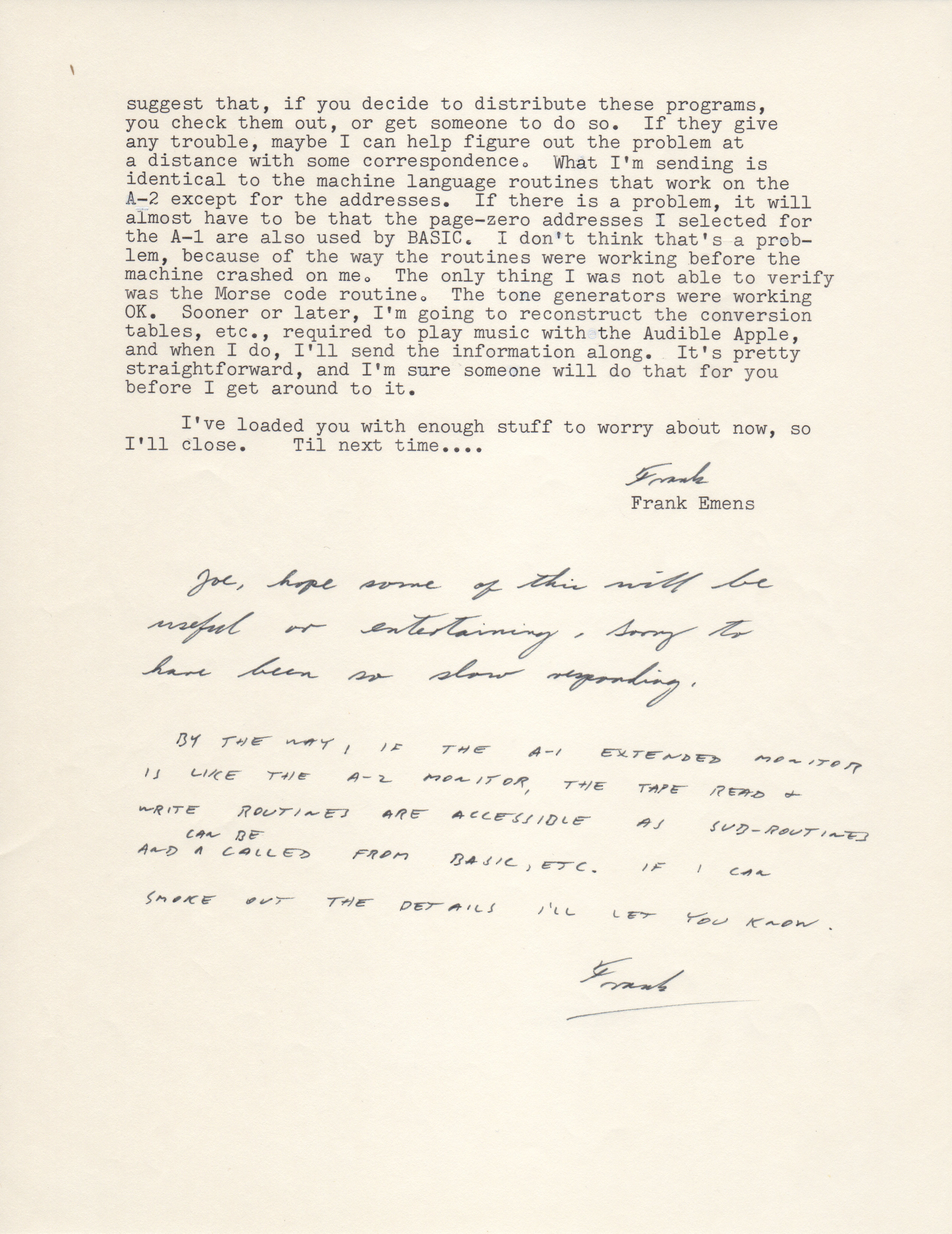 Dear Joe,
You came pretty close in the comment you made on the
back of the last newsletter---I haven't sold the Apple-1
yet, but I will before much longer.  About the first of the
year, I got an Apple-2 and have spent most of the time get-
ting familiar with the goodies it has.  I have since expanded
its memory to 24K.  After the A-1 and it's 8k, I still feel
like rattling around in all that memory---though I've already
found situations where 24K is not really enough.  (For example,
the floating point uses about 10K, the high resolution graphics
takes 8K for the display memory, the hi-res graphics support
routines take almost 1K and the stack, zero page, & alpha-
numeric display area takes up 2K more.)
Some of the things I've been doing with the Apple-2 are
applicable to the A-1, so don't take me off the list and
brand me a traitor yet...  I'm sending you two items that
might be interesting.  One is for puzzle freaks who are interested
in the "Cryptoquote" puzzles published in a lot of newspapers.
(I've found that an interest in puzzles and an addiciton to
computers seems to go together.)  The program does not solve the
cryptogram, but it gives you a lot of help in solving it by
instantly (well, almost instantly) displaying the effect of
different letter substitution trials.  It's a lot of fun to
see the solution almost pop out at you as you feed in the sub-
stitutions.  The real reason for including this one is that it
illustrates the point I mentioned in the first letter to you--
about expanding the capabilities of Apple-BASIC with a few
simple machine language routines.  The short routines that go
with the cryptosolve program add the equivalent of the "ASC"
and the "CH$" functions to your BASIC.  "ASC" converts an
ASCII character to its numeric equivalent and "CHR$" converts
a number from 0 to 255 to its ASCII equivalent character.
(The routines don't literally replace the two functions, but
allow you to do some things that you would ordinarily use them
for.)
I'm also enclosing (in the form of SWTP printer outputs-and
probably not reproducible.) two versions of programs that gen-
erate cryptograms from any clear text you input.  One uses the
routines above and the other uses a Kluge to get around them.
You will see, if you try them both out, that there is nearly
a factor of ten difference in speed between the two.
I'm also enclosing a dissertation on the Audible Apple
which you & others might have some fun with.  I've been holding
up sending you this stuff because I wanted to verify it on
the Apple-1 before sending it to you.  The audible programs
were genned up for the Apple-2 (thought I've done something
similar with the -1 before) and I've converted the address
range, zereo page registers uses, etc., for the A-1.  I was
in the process of verifying them a few weeks ago and, half-
way through the process, something caused BASIC to crash and
I haven't been able to load anything since.  I would

suggest that, if you decide to distribute these programs,
you check them out, or get someone to do so.  If they give
any trouble, maybe I can help figure out the problem at
a distance with some correspondence.  What I'm sending is
adentical to the machine language routines that work on the
A-2 except for the addresses.  If there is a problem, it will
almost have to be that the page-zero addresses I selected for
the A-1 are also used by BASIC.  I don't think that's a prob-
lem, because of the way the routines were working before the
machine crashed on me.  The only thing I was not able to verify
was the Morse code routine.  The tone generators were working
OK.  Sooner or later, I'm going to reconstruct the conversion
tables, etc., required to play music with the Audible Apple,
and when I do, I'll send the information along.  It's prety
straightforward, and I'm sure someone will do that for you
before I get around to it.

I've loaded you with enough stuff to worry about now, so
I'll close.    Til next time....

Joe, hope some of this will be
useful or entertaining, sorry to
have been so slow responding.

BY THE WAY, IF THE A-1 EXTENDED MONITOR
IS LIKE THE A-2 MONITOR, THE TAPE READ &
WRITE ROUTINES ARE ACCESSIBLE AS SUB-ROUTIENS
AND CAN BE CALLED FROM BASIC, ETC.  IF I CAN
SMOKE OUT THE DETAILS I'LL LET YOU KNOW.
Frank

Computer Type:
Apple I
Manufacturer:
Apple
‹ Example of how to run BASIC on an Apple I - with LOMEM up Cryptogram ›