Ever since the introduction of the new case design with the G4 models, iBook owners have lamented Apple's decision to switch back to an opaque plastic case (as opposed to the translucent-painted case in previous models, which allowed for numerous case mods such as the TronBook, featured on this site.)

The new case, as stated above, is an opaque white polycarbonate plastic. The real trick here is finding a paint that settles in and binds properly - what's more, you need to find a test surface to practice on. Where am I going to find a test surface that perfectly mimics the iBook case, one that I won't mind defacing? Well, it hit me - the AC adapter for my 20gig iPod is made of the same material, and in fact, is almost identical to the iBook's AC adapter (just a bit smaller.) So, I bought a can of Krylon Flourescent Pink (what other color could a pimp-book be!), making sure I picked a paint that will bind to plastics. Out of curiosity, I contacted the folks at Krylon, and they said the paint was untested on polycarbonate surfaces.. so, with that in mind, I broke new ground. 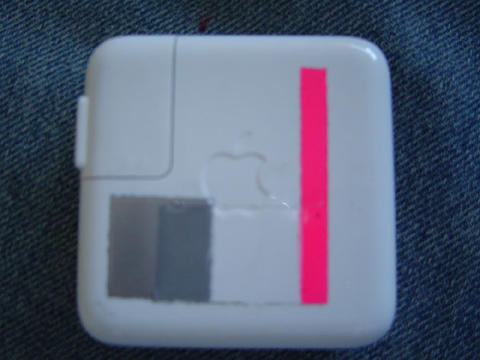 I also tested some spray-on chrome, and my "secret weapon" - Krylon Clear Acrylic finish (this bad boy was my best friend in my Spiderbook hack.) It might be a bit hard to tell from the picture, but the finished pink looked quite nice, and was extremely smooth to the touch, mimicking the bare iBook surface nicely. The chrome dulled a bit with the finish, but still sparkled in the light.

The case was then masked and painted. I put on one coat, allowed it to dry, and then added a second. Once the second coat dried, I applied my "ink", and then finished it off with two coats of the Krylon finish. 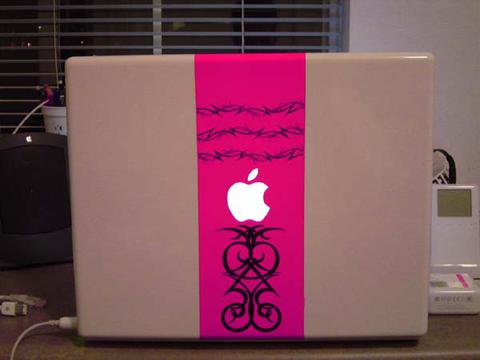 Voila. What's more, the paint glows an eerie flourescent orange under black light. Wicked. As a side note, although there are many finishes out there, I can't stress how well the Krylon worked - I'd strongly push for it if you're thinking of doing this yourself.

I might chrome the sides at another point.. if I do, I'll post an update. Measure twice, cut once, and have fun.

if you find a great metallic paint for this plastic, tell me as soon as possible. and let me know if theres a way to sand down the plastic if its damaged by goof off (all computer owners, never use this stuff to get gunk off ur computer unless you want to eat through a layer of the plastic).

I would say either Testor's M

I would say either Testor's Metallic Silver or Dupli-Color Chrome. You don't -need- to sand, but if you want, sand the surface lightly with a 220 grit sandpaper, and apply at least two coats of the paint. After the paint dries, finish it off with some sort of clear finish; there's a tradeoff here. The finish will protect the paint and make it feel more smooth to the touch and natural, but it might also dampen the luster of the silver a bit.

sqdwrd - google the subject for details

PC (polycarbonate) polishes nicely - bit of sanding, then polish and you'll never know what a mess it was before.

even if i use either of these techniques, wouldnt i still have to take off the cover and pop that apple logo? does the ibook g4 have much the same parts holding on the case as the g3? ive heard that it wont come off. ive heard it will. so, anyone whos taken the cover off of a g4 model, wont it come off or will it? my dad bought me this computer (though i paid several hundred too) and he wont let me customize it at all, though he doesnt care at all about the case as long as it works. he thinks that it will come off as i do. so tell me if its possible to remove the cover of the g4 if youve taken it off once or twice.

those last two adresses of yours cant be read by either of my search engines. :?

what kind of polish? car wax? or something more specific?

i also wanna know, will the new orinoco silver cards work on the wallstreet? my brother bent the dlink card on his dell when he dropped it and id rather hav the low profile orinoco card just in case i drop mt wallstreet.

any reccomended programs for installing panther on the wallstreet? im aware of wha ti have to do with te hardware.

well guess what happened to me taday. i put a cd in my ibook to import some music and it strips off half the top of the cd! this machine is defenitly going to apple, hopefully to be replaced with one with less hardware issues. i have no idea how this happened but i am enraged that the ibook wouldve done this after having no discs inserted after a month or two. anyone else suffered this with a 'book that has the slot-loading drives?

I have an iBook G4 and i have done a neat yet simple change to the glowing apple on the back of the screen, but what i wanna know is how i can get a spare cover (not sure what to call it, the part that covers the back of the screen) so if i mess up on the first one i can change it out or if i decide to have two different looks for my iBook. Where can i get these?

by the way, for the guy that wanted to know...the G4 is very easy to get in to. There are 4 screws around the sides that use a small allen wrench to get them off, then you have to carefully pry (and you can just use your hands for this, no need for tools) the cover off. you can probably figure out the rest from there. good luck to everyone and there mods!