So, I have a FloppyEmu. Some may remember: the one with the 3D-printed Disk II enclosure... :) Using the FloppyEmu is great - so convenient. But, I don't know about you: some days, even with the "noisy disk" adapter I just miss the original flair of using real disks. Anyone else occasionally needs the original "Brrrrt!" and spinning disk sounds, wants to flip disks - and enjoy the nice "Klonk!" when opening the drives? :)

My Apple IIe has a DuoDisk. Still works flawlessly. So do almost all my old disks (from a huge stash, there's only two, which got corrupted after all these years...).

For a while now, I've been plugging and swapping DuoDisk vs FloppyEmu cables. But it just wasn't convenient. Fiddling with the connectors at the rear of the machine... Of course, there is the "disk drive A/B switch" from BMOW. But it's not meant for DuoDisk: the adapter only switches one drive - but DuoDisk (and FloppyEmu) have two (which would cause a conflict). Also, the adapter provides a header for ribbon cables. This works with Disk II. But DuoDisk comes with a DB-19 cable. There is the  "daisy chainer" with DB-19 connectors. But it's neither meant for DuoDisk: no more than two 5,25" drives are supported in the drive chain (this is an original Apple limitation). And since DuoDisk already has two 5,25" drives, you cannot chain it with a FloppyEmu.

Unfortunately, it seems there are no schematics for DuoDisk. I couldn't find any. Well, they say, DuoDisk is just like two Disk IIs. But, "they" say a lot on the internet... :) So I better double-check. DuoDisk is not just two Disk II-like drives in a single, slim case. They squeezed all drive electronics for both drives into a single PCB. So, did they change behaviour? 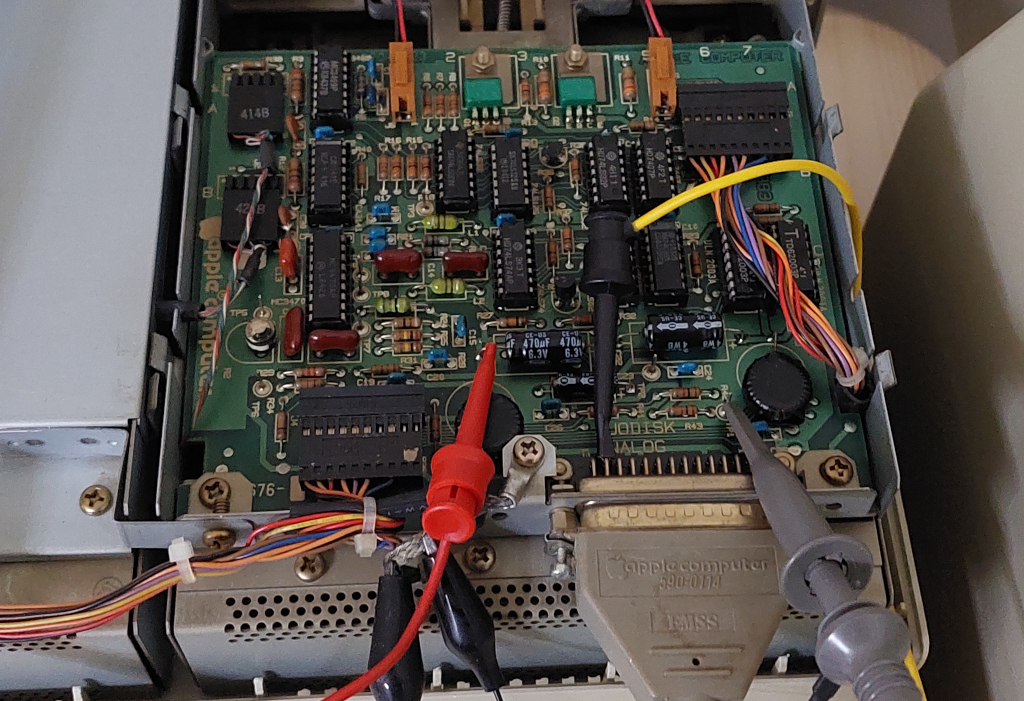 I "reverse engineered" the schematics for the disk output signals (simple enough, there are only two output signals anyway, data and write-protect - the Apple drive design was that simple). And I double-checked the behaviour with a scope. They shrunk the design into a single PCB, and only used a single line-driver IC for the outputs of both drives. But the behaviour is the same as for two Disk IIs indeed. Well, just as they say! :) The outputs are only ever driven, when either of the two disk select signals is active. All is good. Even with DuoDisk it's possible to switch drives just by switching the "drive select" signals as usual...

Next, about the connectors: DB-19 connectors are absoultely rare these days. In fact, BMOW Steve likely bought the world's last few female DB-19 connectors, which he needs for his daisy chainer. However, conveniently the DuoDisk itself uses a DB-25 connector. So, DuoDisks came with a DB-19 to DB-25 connector cable... And DB-25s are still super common and dirt cheap these days. Makes life so much easier... So, I decided to make an adapter intercepting the drive signals at the DuoDisk's DB-25 rear connector. It plugs right into DuoDisk - and also connects to the original DuoDisk cable. And it provides the header for the FloppyEmu ribbon cable. And it has switches, of course. 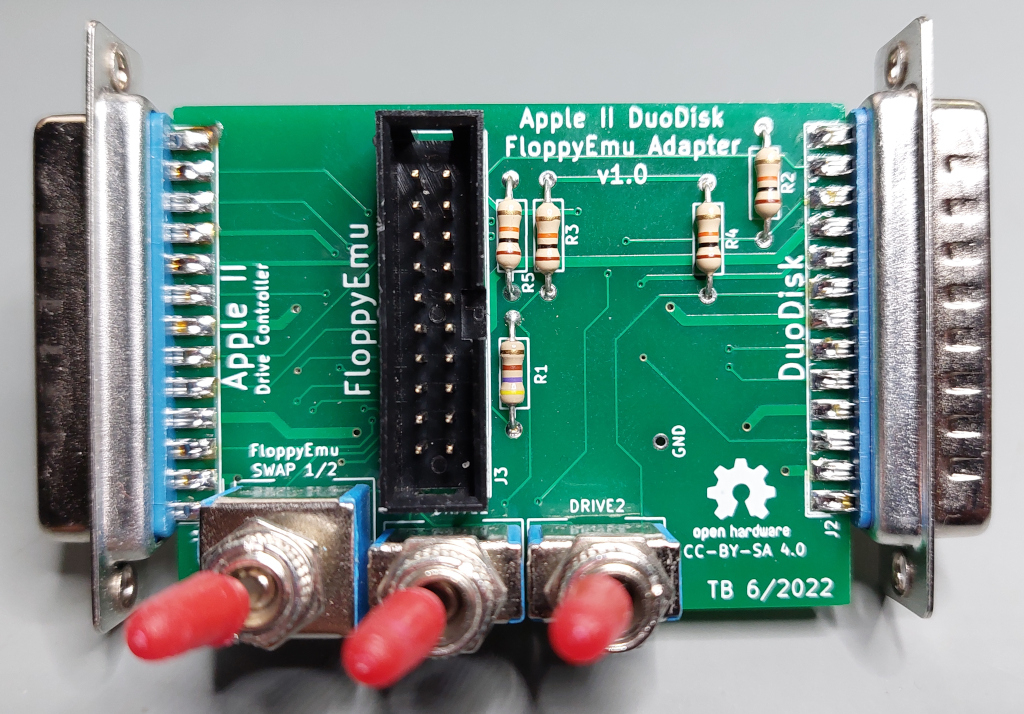 When installed, the switches are placed conveniently just above the Apple II power switch - which one needs to access anyway. So, I can now reach around my Apple II - to switch it on or off. Or to flip some switches and select my disk drive mapping: DuoDisk vs FloppyEmu - or any combination of both (to copy emulated disks to a real disk, or vice versa, etc).

This is how it looks once everything is installed: 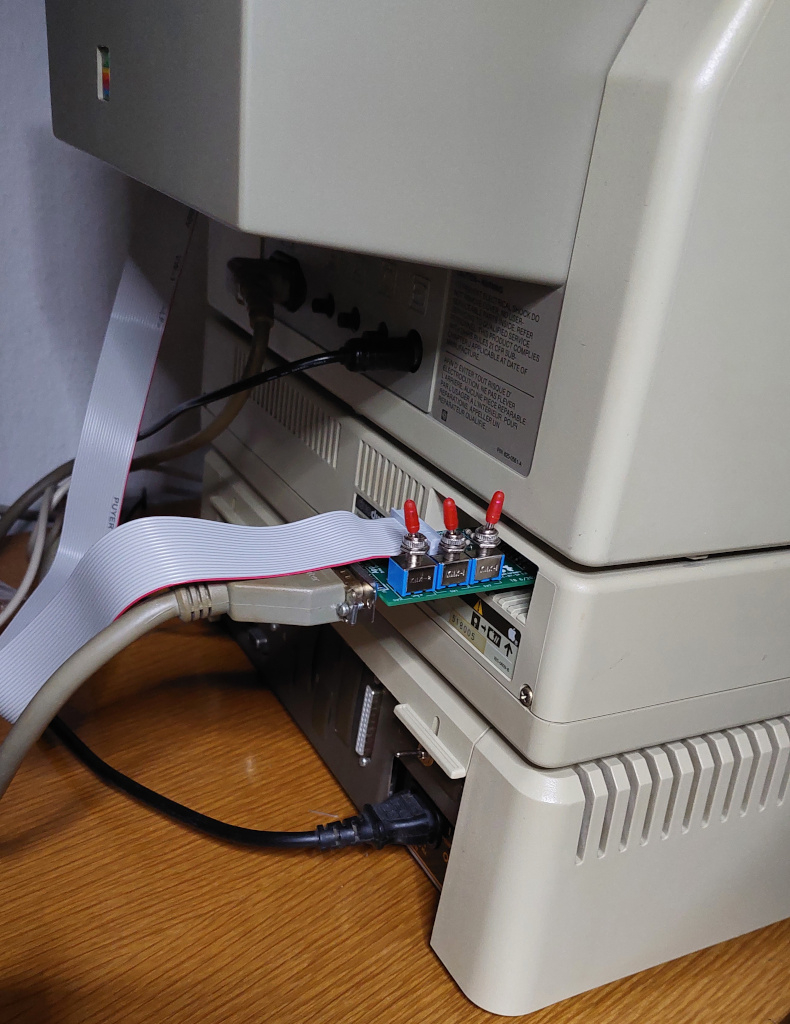 There are two switches - one to map drive 1 to DuoDisk or FloppyEmu drive 1. And one to switch drive 2.

Oh, and yes, and there is a third switch! That's an "advanced option"... Not really necessary, but I wanted it anyway: the third switch simply swaps drive 1+2 of FloppyEmu. I found this nice when you're using software which keeps asking to flip side 1 and 2 (and doesn't support a second drive). So, now I can just load both disk images in FloppyEmu drives 1+2 - and then simply flip the "swap switch" when necessary - no more need to fiddle with menus etc. The switch can make it a little confusing though - and it may be omitted, to simplify "end-user experience"... :) (a simple jumper may be soldered instead of the switch).

Well, that's it. Works great for me. Initially I thought I would maybe need to shorten the FloppyEmu ribbon cable, since the cable is now in series with the DuoDisk cable (added cable lengths). But I did not have any issues with the longer connection so far (like corrupted data etc), so for now, I just keep it at original length.

If anyone else had a DuoDisk and FloppyEmu and was interested: all files are in GitHub (KiCad, Gerber, shopping list, ...): 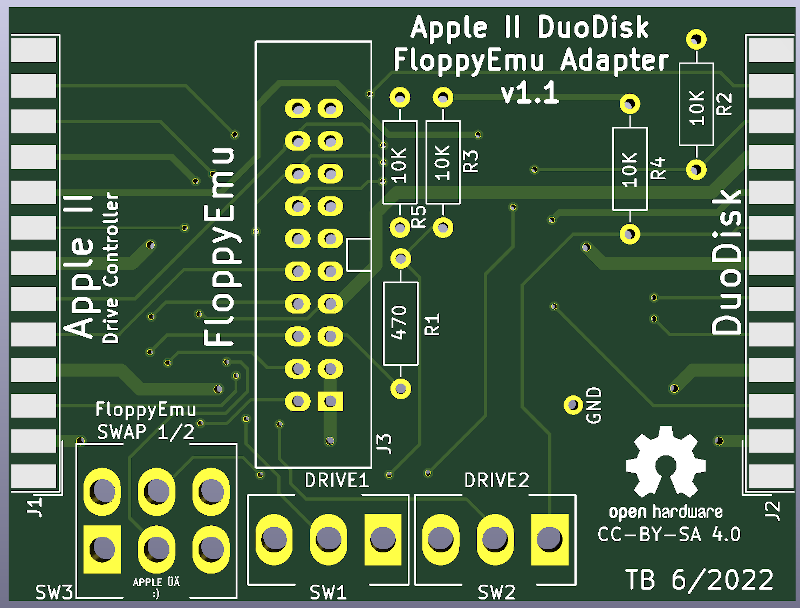 It's all simple and really common components. Just a few bucks/Euros/... worth.

I also have a handful of PCBs (and switches/connectors) left. So, if anyone was *really* interested, I have a few to spare. I am in Europe/Germany though. Postage for overseas might be more than the PCB is worth...

That's great, thanks for sharing this! I'm in the same boat, I occasionally got nostalgic for the sound of a real drive and use my DuoDisk instead of my FE. I may have to check into building one of these.