There has been a lot of discussion in this forum about the pros and cons of building Apple-1 clones based on the Open Source Gerbers, see this thread:

Yesterday I started to build another one based on such a cheap PCB made by JLCPCB.And I found this: 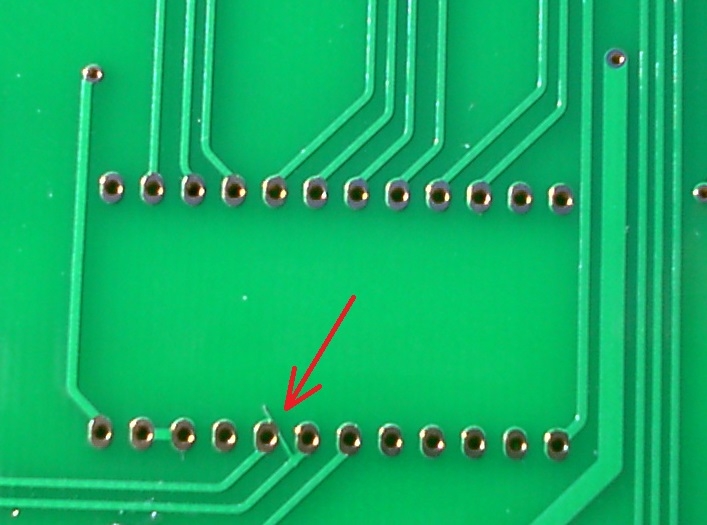 The red arrow points to a fault in the PCB, which is a short, as verified with an ohmmeter. The other little specks are just dust, as this PCB was living in my lab for weeks.

It's the first time I found a bad Apple-1 PCB but so far I only built four clones based on these cheap PCBs. For all my other builds I used Newton PCBs, which are of a much higher quality and also have good gold fingers on the edge connector. So far I never found a flaw in any of these Newton PCBs. They are worth the extra money. I was told that MIMEO PCBs - which are the most expensive - are 100% electrically tested for opens and shorts.

The takeaway from this is that if you are a cheapskate and if you decide to use one of these cheap PCBs, it is imperative that you inspect them carefully, and thoroughly, for any faults, before you solder any parts in. Because once parts have been soldered in, they may hide such faults below them, which of course applies to the component side of the PCB only. It is almost impossible to find such a fault once it is hidden by a component. But even on the solder side it's better to find and remove such faults before anything is soldered in. Once there is solder, it is harder to spot bridges / shorts near solder eyes, just because solder joints are shiny and this may distract and confuse any observer.

I inspect all of these cheap PCBs and it takes me 15 minutes to do a thorough inspection, looking, using a magnifier headband, under good lighting conditions at every trace and every through hole in a systematic way. With 100% electrically tested PCBs this tedium and eye strain is not necessary. The industry avoids to use untested PCBs for a reason.

But you get what you pay for. This particular PCBs is from a lot of five which was made with the ENIG process, since I intend to use the edge connector on them for lab work and experimental purposes and do not want contact issues which according to my experience are inevitable if the contact fingers have only HASL finish (solder surface, not Nickel/Gold = ENIG). Cost per PCB including shipping was an astonishing $29. Unbelievable they can do that, even for China. (Again, beware of the price gougers on Ebay who sell similar PCBs for prices approaching the Newton PCBs).

So if I would make $400 per hour, which is not exactly minimum wage, this would approximately be the threshold where buying the cheaper PCB would not make any economical sense to me anymore. Of course, there are other factors at play, too, and your mileage may vary. For a "keeper" Apple-1 clone I would only use the higher quality PCBs anyways. But for a "lab rat" to be experimented with, those are just too valuable. And the sad part of the story is that the availability of the "cheap" PCBs discourages the purveyors of the higher quality ones and so the better ones may become unavailable.

Same issue as with almost all other products. It is almost impossible now to buy good tools, for instance. Even the brand names mostly are Made-in-China junk nowadays, but of course, not at a junk price at Harbour Fright level (pun intended).

I just threw out one of their little "hot dog" air compressors which worked for less than 10 hours before its motor died and blew the fuse. Warranty over, of course. Price almost the same as this cheap PCB mentioned above. At this cheap price it is even more unbelievable that this compressor had a real electric motor with real copper windings inside, and a real air tank, and all the fittings / connectors, and real electical wires. Lasted less than 10 hours, for sure, and now is in a landfill.

From the standpoint of ressources and environment, it's madness. But somehow it must make economical sense, at least to the bean counters, to produce such junk and ship it around half of the globe, just to be used a few times, and then get thrown away. I'm waiting for the truly cheap Made-in-China cars, the "one-way" type, to be abandoned at the destination, if the destination is ever reached without towing it. They already make one-way scooters with a gas engine that lasts only a few hours. Making one-way cars only is the next "logical" step. /sarc

UncleBernie, that looks intentional.... Looks like the line was added to the vector table before the board was made.  Looks like an added vector to me.

If you ordered a slew of these, you might want to check the Gerber files to make sure it didn't go out that way.  I get your point with ordering the cheap stuff, but it's in their best interest to supply a good product, else their own equipment investments would be in vain.

BTW, $400/hr is more than most law degree folks earn.  I would never volunteer my earnings for frepairing or building a reproduction board.  I doubt most would, unless they earn (say) 500/hr, LOL!

Remember when we used to say that about Japaneese made goods back in the early 1960's?  You sure wouldn't say that today.  :)

... as I have several of these PCBs from the same batch and so far did not find any other fault on any of those.

As for the $400/hr, I never got that as a IC design engineer, even not when I worked freelance in the wild 1980s where IC design was still a mystery for many. These were the days ... CMOS gate array vendors promising the moon and furnishing crappy in-house CAD tools to unsuspecting customers which were supposed to glue together "their" design from "TTL" gates which don't exist in CMOS and the ugly truth is that almost none of these gate arrays did work. And then I came to the rescue ... and could collect very very good hourly rates ... to save their project or even their whole company. And my designs did work. And were properly breadboarded and plugged into the target system prototype. Just to find out that more often than not there were holes in the specifications and it would not work in the target system despite of the spec having been implemented 100% perfectly and error free. So, edit the breadboard. Collect even more money because not my fault, customer's own fault. Purchasing power wise I would need to earn $800/hr or so nowadays, to have the same purchasing power per hour as back in these days. That fiat paper "money" is all but a blatant fraud. The good times are over. Now we have $9/hr "engineers" writing "code" and "designing" ICs in places like India, and then airliners using such cheap work fall out of the sky and the whole fleet is grounded worldwide for more than a year. You get what you pay for ... and some "manager" dude nevertheless got a fat promotion for reducing development costs.

The Chinese are different from the Japanese and hence, very unlikely to ever reach the quality level and perfection the Japanese industry was able to achieve. The Japanese regarded their shoddy 1950s and 1960s products as an embarrassment and were willing to work very hard to learn and to improve them until they were world class. The Chinese culture is different. "Cheating the customer" is "winning" for them. Make it cheaper, a win.  Make it even more cheaper, more "win". Substitute crappy materials for good materials, even more "winning" ! Lie, swindle, deceive and defraud the "long noses" (us), the whole Chinese nation is "winning" !  Just read Sun Tsu "The Art of War". This is their mindset. Chinese children learn all these tricks and ruses in school. Unless you have your own quality control people 24/7 on every manufacturing floor in China, you will get cheated. But if your quality control people do their job, even the Chinese are able to produce top quality (although at a higher price). If your quality control people don't do their job, such as leaving the manufacturing floor unobserved, the reels with the high quality electronic components quickly get swapped against the lookalike crappy components, and the good ones are being sold for a profit, all behind your back. If you are lucky you  can later buy your own good parts back at alibaba.