Previously I remember (but couldn't easily locate) a discussion on this board about using LCD monitors with composite inputs for use with the Apple ]['s.  I think Tom Owad made the comment that due to Woz's tricks to get the video out, the results weren't quite up to standards of NTSC and so many LCD TV's with composite inputs had difficulties displaying this signal (with vertical hold, IIRC).Well I have come across two LCD TV's that seem to work very well with a ][e's video output and I thought I'd share.

The first model is  an institutional grade TV from Zenith-LG.  Made in 2008 it has a big screen, holds the video signal in a steady, very clear manner.  It's also heavy for it's size, but has a VESA mounting layout, and offers some future proofing features like an HDMI in port, and both analog and digital broadcast TV reception.  The other downside is that due to the fact that it is meant for institutional use, it's default settings are for not allowing the user to modify the inputs.  It requires a special technician remote control and some jiggery-pokery to change the settings to work (at least for me from the hospital where it came from).  However, because it's institutional grade, I expect it to last a long time. I think that it's pretty tough.  The manual is available online, and if anyone wants specific instructions on how to most easily set it up for use with an Apple ][, PM me.

BTW, in the images below you may notice a large black border around the video displayed.  The monitor does have different ratio settings for display (even with composite input).  I did have it on the smallest viewable area.  I'm not sure but I think it might cut-off some of the screen output and would have needed further adjustment to bring the edges back on screen.  This machine is highly adjustable/programmable.Note the dual voltage input and the low-ish 68 Watts of power consumption.  So this model is suitable for use in international markets. 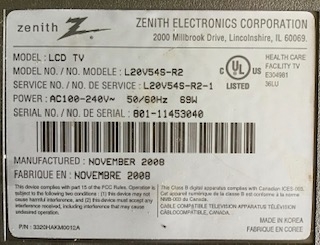 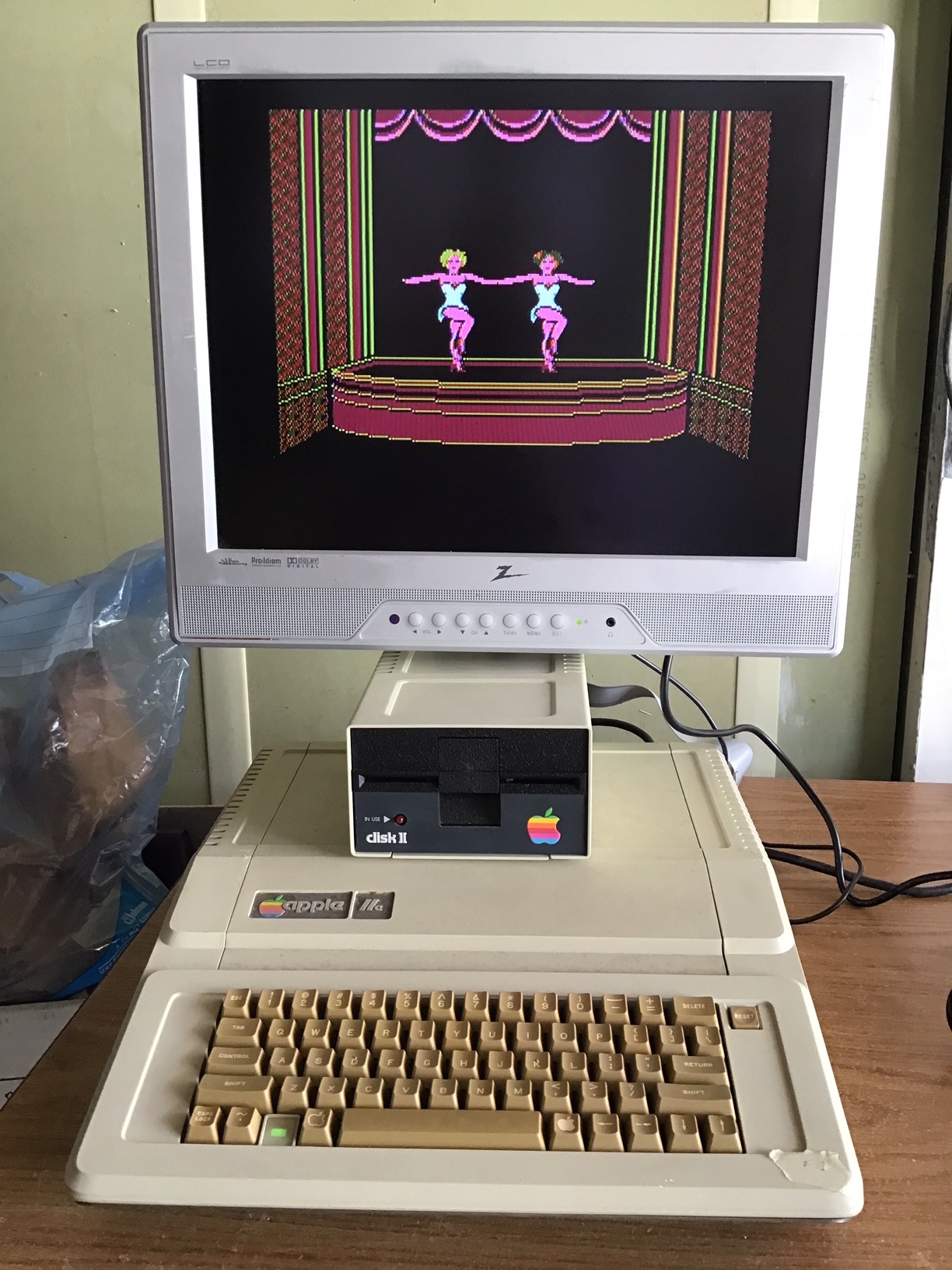 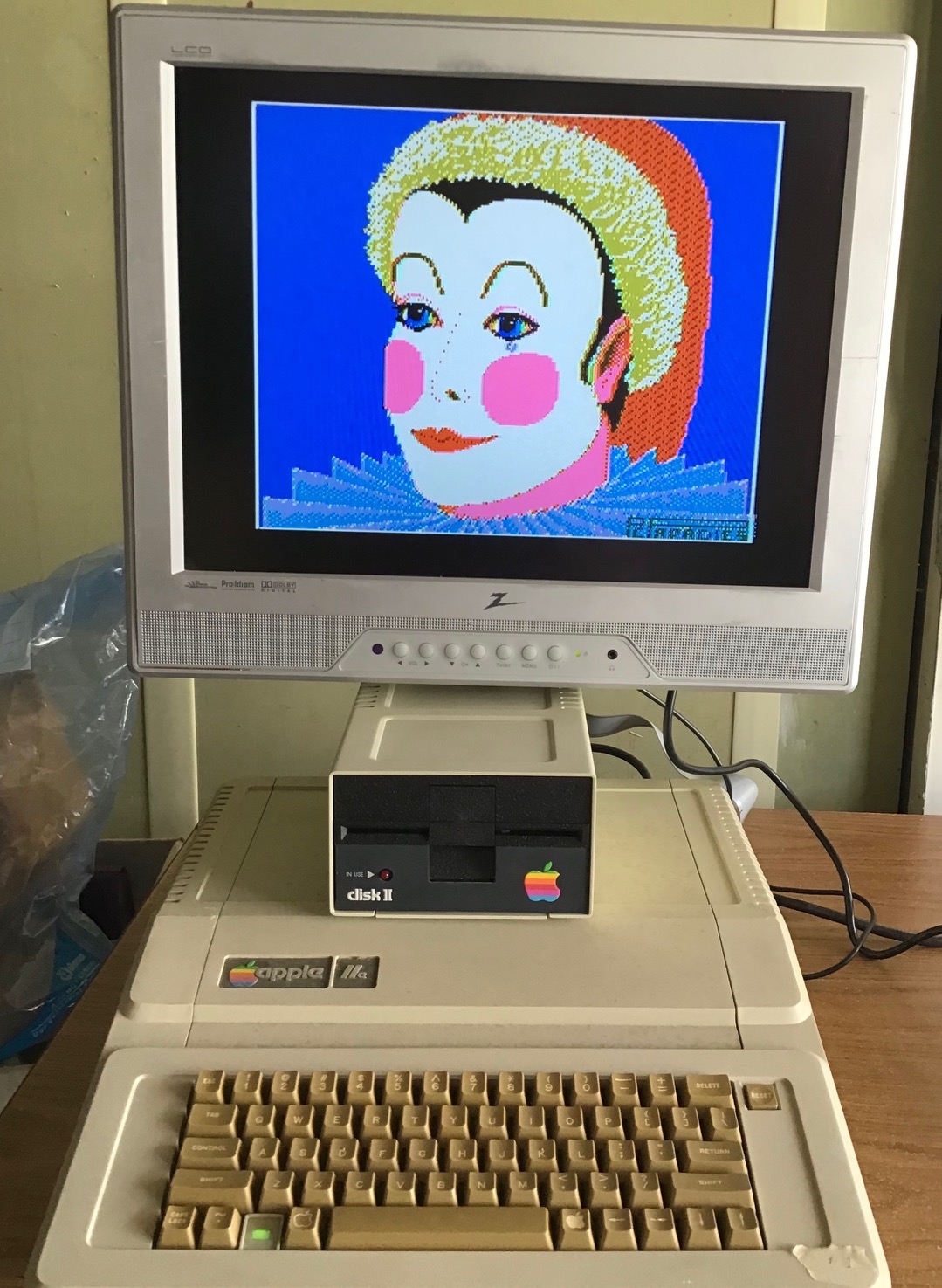 The second entry in this category is a consumer grade model from Samsung.  I'm not surpised that an industrial grade TV and a Samsung model are among those that provide a good picture, despite a semi-hinky signal.  I've learned to trust certain brands for their higher quality and durability, and Samsung tends to be up there.  This monitor is a little smaller than the one above, requires an external power supply (unlike the Zenith), but is easily half the weight or less and came with it's own built-in stand.  Again, the image is good, though a little adustment to bring up the brightness and adjust the contrast were in order.  This model does not have an HDMI input, but does have an S-video and VGA inputs and I need to find and check the manual for it's highest resolution.  It's broadcast receiver seems to accept just analog signals, but I'm not sure.  Still, it seems that it's absolutely functional (I need to double check the 80 column text output though it seems very sharp).

Coming in at just 36 Watts of power consumption at 12 volts, I can imagine making a battery pack for this thing. 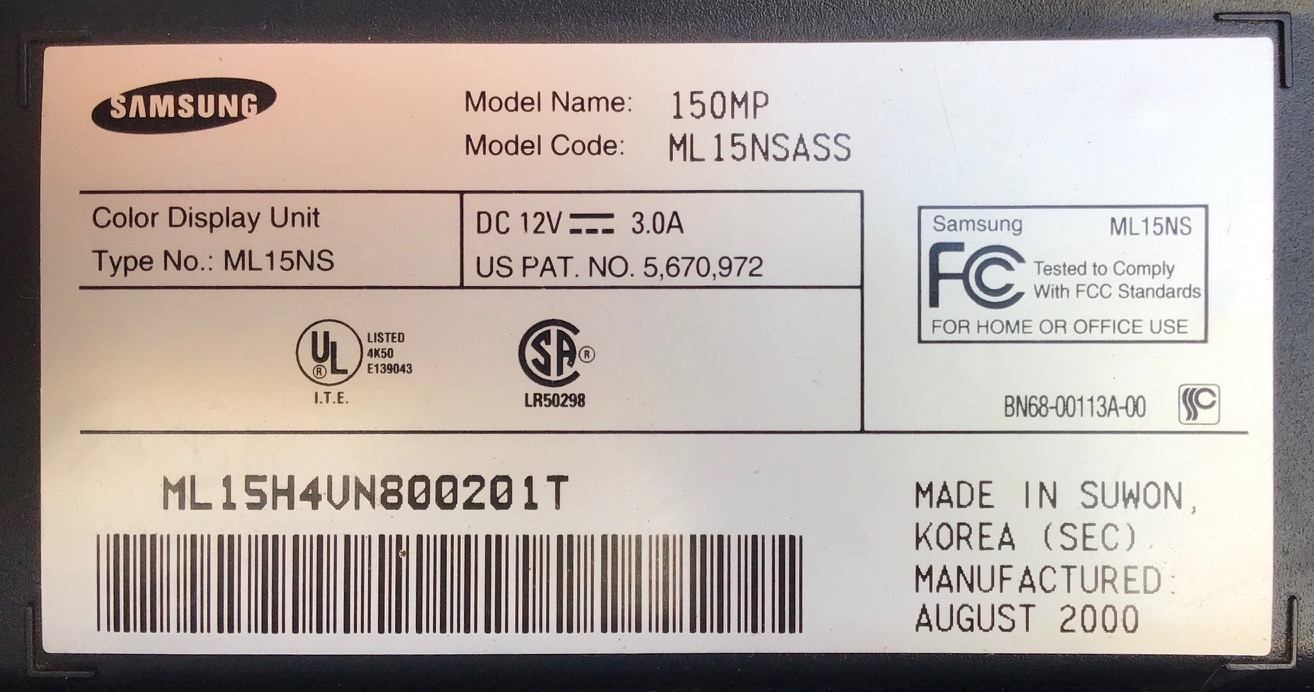 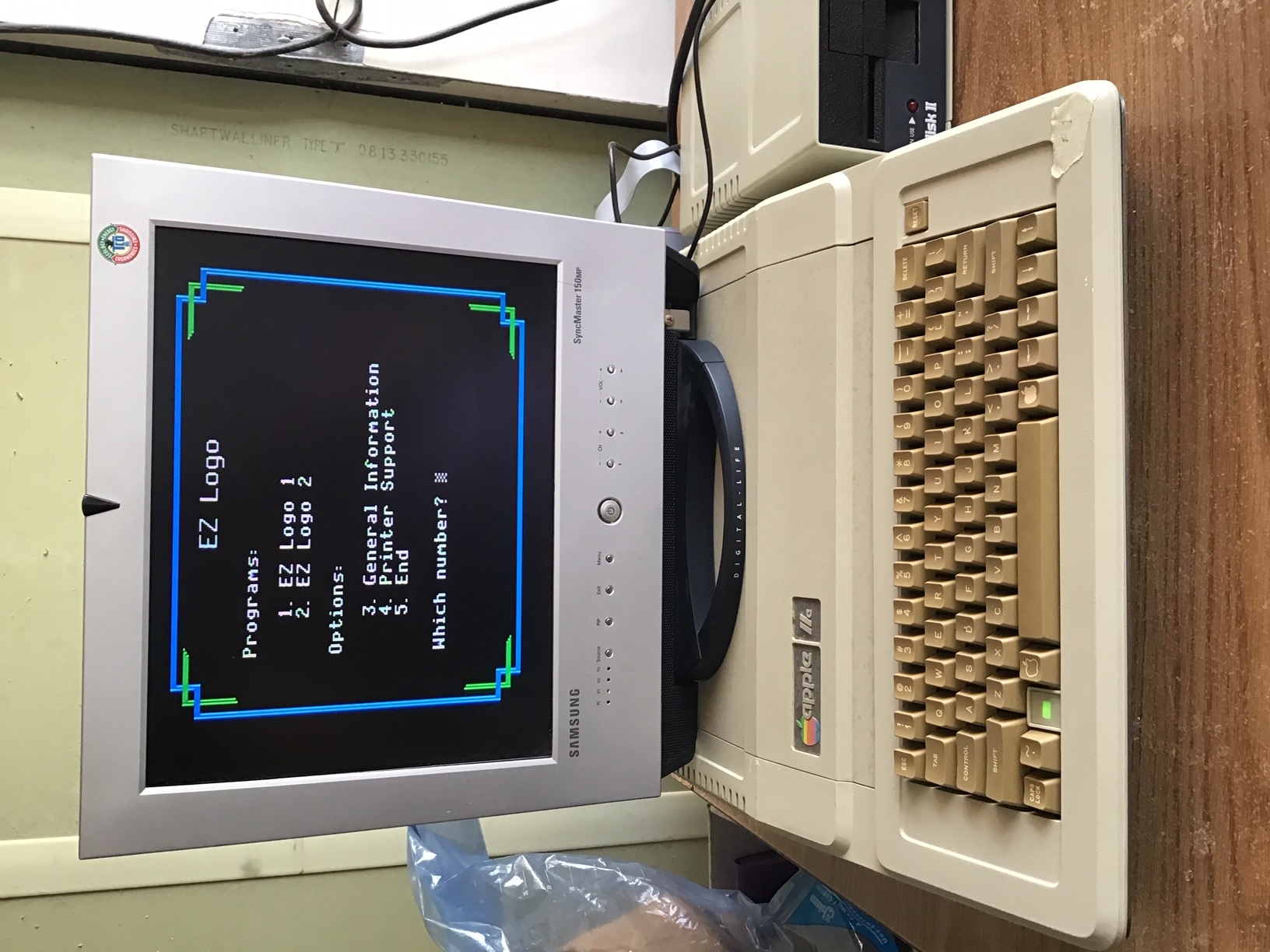 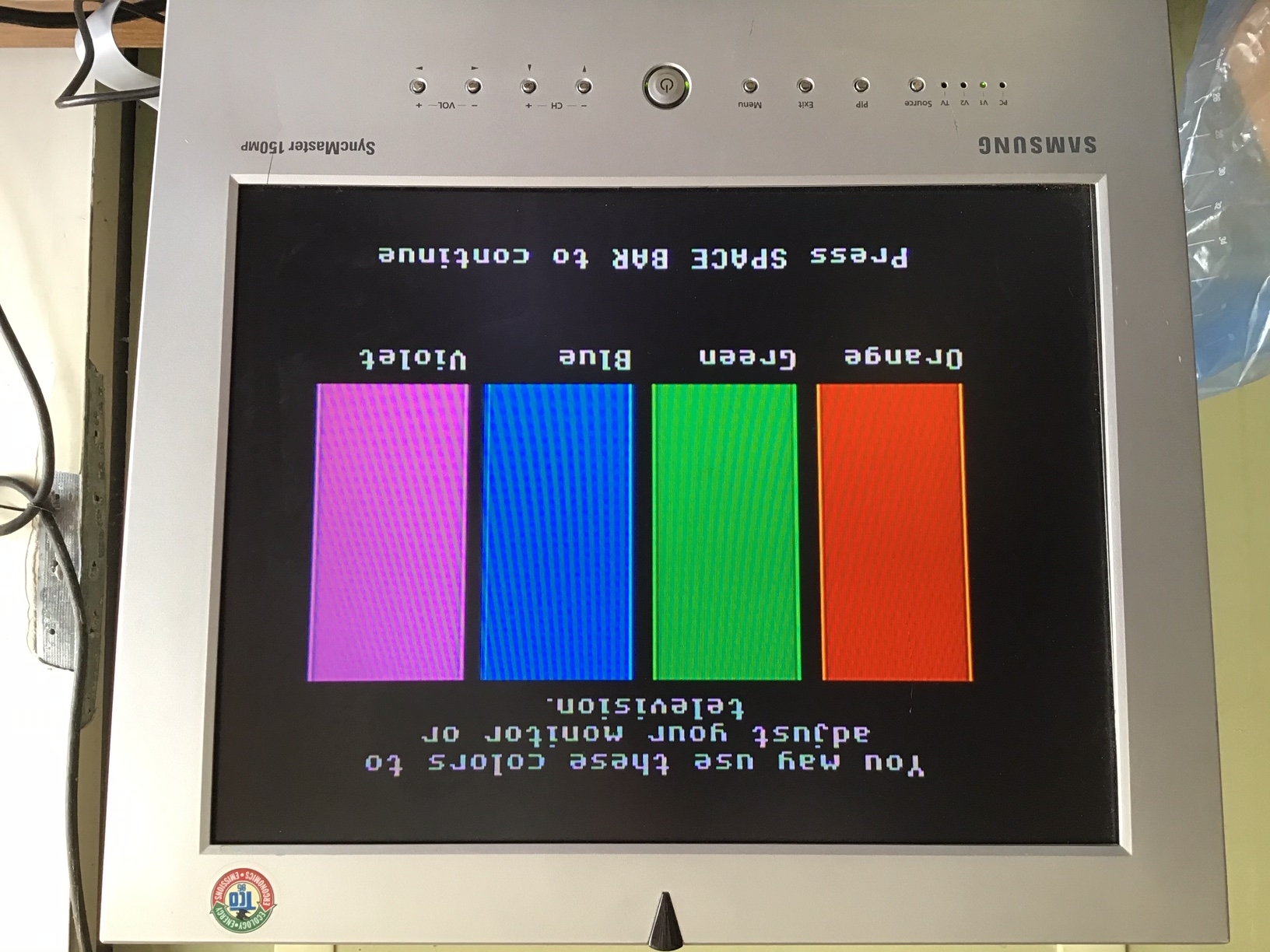 Corey had posted about an insignia 19" lcd that he discovered worked well with the apple I video. I've found his recommended unit works nicely with both the Apple I and Apple ii video output. Bought a second one a few months ago.

The elegant and minimalistic video circuit design of the Apple I and Apple II worked well with period correct TVs and Monitors but may cause trouble with many contemporary TVs/Monitors, regardless whether CRT or LCD. There are two distinct groups of problems and root causes:

Typical symptom is a moving or wobbly or static curve-shaped displacement of TV line beginnings in the upper quarter or so of the screen.

Root cause is lack of serrated VSYNC in the Apple I. So during VSYNC there are no pulses which could keep the horizontal oscillator (or its digital equivalent) in the TV synchronized. It runs away and needs to re-acquire frequency and phase. This acquisition process is what you see. I am quite angry on this as the little B&W TV I bought just for my Apple I clone does not work at all with it. I don't know if the Apple II has the same problem as I never tried one with a TV. Also, my Apple I clone build has a HSYNC pulse that is almost twice as wide as in the standard. Could  be a bad IC. But my request on the site for somebody measuring the HSYNC width on his Apple I never was answered.

Remedy: if we find a spare 2 input XOR gate, combine HSYNC and VSYNC with it, and the problem is gone. (Can't fix a HSYNC too wide, though).

The NTSC standard requires a 180 deg phase shift of the color subcarrier for every other TV line. Otherwise a block of the same color would have vertical stripes in B&W TVs. The goal of the NTSC comitee was to avoid such artefacts on B&W TVs, hence, the requirement for the alternating subcarrier phases between the TV lines. This causes a block of the same color to have a dot pattern on B&W TV which the human eye perceives as a grey area with no perceptible line features. Mission accomplished.

Root cause of the problem with Apple II color  decoding on modern TVs is Woz' genius to turn this idea of the NTSC commitee upside down: if there are no 180 deg phase shifts of the color subcarrier for every other TV line, any vertical line drawn at a dot clock of twice the color subcarrier frequency will assume a uniform, nice color from the top of the line to the end of the line. You can make two colors with that, besides black and white, while having absolutely no color coder circuit in the computer.  IIRC, this idea was so genius that Woz even got a U.S. patent on it. Latter the previously unused 8th bit of a video byte added a selectable further 0 or 90 degree phase shift to allow four colors besides black and white. Note that black and white do no qualify as "colors" in the strict sense.

Now, most modern digital color demodulators / decoders for NTSC signals use a thing called a "comb filter".  Which is based on the presumption the 180 deg phase shift is there between two adjacent lines. This nicely suppresses the unwanted color subcarrier but fails miserably if the phase shift is not there.

The takeaway from this is: if in doubt about suitability of any more modern TV / Monitor for Apple II color graphics, look for the mention of a "comb filter" in the technical specs of the equipment in question. Stay away from those who do.