I have seen plenty of the 16k blocks, and even a rare 4k, does any one have any other kinds? I have one that is 16k 4k 4k. Can I use these with all 4116 ram chips? Sorry if this is obvious, but I have only every had the 16k memory select blocks.

I have seen plenty of the 16k blocks, and even a rare 4k, does any one have any other kinds? I have one that is 16k 4k 4k. Can I use these with all 4116 ram chips? Sorry if this is obvious, but I have only every had the 16k memory select blocks.

What kind of Memory is in the Bank Selected with this Block????

Memory on Apple II's mother boards, with the configurable memory blocks, can be configured on a per bank basis to 16K or 4K, with, if I remember right, one of the 24K combinations not working correctly. A 16/4/4 jumper would expect 16K DRAMs in the first bank and 4K DRAMs in the other two banks.

Most early Apple II purchasers bought a 4K system and bought aftermarket 16K memory and made their own jumper blocks - there are instructions in the Red Book. Once the difference in price between 4K and 16K chips was low enough, people no longer bought 4K systems and Apple installed 16/16/16 memory blocks in 16K, 32K and 48K systems. This is why 'factory' jumpers other than 16/16/16 are rare. For a number of years, because I originally couldn't afford 3 banks of 16K DRAM memory, my Apple II had 36K of memory installed. I made my own 16/16/4 memory blocks for this purpose.

Another unique configuration was a 24K system
that was populated with TI 4108 8K RAM chips.
This of course used custom jumper blocks.
As Mike had previously stated users would start
with a 4K system then populate the rest of the
board with whatever they could afford / acquire.
(Even if it meant borrowing from S-100 boards.)

To ensure there is no confusion, if you have a 16k-4k-4k blocks, the system will expect 4116 chips in the first row (closest to keyboard) and 4k (or no) chips in the other two rows.

Someone with a stronger hardware background would need to advise on what would happen if 4116 chips were inserted in the 2nd/3rd rows. At best the system might recognize an additional 8k of RAM.

Why were 16-4-4 blocks used in the early days ?
As alluded to by another responder, the cost of memory was a significant. As I recall, a row of 16K chips cost about $1,200, about the same as the cost of the basic Apple II.

Most "experts" at the time believed that a hobbyist would not need more than 4K to 12K for programs. With Integer Basic in ROM, 4k-4k-4k blocks were sufficient for most.

However, those wanting to run Applesoft Basic needed about 10K RAM to load it. To have space left to load user programs, they needed a row of 16k chips. Using 4K chips in the remaining rows would provide total user memory of about 14k using Applesoft, more than that available with base machine using Integer Basic.

Given cost considerations, it was felt more likely that most users would upgrade the last two rows with 4k chips.

I believe that is why the factory was shipping with the 16-4-4 blocks.

When I decided I ordered a machine with 16k memory the shop owner tried to convince me that a hobbyist would never need more than about 8k. In fairness, this was the second Apple II he was ordering and he was not aware only integer to allow for loading the 12k needed for Applesoft Basic from cassette,

Looking at the original ][ User Manual, I see several refs to the RAM jumper blocks, and I have the addendum that came with one of my ][+ systems regarding them being removed from the RFI boards, but I do not see a description of how to hand make one. I have a Rev 4 board that has a hand made umper block, but it was sent to me as a DOA donation, and I'm unsure if it is correct, or in the correct orientation. (It was hanging in the socket by half of its pins, misaligned, and unindexed, on arrival.)

If anyone recalls where the procedure to make the 16K ram plug / umper block was explained and ilustrated, please LMK. In the interim, I will go through my old books and notes to see if I can find anything, as I had always used factory jumper blocks. 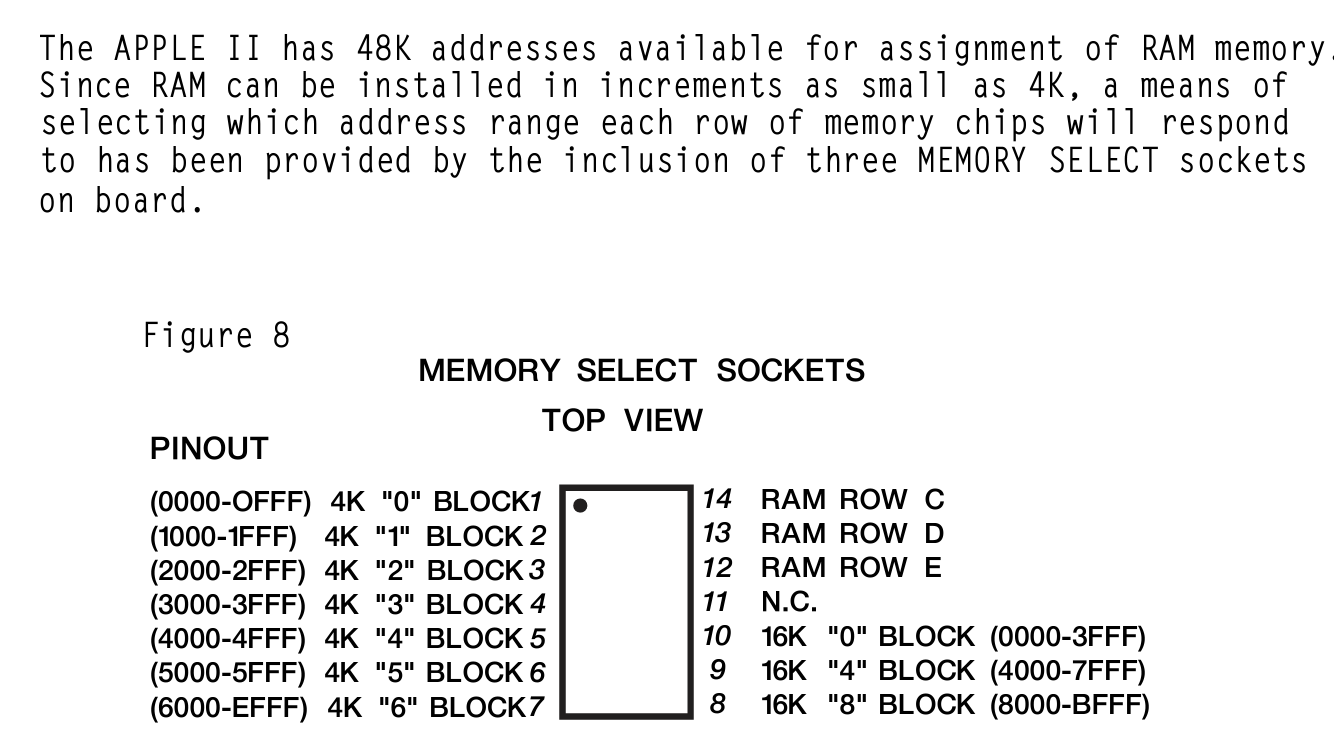 The wiring of the jumper blocks is in the Red Book -

so for 16K memory select blocks -