I've managed to get my Franklin to the point where it can boot off of the FloppyEmu (which required modification of the video circuit; I'll write that up at some point).  Now it's time to get all of the peripheral cards working.

Before I started experimenting, I thought it would be a good idea to ask if  anyone knows how to wire this board up.

Picture of the board: 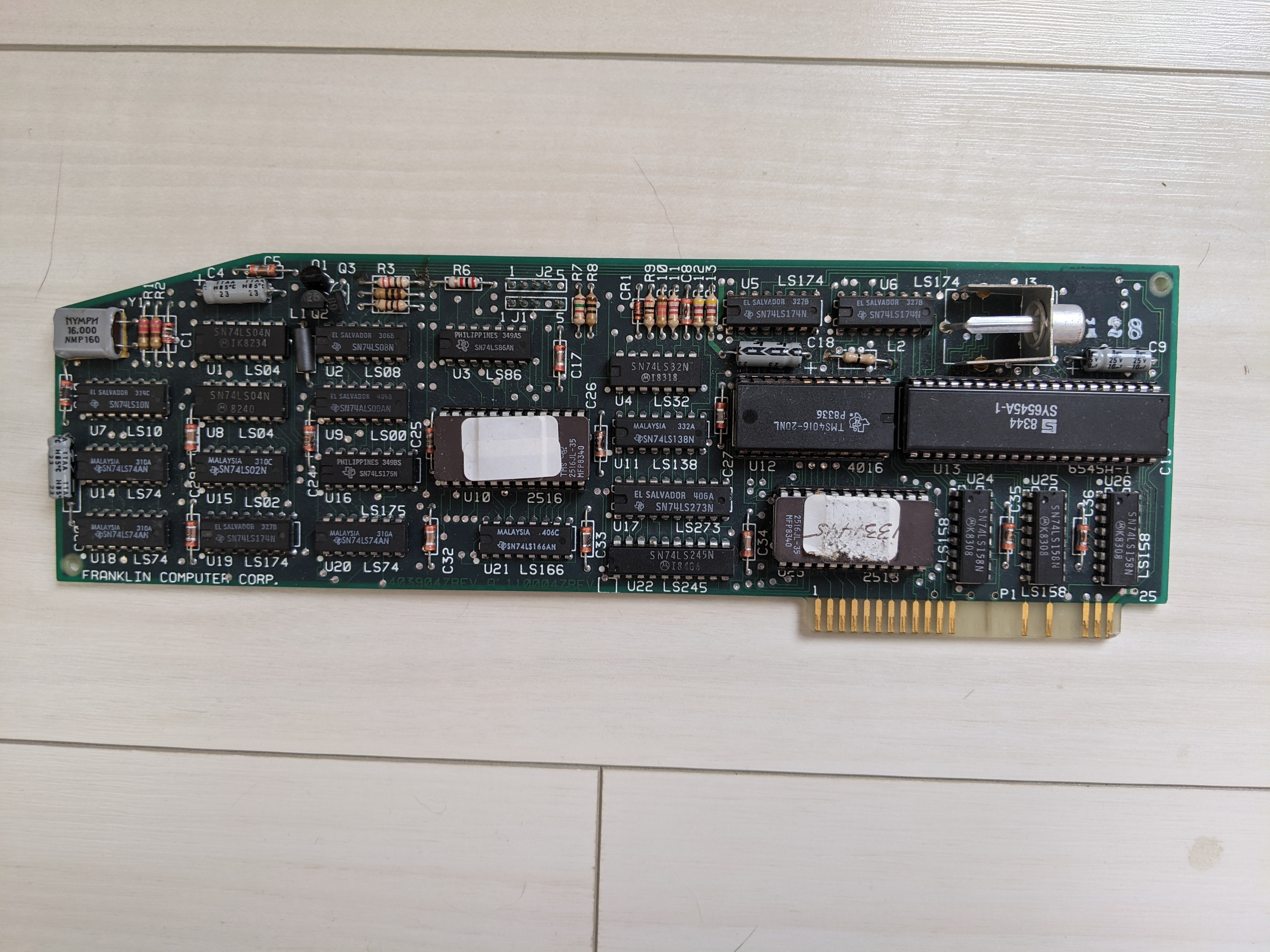 Which Franklin model and mainboard do you have? I have a 1200 model , but its card does have a header wire going to the mainboard. I can probably take photos of how to wire it up, but I have no seen an Ace 80c card w.o any wiring reqs. Perhaps this just predates internal softswitching and you need a hard A/B RCA switch to use it?

I note that J1 and J2 are n/c on your card, so if those are where the wires normally go, perhaps they were removed? I do not recall just by sight, I need to look at my cards to confirm.

You may want to test if PR#3 activates the card and you get an 80c signal ere bothering further, first. Connect the RCA output to any monitor with 80c capabilities., do PR#3, and see if the card activates and the signal shifts to the other monitor; or use an RCA video selection box and one monitor, whatever is easier for you. If not, then how to wire it is the least of your worries.

P.S. This card MUST be in slot 3 for any software designed for 80c to work properly. If your Franklin has a Z80, then you can also boot CP/M and it will automatically activate the card.

I've got an ACE 1000 with the mono mainboard.  That's the pretty-much-exact-copy-of-the-II+ board, modulo bad craziness in the video circuit that FloppyEmu doesn't like, no on-board disk controller.

J1 and J2 are actually populated with pin headers -- I guess the angle I took the picture from made it look like there wasn't anything there.  There would be header wires from one of those two jacks to the mainboard; I just don't know which one of the two and the proper pin mapping.

PR#3 does activate it.  No output on the monitor, but I can see ~1.5V pulses on the RCA jack output when I hook it up to the oscilloscope.  I suspect it'll be okay once I know how to connect it to the mainboard.

We can try an assumption: That this card has similar functionality to the Videx Videoterm.

That said, look around the pin headers and see if you can find a voltage divider  like the one in the Videx schematic segment.  Pin 2 is for 80 column out in this segment. 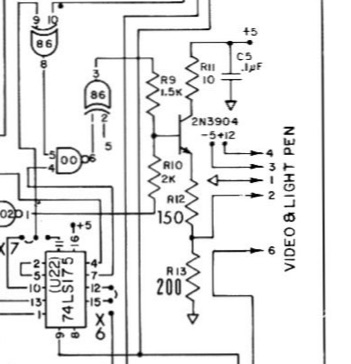 This card could also have a soft switch aboard.  I have a Videx clone with a soft switch on board (rather than outboard which is how Videx themselves did it)

If your card has a soft switch (I suspect it does) then it should have a similar circuit. 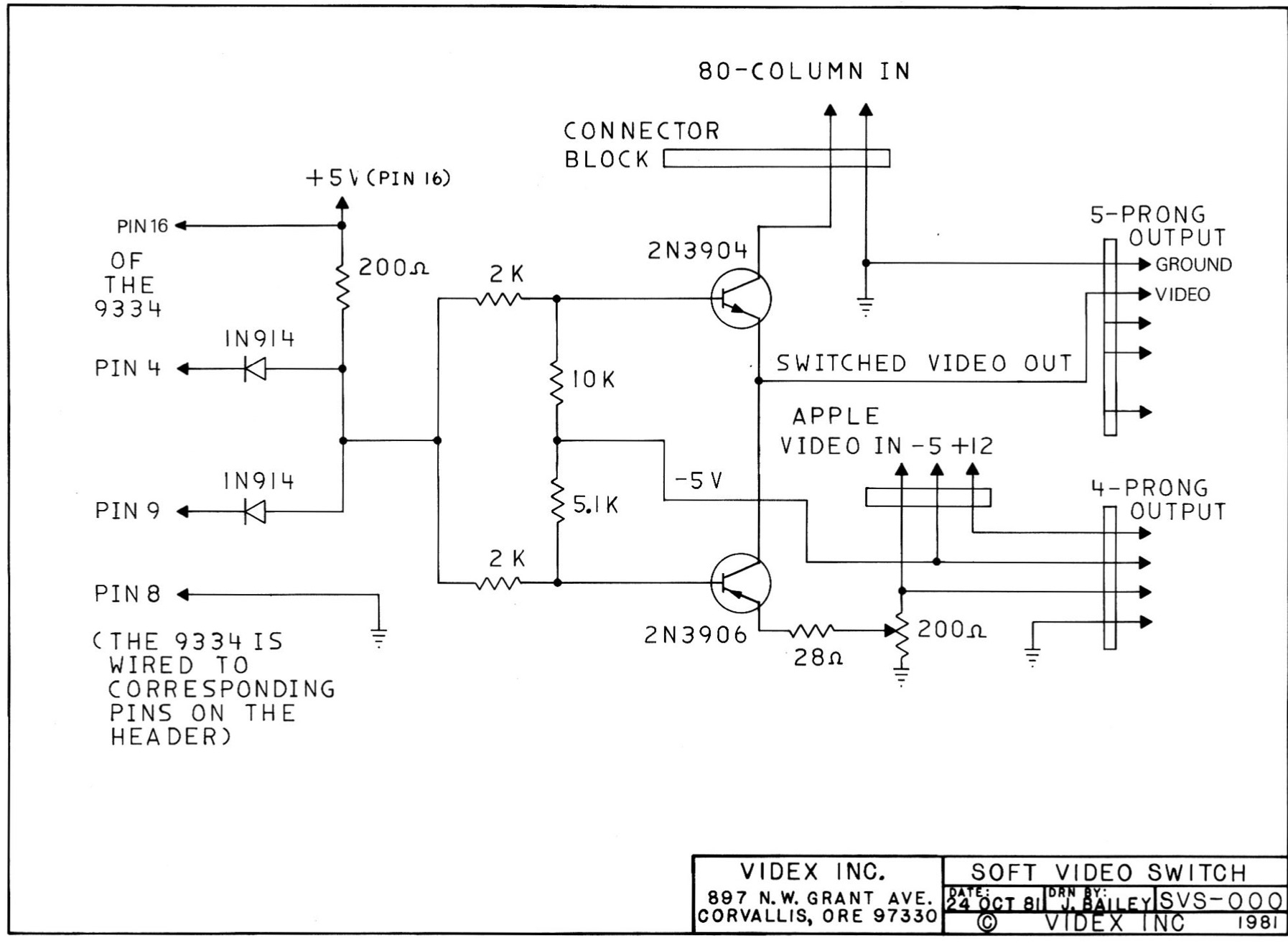 I see a trio of transistors on your card - two might be for the soft switch and one for the video amplifier.

Anyway, trace it out on your card, it might be the same, then again it might not...

I notice that there may be nmore than one Franklin 80 col card.  This particular one has an outboard soft switch, and the video connector is 80 column out.  (However this card looks like a Videx clone.)  http://dunfield.classiccmp.org/franklin/h/a1kopen.jpg

Thanks for that, much appreciated.

It looks like a lawyer-friendly copy of the Videx, yes.  I've started tracing it backwards (from the pin headers) and forwards (from the 6845), and it's functionally similar to the Videx design.  The flip-flop is a 74LS174 instead of a 74LS175, it's feeding a quad-input NAND as opposed to the 74LS00's two-input, and so forth ... but it's close enough.  (it's also a four-layer board, which means I need to tone out many traces)

It does appear to be a soft-switch, taking mainboard video through J2, output through the RCA jack.  One transistor (2N3904) is the amp, as you suspected, and one of the two 2N3906s is doing the actual switch.  I'm not sure what the other PNP is doing yet.

Thanks very much indeed for pushing me in the right direction.  I'll post an update when I get this nailed down.

There is an "AUX VIDEO" jack on the mainboard at location L9.  There is a single header just below it labelled "TEXT/GR".  Pins 1 through 3 on the aux video jack map to pins 1 through 3 at J2 on the 80 column board.  Pin 4 at J2 is connected to TEXT/GR.

I say "working" because, although this makes 40-column passthrough and 80-column video (via PR#3) work, the FloppyEmu refuses to boot as long as the card has J2 wired.

The Franklin has non-trivial additions to the system oscillator generation circuits; this appears to change something in the bus timing that the FloppyEmu hates when the FloppyEmu is connected via an Apple Disk][ card.

I'd worked around it by lifting a pin on the flip-flop that Franklin added to the circuit and adding a jumper to make it look like the ][+ circuit, and that fixed it with both a Disk][ and a Franklin floppy controller.  However, adding the Franklin 80 column card breaks it completely (in the Disk][ case) and disables the top 16k (in the Franklin case).

Clearly I need to spend more time comparing the Franklin and ][+ video/timing circuits ... but the 80 column card is functional now.

Thanks for the assist!

Glad you got it working.

I think maybe at this point in time what I'd do is cut my losses and try a different floppy drive replacement solution.

Maybe see if you can get your hands on an SDISK-II or a KBOO-HK device, or even a Booth-HD (although that one can have finicky bus timing issues too depending on the environment)

Thanks for that, much appreciated.

It does appear to be a soft-switch, taking mainboard video through J2, output through the RCA jack.  One transistor (2N3904) is the amp, as you suspected, and one of the two 2N3906s is doing the actual switch.  I'm not sure what the other PNP is doing yet.

If you look at the soft switch diagram, the PNP and NPN transistors operate as opposite switches depending on the voltage at the base.

At logic-low the PNP transistor conducts and the NPN doesn't so 40 columns.

At logic-high the NPN transistor doesn't conduct and the NPN does, so 80 col.

This diagram shows it a bit better with the appropriate logic states: 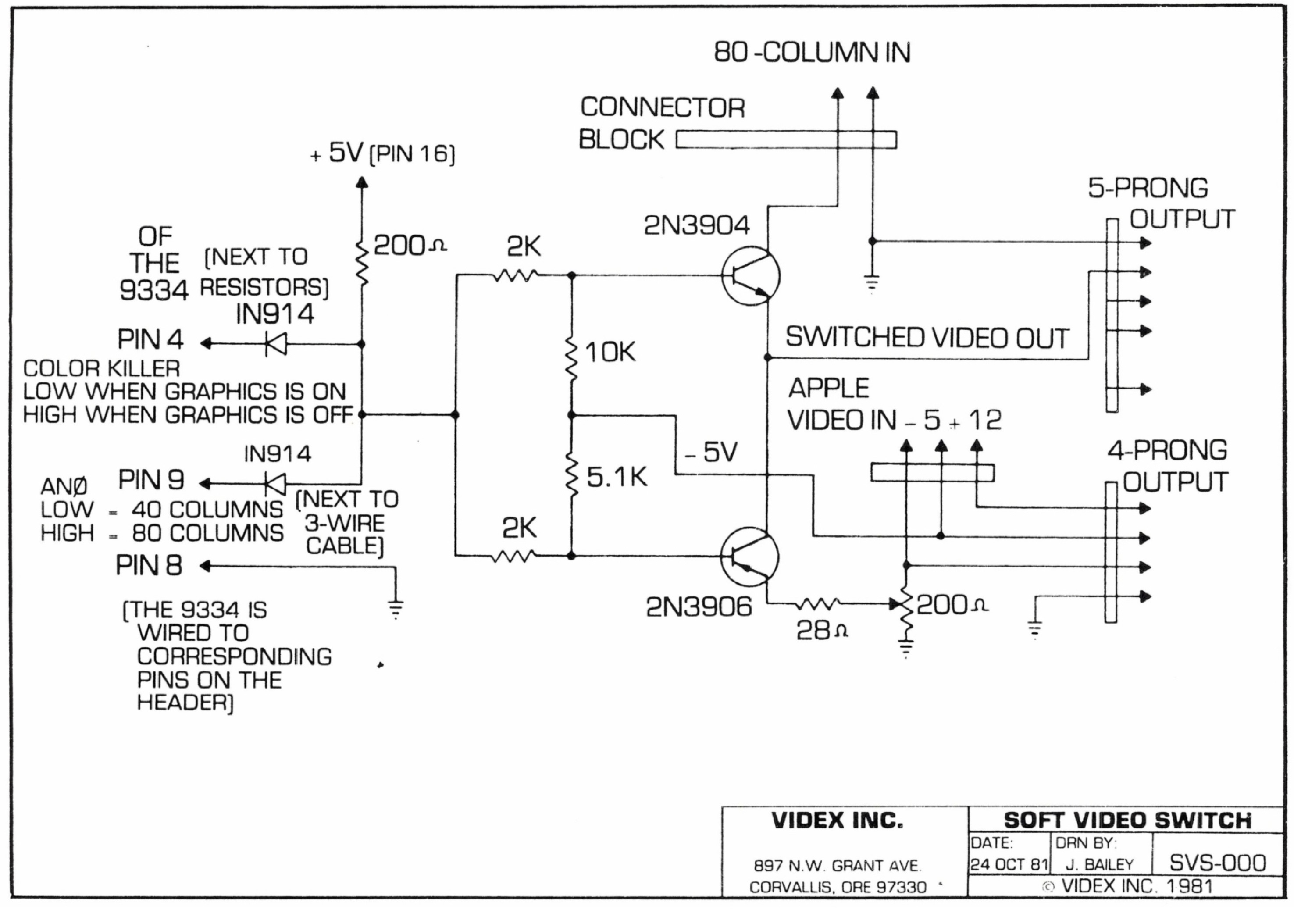 Thanks, that clarifies what it's supposed to be doing.

This card is using two PNPs to switch the video -- where the 3904 is on the diagram, the card has a PN4258 flipped around the other way.  The 3904 is upstream of it, amplifying and feeding the 4258.  Here's a rough ugly schematic: 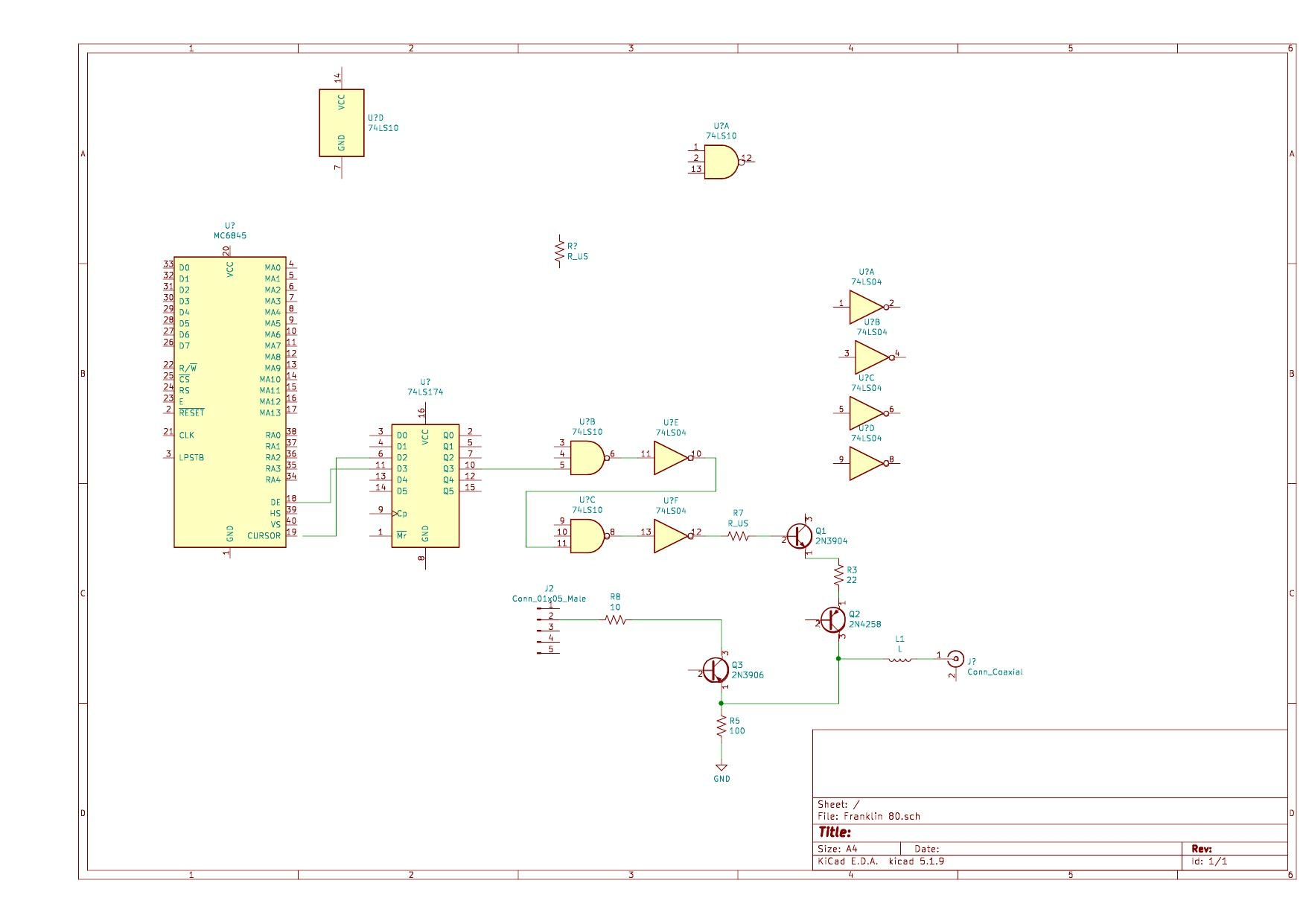 Thanks again for all of this.