Does anyone out there have one?  I've been thinking about building a clone, and I'd like to get some info about the card I can't find on the Apple II Documentation Project about it.

The pics on there I can't see the value of a few components and ideally I'd love to get a picture of the card with the AY-3-8913 chip removed so I can maybe verify where a couple traces under the chip go.

So I've been working on trying to reverse engineer the Covox Sound Master...  from little more than just the pics...  And worse, trying to make a copy of it using a different version of the sound chip with a different pinout...

My interest in this is it is a very simple sound card with a minimum of chips, and the reason for using an AY-3-8910 clone instead of the AY-3-8913 the original card uses is because the clones from File, Winbond, etc. are readily available and cheap -- and I have a whole bunch of them.  The 8913 version is more sought after because it fits directly into Mockingboards, is smaller, etc.  And it is unfortunately less readily available.  Not unobtanium, but not as easy to get and cheap as the larger version.

The Sound Master card basically has 1/2 the capability of a Mockingboard because it only has one sound chip -- and also is only mono output because of that.  The lack of the 2nd sound chip dramatically simplifies things and cheapens things out since it has two fewer 6522 chips in addition to the 2nd sound chip, as well as less logic chips...  only 1.  Also obviously, no provision for the speech chips like in the Mockingboard -- which since those are unobtanium isn't really much of a loss in practical matters.  A lot of games I think only actually use one of the sound channels on the Mockingboard, so they probably wouldn't lose much being used with this lesser card if they can be made to work. 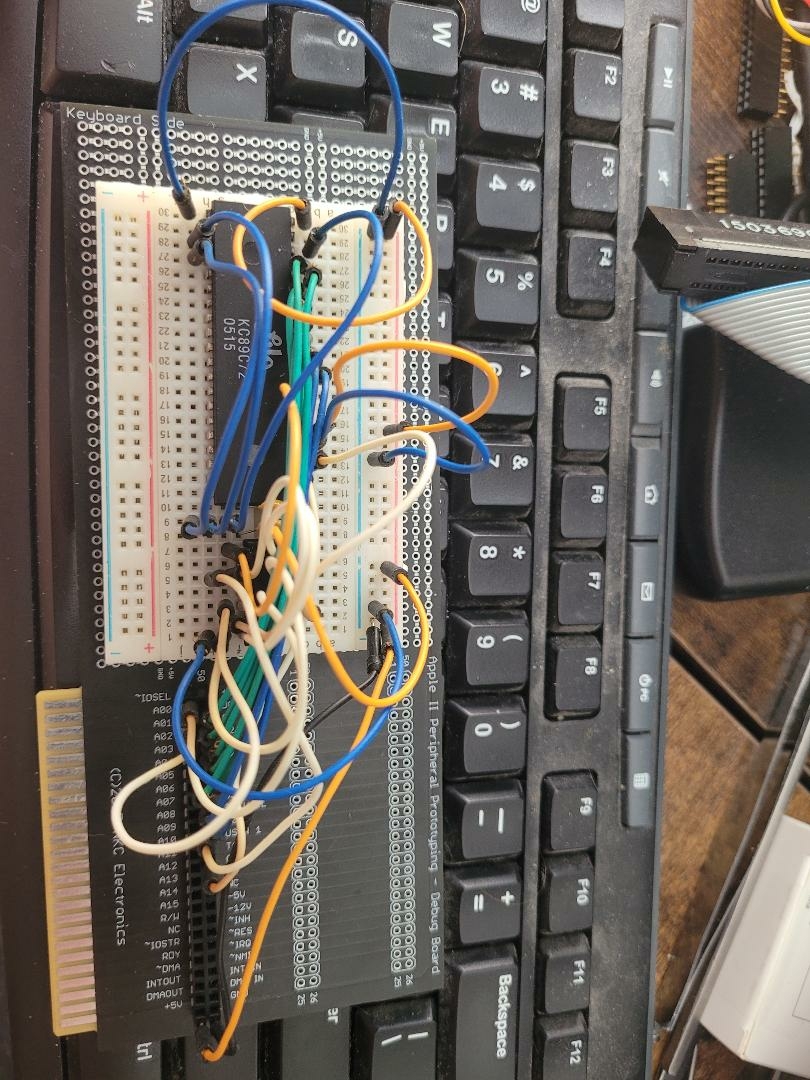 This is a protoboard with a breadboard on it that I've been working on...  I'm having to make some guesses as to where some traces go because the pics I have of the original card don't show conclusively where some traces that are under the chps go.

In addition to substituting the different version of the chip, because I don't know the values of some of the capacitors and the potentiometer in the original card I'm planning to use a different amplifier circuit.  I have a bunch of small amp circuit modules that I will probably use for testing.  They're pretty easy to use, basically supply power and line in and they produce stereo output, but I'll bridge the single channel out from the card to both channels on the amp.

Anyway, one of the things I did to try to figure things out was notate the original pics (from Apple II Documentation Project). 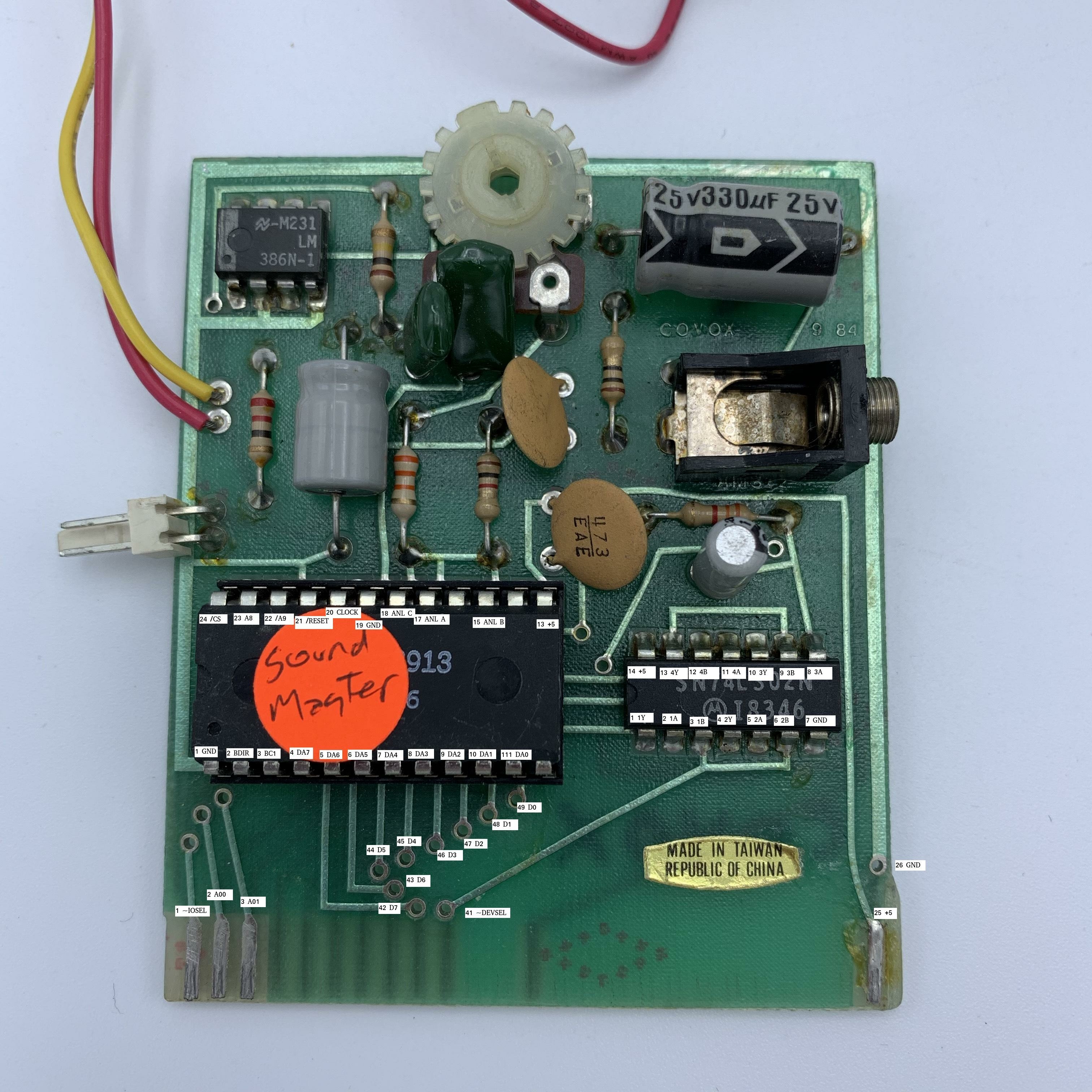 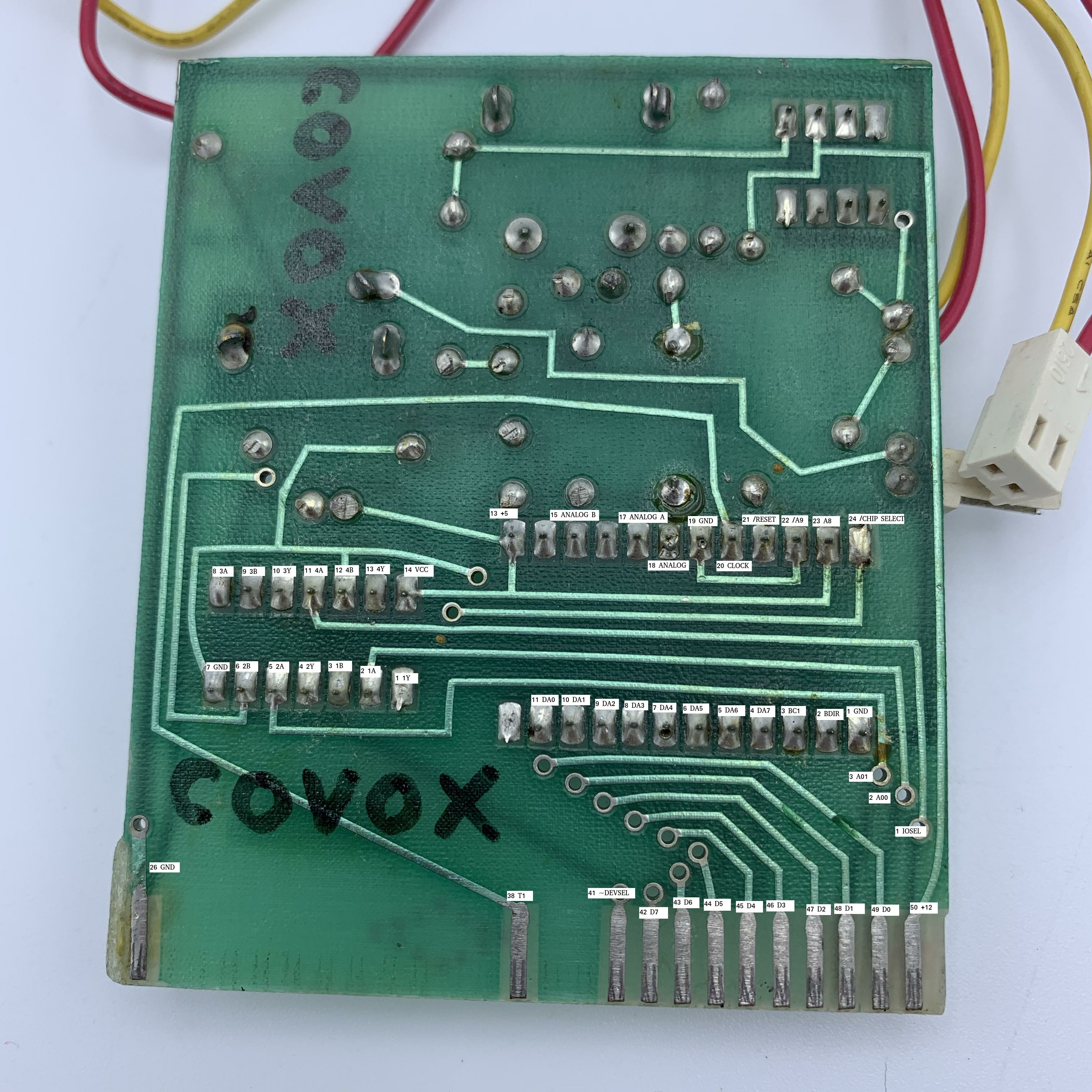 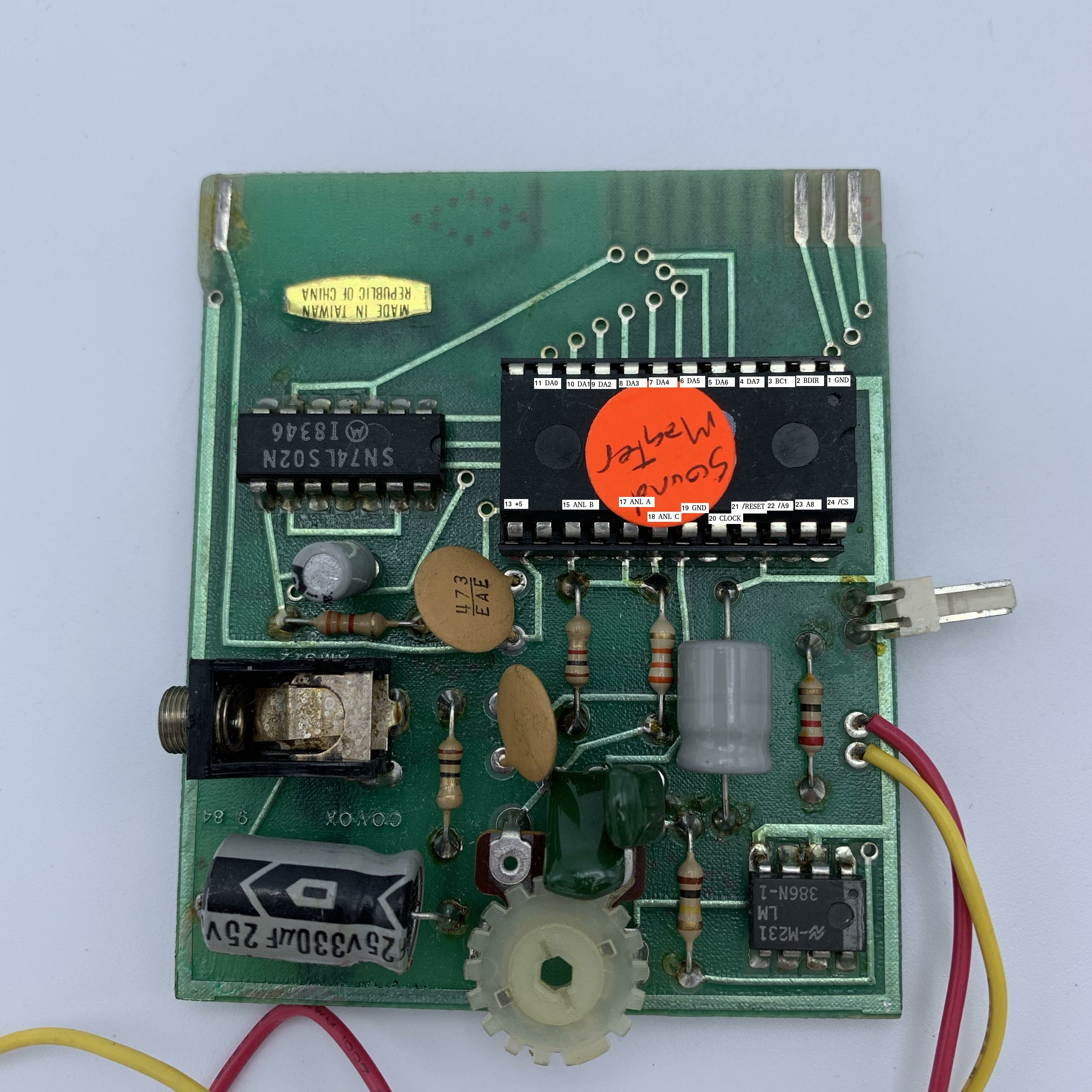 Oh, I forgot to post the pics of the different versions of the AY-3-89xx chips...

Another idea I've had is an adapter board to be able to use the AY-3-8910 style chip in a board like a Mockingboard that is designed for the AY-3-8913.  It should be as simple as just re-mapping the pins with a 40 pin socket on top and ic sized header pins going down.  For a Mockingbaord obviously two would be necessary.

Another idea I've had is an adapter board to be able to use the AY-3-8910 style chip in a board like a Mockingboard that is designed for the AY-3-8913.  It should be as simple as just re-mapping the pins with a 40 pin socket on top and ic sized header pins going down.  For a Mockingbaord obviously two would be necessary.

If size of the board isn't an issue, have both 40 and 24 pin sockets on the PCB and just have one populated.

If you need a KiCAD project to start from you can use the Apple2Card and just delete all of the logic having to do with the 82C55A.   Once you have the pins mapped, it should be fairly straightforward to lay out.  If you have trouble with this, I could delete it for you and present you with a "blank" card.

A note:  if you have a problem getting an open collector inverter, you can hack an ordinary 74LS04 by placing a 1N4148 diode at the output with its cathode at the output so that the output can only sink current.  This limits the voltage to about 0.6 V low, but is usually enough for many purposes.

I appreciate the help.  I was planing on basically doing exactly what you suggest for making a KiCAD project.  I've been working on learning KiCAD.  I already figured out a little about how to create new symbols.  I needed a 27C16 for another project (2716 adapter to substitute for the MMI 6301s on the ACI card for the Apple-1) and the closest thing they had was a 27C64.  I was able to create the 27C16 based on the 27C64.  I also created a part for the MMI 6301.  KiCAD didn't even have PROMs at all, so I had to figure out how to create that first and then the 6301.  I should create 27C32 and 6309 symbols as well.  I need to create a git pull request for the people who maintain the KiCAD symbols so other people can use those.  Anyway, I'm slowly figuring out how to place parts and edit connections on the schematic view and I'm trying to figure out how to lay out a PCB and hopefully someday be able to create Gerbers and get PCBs fabbed.

Anyway...  I'm really a software guy, I just dabble in hardware...  and there was a long gap between when I dabbled in hardware in the 1980s until I started getting interested in doing it again a few years ago, so there are a lot of gaps in my knowledge.