Has anybody successfully ordered from Newark (Farnell) recently?

I placed an order an order with them Thursday night. It was after the shipping cut-off time, so I expected it to ship Friday. Saturday morning, the order is still listed as pending, and I notice there's no order confirmation number. Newark is closed on weekends, so I send an email asking about my order. By Monday afternoon it was still unshipped with no answer, so I start a web chat with customer service. Half hour wait. Customer service says they can't find my order, even my ID, screenshots, and the order ID from the url. I'm told I need to contact sales to have the order processed. So I end my chat with customer service and start a new chat with sales. Another half hour wait. Sales can't find my order either and tells me I need to place a new one. I ask about cancelling my current order, which is still listed as pending shipment in my account, and am told to "just consider it cancelled". I ask sales for help placing a new order. He says he can't do that because he's customer service and I need to call sales.

So I call Newark Sales. A barely audibile woman who sounds like she's on a VoIP line from the other side of the world answers. We get disconnected after about a minute. I call back, same audio quality, disconnected again. Third time, same bad audio connection, but I'm able to get my order placed. That was around 1 or 2. I just tried to reference the chat logs to get the exact time, but they're just empty PDFs templates - no actual chats were saved.  Now it's after 10:30 PM and the order is still "processing".

Has anybody ordered from Newark recently? Did they fill your order promptly? I have a client with a machine down, waiting on this part. It's not a "factory can't run without it" sort of situation, but it's embarrassing that 4 days in I can't even give the client a tracking number. The part is out of stock most places, with the cost being triple at the next cheapest supplier, so I don't want to cancel if they're actually going to ship it soon.

I'm GUESSING that whomever took your order screwed it up or didn't actually enter it when you placed the initial order.

It was a 3-day weekend (MLK day) so you lost all that time.  I've done business with Newark in the past and I've not had that kind of trouble.

Not sure this helps you at all but you "normally" can expect a ship confirmation within a couple business days.  Othersise, I'd complain about it.

I received an email this morning with a tracking #, but they've still only created the label. Then this afternoon, I received a second email saying the part was out of stock. But they only had one in stock to begin with, and they didn't tell me which order they're referring to, so I don't know if they mean they're canceling the order for which I already have a tracking #, or the web order that never got processed. I tried to log into their website to check order status, but I'm getting a "Recaptcha verification has failed, please retry login" on a login page that doesn't even have a captcha.

Yeah, I think I'd be buying somewhere else at his point.  Pretty bad...

I emailed asking which order got canceled, and received an automatic reply saying I should get a response in 48-96 hours.

I finally got logged in. Tried to view the invoice, but: 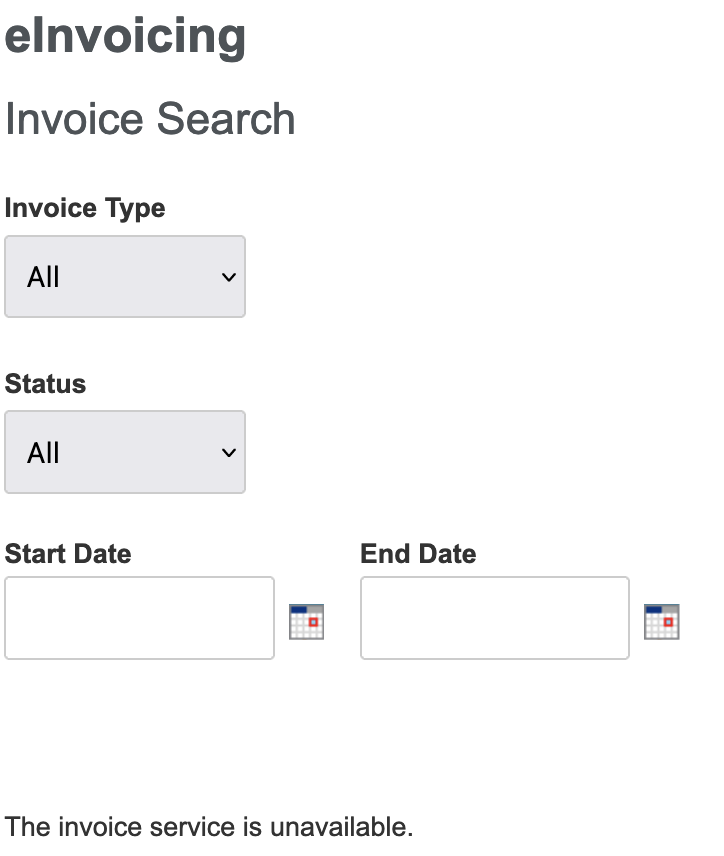 I was able to view order details, but there's no change to either order to indicate which one is being canceled at the moment. Tracking shows the package as "On the Way", but with no location check-in, no arrival data, and a "Delay" alert. And I noticed this interesting math on the order page: 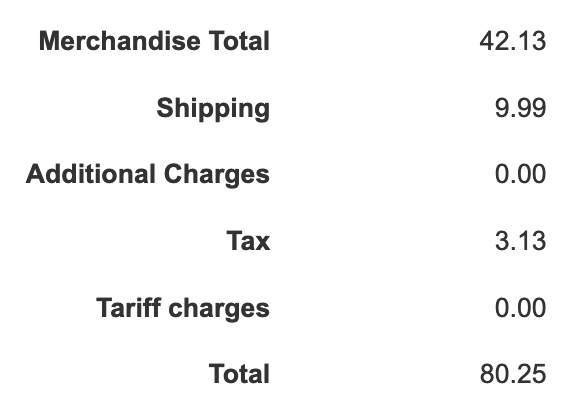 I can't believe a company like Newark is failing this badly.

... caused by the fallout of the COVID pandemic and the destructive COVID policies of some jurisdictions or companies. Despite in the U.S., the Supreme Court has spoken against vaccine mandates, many companies have already fired lots of workers who - fearing death and injury - have refused to get the jab. And as long as they insist on new hires to be "vaccinated", there are no takers for the open positions. Any complex system (warehouses and the IT infrastructure) run only so far after the key people who maintained them are gone.  No large IT system runs  well without permanent TLC. Fire the key sysops and it goes downhill from there. This explains why certain online ordering systems nowadays show bizarre behavior patterns. And why tracking a parcel is a hit-and-miss. Some still track OK, others "disappear" or get "stuck" just to land on your front porch at the most inopportune day or time. And other mishaps and nuisances.

As of today, there are hundreds of huuuge container ships waiting outside the ports be unloaded, with 2.7 million containers full of industrial goods being delayed, see here: https://www.swwlogistics.com/new/409-container-ships-27-million-containers-are-waiting-to-be-unloaded-outside-the-port-meishan-wharf-plans-to-reopen-next-week.html .... but not enough workers. All fired for refusing the jab ? Look at the protests of the Canadian truckers against the "vaccine" mandates unfolding as we speak. How long can the Canadians live without their food being hauled in by trucks ?

China also has periodically shut down some parts of their industry, their postal system, some of their ports for (IMHO, nonsensical) quarantine measures. I had one parcel from USA to China being delayed by more than four months - it just did not move once it arrived in China. According to tracking system, it did not move anymore. A formal request at the USPS with claiming the insurance amount set it in motion again - after six weeks from filing the complaint. It took a further month to arrive at the destination. The steep postage paid was for 5 business days door to door. 5 days which turned into 4 months. We did not get what we paid for.

Now imagine what happens when one single component is missing in the just-in-time supply chain. It's pandemonium. Car manufacturers roll out cars that can't be sold because some black box is missing because one IC is missing. Try to get any IC broker on the phone these days. You can be in the waiting loop for the whole day and no luck. They offer you to record a voicemail. But they never call back. They do not respond to emails either. Some of the online request systems appear to be broken. Sys admin fired maybe ? Everybody  seems to be hunting for parts but nothing moves as it used to be. So there is a lot of activity and chaos and waste of time and money but no results. The ICs never appear.

So, dear reader, this is the situation. Worldwide. Supply chain disruptions everywhere and all caused by the actions of the various governments. They can print all the funny money they ever need for "continuity of government" - so they don't need our taxes anymore ? - but they can't conjure up components like nuts and bolts, 2 x 4s, food, and ICs out of thin air by any "executive order". Nor can they magically teleport pallets of food from California to Canada (or any other place in North America).

The wheels must be rolling ... and they don't roll. They brought all this upon themselves and us, The People, as if it was intentional. We should hold them accountable for all the damages they did cause. To the last dime. But until then, we need patience. Lots of patience. And a well stocked food pantry. You may not be able to buy what you want at all times. I hope it does not get worse but even when you cook something, and one ingredient is missing, it's not tasty as it should be. This is why I like homemade Pizza the best these days. You can put on it whatever you can find. Except for flour, yeast and water, all the other ingredients may vary, and it still tastes great and satisfies. Even if you have only some olive oil and some spices, you can make a good "poor man's pizza". Indeed, in Italy, traditional pizza was invented to feed a poor family on a small budget. The skill to slice Prosciutto (or other sausage) so thin that to can look through it also comes from poverty. Except we have all the funny money we ever need, but the supermarket shelves are empty (not all are empty yet). What a shame.

Modern times indeed ! (hint: put the old Beatles song "Back to the USSR" onto the turntable, to get the mood !)

I suppose I inadvertantly made your rant on-topic for once.

The package was finally checked in with a UPS location, so it looks like my part is on its way.

"The RFI showed that median inventory held by chips consumers (including automakers or medical device manufacturers, as examples) has fallen from 40 days in 2019 to less than 5 days in 2021. If a COVID outbreak, a natural disaster, or political instability disrupts a foreign semiconductor facility for even just a few weeks, it has the potential to shut down a manufacturing facility in the U.S., putting American workers and their families at risk."

While "Uncle Bernie" sometimes has a sick humor, he always is factual. This thing is real. As pilots say: "Brace for impact."

Why do you suppose things like computers and cell phones are so redily available? I ask because I had to get a new iPhone 13 and new iMac, both loaded with memory for my wife this christmas, and I had no trouble finding them.

Me thinks this "computer shortage" is targeted at the automobile and medical industries ... for a reason.  Just say'n....  :-)

I expect it has to do with the length of their respective supply chains. A cell phone or mass produced computer, despite its use of the latest generation IC technology, is typically assembled in a smaller number of steps that can be more easily integrated into one facility. The main component is the PCBA which is produced in a board fab and assembly house, and the subsequent steps of assembling and testing the final product are simple enough that they can be done anywhere with no capital equipment. By contrast, automotive and medical manufacturing need to bring together many different specific parts from suppliers and use specialized machinery to assemble and test. On top of that, they have stricter qualifications on which parts can be used which complicates the inventory management problem. Simple "jellybean" components like voltage regulators are more expensive in automotive-qualified versions and the manufacturers need to acquire those qualified parts. Similarly, the medical equipment field needs to get components qualified to its requirements.

Compare the respective number of FRUs involved in a cell phone and an automobile to see how different are the tasks of managing their inventories.