I thought maybe it would be best to create this "Part 2" so the sub-topic of DuoDisk would be easier to find and maybe someone in the future would be helped by following my progress with each part of the //e  resurrection.

Part 1 - The Power Supply is here: https://www.applefritter.com/content/resurrecting-apple-e.It started to divert a little from just the power supply (with some pretty good tips and advice about dirty disks), and some other folks discovered the same capacitor fix I did (again with great help from the folks here) so it's still a good read for that.

Now for Part 2 - The DuoDisk Drives.A quick re-cap: After replacing the RIFA capacitors, the computer booted up fine and stayed on without incident. However, the DuoDisk doesn't work. I took everyone's advice on cleaning heads and disks, and checking the speed, but nothing is happening. When the computer comes on, it beeps, shows the Apple //e  title, but the drive just spind until I do CONTROL-RESET. Then it goes into BASIC. I can write and run BASIC programs.I had the DuoDisk apart for cleaning so looked closer and saw that it does spin and the head moves just a little bit but won't go to the "home" position. I can slide it along the rails freely so there's no binding. I switched the drives - putting the #2 in the first position and vice versa. Then the one in the first position does same thing except that head does go "home".Now the new info:A friend of my son brought over a couple of boxes of stuff he thought I might could use. It's remnants of a system he used in his office then gave to his son many years ago. Not everything survived the years and teenage curiosity but there's some useful stuff here: 2 Apple 2c power supplies, 2 Laser 128 computers, 1 Apple 9" green-screen display, and 1 Apple 5.25" disk drive.After cleaning the heads and insides of the single Apple drive, I connected it to my controller card and Bingo! The //e  boots and the drive, saves, retrieves and purrs like a kitten. By using substitution and elimination I was able to troubleshoot (and I think I found the trouble with) the DuoDisk.

Do  you folks think I'm on the right track here? I pulled and reseated all the ICs on the board but that didn't make a difference. Could it be one or more bad ICs? And which ones could be bad? I made a list of them I can post if needed and I tried to find where I could order them online. Some are hard to find, and some I'm not sure if the numbers I found online are legitimate substitutes. I welcome all advice on this.

Mr. Timelord, I believe this is where you were going with your line of thinking. I would appreciate reading your thoughts on my conclusion.Thank you one and all,

You're totally on the right track.

Most of the time there isn't much mechanically wrong with the drives themselves as you have proven.

Your problem lies with the analog board on the DuoDisk.

Could be the stepper motor controller chip is fried.  One of the ULN2006B chips, I think.

Unfortunately there isn't one aboard the single drive analog board to swap and test.

You're totally on the right track.

Most of the time there isn't much mechanically wrong with the drives themselves as you have proven.

Your problem lies with the analog board on the DuoDisk.

Could be the stepper motor controller chip is fried.  One of the ULN2006B chips, I think.

Unfortunately there isn't one aboard the single

Thank you baldrick. You're correct that the chips on the single analog board can't be tried. They are all soldered in and I'm not about to risk removing them.The single disk analog board has one and the DuoDisk analog board has two. They are all ULN2003A chips. Can I assume those are equivalent to ULN2006B, or at least substtutes? For one of those, the board itself has 2003 stamped on it but one of the chips is marked: M54523P so I assume that's an equivalent substitute. (Realizing of course what it means to ass-u-me.)

I thought it might help to post this list. These are the ICs on my DuoDisk Analog Board. They are all socketed.Disclaimer: The descriptions are what I found using Google.

I never like seeing a thread that doesn't come to a resolution, and fearing this might look like one I better make an update. I've had some issues this past month but here's what I've done with the DuoDisk:

Taking baldrick's advice I started with the ULN2006B chips. I don't have any on hand so all I could do to start was swap the two and hope that would allow the boot drive to work. - It didn't. I read elsewhere that other chips to consider are the 74LS125AN and 3141E. Seems reasonable to me. I can't find a source for the 3141E but I'll keep an eye out for it.

In the meantime, recall that the box my son's friend brought included a Laser 128E. Well, I cleaned it up and it works fine. So I have that, the external Apple single drive, and the 9" Apple monitor. I'm able to run the BASIC program I created all those years ago (and realize how limited it is in its purpose) and, most importantly, The AppleWorks disks work including my engineering spreadsheets. My original goal in all this was to be able to retrieve those spreadsheets and recreate them in MS Excel. I don't yet know if I can print them out but copying one cell at a time will certainly give me something to do on these long frigid winter days and nights.

Someday I'll see about getting the DuoDisk running since I will have to return the Laser 128E set when I'm through with the spreadsheets. I would sure like to get the whole //e set going, including the display and printer. And I found my original disks for Sargon III, a chess game I bought for a lunch-time indulgence back in the old days. If I remember, I could never get beyond level 2. I think the game went to level 9.

So I guess this an interim resolution (of a sort anyway).

I picked up a free Apple//e and Duodisk last summer in similar condition to yours.  Couldn't touch it without needing to wash my hands etc.  Once I got everything cleaned up, it all seemed to work great.  Both drives read and wrote disks just fine.  But after a few days of use, drive 1 started to have issues but drive 2 continued to work fine.  The head chatter at startup got quieter and quieter and eventually the head wouldn't move at all.  It would still spin just fine, but no head movement.

The first thing I tried was swapping the drives which did not solve the problem, meaning the issue was on the analog board.  I took a look at it and saw a few pairs of the same component.  I'm no expert but I assumed if you have 2 sets of the same component, one may go to one drive and one may go to the other.  So I started swapping components and finally desoldered and swapped these 2 transistors.  After that drive 1 came back to life.  I then tried drive 2 and the head wouldn't move. 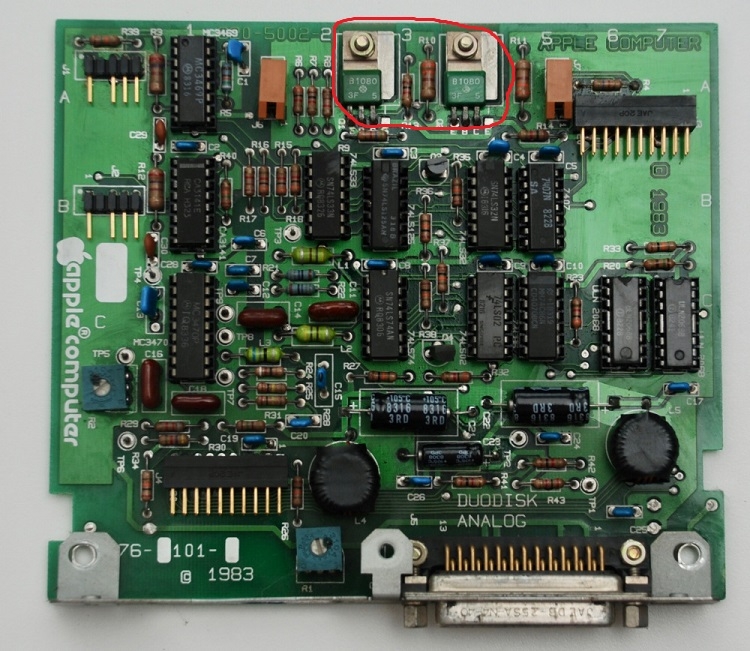 So now I was able to boot, but I wanted to get drive 2 working.  The problem is they don't make that transistor anymore.  and again, not being an expert, I had a hard time trying to find a modern equivalent to replace it with.  And through a through a lot of digging, I came up with this: https://www.bdent.com/2sb1243-rohm-transistor.html and this was the only site selling this part that I could find.  I bought 3.  I had to bend the legs a little weird since the pinout was in a different order.  Destroyed the first one because I read the pinout backwards.  In the second try, it worked.  and I now have both drives working in my Duodisk.

The transistors may or may not be your problem, but the first thing I would try is swapping them.

Thank you redbeard321. The project has been placed on the back burner for a number of reasons but I'm saving all of the information I learned on Applefritter in the event I am able to resume.

In any event, since that borrowed Laser 128E worked, I was able to see my 36 year-old-programs again after many years. And on a personal note: I was contacted by an engineer that worked with me back then who told me my work has been migrated to, and refined on, modern computers and is still the basis for their component design calculations. That's quite a nice feeling for an old lady in her declining years.