Shoe-horned into the back of a Ford Focus ZX3 (yes, the hatchback closed just fine): 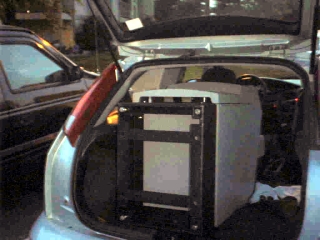 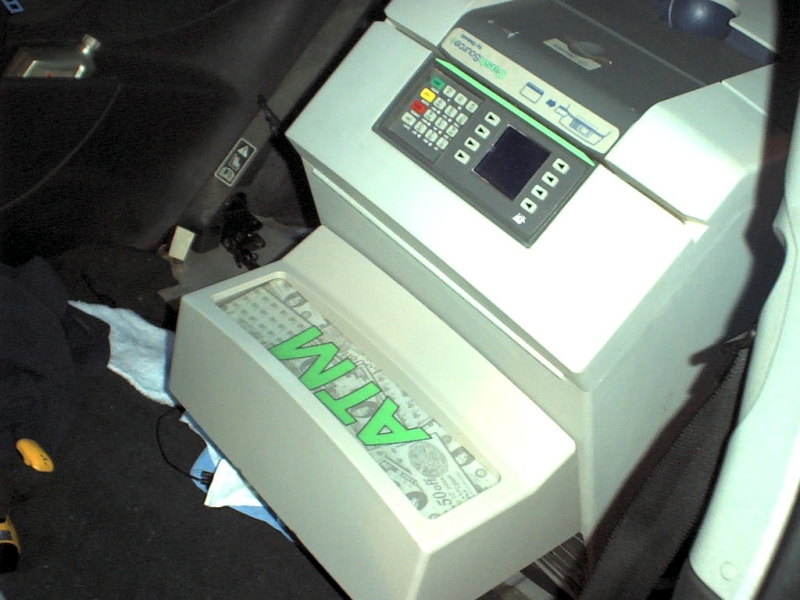 I had some rather pricey repairs to make to one of my cars this week, so I finally decided to sell the ATM. I didn't find it in a dumpster, but someone was throwing it away, it was at the end of a driveway and I rescued it.

Today, some guy in upstate new york from a company called "WTF ATM Services" (I couldn't help but laugh) offered to "buy it now" on eBay ($400) if I could fit it, laying down, on a wooden pallate. I did fit it on a pallate, and now I'm not stark broke from fixing my car Tuesday morning.

This is the second most I've made from selling something that was destined for the landfill. The best score was $450 or so, for a Handkey II biometric scanner, used to replace prox-card readers on locking doors, which I dug out of Jon and I's fave dumpster a few years ago.

Selling trash is fun. Most of the stuff I sell on eBay (look at my feedback) is all stuff I salvage and refurbish from that one dumpster.

Now the fun part. Waiting for the freight truck to show up. No one knows when he'll swing by, so I just have to play it by ear.

of course is you just sold the ATM to one of those identity theft scammers you see on Dateline NBC. Woot! ;^>

(The "WTF" in their name is of course derived from the "WTF!? Where's all my money!?" exclaimation often heard eminating from their satisfied customers.)

I did already check up on the company, they're legit. And when I googled the name of the guy I sold the ATM to directly, it seems he has been in the cash machine industry for quite a few years.

It's a shame you had to sell it, that would be fun to play around with, make a hack out of it or something. A home cash dispenser would help with budgeting.

You are the one person I know personally who's actully made a profit selling junk. At least the junk you sell actully has "real" value, not just antwiky "somebody thinks it might be worth something" value. Like any other seller on eBay, you gotta sell what the people want to buy.

You seem to have cornered a certain obscure market for used parts that the computer parts sales people could only dream of hitting.