I suppose this makes up for having to sell my ATM Machine...

I work at a college that has a pretty good replacement cycle as far as hardware and other things go. 3 years on desktop (lab and office) computers, 3-5 years on servers, monitors, scanners, printers, etc.

It's set up so that about 1/4 of the hardware gets replaced on campus every year. At the same time, there's a similar cycle for kitchen hardware, office furniture, and almost anything else you can think of at a college. Even vending machines.

So, what do they do with all that surplus STUFF? They auction it off around this time every year!

This year, I made like a bandit, practically stealing stuff. Most of it was obscure and no one knew what it was anyways.

$10 each: Three 400MHz UltraSparc-powered (64 bit) Sun Microsystems Ultra 5's. I sold one to Jon right after I bought it, I was only going to get 2 but he wanted in on the deal so I saved him the hassle of bidding). There had to be two dozen of these things scattered among various Dell and IBM horizontal desktop PC's. I'd bet most bidders thought they were Pentium 60 desktops.

$20: Dell 21" Flat screen trinitron CRT monitor. It has some issues (washed out and refresh lines) but I can probably fix it.

Then, I needed some SCSI CD-ROM/CD-RW/DVD-ROM (I didn't care which, just needed SCSI drives) to replace some dead drives on my CD-ROM server. I had to buy a whole pile of crap to get some external burners (I was going to gut the cases and put the RW's in my CD server) and ended up with a semi-functional HP OfficeJet (Fax/Scan/Print/Copy), some old hard-shell camcorder cases that I don't want, and another CD-ROM tower with an embedded network file server and 6 more SCSI CD-ROM drives. For $10 total.

I gutted 3 of the six CD-ROM drives from the tower, and one of the external CD-RW's was a parallel-to-IDE burner, so I didn't get to use that drive. The other burner was indeed SCSI, so now I have another burner in my CD Server, a full array of drives -- 2 CD-RW, 3 Slot-Load DVD, 4 Caddy-loading CD-ROM, 4 Tray-loading CD-ROM and a 73GB SCSI drive to archive DVD or CD's offline.

The remaining CD-Tower and my original CD Server both have Axis Storpoint embedded servers in them, but it turns out the one in my existing server has a lot of extra features. Both share files over NFS, NetWare, AppleTalk and HTTP, but my existing StorPoint has 2 SCSI channels instead of one, shares over FTP, and has more robust configuration ability. I shelved the old tower, but it still has 3 functional caddy-loaders if I ever felt like firing it up on my network.

I took the Ultra 5's and loaded Solaris 10 on one, and OpenBSD 3.7 on the other. I'm not sure what Jon plans on doing with his U5. He scored some other stuff at the auction as well, I'll let him chime in.

Downloading SOL10 right now. I alredy tried SOL* as I already had the CDs from playing with my SPARCServer 1000. 10 should be much nicer.

Ultra 5s are cute little machines, but hoo, darn, are they *sluggish* in the hard disk department. My Ultra 10 (basically the same machine in a tower) took over two days to compile a "current" build of NetBSD. If you wanted to "seriously" use the machine I'd suggest keeping an eye out for old macintosh SCSI controllers. (Particularly the mac version of the 2940. Supposedly they work perfectly with those Suns. At least under the various free OSes. Dunno about Solaris.)

$10 is still a nice price for one, though. The "flops.c" floating point benchmark shows them as being slightly faster clock-for-clock then G4s when it comes to heavy math. For whatever use that is. ;^>

Of course, I do have a winblows 2000 machine running at 1.2 GHz but OpenBSD on my 300 MHz Laptop runs circles around it. I wish I could say the same thing for OSX on my Wallstreet, but that is some SLOW computing right there. I think NetBSD on my Performa 550 probably rivals OSX on the Wallstreet in the speed department.

Downloading SOL10 right now. I alredy tried SOL* as I already had the CDs from playing with my SPARCServer 1000. 10 should be much nicer.

Want to just use my Solaris 10 media?

On a bonus side-note, I think I'll probably just use one of these when I put a co-lo server at NetStandard. I was looking at buying a 1U or 2U barebones system from a shop in town, but all I need is a webserver and database, and these puppies fit quite nicely in a 19" Rack. It's not like I need GHz of horsepower for this project.

With the dell monitors, they have a colour return function in the OSD (sets the black level I believe). Mine only became usable after leaving it on for 30 mins, but it could have just been busted.

Have a peek around in the OSD anyway and see what you can see.

Thanks for the heads up. I saw Color Return in the OSD but it said "Available After Warm-Up" and I figured 15 minutes would have been just fine, but it still wasn't active. I guess I'll leave it running a bit longer. That sounds like it'll be the ticket. Don't know that I would have figured that out myself.

Now that I'm back home, it's already 225MB into the 3rd CD. I'd thought about ordring the whole Media Kit, but I didn't like the $50 I'd need to get it. It looks like a nice kit for the price though.

With the dell monitors, they have a colour return function in the OSD (sets the black level I believe). Mine only became usable after leaving it on for 30 mins, but it could have just been busted.

Have a peek around in the OSD anyway and see what you can see.

Well, my wife bought a server from Jon today, and I used it to warm up this dell monitor. Color Return did eventually come available, but it didn't fix the problem. It helped a little.

I did some research. As it turns out, this problem is common in the Dell P1110 21" monitors. I found an awesome write-up HERE about fixing them.

Only problem, it's after 10 at night and no one can sell me a 4.7M - 6.8M resistor this time of night. I start scrounging, and decide that I can probably sacrifice any of several electronics devices that I own in the name of fixing this monitor. No suitable resistors were found, though.

I ended up finding ONE possible solution in an old answering machine. An 8.3M Resistor. with some quick math I determined that it would combine with the 10M resistor to form about 4.5MOhms (give or take)

I decided to go for it, and instead of cutting the old 10M resistor out and replacing it, I just soldered the 8.3M in on the other side of the board.

While on the topic of hardware acquisition and fun:

This is the box we bought from Jon (Thanks!) 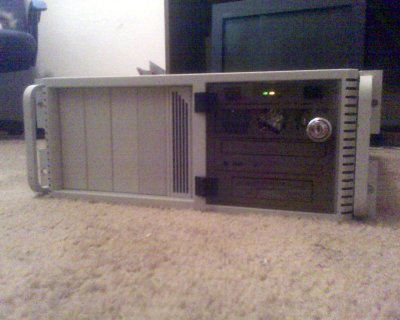 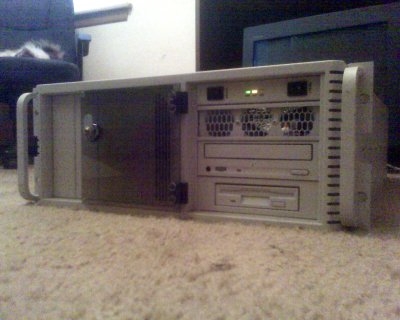 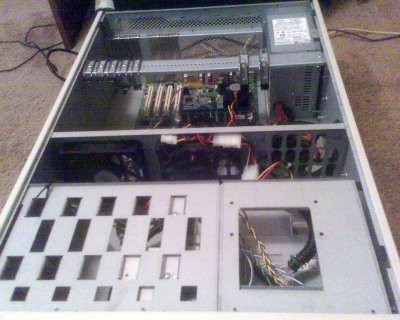 It's going to be my wife's new production BBS/MUD server. Her existing server is going to become a pre-prod environment for testing new rooms/monsters/spells/etc.

WOW. mud...havent heard about that in years. AT&T tried it out at my elementry school to make intereactive text environments.

What do you think of my looming/rounding/routing job on the cables? It was a HOLY CRAP! mess when I bought it. The CD-ROM cable (in it's original position of 2nd bay from left) was preventing a 120mm case fan from spinning, and burned it out. I forgot that I replaced the fan too before I sold it to you. The cables and wires were going every-which-way and you couldn't get anything unplugged without having a rat's nest to deal with, not to mention the airflow from all the crazy ribbon cable layouts they had...

When I opened it up I told my wife that whoever put it together knows quite a bit about airflow. All the fans were set to blow the same direction, and the cables were all rounded and loomed. I guess I assumed that you sold it in the condition that you got it in.

As far as the key, don't worry about it. I re-keyed the lock (aspiring locksmith, remember?) to work with the same key I have for my R2D2 CD-ROM server.

I'm glad my work seems to be in the right direction.

It's too bad the only 120MM fan I could fine easily on my side of the city was a mobo powered one.

It's okay, I like motherboard-powered ones because you can control and monitor it's speed with software.