Not so much a hack, but I *heart* OmniGraffle

At my new job, I ended up landing into a more NetAdmin position than SysAdmin. As such, I inherited a mostly MacOS office network and a mostly OpenBSD Corporate Server/Web network.

The network map the previous admin made was a tad inaccurate due to some changes, so I went about making a new one as my first project in OmniGraffle.

Although that diagram is proprietary and I cannot share it here, I decided to do one up for my home network in it's current state. There's a bunch of machines (mostly Pentium II and lower, several pre-g3 macs and other miscellany like WiFi PDA's) that aren't shown because they aren't used as often or even powered on right now. 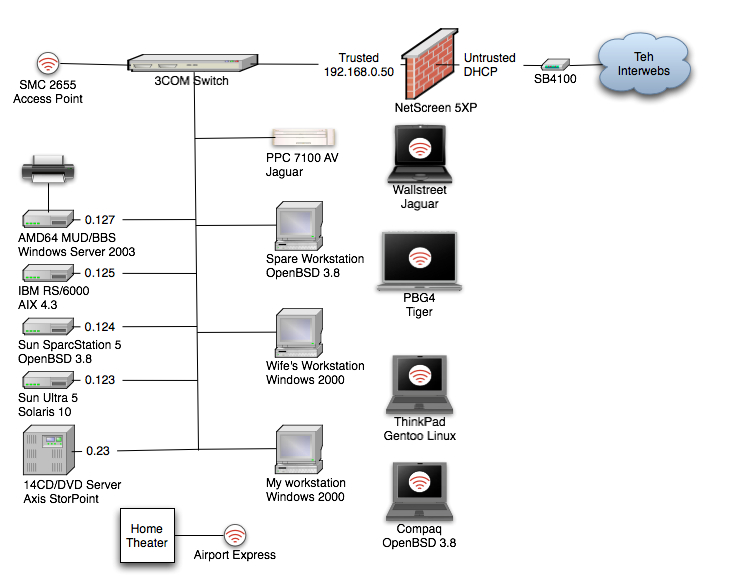 If you're in a position where you need to diagram stuff, this is definitely worth taking a look at. It knocks the socks off of Visio in every way (including the price)

And AFAIK he's setup at least one other sleeper style machine for his father to do music on.

I'm not sure how he's got it, but once Linux is running, it'd be a simple matter to run MOL and boot OS X thorugh it.

Actually, my dad just gave that thing back to me (he was using it for audio editing and as a screen to watch TV/Movies on in his recording studio via the Composite input)

He told me he got Jaguar on it before he gave it back to me a few months ago, but the thing is hosed and doesn't really have ANYTHING on it right now. I hadn't actually gotten around to hooking it up until a few days ago. my new job's been kicking my butt.

He's not a real bigtime mac gearhead. My guess is he formatted the drive and that's about it. I know when I gave it to him it was running 9.0 and that's before the G3 upgrade card. I think he bought 9.2 and had that running after I souped it up.

So, to answer your question, no. It doesn't run Jaguar. Yet.