The 'I didn't do it' kid
I take no credit for inventing this mod. The first time I saw it was at overclockers.com by one Mike Chin. I’ve merely documented the same technique for my G3 and am sharing it here for those who may not have seen the original.

Why?
The drive in my G3, a 20GB WD, is a noisy fellow. It has an annoying high-pitched whine that overpowers all the other computer noises in the room, and it gets on my nerves. Some would suggest getting a quieter drive, but I wanted to try something on the cheap first.

Pass me the hack-saw
Two quarter-inch thick aluminum plates were cut about 1 1/2″ larger than the hard drives dimensions. The plates had their edges ground and sanded to remove all burrs that might fall off into expensive areas and to prevent nice people from getting their hands cut. It also looks nicer. 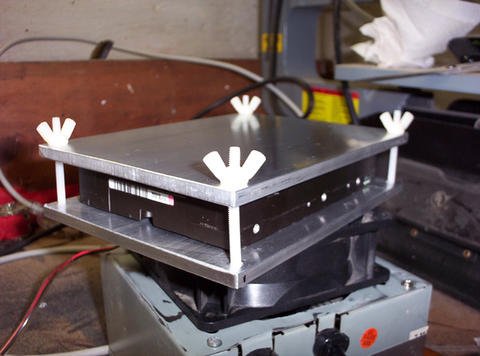 I held the plates together and drilled through all four corners with a 7/32″ bit, with a drop of 3-in-1 oil on the bit. Before I drilled, I used a Sharpie to mark one corner on each of the plates. That way when I put everything together, I can line up the holes and didn’t have to accurately measure each hole before I drilled. It’s a bit of a cheat.

The plates were cleaned again, and waxed with floor wax, and the drive placed in-between. Home Depot supplied the plastic bolts and wing-nuts, for about $0.15 each (and the aluminum was about $20 CDN for enough for two drive sandwiches, at a place called Metal Supermarkets).

I was concerned about the ‘do not cover this hole’ vent on the drive, but it seems to be working fine after over a month of light use.

Once the sandwich was made, I cut some foam to fit around the hard drive. I tested both foam from chair-cushions and a dense adhesive foam with a metallic surface on one side that’s designed for insulating furnace pipes. Both were similar in the small amount of noise they reduced, so I went with the cushion foam as it’s a bit easier to work with, and just slightly thicker than the height of the drive. I sliced a small gap in the foam to allow the hard drive power and ribbon cables to exit without compressing or distorting the foam.

We squeezes them, my precious
I tightened the wing-nuts until they were snug, and adjusted each one as tightening one loosened the other. Don’t over-tighten! I wasn’t too concerned, as I figured the plastic bolts would snap long before any damage would be done to the drive.

The plates act as a head-sink for the drive, so having it all packaged up like this creates no thermal issues yet, though there have been questions raised about cooling the chips on the drive. 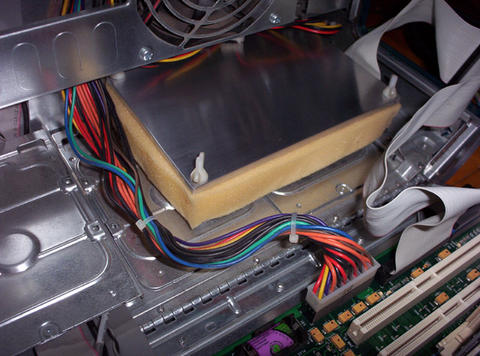 Lock & Load
Due to the size of the sandwich over the bare drive, I installed the drive at 90 degrees to how it sits by default on the hard drive sled, and had to use a different ribbon cable from the 4-ish inch one that comes with the G3 (at least mine did).

Conclusions
The drive is noticeably quieter. Not silent, and not as quiet as I’d hoped, but quieter. The most annoying noise was in the higher frequencies, and that’s been reduced enough that it’s competing with the power supply fan for attention, whereas before it was the dominant noise. Denser foam would help, but for now, it’s good enough.

The drive currently sits loose on the floor of the G3. It's heavy enough that it doesn't move around, and the G3 itself is never moved. Future work, should I be so motivated, would be to drill and tap mounting holes in the bottom plate to attach one of the G3's drive brackets(at 90 degrees based on where the sandwich currently sits).

We can only guess as you didn't explain the motivation behind the hack. "Why" is one of those well known "W"s every story requires.

I thought is was clear from the conclusion, but you're right... it should have been stated at the beginning.

The drive is noisy. It has a strong high-pitched whine that overpowers all other computers in the room, and gets on my nerves.

While I could have shelled out for a nice, quiet Seagate, I prefered to try something on the cheap first.;)

Nice going, seems to be fairl

Nice going, seems to be fairly well thought out, although I'd be worried about covering the air hole. It's not there to let heat out, it's there to keep air pressure even in the drive and prevent head crashes. It wouldn't take that much effort to pull the plate, mark mark it off, and drill a hole over the Do Not Cover hole. Also, to cut down on the noise in the machine, have you ever considered Dynamat? The stuff's not cheap, but it will cut down noise. A few well cut pieces to surround the power supply ought to really kill the noise.

If you are running OS X >= 10.2 you can install Hardware Monitor, which can tell you the temperature of your hard drive according to the S.M.A.R.T. circuitry inside. Might be a good idea to set up HW for a day or two and tell it to graph how hot your drive gets, if you are concerned about heat flow.

I also agree with the "drill out the pressure hole" idea, it wouldn't make the sandwich much louder or uglier but would definitely make the drive live longer.

I would HIGHLY suggest drilli

I would HIGHLY suggest drilling a hole to let that "Do not cover this hole" hole 'breath'. As you probably don't know yet, and contrary to popular belief, hard drives are NOT sealed enclosures, and that vent's actually a real vent, with a filter to keep anything but 'clean' air from coming in.

Why? Spinning up and down the drive would cause shrinkage + expansion and a few other negatives without this function, and the air intake is both meant to keep down on wear and tear and to keep the hard drive from overheating

Not the clearest define in the world, but there you go.

Re: I would HIGHLY suggest drilli

As you probably don't know yet, and contrary to popular belief, hard drives are NOT sealed enclosures

I did know, but a good point nonetheless. My thinking was that there is a channel of raised metal around the hole, though that channel doesn't extend to the outside edge of the drive, so while the aluminum plate may be covering the hold, it's probably not completely air-tight.
I'll try to get the sandwich out this weekend, and re-examine the vent and maybe take a couple pics to add here.

you'd have a hard time sealing that hole with just the bare plates here. The volume of air passing through the hole is miniscule. I say there's no need to worry about it. Of course if yer really concerned, providing extra space in the area of the hole can't do any harm I suppose.

Also, WRT to the hole and drive cooling - NOT! The hole has nothing to do with cooling the drive. Its sole function is pressure equalization between inside and out. As the internal air volume of the drive is small, the hole passes only extremely small volumes of air. Certainly not enough to provide any sort of cooling.

Grats on your first silencing project. I expect the temperature of your Hd to be higher than it was. The object of adding more mass to your HDs is to lower the resonant frequencies to less audible tones.

The actual thermal contact between the plates and the HD is probably poor unless you surface grinded both (1/10,000" theoretical). Thermal paste goes a long way for that too. Most HDs have acceptable failure rates (for the silence) running at 45-50C and I suspect your chips are probably running at that.

The best place for silent computing information is : http:/www.silentpcreview.com