Could be reseating some ICs, the IDC cable, the card itself in the slot or something else.. In any case it appears to work now and I've even gotten ADTpro to transfer with ProDOS, so that's one HUGE leap forward! I am however confused about some details regarding ADTpro, but think I'll post about that separately.

UPDATE 1: I just discovered that the cassette IN actually works! (after posting my message below).

The problem appears to be with my 16K RAM card (a Microsoft clone), so when I removed it (from slot #0), put the RAM chip back in the E4 socket on the motherboard (where the RAM-card ribbon cable previously went) I successfully transferred eDOS via ADTpro! What's even better -with a working DOS disk I tried reading several of the previously unreadable floppies and the ones I've tested gave me a directory listing! That's great because I have many of my own created files there, which I hope to be able to transfer over to my Mac.

But.... I believe I need 64K in order to be able to use ADTpro for transferring files/disks, so does anyone have any suggestions for how to go about troubleshooting/testing the 16K RAM card?

Oh, ASCII-express file transfers still refuses to work, so ADTpro appears the way to go (I've already spent too much time fiddling with this).

I'm having trouble transferring software (Asciiexpress or ADTpro (audio) from my Mac) to my II+ cassette in and am starting to think there might be some hardware issues. I found this handy chart at AppleII-box.de which tells me that two ICs (741 and a 74LS74) near the game port handles this stuff. So I've swapped those with other ICs.

I did notice something strange when doing a "SAVE" (from the Applesoft prompt) -that with a particular type of 74LS74; namely one labelled

.... a "thumping" or "clicking" sound would be heard. I had two of them (both labelled the same) and they both performed the same. Swapping it out with a different type of 74LS74 removed that clicking (I tried 3 other regular and clearly brand name labelled chips) and they all worked fine. That "PC" designation is something I've never heard about, and there's no brand labelling either (Fujitsu has a logo as far as I remember, so this seems to be something else -a fake or something perhaps?).

Anyway, that out of the way, and also checking the jacks and cables for both the cassette IN and OUT ports (using a multimeter), trying different volume levels, what else can I check?

Back to the actual problems I'm getting: with ASCII express I've never gotten anything to work. With ADTpro (2.0.2 on a Mac) I've been able to transfer both ProDOS and DOS, but only the first parts (the good thing is that obviously something intelligible is received, as the title text for ProDOS at least is fully readable), but running it doesn't work -instead of starting up I'm returned to the machine code prompt with some code, surely indicating some errors.

Just for testing, do you have an iPhone or Android phone you could try?  My Macbook has never worked with the ASCIIExpress site at all.  Usually does nothing, often gets a beep followed by an error or various on-screen hex data.  My MBP has Catalina as does my work macbook so I dont have another laptop to try, but I do know my old iPhone 6 (IOS 12) and old iPad 4 (IOS 10) both seem to work fine with the AsciiExpress site.

Unfortunately not, but I do have an old iPad Mini (1st gen.) running iOS 9 which I did actually try without any success.

But.... there's something I might have overlooked: is it essential to connect the cassette OUT of the Apple II? That's what I did and all of a sudden I almost got to load that (short loading time) game I mentioned earlier. I got a message saying that the game will start in 5 seconds, but then an asterisk and nothing more, looking like it dumped into machine code. All that might not be important any longer.....

Because... (after A LOT of trial and error) I now believe I have ADTpro with an audio connection fully working! You need a lot of patience for this sort of thing, but it's slowly paying off as I've now created an ADTpro disk for the II+, and successfully created a Locksmith 6 disk (for checking the drive speed of my drives). And finally I even got to transfer a disk from the II+ with files I created several decades ago! This will be great for backing up before the disks no longer work.

I don't know what made my ADTpro transfers working, but I did experiment a lot with the Mac input and output volumes. As you know, determining an exact volume level is no easy feat as there's no numerical settings, but..... go to the /Applications/Utilities/ folder and run Audio Midi Setup. There you'll see exact numerical values. This is what worked with my Mac Pro (mid-2010) with OSX 10.9.5 Mavericks: 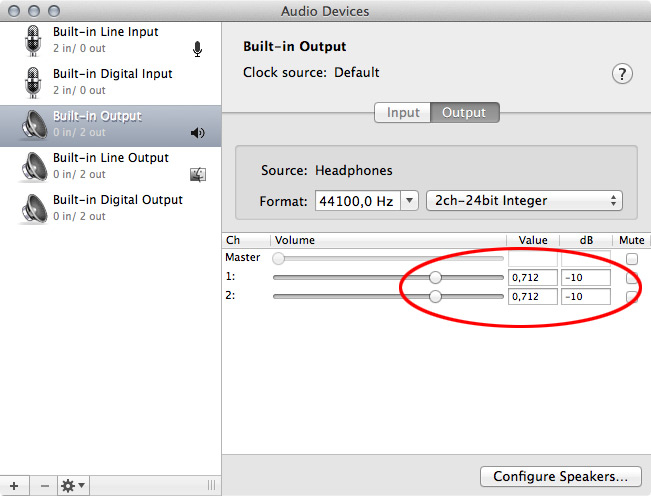 And here, the input settings (note the change of format from the default 24-bit integer to 16-bit integer): 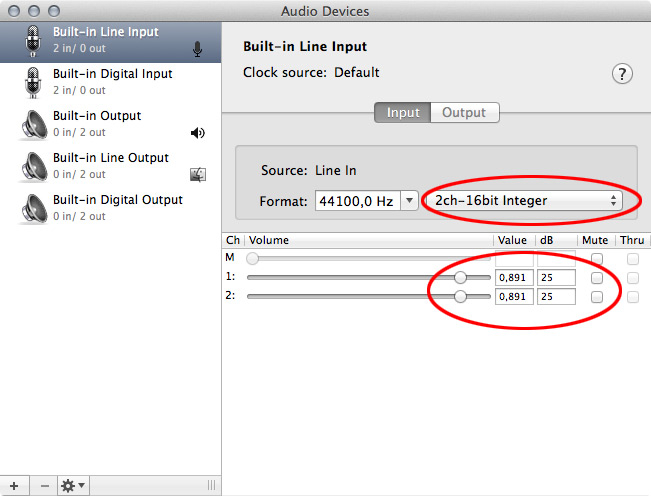 It's hard to say if what made it work was changing to 16-bit input, the input level or a combination of both did the trick, but it worked for me.

A couple of questions:

1) given that I've now been able to read the contents of many disks (which wouldn't boot), but after booting from an eDOS disk (I suppose this is something similar to DOS 3.3) which I made from ADTpro, is it possible to store files on a disk WITHOUT DOS on it (to save room)? If so, that explains why so many disks seemed "unreadable" and "damaged" by me (and good thing I didn't just give up and reformat them all!)

2) Which disk image do I need to download in order to create standard DOS 3.3 disks? There are so many disks at the Asimov site with similar names.

3) Assuming files on a disk are usable with other computers (i.e. text files, MIDI files etc.) is there a way to extract them from the disk images (.DSK) I've transferred (via ADTpro) over to the Mac? Do I need to use an emulator such as "Virtual ][" which I have a demo version of) first, then somehow extract the individual files from the disk image?

I really hate that you have to come up with some sort of 'subject' on this site just to reply  (and that you can't edit) ha.  But anyway...no, on the AsciiExpress site you don't have to have anything going "back" to the browsing computer or phone. It's really just a WAV file that plays.  I usually keep the output level about about 75% and never have issues.  I load all sorts of things both disks to create and files just to play using only the headphone port on the iphone to the casette "in" on the Apple IIe which I think shows an outward arrow due to the oddness of the nomenclature of the day.  ADTPro only seems to have the one Mac version for me ( I don't have a Windows PC other than my 10 year old laptopwith Windows 7 that Im not even sure boots anymore) and ADT pro's listening side (mic-in) doesnt seem to work on this 2012 MBP - it doesn't have a mic input and I got a USB adapter but it seems to not work for ADT Pro... but the Ascii site works fine with just the audio out connected the the Apple IIe casette in using the phone.    But it definitely doesn't work with my Macbook - only the phone and ipad running IOS 10, and was also pretty particular about the cable...  You can email the Ascii Express guy from the site - he's really nice and has even uploaded things to the site for me since ADTPro doesnt work for me and knows a lot about Apples and how to make things work.  His name is Egan.  I wonder if its RAM related there as well....hmm

I've never used it for anything but listening to music through headphones as far as I can remember so I wasn't aware of the fact that there's no mic input, but.... researching it a little online I found that some Macs have a combined in/out jack, and depending on the specific model this might be what you/us both are dealing with here.

This forum thread discusses it in more detail. Maybe that info will make it possible for you to use ADTpro (audio) with it like I've successfully done with my Mac Pro?

Ah interesting.  I'll have to check it out!  I always assumed it was just the headphone output as thats what the icon shows and I do know it has a built in mic.  Maybe a patch cable with a 3.5mm on one end and three RCA jacks on the other (stereo red/white) and a mic might work.  I think I have seen those before but will need to look around or make my own to try it.  I just know the cheap USB adapter I bought doesn't let ADTPro work with the mic input - even with no cable attached looking in the Sytem settings on the audio screen the mic levels constantly ump up and down all the time with that USB device attached.   However for ASCIIexpress, I can definitely say this MBP has never worked with my Apple II on that site.  Sometimes it beeps but that's all, somtimes it beeps followed immediately with an ERR message on the A2, and other times garbage in hex on the A2 screen.  So I gave up using the MBP with the disk and file server site and just switched over to that old iPhone and just leave it attached all the time since it's not an active phone and I only use it for that purpose.

I'm very happy that my ADTpro setup now works, although each disk transfer takes 10 minutes. I'm considering getting a USB to serial adapter to speed things up, but taking care not to get one of the cheapo Prolific chipset-based ones the ADT instructions warn about, but instead use one with a FTDI chipset. Is that something you've considered?

Now that I think about it I might actually have used my A-jays handsfree headphones with my Macbook Pro for use with Skype. But that's a low level mic signal and I wonder how a high level line signal out from the Apple II would work -hopefully just keeping the mic input level on the Mac will do.