I got my Apple ii plus up and running and ordered a capacitor replacement kit for the power supply. I was getting ready to start the work and when I opened the power supply, I found it to be prestine. I understand the capacitors can leak and dehydrate over time. But I also am having trouble convining myself to fix something that aint broke and looks perfect.

So before I do anything, I just have to ask: do I really need to do this? 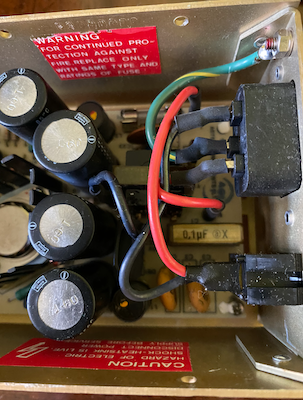 No, you don't need to replace them unless they are faulty. But they may not behave electrically as designed after many decades in storage. Specifically, their electrical leakage may be higher than it should be, because after a long time without power, the aluminum oxide layer that forms the dielectric (microns thick) may have partially dissolved. They may also be physically leaky because the rubber seal has dried or shrunken and electrolyte fluid has seeped down the legs. This is not always obvious because it can be hidden by the shadow of the cap itself. Lastly, they may have partially evaporated the electrolyte, which "drying out" will increase their series resistance and make them heat up more in use. Most often there is no outward sign of any of these, although sometimes leaked electrolyte travels over the board and turns traces from copper to green.

The way restorers deal with the first problem (if the original caps are high-quality, as they are here) is to reform them, a simple process but one that normally requires desoldering the capacitors. A variable voltage power supply, a resistor chosen to pass around 10 mA at the rated voltage (of the capacitor), and the cap to be reformed are connected in series. Then the supply is turned on, and the voltage drop across the resistor is monitored. The voltage across the resistor is proportional to the current in the circuit (the capacitor's leakage). If after several hours the leakage falls to around 10 µA, it has been successfully reformed.

The other problems (leaky rubber seal and high ESR) aren't fixable and they should be replaced.

The big boxy yellow colored on marked 0.1pf X should at least be replaced because if those fail they are very smelly and gross to clean up.

The electrolytics look fine, but if you decide not to re-cap right away I'd check again after some usage and see if any signs of bulging or leaking develop.

The big boxy yellow colored on marked 0.1pf X should at least be replaced because if those fail they are very smelly and gross to clean up.

The electrolytics look fine, but if you decide not to re-cap right away I'd check again after some usage and see if any signs of bulging or leaking develop.

If  a picofarad capacitor blows up or goes bad, it must mean it is the end of the world.

Treat yourself with an ESR meter and measure the values of the capacitors. You will not regret owning such a tool.

Replace the film capacitors regardless as they will most likely fail if they haven't already.

Take a close look at the yellow RIFA capacitor.

If the plastic casing has small cracks you should replace it immediately.

If it's an old one it will have cracks and it will blow up sooner rather than later.

A good one has no cracks in the plastic casing.

Example of cracks (just a random cap, probably not the same as in your psu): 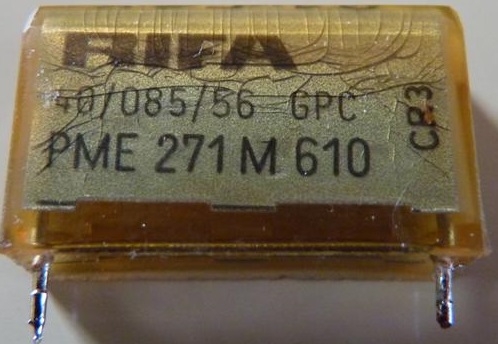 Thanks everyone for the feedback. I did replace the 0.1 µf (micro farad) RIFA capacitor and will purchase an in circuit capacitor tester before I mess with the others. 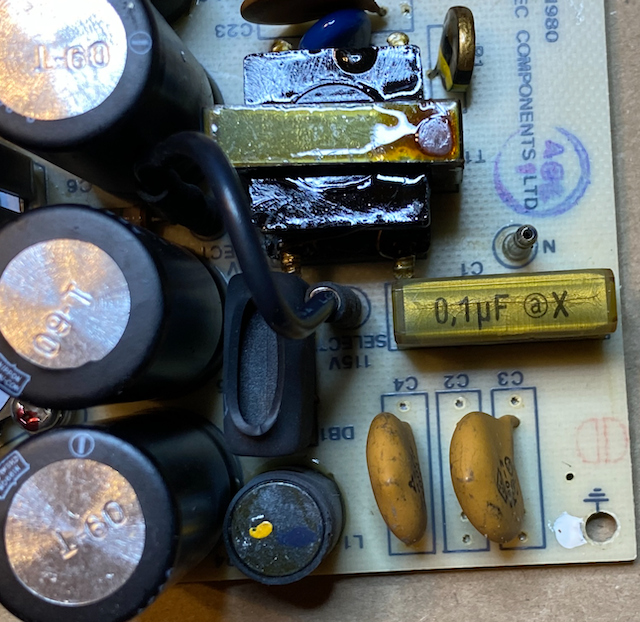 Here's the cap removed (super nice there was pre-drilled holes for the narrow spacing of the new cap): 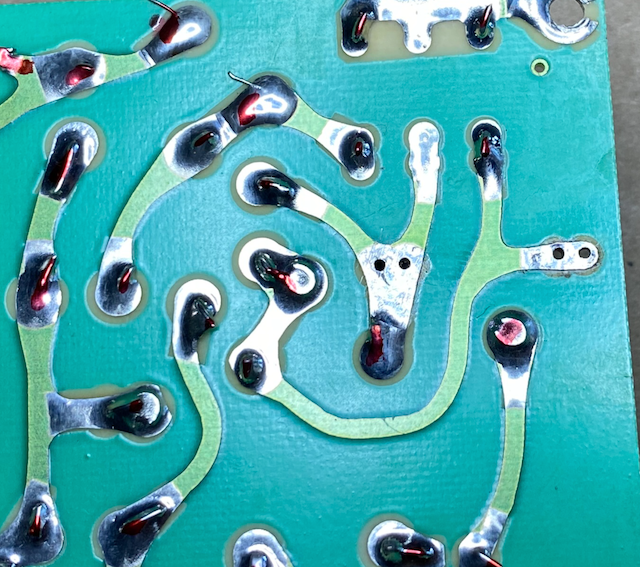 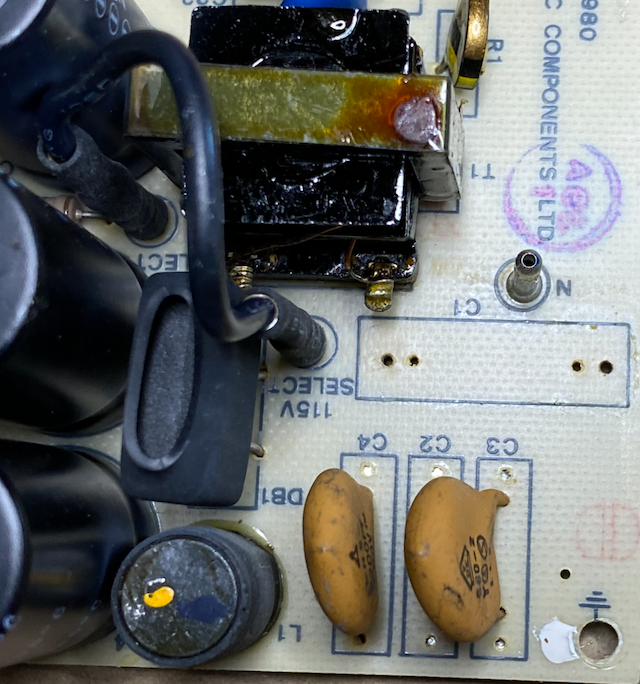 And a view of the new capacitor: 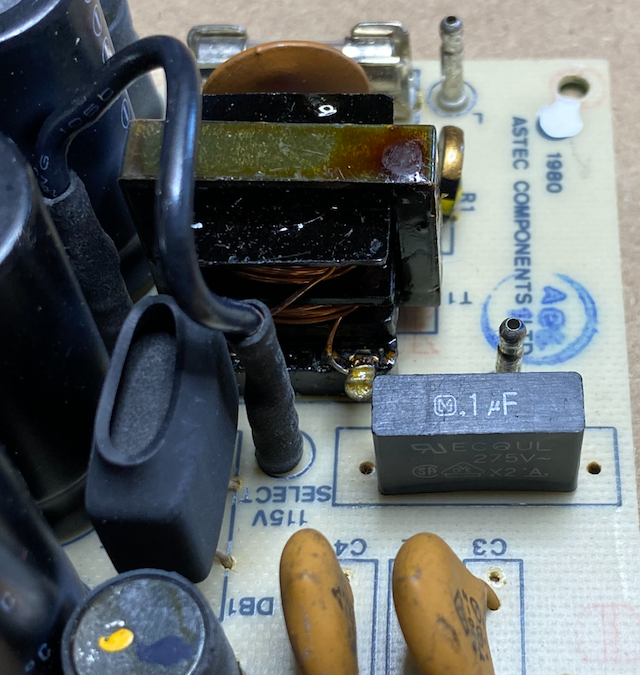 I did a load test with about 0.5 amps of load and the +12 volt supply did dip from about 12.9v no load to 11.4v with load. Any reason to be concerned with that drop? (the 5v supply stayed >5v with a load.)Also, anyone recommend a good make/model of in circuit capacitor tester?

IMO, if you're going to spend the time trying to test the caps, you might as well replace them. Also, you'll be amazed at how much smaller the new ones are. Not to mention, the originals were all 85c. Replacing with 105c caps should last even longer than the originals.

Ancidotaly, I just recapped a IIe supply that based on the sticker was from late '84. I scoped the rails (unloaded) before and after the recap. I did see a slight decrease in noise on the positive rails (which weren't that bad to begin with). But I also saw a slight increase on the negative rails. I don't really understand why the negative rails would get slightly worse. Unloaded voltages also increased just slightly. But remained about the same before and after when hooked up to the motherboard idling.

Personally, anything older than 30 years old I like to recap as preventative maintenance. Coupled with the fact my eyesight and motor skills are still good now. 10 years from now, who knows what they will be like. But at this point at least I can comfortably say capacitor issues will be the next guys problem, not mine.

But ask 10 people on how they handle this situation, you'll get 10 different answers

Also, anyone recommend a good make/model of in circuit capacitor tester?

I have used the EDS 88A CapAnalyzer II with success. Note that it comes with instructions that must be kept in mind because it is not a "point and shoot" instrument. A somewhat lower-cost alternative is the Anatek Blue ESR meter, but it also requires careful technique to use. Another choice would be the Midwest Devices Capacitor Wizard, a slightly larger device. Also note that some common "LCR meters" like the DE-5000 and the U1733 can't be used in-circuit.

Many multi-rail power supplies do not regulate each output voltage separately, but only regulate the "main" voltage, and derive the others from it. So if you only put a load on one of the other voltage rails, it will sag from a lack of load regulation.