Has anyone ever cracked open one of these bricks to see what's in them if someone needed to repair one? I have a spare one in working condition. I'm thinking about opening it up and seeing what's in there. I imagine at the minimum there is a transformer, diode bridge, and a filter cap (that eventually would probably need to be replaced).

I came across mine recently but I still bought the Toshiba replacement that Professor Stephen Buggie sells on eBay, as much smaller, weighs less and more convenient to deal with

the white brick is sonic welded, and impossible to open without scarring or destroying the shell. 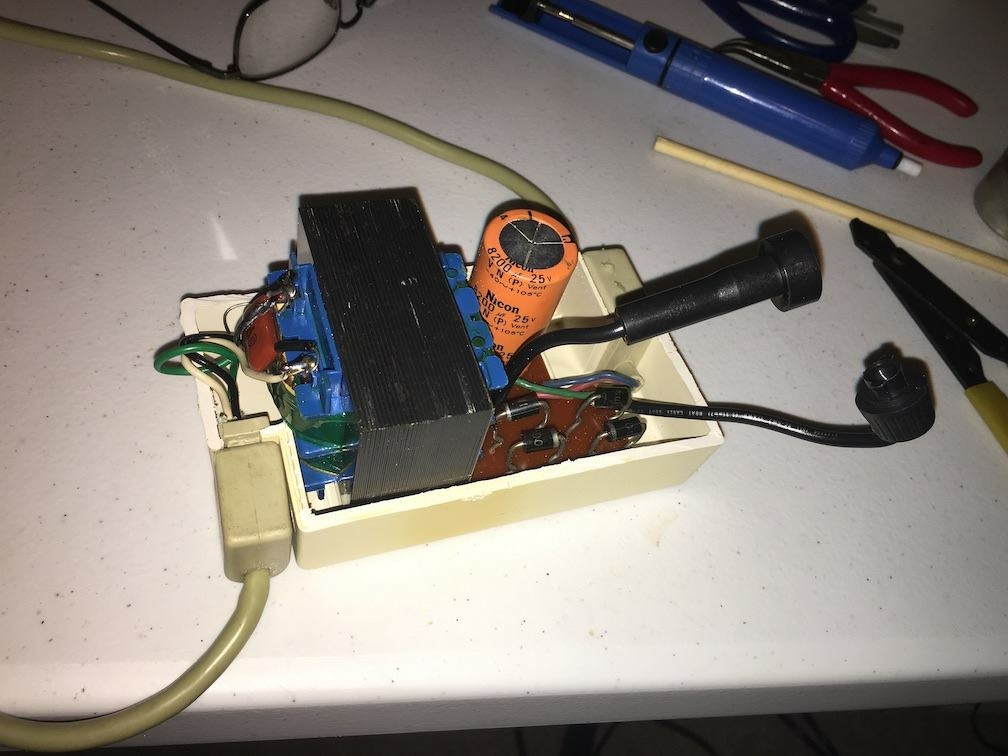 Yeah, I'm aware its sonically welded.  Not the first time I've had to crack open a sonically welded brick.  I had a ColecoVision power brick (it has circuitry built into it to do +12, +5, and -5) start acting up that was also sonically welded I opened up to repair.  A hacksaw blade often fits nicely into the grove and gives you a fairly clean cut.  So I cut open the //c brick this morning, and tellmer's description is pretty much spot on.  I did nick the 8200uf cap (which I was planning on replacing any electrolytics anyway), and a little bit of the transformer iron (which shouldn't hurt anything).

The transformer is stamped DVE2985.  But a quick Google search gave not very useful results.  So it's hard to say the exact rating on the transformer, if it needed to be replaced.

On the secondary of the transformer, there is a small ceramic cap between the ends of the winding.  It's marked 103M.  So another .01uf with a 20% tolerance.  No indication of a temperature coefficient or anything else.  But probably not critical in this location.

The rectifier bridge bridge is made up of four 1N5401 diodes.

There is also the aforementioned 8200uF 25v cap.  Mine happened to be a  Chton brand.  Not my first choice in quality name brands.  But at least they used a 105c cap, which is better than thte 85c caps that are usually used to save a few cents.

And there is a leaded fuse soldered in.  its rated for 250v, but unfortunately the amperage rating is face down on the board, and I can't make out what it is without desoldering it.  I may do so when I replace the electrolytic cap, just to document what the rating is.  Looks like it is a slow-blow style, I think.  Looks like it is also marked 315.  Which if this happens to be a Littlefuse, and they haven't changed their numbering since the 80's, would indicate it is a slow-blow.

Of the components in there, the most likely to need to be serviced at some point would be the electrolytic cap, and the fuse (if it blows).  Maybe the transformer at some point down very, very  long down the line, but they are usually pretty solid as long as you don't some how feed them the wrong mains voltage in.  The ceramic cap, diodes, and film cap should last quite a while.  But may be worth swapping out the film for a proper X/Y cap, if you have to open it up for another reason.  I wouldn't open one up just to do that though.

I think in the other group where I found the picture (FB group) someone mentioned it was a 5 amp fuse...although if it were to blow of course you would want to desolder it so you could read the edge to be sure.  Is your's not working or were you just more curious what was inside?

It was a spare I've had for a while.  I knew at a minimum there was an electrolytic cap in it that after almost 40 years is nearing the end of a reliable lifespan.  If I replace this one now, It will last the rest of my lifetime.  But also a little curious exactly what was on there, and how repairable these are if one should fail.

As for the fuse, 5A seems a bit high.  According to the markings on the bottom of the brick, the output is rated at 1.2A.  a 3A fuse in that case is much more reasonable than a 5A.  But I'll check it for sure when remove and replace the electrolytic.

the white brick is sonic welded, and impossible to open without scarring or destroying the shell.

If it is dead, the scarring the shell, and then plasti-welding it closed when repaired is not an issue. :)

This is not entirely true. You can convert the //c+ to use the brick if you truly want battery power, and you could also be even more clever, and replace the internal PSU with a battery pack that can supply + and - 12VDC, with 7805s to drop down to + and - 5VDC, and an external charger.

This is not entirely true. You can convert the //c+ to use the brick if you truly want battery power, and you could ...

I have 3 Apple //c's modified to run my UniDisk 3.5 and with the Prairie Portable Pack and its dual-6 volt Lead-Acid rechargable batteries (in series) for portablility.

The LAB died many years ago and I do not bother replacing it as I have other althernatives for portable power, that also weigh less. 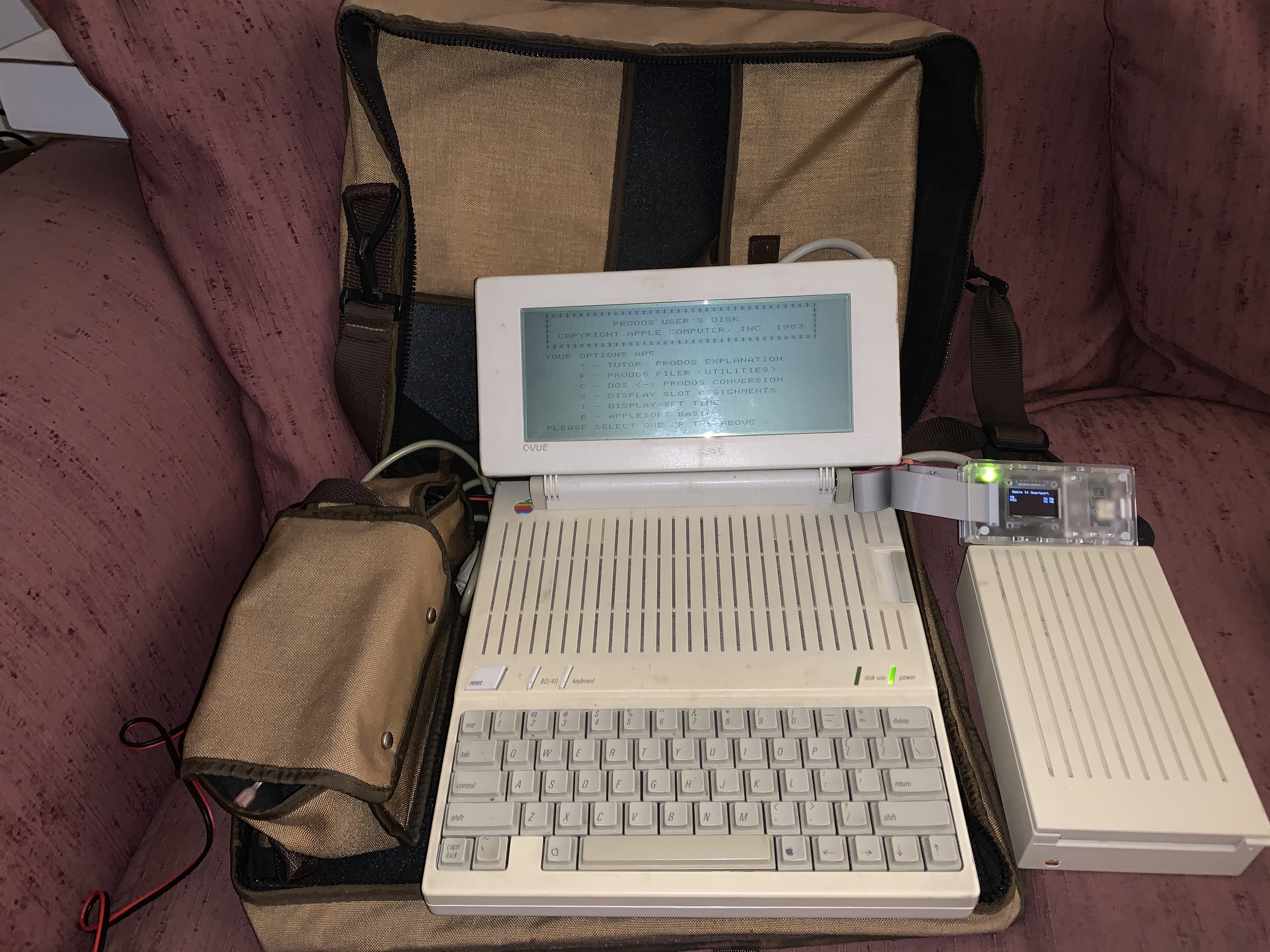 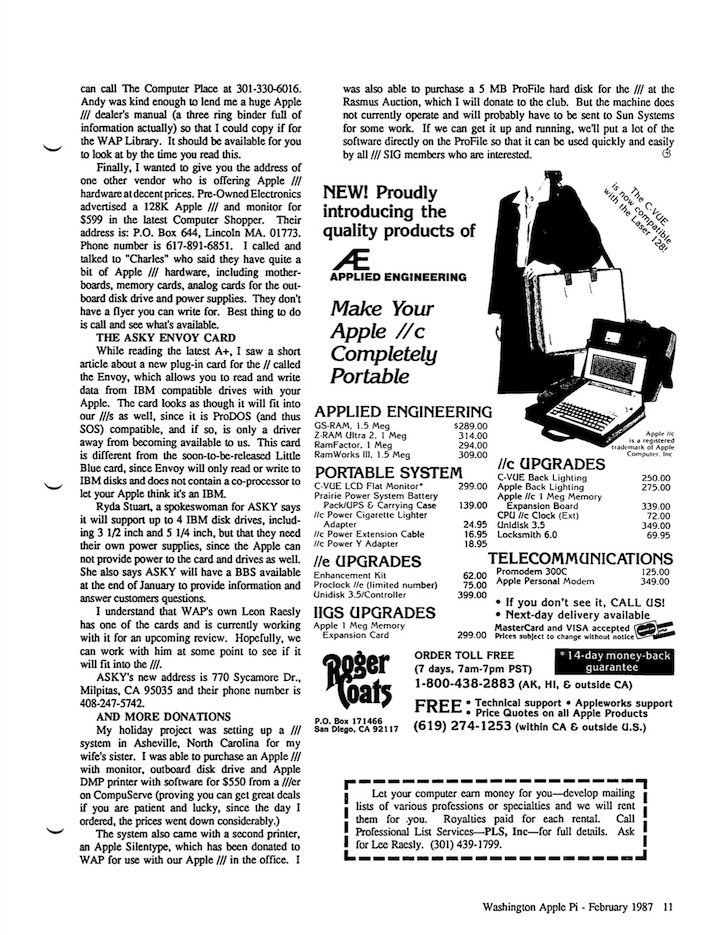