I found the Apple //c diagnostic disk image a while back.  I tried running it on my //c, but never got much out of it.  Apparently it is meant to be used in conjunction with some service manual and a loopback cable.  But I've never identified which manual it is.  If anyone knows for which manual and where to find a copy, I'd be interested.  But I did manage to acquire an offical Apple loopback cable for the //c, part number 077-8148.  Now I can actually go through the diagnostic disk successfully.  As I can't find any documentation on this, i figure i would document it here if anyone is interested.  If it is documented somewhere and I just couldn't find it, my apologies for duplicating it.

When you boot it, it goes through several different screens of patterns.  I assume at this point it's running a RAM test.  But I'm not entirely sure.  Then you come to a menu to select your language.  After that, it gives you basic instructions about how this is meant to be used with a technical manual, and if the results match the manual, press the space bar.  If they don't, press escape.

If you continue, then it shows an icon of what looks like a simple logic circuit, and then if the loopback is not plugged in, shows an icon of the //c with what appears to be the loop back connected in the back with a flashing question mark.  Pressing space here goes back to the logic circuit symbol, and it puts an X through it and shows number 570.  I'm assuming that is an error code of some kind that you could reference in the manual.  If you have the cable, then it will slowly make clicking sounds in the speaker that pick up the pace until they are vary rapid.

Then it will automatically move on to a speaker icon, where the speak keeps outputting 6 tones from low to high over and over until you hit the space bar.  Then it shows all the characters and mouse text.  And it alternates from real clear, to slightly fuzzy on my color monitor.  If I hit the white switch, then the characters stay perfectly clear all the time.  Not sure if its switching back and forth between a text and graphic mode here?

Pressing space here then puts you in 80 col mode with 9 rows of numbers across the screen.  Pressing space bar then brings you to the 16 color bar pattern.  Pressing space again and now it displays 5 kind of grids of color bars in the top third of the screen.  Down below, every 2-3s a large blocky number alternates 1 and 2.  I'm assuming its alternating the two graphic "screens", and Ideally you would see no change in the grids between the two as it alternates.

Pressing space again gives you an 8x7 grid with a 1 and 2 alternating in the upper left square.  Again, I'm assuming its alternating both screens and you should see no change between them.  The next test isn't really clear what its doing, or what I should expect.  But I get two 8x7 grids that are on top of each other.  They match vertically, but are off set slightly horizontally.

Pressing space again moves on to the disk drive test.  And the drive kind of starts to go crazy.  I originally ran the test off my Floppy Emu, and it seems lie the stepper was going from the outer track to the inner track, then back to outer -1 and back to inner -1, then outer -2, then inner +2, etc. very rapidly till it landed on track 19.  Then at this point it wrote something and gave  me a flashing question mark showing an icon of me inserting a disk.  So I figured it must need a real disk, so i wrote one out and repeated the tests.  With a real floppy in, it now does a drive speed test, where it shows a scale, and the only number is 0 in the middle.  there are two shorter bars off to either side with no number and it periodically flashes a number with an arrow pointing up.  If it is outside the bars, it beeps.  If it is inside the bars, it is silent.  The bars seem to be 30 and -30, as my drive was bouncing around -27 to -32, and it only beeped on -30 to -32.  Then it continues with some other test for a little bit, then beeps showing a a picture of the disk ejecting.  then when you eject the disk, it changes to show you putting it back in.  I think it's testing the write protect sensor at this point.

Then it automatically moves on to a keyboard test, where it highlights certain keys on the screen for you to press.  Once you press those, it highlights different ones, until you have pressed all those, and then high lights more, etc.

After that it brings you to a 6 option graphical menu where you have a mouse cursor or you can seect by number, all the tests you just went through plus a new test for a mouse or paddles.  The paddle test has you rotate each paddle for the full range, and press it's button.  Once you do it for both, it ends the test and brings you back to the menu.  With a joystick, you accomplish the same by just moving the full X range and the full Y range, and press both buttons.  For the mouse test, it draws a small box near the upper left, and you have to move the cursor to the box and click it.  Then it repeats by putting boxes in the other 3 corners and center.  Then the test ends and brings you back to the menu.

I'm having a little trouble tracing out the loopback cable to be 100% sure of the pinout.  But it seems like its pin 1 to 5, 2 to 4, 3 to nothing, 4 to 2, and 5 to 1.  So basically a mirror image, with nothing connected to the middle pin.  But that seems to match up to the with the pinout I found, basically tying the handshake in to the other handshake out (and vice versa) and tying data in to out, and out to in (and vice versa).

Thank you for your effort.

Maybe it would be a good idea to show a photo of the loopback cable.

Also, do you have a source for the diagnostics disc (or be willing to share a dsk-file from it)?

The floppy image is up on Asimov:

I also tweaked my drive speed to get it in the good range, and I think the diagnostic now just does the disk speed test in the background and only presents the screen showing the values if they are falling outside of the good range.  It seemed to jump directly to the write protect test the last time I ran it.  It would be nice to see the actual manual for it to know exactly what its doing.

The cable isn't anything special.  It's a maybe 14" cable with the 5 pin DIN connector on both ends: 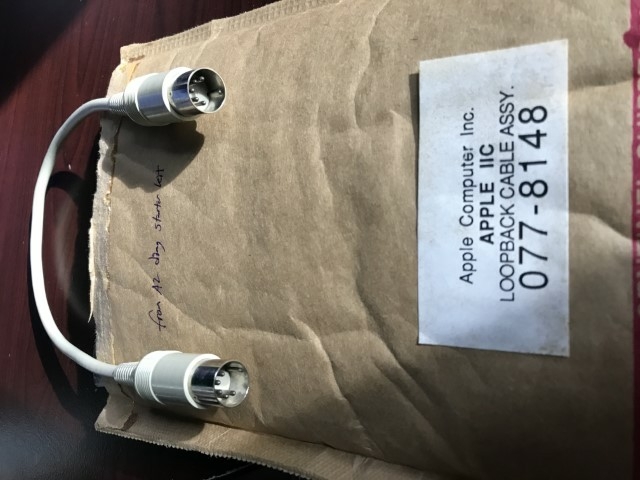 Thank you for the information.

I am in the process of making a spare parts list for the Apple II series, which I also plan to get online (TOR-network) when it grew a bit.

May I possibly use your photo for the list?

pcbastler wrote:I am in the process of making a spare parts list for the Apple II series,

You know this site?

That's my collection of information.

No, I did not know your site... for ASICs and ROMs I used to look at http://applelogic.org/APPLEASICs.html - I want to build up something simular with misc spare parts...  so if you have i.e. a clamp in hand that you can take a quick look and see what purpose and what system it is for.

I know that's a giant project, but every site started with one html-page ;)

Did you ever find any documentation on the IIc Diagnostic Disk 077-8125-A and Loopback Cable ?  I spent some time with a couple old PC keyboard DIN plugs and built the loopback cable and get the same initial results.  However after the big X'd out "570" error, I go nowhere.  Nothing!  The machine just freezes up. 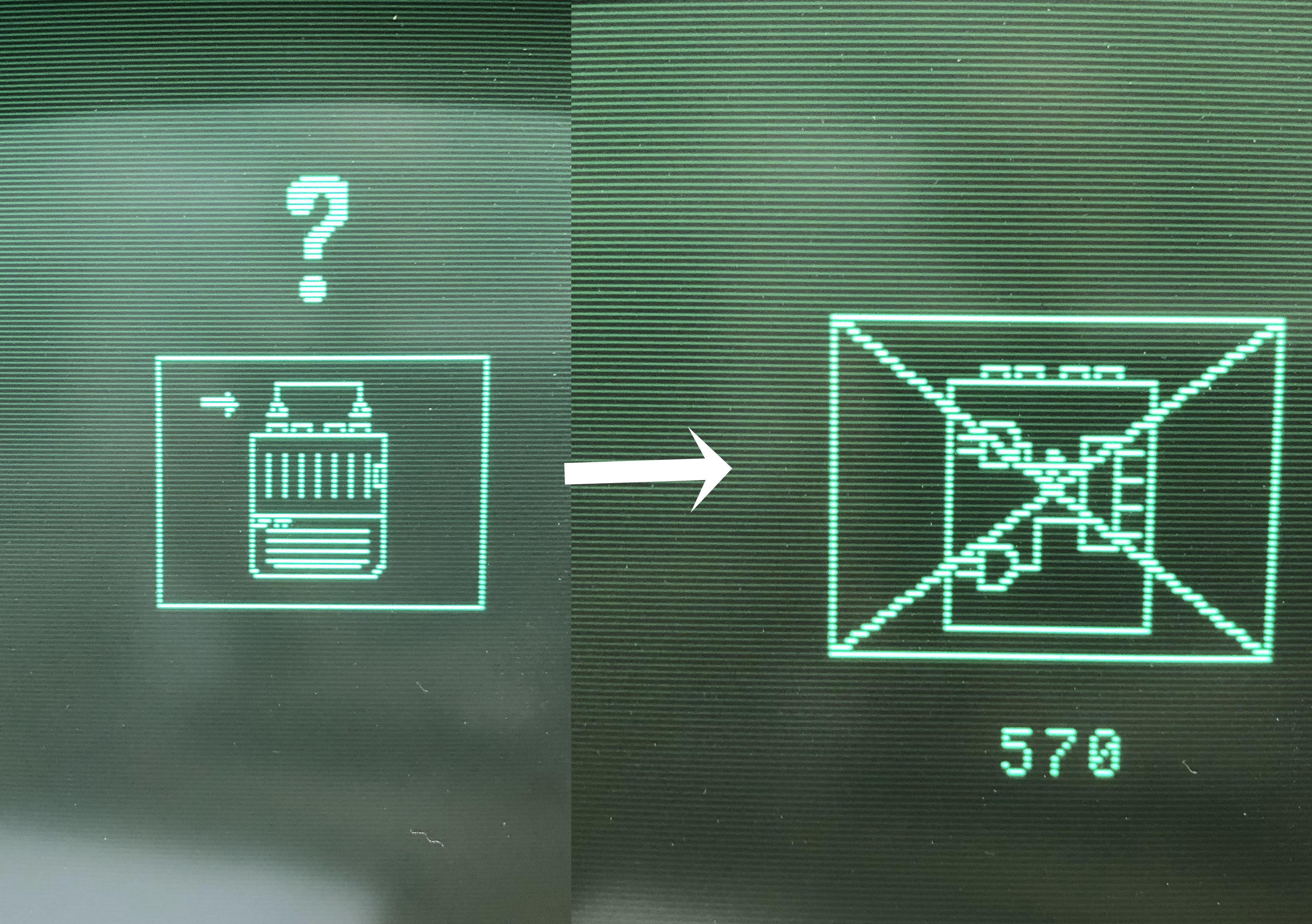 No, never found any documentation. Although if you built the cable and it's stopping at the 570, that sounds like the cable might not be built right. I've also found that unless you have the original 255 rom, this diagnostic won't work either. It will fail when when it tries to check the rom.

I have since learned that there is a newer version of diagnostic for the //c that does not require the loop back, but can optionally use it. It's just incorrectly labeled as IIe only, when in reality it switches between e and c mode depending on which computer it's run on. It's much more user friendly and you can select tests. I'd recommend using this one instead.