So I recently acquired a bunch of Apple gear from an estate sale.  Some of the items were so clean they almost looked new.  Of course I don't know their functional status yet.

There are some cards here I just cant seem to identify or if they are marked, I can't seem to locate any information about them, such as manuals.  In addition, some (I have duplicates) may be up for sale once I have figured out what they are.  Pictures and information below.  Any information is welcome.  I'll share more as I explore more of the cards.

First card is a Moose Head Inc. Quad Card.  It looks to be a printer card of sorts with a 25 pin serial and centronix cable attached.  I have had no luck finding any references on Google to a Quad Card or Moose Head Inc from Cody, WY making cards for the Apple II. 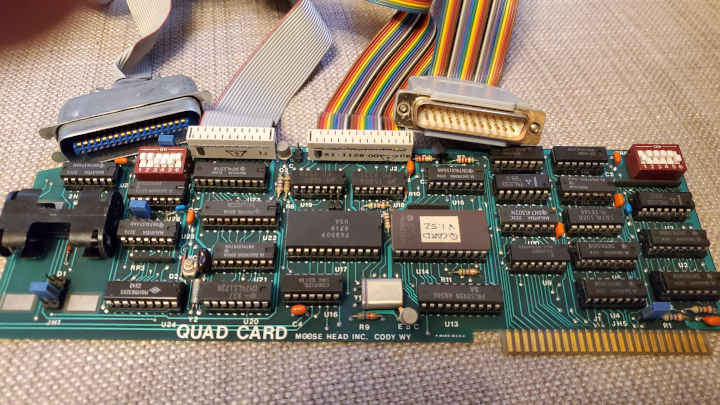 Second Card is a no-name brand Saturn 128K RAM compatible expansion card.  It is my understanding the memory chips used in Satrun cards are 4146 chips.  These cards obviously don't have the memory chips so anyone with a lead on some let me know.  I have three of these.  Let me know if you are interested in one.  Looks like they go for about $60 on eBay with chips.  Reach out if you have an interest. 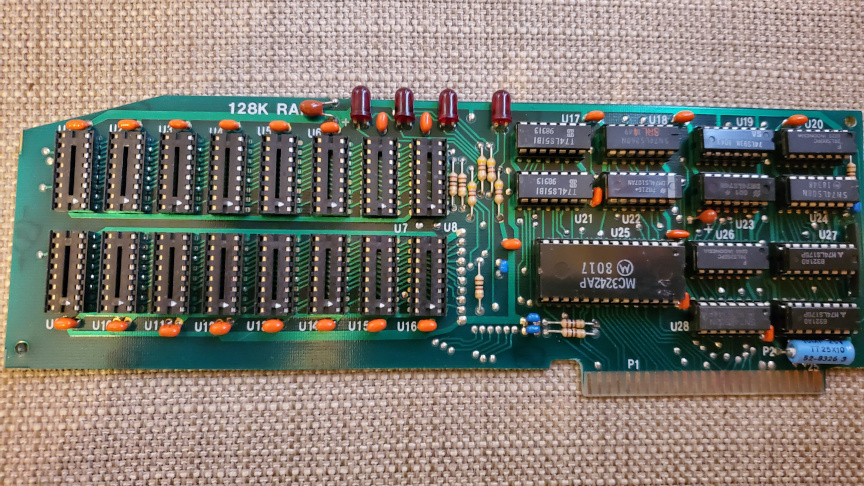 Third Card is an interesting one.  The closest thing I can find online that is similar is a Wild Card.  From what I found, the Wild Card does a memory dump to disk when you push the button.  If I am correct, you boot the machine as usual and can back up the loaded application to disk by pressing the button. 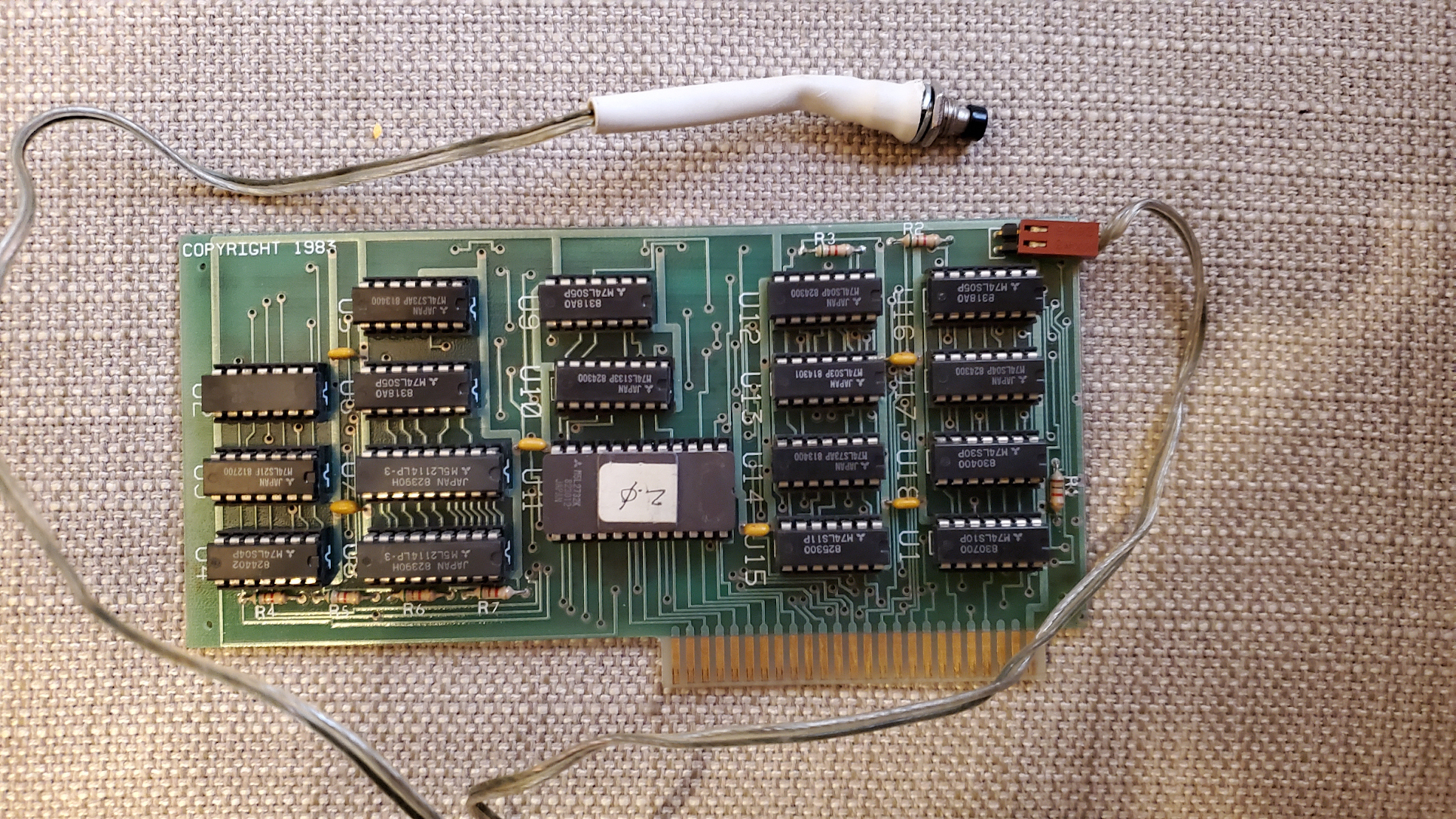 I think that the Quad Card is named so because of  four functions:

- and the forth function? I cannot recognize the chip on position U16. A clock generator for the 6850 or something else?

I've PMed you about your Saturn card.  If you're willing to part with one I'm ready to buy.

The last card is indeed a Wildcard clone.

The button just generated an interrupt and put you into the montior.

From there it was up to you and your machine-language and Monitor skills to save the contents of memory to disk and hope for the best.

Useful back in the day if you were trying to crack software, although I'm not sure how useful it is now.

I agree with Ralf, the Quad Card looks kinda like the Mountain Hardware CPS Multifunction card.  The three functions I know of for sure are 6850 (slow) serial, centronics compatible parallel and clock.  I don't know what the 4th function if any on this card is.  Without docs for the dip switches it may be interesting to figure out how to use it.  A dump of the EPROM would be interesting to took at.  The serial part is really only good for slow devices like printers (even a little slow for driving a laser printer if you are doing much graphics) or 300 baud modems.  You will be hard pressed to see 1200bps throughput with a 6850 because it has no buffers at all.  There is a reason the 6551 based SSC was called "Super".  It could actually do 1200 and 2400 without throwing interrupts all over.  State of the art back then.

On the Saturn clone cards the RAM chips are probably 4164.  I assume 4146 in the original post was a typo.

The revised post about the Wildcard clone is correct, the EPROM on there has software on it that facilitates writing the RAM contents to disk when the button is pushed.  A little menu pops up and you can do a few things.  These days as noted these cards are more of a historical curiosity than anything else.

So I was curious about the Quad card and tried a little google action. My terms were "moose head" "quad card".

Lots of hits but all but 2 are strange little spammy web pages that suggest "C&C network for a virus" or "Bizarre SEO pages".

Would  love to know more about the mysterious "Moose head Inc" of Wyoming.

Some ideas belonging to the DIP switches: there are several sources for interrupts which can be routed to /NMI or /IRQ or can be disabled. Beside the RTC are some jumpers. I can read "INT".

Probably you have the choice of different parallel printers and their emulation in the firmware as seen on other parallel cards.

But I disagree with "slow" for the 6850. This chip is able to run the serial port upto 1Mb/sec. Only the baud rate generator is missing. The remaining functions are nearly the same as for the 6551. And to mention the ability of that chip: in the late 1980s I wanted to have a fast serial port and I created my own as a weekend action :-)  This card ran 57600Baud and 115200Baud and is able to run upto 921kBaud:

I was able to run a SuperSerial Card at 57600 Baud just by changing the oscillator. (FYI)

There is a big difference between being able to run at a high baud rate, and be actually able to sustain throughput at those rates.  The 6850 can be turned up to high rates, but on a system like an Apple II, it really can't keep up even at 1200bps if the computer is doing anything else like scrolling the screen or calculating checksums.  In real world use, a 6850 serial card is going to be generating a lot of interrupts and handshaking off a lot in order to avoid losing characters, so the effective transfer rate will be much, much slower than the baud rate the chip is set for.  A 6551 is better as it at least has a 1 byte buffer for each send and receive.  That's still not very good.  That's why later serial chips have large FIFO buffers because to get throughput above 2400bps that is necessary.  Even on much faster processors like the 68000 and x86, without large buffers and handshaking, characters will be lost.  Unfortunately by the time faster serial devices like 9600bps+ modems came out development of cards for the Apple II had largely ceased, so there are few designs that support newer chips.  I had done some work a couple years ago on designing some cards to use more modern serial chips, but there was little to no interest in that.  Nay sayers aid nobody wants to run faster than 2400bps anyway which is what a Super Serial Card is effective for, and that unless a new card was 110% Super Serial card compatible (pretty much impossible to do), nobody would want one because it might not be compatible with all old software.  And that since there were too many SSCs and other cards out there nobody would want to buy anything new anyway.

I do agree that the dip switches are likely for what you mention.  But without documentation, it would be trial and error to figure out what they do.

SoftwareJanitor, I disagree with your assessment

I have successfully sent data to Apple ][ at 38.6K Baud using A super Serial Card with 8N1N (no hardware hand-shaking) sendng 8K bytes to memory with zero errors.  This is a repeatable result.  No accellerators were used to do this other than the oscillator change as mentioned.

57.6K is another story.  It works, but did have a lot of errors without hand-shaking signals, and the handshake slowed it down to the point it wasn't an effective transfer at that speed.  But it was all done with a change to the oscillator that feeds the 6551 ASIC chip.

This has been proven on an Apple ][ Plus sending direct to memory. (no screen feedback)

I did this when I made my Super Serial Ethernet Card.

In "former times" I ran my own terminal emulation with the p-System as a serial terminal to an OS-9/68k machine. 57600Baud were ok without using interrupts. Polling was sufficent. Ok, I have to mention my accelerator board runing a 65C02 @12.5MHz. In 1988 :-)  Now I have written some code for running a block device over serial connection to a really fast OS-9 machine (from 1995) which acts as "disk emulator".

...ADTPro uses standard SSC hardware without modification to achieve up to 115200 bps during transfers to and from the host computer.