Pulled the old Apple II+ out of storage and trying to get it back to life. First pulled all the ram and tested it in a specific ram tester, all ram tested good. When I started the ROM at 3410013 E0 had a broken leg so I put it in a socket and soldered the broken to the open pin on socket. I then tested all TTL chips in my B&K chip tester. They all test good. After that we built two ROM test sockets, one to read the 2316 ROMs and one to convert 2716 to 2316, actually I built the read socket first. I then tested all the ROM chips and found that the AppleSoft ROMs aren’t but the startup rom 3410020 F8 had a failure on the secon from the last bit. I guess it is bad so I make the converter adapter and write code to the 2716. That is where I am now. I also tested the chip in the Programer with the two adapters so it would read as tho I were a 2316 and it verified correctly. I now assume all my chips are working except the character generator as when I tested TTL chips I found it has pins 23 and 24 bent under out of socket.

What can we help you with? It looks like you have solved a whole heap of problems.

I take it you have tried powering it up. Do you get any sort of display?

If you have any issues with the System or Character ROMs, you should check out the ROMX thread here.

well skipping strait to the problem at hand I was working on the system and got it back to life and then found that it doesn't seem to want to boot from a disk.  I keep getting someresidual pixels on the screen and all the keys except about 7 work just fine.  I found that at first it seemed that CTRL was pressed all the time and I found that a 74ls00 was bad and causing this problem.  I also pulled all the keys as most of them were not working and put them in an alcohol bath.  While the keys were soaking I used a wire to ground the contacts together on the keyboard to see if they worked and all keys worked with one key being displayed as best I can remenber.  I then populated the keyboard with cleaned keys and found that some of the keys display wrong characters multiple characters actually and other commands.  I also get multiple keys on two.  I then pulled the othere testable chips on keyboard and found the 555 to also be bad and I went ahead and replaced the two 1uf caps and the .1uf caps seemed good so I left them alone.  I don't see how I could have damaged the 2513 when I had pins bent under as one of the pins was the 5v power so without power how could I damage the chip.  I know that I probably damaged the 74ls00 on the keyboard when I plugged it in backwards but I don't see how I could have damaged the 555 timer.

Could my Keyboard problems be caused by the comunication between the 8T28 chips as they would aslo keep the computer from booting off disk.  I also tried to boot off of the apple Disk Server and I couldn't get a load to happen but that could be because I can't get the drive to function properly.  I ordered a couple of the 8T28 chips but should I get a 2513? I guess these are becoming harder to come across.

well skipping strait to the problem at hand I was working on the system and got it back to life and then found that it doesn't seem to want to boot from a disk.  I keep getting someresidual pixels on the screen and all the keys except about 7 work just fine.  I found that at first it seemed that CTRL was pressed all the time and I found that a 74ls00 was bad and causing this problem.

Please post detailed high res photos of the KB, top and bottom, to identify it and to inspect the PCB. 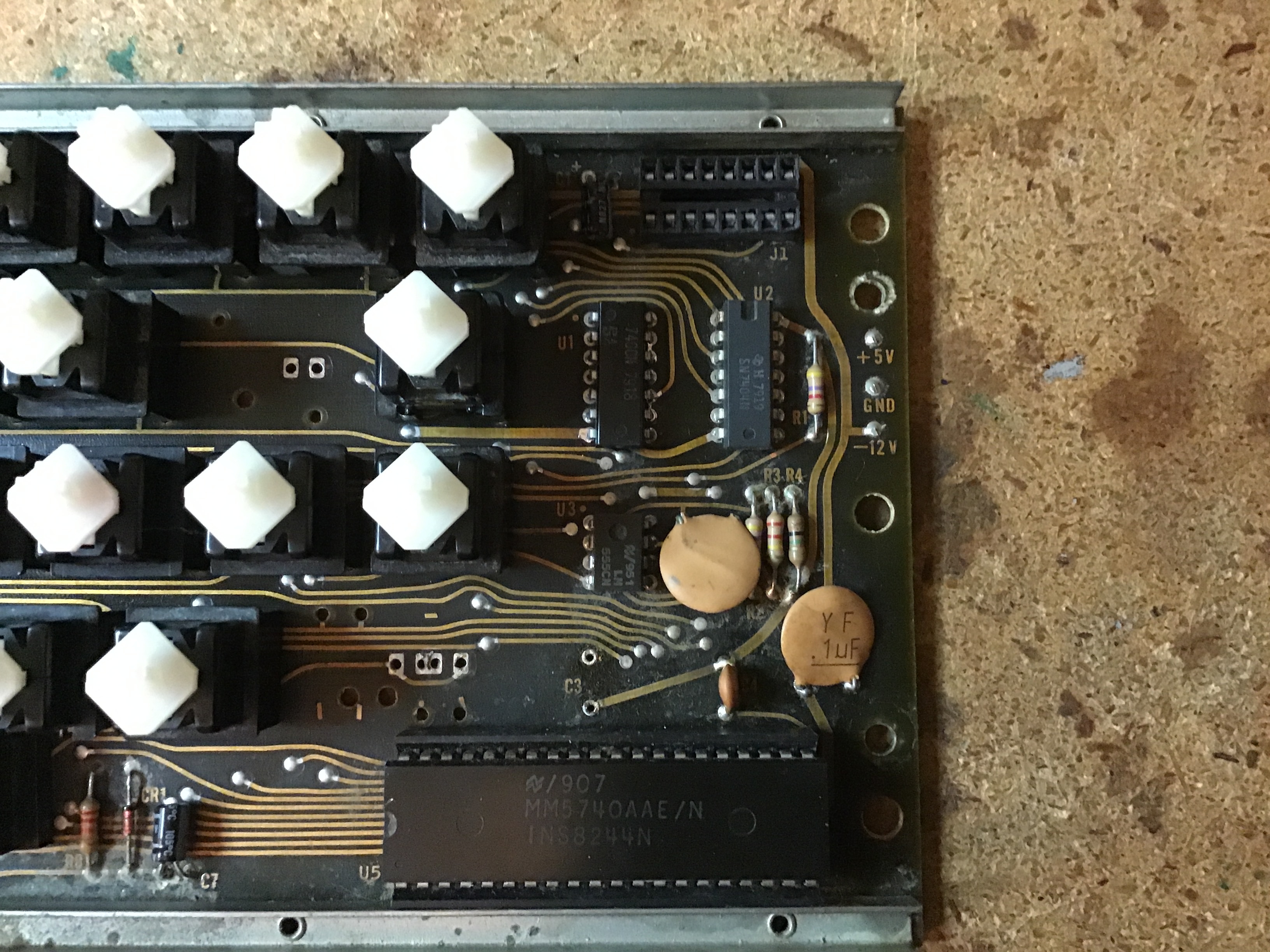 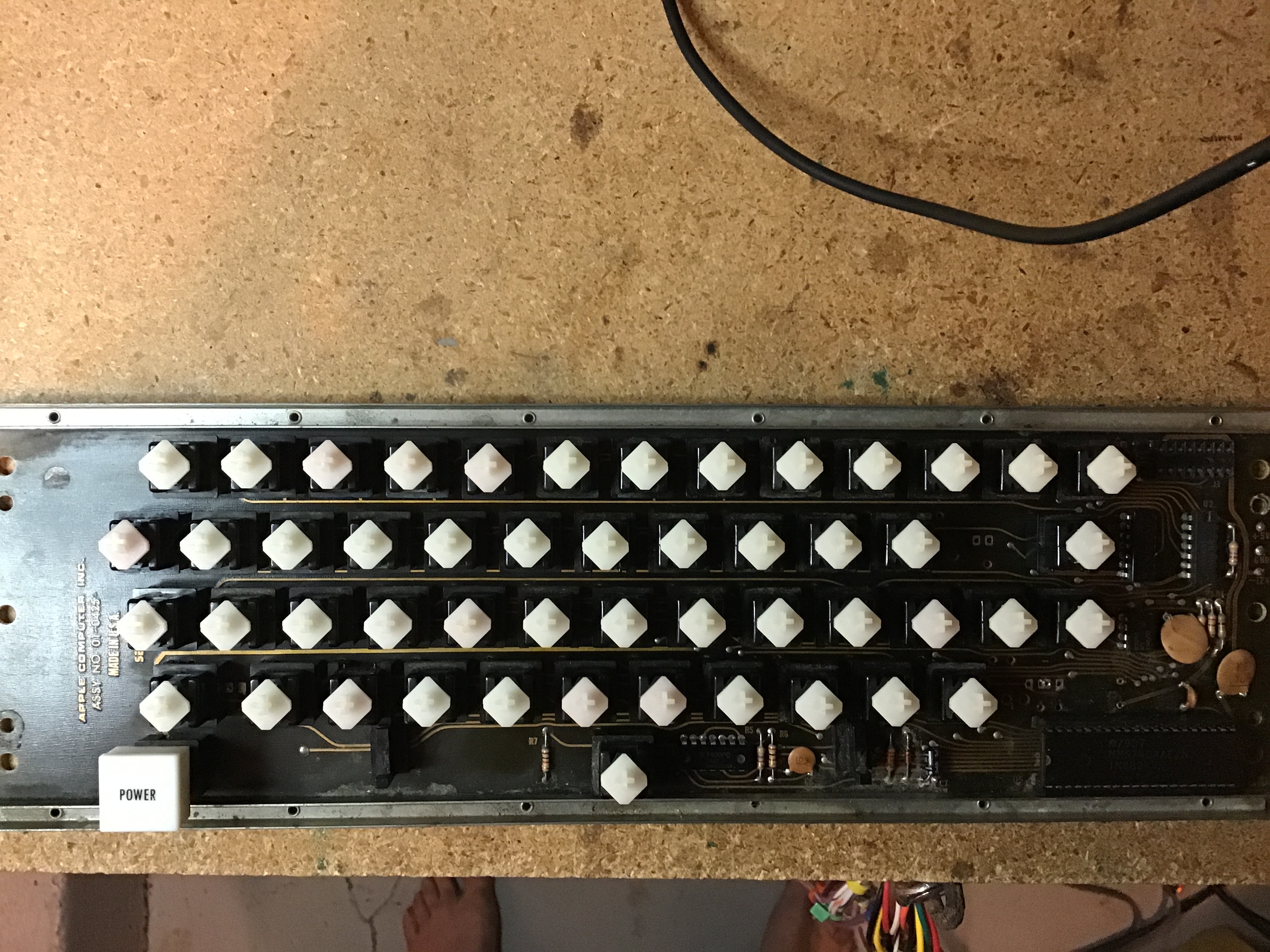 incidentally I'm restoring an Apple J-plus that has the very same keyboard.

About the switches themselves, these are Datanetics DC-50 series switches (mine are Dc-51) that are best described here:

As You might see from the functional schematic,  inside the switch there's a leaf that moves along with the slider (the white plastic actuator that you push) that presses against an actuator when the slider is moved downward and closes a contact.

The problem appears to be that these contacts are prone to oxydation  and the switches no  longer work as they should; mine had almost all key switches faulty.

What I did is the very same thing You did but with one more step.

I revived them all by tearing down all the swithces one by one using a desoldering station and injecting 1cc of IPA alcool with a siringe in each one, 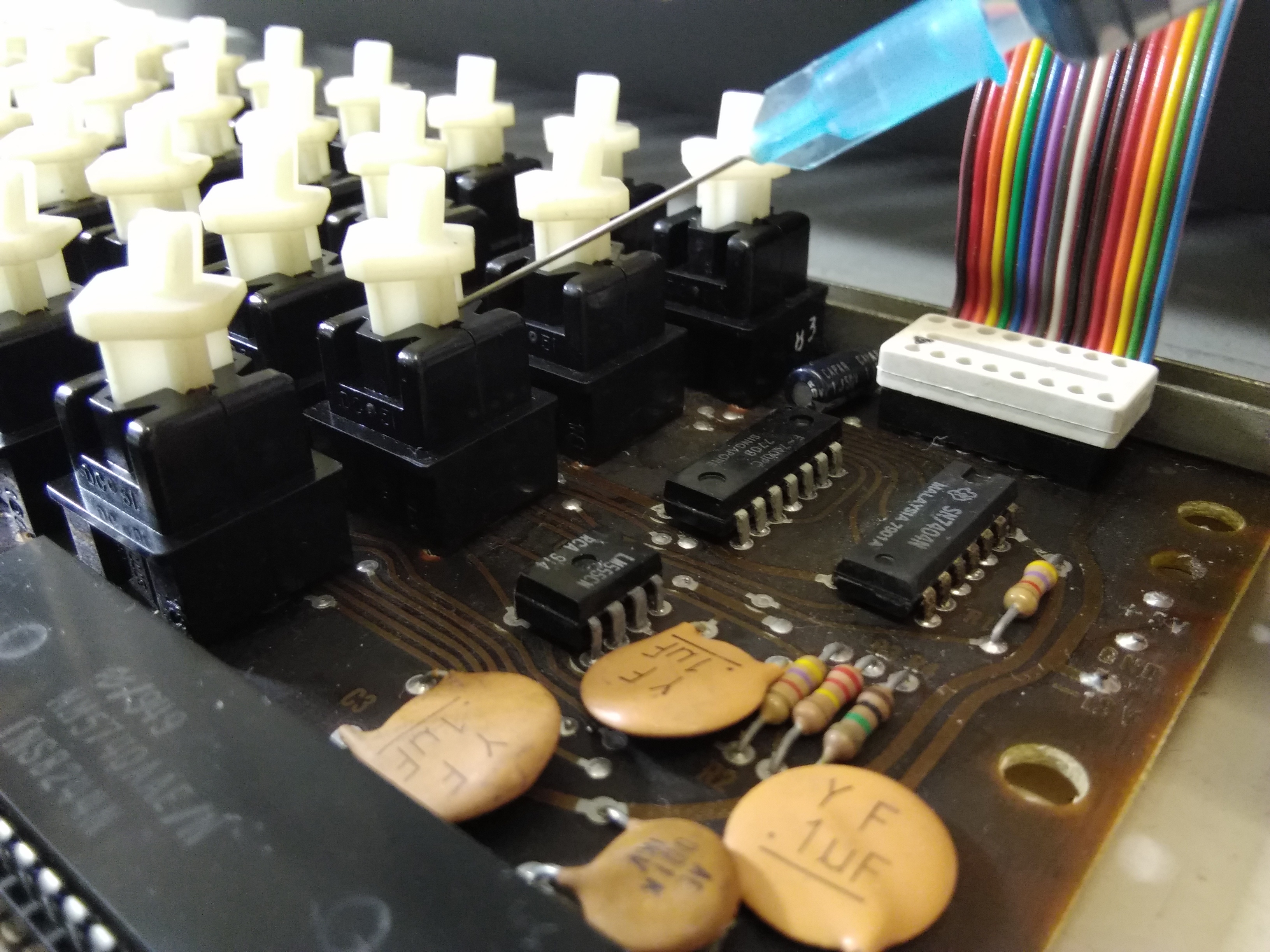 injecting it inside the switch case, as you can see in the example above,  in the small cut between the case and the slider on the contacs side (the side with the soldering pins); I then shaked it vigorously and started activating the slider up and down for as long as IPA evaporated and the contacts worked again. To check it, You need a ohmmeter  and verify that contacts resistance is of a few ohms and not in the order of Kohms or, worse,  Mohms.

Initially I tried Your very same procedure, but, if IPA is not well and fully evaporated and the single contacts fully functioning, the keyboard behaviour is the one You describe, with multiple random charactes appearing on the screen at each keypress.

That in my opinion is due to the fact that IPA is in fact conducting in each switch, even if in the few Mohms resistance, and that, when You fully press a key , current flows not only in the single switch part of the  matrix but flows also (through IPA) in other parts of the matrix, misleading the keyboard controller. What You need is to work one switch at a time as I explained above.

My keyboard is now magically working.

Here is my Apple part n. 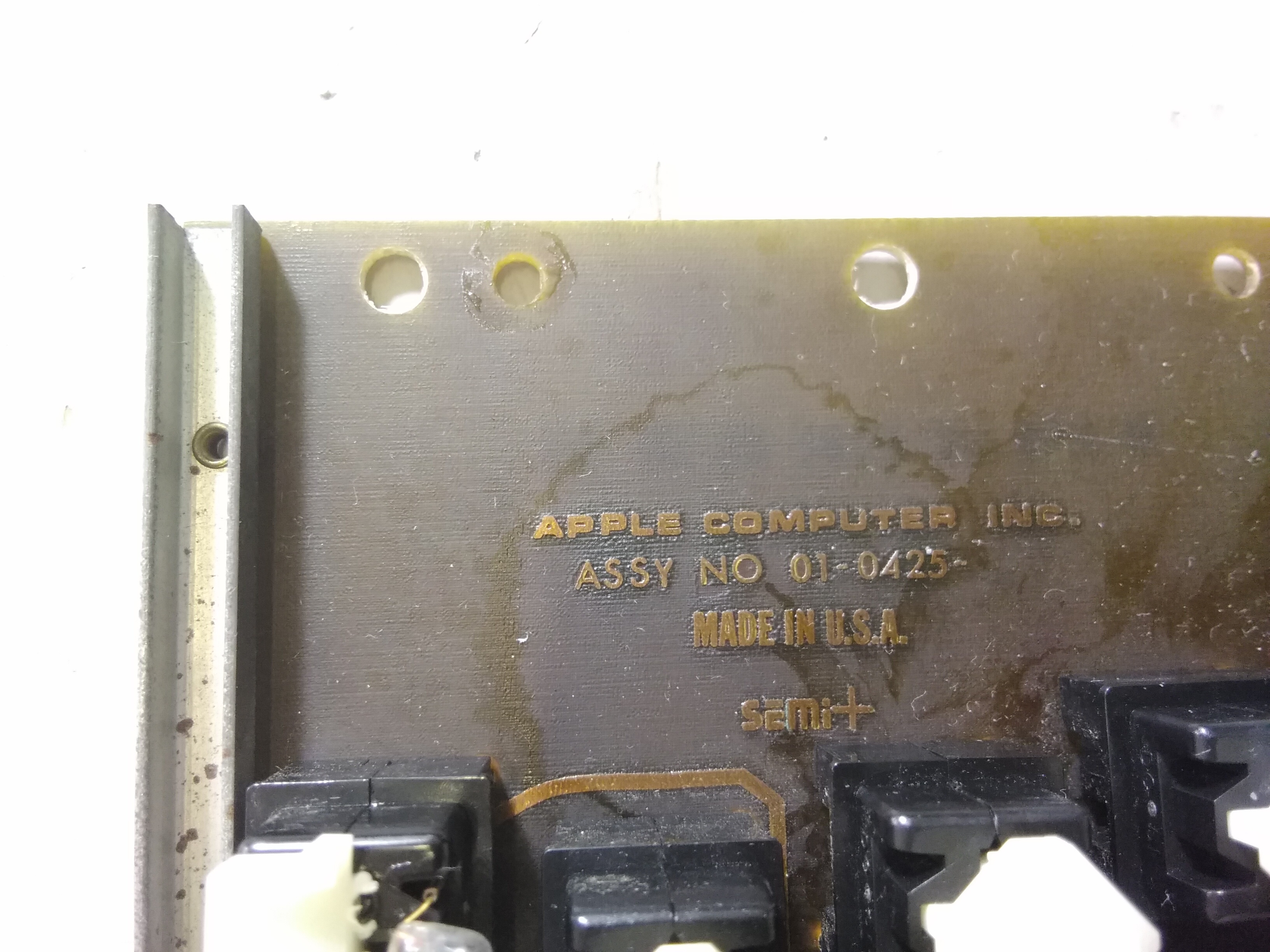 initially I thought the same thing as the signal with paper clip was the one character and the signal from key was a little resistance had multiple variety, but the keys have had time to,dry,  then after Imreplaced the 555 maybe not related the paper lip then had the same response. My only solution at this point is to remove and test the chips again, this time installing sockets. And then if that doesn't provide results then the character generator and then the encoder chip. I chose to bite the bullet and go reactive micro foe the actual chip and not reproduction.

incidentally I'm restoring an Apple J-plus that has the very same keyboard.

About the switches themselves, these are Datanetics DC-50 series switches (mine are Dc-51) that are best described here: