I'm in the process of reverse engineering a "mystery" serial card. This is a card from the early/mid 80s driving an original ImageWriter needle printer: 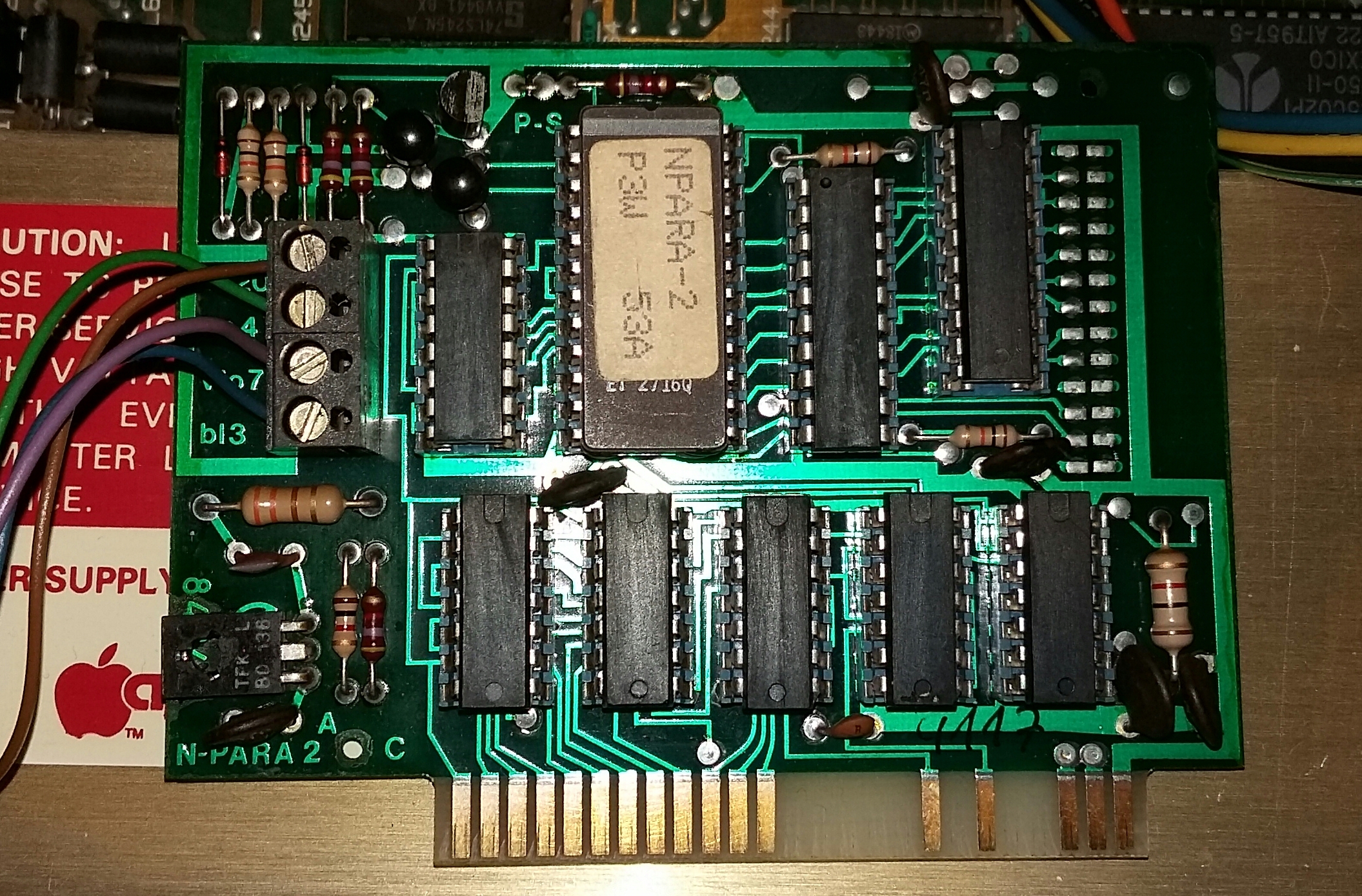 It's emulating an Apple Super Serial card, however, it only supports output and a fixed baudrate and uses simple software controlled "bit banging" to create the serial bit timing. All it needed was an EPROM, a few basic logic chips and three transistors. All chip markings were wiped, however, it's still quite clear how it works. This obviously was a cheap I/O interface replacement to connect an ImageWriter.

The PCB mentions "NPARA-2" as a card name, but no manufacturer. The EPROM contains German error messages (when the printer is not ready) and also contains a copyright referring to a German name (R.Drenske). Might refer to a small electronics company in Cologne, which existed in the 80s - not sure.

Before I dive any deeper into its ROM: are there any other known serial (printer) cards for the Apple II which used simple bit banging and were "output only"? I wonder whether the hardware was an original design or maybe simply a clone of another card?

I have had this card since the 80s (well, my father did then... ;-) ). What has always bugged me was that printing graphics sometimes wouldn't work. As a kid, I noticed it helped to change a few pixels whenever something wouldn't print properly.

Some 35 years later, I have confirmed my suspicions and found the cause: there is a bug in the EPROM, so a specific two-byte escape sequence is misinterpreted when it happens to be part of raw binary graphics data to be printed. So any graphic containing those bytes won't print. My intent is to burn a new EPROM fixing the issue - and finally setting things straight after so many years...

Properly fixing it requires a bit more reverse engineering the ROM though. So, before I dive deeper: are there known cards using a similar concept (so I could maybe copy another/better ROM)?

There is an Apple card similiar to this one:

There was also a Centronics card called N-PARA2.

There was also a Centronics card called N-PARA2.

yep, so the initial simple Apple Serial Card also used "bit banging". The actual HW design is quite different though. Not only the (larger) ROM but also the way the serial bit is written to the hardware. So the NPARA2 clearly is not a simple clone of this one.

Did I get this right: you also have a serial card "NPARA2" with a different ROM version? Also to connect a printer? Do you have a way to dump and upload the ROM? "P4W 569" could easily be a newer version (and maybe one that already fixes the graphics bug...)

I've got this card some months ago, and I didn't used it til now. I just saved the EPROM.

It's quite an amazig forum. I posted a question about an almost 40 year old strange German printer interface card, which seems not to be mentioned anywhere on the internet so far. And within a few hours someone is able to provide a dump of a newer (or slightly different) version of a matching ROM - which he happened to find in a box some months ago... :-)

Haven't checked yet what exactly differs with Ralf's ROM and whether it already fixes my occasional bug when printing graphics data. But I'll give that try...